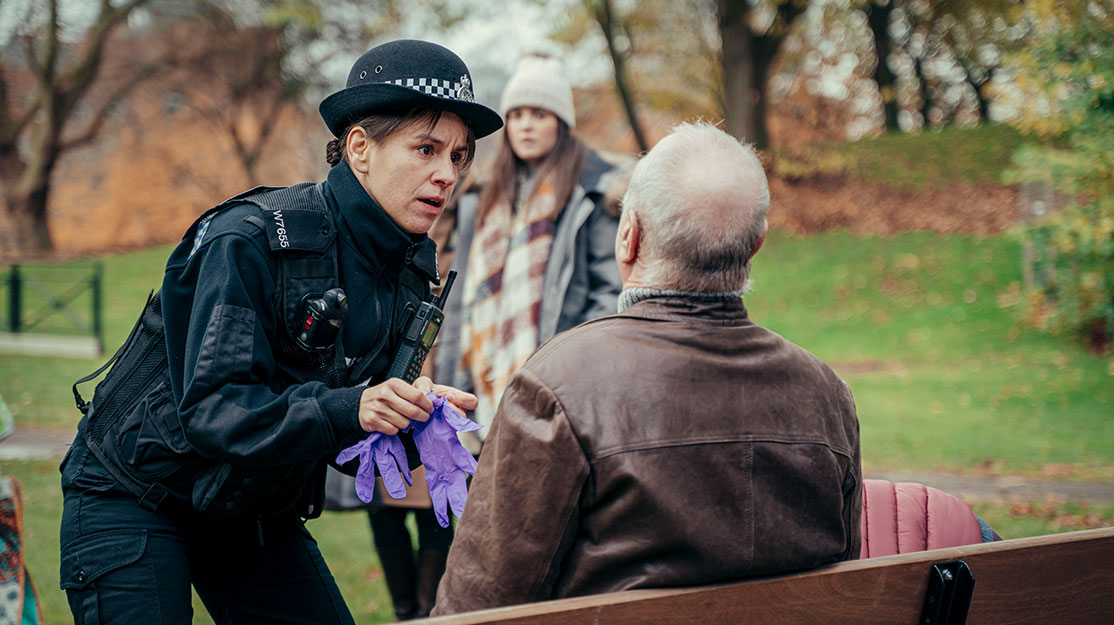 Two years after a deadly poisoning involving a nerve agent in the UK, the cast and creative team behind BBC miniseries The Salisbury Poisonings reveal how they dramatised this real-life national emergency.

When it came to bringing to television the true story of how a father and daughter were poisoned in the English cathedral city of Salisbury, executive producer Laurence Bowen knew exactly how it should be told.

“We decided to approach this as a factual drama rather than a documentary because we felt drama would give us more freedom to explore the emotional reality of what happened to people — showing the audience how it felt to suddenly find yourself with personal responsibility for protecting the lives of Salisbury’s 60,000 inhabitants, or the reality of how it felt to be poisoned, or to be a neighbour and best friend of the Skripals and find yourself catapulted into the middle of a counter-terrorism enquiry,” he tells DQ.

“We wanted the piece to be experiential and to show the truth of how the chemical nerve attack was experienced on the ground by ordinary people, and to show how many of them responded heroically to the challenge.”

Just two years have passed since former Russian military intelligence officer Sergei Skripal and his daughter Yulia were targeted with the deadly Novichok nerve agent. But if you think you know what happened, Bowen and the cast and creative team behind three-part BBC miniseries The Salisbury Poisonings are asking viewers to think again as they tell the story of what happened in March 2018 from the perspective of those tasked with protecting the community.

Turning the spotlight on the ordinary people and public services who displayed extraordinary heroism during a national emergency, writers and former BBC journalists Declan Lawn and Adam Patterson say they didn’t want to do “the obvious thing,” which would have been to make an espionage drama.

Patterson admits that building trust with the real-life characters in the drama is not easy. “The first thing I would say is that factual drama is not a game. If you take on a factual drama, especially one that represents such recent events, you take on a massive responsibility to do those people justice and to tell their stories with authenticity and sensitivity,” he explains.

“We started much like we did when we made documentaries, walking around on rainy nights in Salisbury. It took a lot of time and many meetings over many months. Trust is the key word because, without trust, this project would not have happened.

“If people don’t don’t see your vision, if they don’t trust what you’re going to do with their testimony, they’re not going to talk to you. That consultation with the real people continued through the whole drama, from restarts, through scripting and through production. That’s why it is now an authentic and powerful piece of work.”

At the centre of the drama is Anne-Marie Duff as Tracy Daszkiewicz, the director of public health for Wiltshire County Council, who is called in by the police to ensure the community is protected from the deadly threat presented by the Novichok agent. It marks the first time Duff (Sex Education, His Dark Materials) has played a real-life figure on screen who is still alive.

“It’s kind of surreal, glorious, terrifying and a privilege all that same time to actually sit beside somebody [you’re playing],” the actor says. “It’s a challenge in terms of performance, because the requirements could be that you do an impersonation, and I wanted to avoid all of that nonsense. I just wanted to try and get the spirit of her. But what it also means is that you have to be so authentic and so true, because there’s someone who can testify against every moment. So you have to do the best job you can possibly do.”

Daszkiewicz was largely absent from the extensive media coverage that followed the incident, a fact that intrigued Duff about the person she would be playing. “When I was sent the script, I Googled her because I didn’t even remember her. There was very little to be found so, for the actor’s inner detective, it immediately whets your appetite. And as a woman, I can’t help but think lots of men in suits were recognised and she wasn’t. Adam and Declan’s scripts… the way they swell her with so much integrity was just amazing and a real gift.”

Duff describes Daszkiewicz’s role in the events as “unimaginable.” Knowing she would be the fall guy if anything went wrong – with the potential for thousands of victims if other people came into contact with the nerve agent – “she just felt an insane amount of responsibility,” the actor continues.

“It’s joked about in the script – the whole imposter syndrome issue – because she felt that she didn’t have the smarts. People might think she didn’t come from a world in which she was a problem solver on a grand scale, and she had lots of demons, which we all understand.”

Alongside the Skripals, who both recovered from their exposure to the Novichok agent, three other people were affected by the poisoning. Police officer Nick Bailey (Rafe Spall, The War of the Worlds) and Charlie Rowley (Johnny Harris, This is England ‘86) both recovered after spells in hospital, but Rowley’s partner Dawn Sturgess sadly died. Myanna Buring (The Witcher, Ripper Street), who plays her, says she wanted to remind people that Sturgess was a “real human being.”

“A lot of us remember that, in the news. she was described as homeless and a drug addict, [which meant people] dismissed her death as inevitable because of her life choices,” the actor says.

“That simply was not true. Dawn was not homeless. She was not a drug addict. She was a woman who had experienced mental health issues and knocks in life, which I think all of us can relate to. She did struggle with alcohol, but she was working really hard to turn her life around. She had a loving family, a loving partner, children and friends, and her death left this gaping wound in all of their lives.

“She was an innocent person who died because of a failed assassination attempt that was carried out in such a way that thousands of innocent lives were put at risk. What happened to Dawn, it could have been any one of us.”

Behind the camera, Saul Dibb was able to blend his experience of a decade spent making documentaries with his recent fiction work, including The Duchess, NW and Journey’s End. Describing making The Salisbury Poisonings as “the perfect marriage” and a project that is part domestic drama, part thriller, Dibb says: “All of us felt it had the potential to be more than a straightforward docudrama. It’s just extraordinarily surreal.

“It was this amazing, weird thing happening in the middle of this small British cathedral city, where, whether you were directly poisoned or not, everybody became ‘contaminated’ by this poison.”

The production was based in Bristol and the South West of England, with some scenes also filmed in Salisbury. “We did shoot some things there but we drew a line. There was not going to be a recreation of things like hazmat suits or the army on the streets of Salisbury,” Dibb says. “We set a lot of the early, pre-poisoning stuff in Salisbury and then we meticulously looked for matches [elsewhere].” Archive material from contemporary news reports was used to add another layer of authenticity.

Bowen, CEO of producer Dancing Ledge Productions, also admits there were discussions about when to release the miniseries, which foreshadows many of the changes brought about by the coronavirus pandemic, with shops and restaurants having to close and people being told to wash their clothes and hands and wear protective equipment to minimise the risk of exposure.

The Salisbury Poisoning’s final scenes were filmed the week before the UK went into lockdown in March, before post-production work was completed remotely to deliver the show, which debuted on BBC1 last night and continues tonight and tomorrow.

“There are definite parallels between what happened in Salisbury – with the poisoning, the invisible threat, the contagion and the sense of lockdown – and today,” Bowen says. “We were extremely careful, but we felt that, with the story of Salisbury, there’s such catharsis in watching it. In the end, it’s a story about resilience and bravery and, apart from one awful tragedy with Dawn, it’s about people pulling through and coming out the other side. We felt, for all those reasons, it was timely to show it.”

That the real-life incident drew attention outside the UK means distributor Fremantle is confident the miniseries will also interest international audiences. “This series is based on true events that made headlines around the globe. While audiences will remember these headlines, they will learn a completely new side: the story of ordinary people who became heroes overnight,” says Jens Richter, Fremantle CEO of international.

“International broadcasters have been incredibly impressed by the series, which has been told with upmost care by our partners Laurence and Chris [Carey] at Dancing Ledge.”

Filled with tension as Daszkiewicz tries to contain the threat while other characters are unknowingly contaminated by the poison, the drama’s main objective is to “get under the skin of a group of people who were collateral damage to this extraordinary event,” says Dibb. “The key thing is this is a story that I don’t think can be easily pigeonholed into one thing or another. That’s one of its great strengths.”