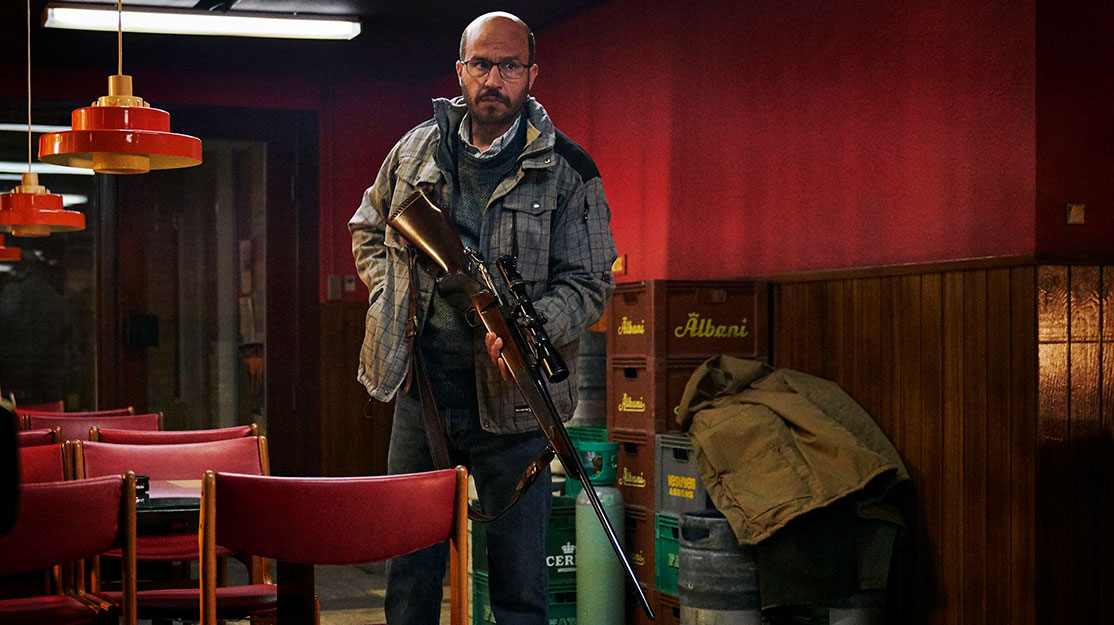 From the writers and producer of Danish dramedy Rita comes Fred til Lands (Deliver Us), which tells the story of five people who decide to plot a murder. DQ goes behind the scenes to find out how this thriller, once developed for the US, made it to screen.

The journey to bring Danish thriller Fred til Lands (Deliver Us) to the small screen began more than a decade ago, when writers Christian Torpe and Marie Østerbye first developed the story of five normal people who, pushed to breaking point by the town bully, team up to plan his murder.

But 10 years is a long time in television, and before Forbrydelsen (The Killing) and the Nordic noir wave flooded Europe and beyond with their dark plots and moody landscapes, the writing duo were encouraged not to pitch their idea for fear viewers would find it too grim.

“Marie and I had only done comedy back then. So people just looked at us weirdly when we were talking about this show,” Torpe recalls. He had been living in LA for a couple of years by then, so took the series out to networks stateside. It landed first at Showtime and then AMC, before both cable networks passed it over.

Then when the Rita creator teamed up with that show’s producer, Jesper Morthorst, to launch Copenhagen-based Motor Productions, he bought back the rights and they took the project to Danish public broadcaster DR.

Torpe continues: “We knew they had an open slot in their schedule and we were like, ‘Hey guys, there’s something here that’s pretty far along in development because of its history. We have a script, we have a full bible. We know what the show is. Marie and I are available…’ and DR just jumped on board pretty much immediately.”

The story first originated from discussions between Torpe and Østerbye, who has also written on Rita, about how easy it appeared to get away with killing someone in film and television, leading them to consider how a group of people might plan and execute the perfect murder.

“There’s a natural conflict and a natural adversity that needs to be overcome that lends itself well to drama – the practical aspect of it but also the moral and ethical aspects of it,” Østerbye explains. “Then you could discover what happens to people when they cross to the dark side and they decide to take a life, and the bonds that creates. It was also fun to create characters and relationships in that sense.”

Deliver Us stands out as a risky prospect for DR, which has built its international reputation on the back of gritty and grounded crime dramas like Forbrydelsen, Broen (The Bridge) and Bedrag (Follow the Money). As well as being more heightened thematically and stylistically, through the design of lead director Louise Friedberg, it also came to the broadcaster from outside its own development system, unlike the aforementioned hits. That’s not to say it was entirely fully formed, however, with some rewriting required to transplant the plot from the US to Denmark.

“When you place it in a Danish community instead of a small US town, that does something to the show. It’s a different culture,” Torpe notes. “People have a different relationship with violence and guns and everything. So we redeveloped it for Danish purposes. That said, I do think it’s a new kind of show for DR. It’s not aiming for the realism we are used to seeing in their shows. It’s still grounded in real people in real emotional psychology, but it is slightly – maybe just 10 or 15% – heightened.

“The story finds that extra gear that takes it away from realism, and the visual style doesn’t aim for realism either. It’s much more expressive. Louise has crafted a beautiful style. To me it has a layer of [David] Cronenberg’s A History of Violence or Eastern Promises, or The Coen Brothers’ thriller-noir world. It’s in that universe.”

Fans of Rita, the story of an unconventional teacher and single mother, may also recognise elements of dark comedy in Deliver Us, which distributor Dynamic Television has already placed with Germany’s ZDFneo. “The whole idea of ordinary people finding out they want to kill someone has a sort of absurdity to it,” Østerbye notes. “This doesn’t happen [in real life]. I don’t think Christian and I can work without any type of comedy in our scripts, but we both also wanted to do something that was more dramatic.

“As I remember it, there was a bit more religion and a bit more church-going in the American pilot – we had an opening scene where the whole town was at church. You don’t get that in Denmark, so that was something we had to change for the new setting.”

The story follows the citizens of a fictional small town who band together to plan the murder of troublesome resident Mike, who is terrorising and tormenting them in different ways. It also focuses on the human cost of such a plan, exploring why each member of the group decides to kill and how that choice affects them.

The ensemble cast includes Claus Riis Østergaard (Norskov) as town doctor Peter Dahl, who is still grieving the death of his son, Aksel, who was deliberately run over by Mike. The villain gets away with murder by claiming it was an accident, leaving Peter to take justice into his own hands.

Lene Maria Christensen (Pros & Cons, The Legacy) plays Bibi Lorentz, who desperately wants a child but whose husband has stopped having sex with her. Bibi doesn’t know why until it is revealed that Mike is physically and psychologically torturing him. “So the guy is ruining her life not by directly threatening her but by stopping her from achieving her dream,” Torpe explains. The cast also includes Dar Salim as Milad Aziz, plus Anders Juul (Peter’s brother Martin Dahl), Mads Romer (John Nielsen) and Marijana Jankovic (Anna Nielsen).

So far, Mike sounds pretty despicable, but it was important to the writers that the character, played by Morten Hee Andersen (Ride Upon the Storm), didn’t just appear as a pantomime villain. As such, they had extensive discussions about how to ground the character to ensure he still felt real and relatable to the audience.

“I’ve been using the words sociopath and psychopath but we actually stay clear of that when we talk about him on set and with Morten because we want him to have some traces of humanity,” Torpe explains. “We talked about him as a broken human being who never learned any kind of emotional language whatsoever. Then, throughout the season, things happen where we slowly see him becoming a human being and we start adding different flavours and grey zones to him. That’s going to be a fun part of the show – to start having the audience see him in different ways. We get to see where he’s coming from and we get an idea of what shaped him, what his environment is and how he became who he is.”

Writing the series was really an exercise in justification, with Torpe and Østerbye devising reasons that would lead this band of disparate characters to want to team up to kill Mike – and, most importantly, to make the audience get behind them. “So it started off with a morbid brainstorm about what this guy could have done that would make your audience want to root for our group,” Torpe says. “Based on that, we started developing relationships and characters with the wants and needs that Mike was somehow hindering. Sometimes he’s a very physical threat; in other cases, he’s more of a mental roadblock.”

The eight-part psychological thriller reunites co-showrunners Torpe and Østerbye, who have known each other for 20 years, first partnering on comedy Maj & Charlie before working together on Rita.

That shared history has created a shorthand between the pair that has carried them from the writers room to the editing suite. Both admit they are spending more time overseeing the edit than might be traditional for Danish drama writers, but with three directors working across the series, they see it as an important part of their role in delivering a shared vision for the series.

“There are a lot of decisions going on in the edit, where you can suddenly decide to do a scene without the dialogue because the actors give you what you wanted without saying anything,” Østerbye says. “There are also a lot of discussions around pace, mood, music and all kinds of things you can’t really imagine when you’re writing. We have to discover the tone of the show, and we have often changed the point of view of the scene in the editing room. We sometimes decide to tell it through another character, and we can do that because the directors capture a lot of material and shoot the scenes from different angles. So we’re able to kind of make these changes as we go along.”

Throughout the story, however, the one constant is a single underlying question: even if you get away with murder, how do you live with your actions?

Speaking to DQ as filming is about to begin on the third block, Torpe says: “The thing we’re still working on is finding the appropriate mix of hope and despair in the show, because the characters need to be in deep despair to commit – or attempt to commit – something so radical. But at the same time, we need to have hope for them that they will actually get better, otherwise the audience will become disengaged. So the main challenge in this show, and what makes it fun and interesting, is finding that mix of light and dark – finding little moments of humour here and there, finding hope for the characters.”

Behind the scenes, producer Morthurst was tasked with identifying the perfect setting for Deliver Us. Filming has subsequently taken place entirely on location, with the show’s fictional town made up of three places on Funen, Denmark’s third largest island, located south-west of Copenhagen. The setting takes the name of one of those towns, Ebberup.

“We only have one set, which we built into a cafeteria. Everything else has been shot at authentic locations,” Morthurst says. “That’s a lot of work when you’re shooting for six months in places where people are living. It’s a big logistic puzzle.”

The decision to create a composite fictional town for the series goes some way to making sure the programme portrays a recognisable yet distant place where this exploration of human behaviour can play out.

“Deliver Us is completely realistic in its exploration of how it is to be a human being and how people relate to each other in small communities – and what we do with that one person who is fucking things up for everybody else,” Morthorst adds. “That’s not something we are used to seeing in Danish television. We are doing our best to get the audience close to the characters and the drama.”