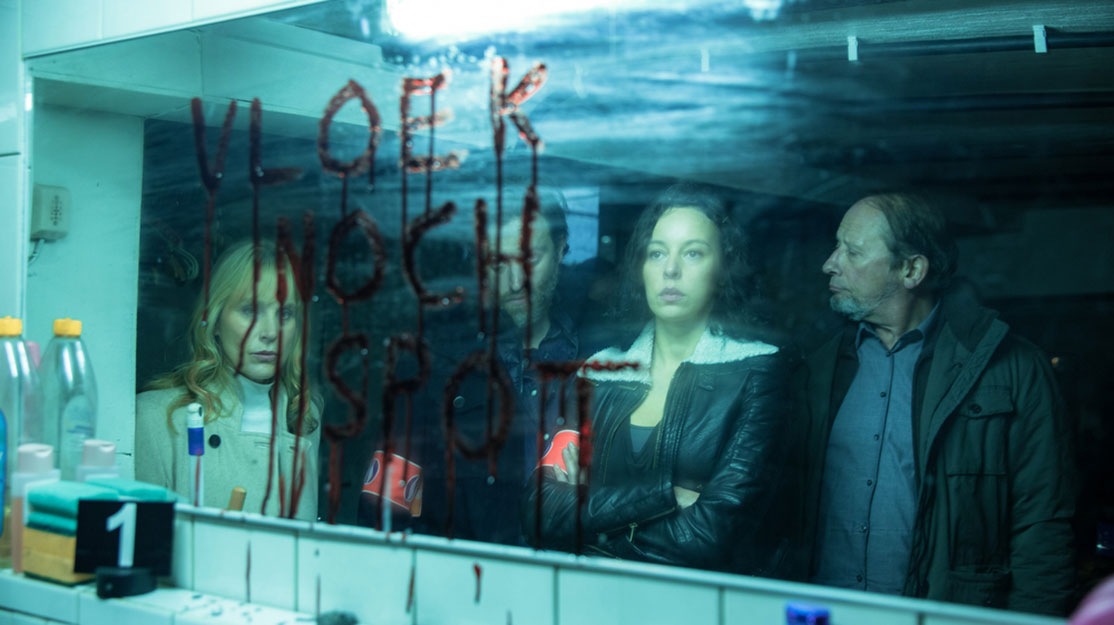 A Belgian drama inspired by the Ten Commandments sees a modern-day Moses commit a string of gruesome crimes. DQ leans more about the series – 13 Geboden (13 Commandments) – from director Maarten Moerkerke.

The story of Moses is no stranger to screen adaptations, but 13 Geboden (13 Commandments) takes the Biblical tale and gives it a grisly modern-day twist.

The Belgian series follows a string of horrendous crimes committed in an apparent attempt to lift society out of a state of immorality. Meanwhile, a soon-to-retire police officer and his ambitious young partner get caught up in the impossible hunt for the perpetrator, who becomes increasingly popular despite his cruel retribution for the people he believes have sinned.

Produced by Menuen for Flemish broadcaster VTM, the show is distributed internationally by Canada’s Attraction Distribution. It is due to air next year.

Here, director Maarten Moerkerke, who was also part of the writing team, tells DQ more about the series, his role in its development and how the show reflects the excesses of modern society.

What is the story behind 13 Commandments?
Maarten Moerkerke: Inspired by the Ten Commandments, a modern-day Moses starts committing a series of gruesome crimes in order to jolt society’s conscience and restore its moral values. The fact that he can’t kill anyone (the Fifth Commandment) doesn’t inhibit him to punish determinedly and fiercely. The seemingly impossible hunt for the perpetrator is led by Peter, a 60-year-old inspector who just returns from a career break due to a burnout, and Vicky, a rookie inspector who had to leave the SWAT team after a car accident that left her mother in a coma. As the investigation unfolds, Moses gains popularity, despite the atrocity of his crimes,  and then they catch him – or at least they think they do.

Why did you join the project?
I only got involved as a director late in the process of development but I immediately liked the idea very much, as I saw the possibilities to refer to our contemporary society, its growing populism and the anonymous cry for instant justice on social networks and in online comments on popular news sites.

Why do you think this series stands out among the number of other crime dramas on television?
The originality lies within de development of the story and the characters. It starts out as a regular, almost cliché, crime drama: an older cop, a new younger, female colleague, a serial criminal… And, of course, there’s the obvious conceptual link to the movie Seven, to which one of the cops refers at a crime scene. But as the story evolves it becomes much more complex. There’s the unpredictable path of the crimes, their impact on the personal lives of Peter and Vicky, who have their own crosses to bear, and how it all melts down. It’s not a typical whodunnit story but rather it becomes the tale of two people who try to catch a criminal who confronts them, through his crimes, with the mess in their own personal lives.

How did you influence the development of the series?
When I first read the drafts, they were much more predictable and almost formatted, tackling one commandment per episode. The focus was on ‘Moses’ and the complexity of his crimes and, above all, it was constructed as a whodunnit. I convinced the network that it wouldn’t work, certainly not with 13 episodes, as viewers would get bored. So we changed the focus from Moses to Peter and, more importantly, Vicky. We almost recreated her with a different background, less clichéd and with much more depth. That gave us the tools to tell the story in a much less predictable way. Another huge turnaround was that the viewers know, well before the end of the series, who Moses really is. This knowledge gives the last episodes a real boost as the story shifts into a totally different direction.

What is the message behind the show and how does it reflect or mirror contemporary society?
Moses’ acts automatically imply a certain view of contemporary society, as his crimes point out that certain values are diminishing or have completely vanished. First of all, Moses is not a religious fanatic; he uses the Ten Commandments rather as a cultural, widespread reference – a manifest, so to speak. He wants to give the public an easy, well-known explanation for his deeds. And furthermore, most of the Ten commandments are still a moral code, even for atheists – no killing, no lying, no adultery, honour your parents, no stealing, honesty… So he may have a point that some of these moral codes have been hollowed out in our modern times where people store their parents in care homes, work seven days a week and try to survive in a world that seems to turn faster than ever.
As sane people, we can never accept his violent reaction to this so-called moral depravation. But what if he proves beyond any doubt to the general public that someone who’s leading a normal lifeis an active paedophile? And what if that reveal sparkles a medieval witch hunt? And so we’re back at the instant cry for ‘justice’ on social media. Populism and right-wing politics have never been so popular.

How would you describe the writing process?
We did a thorough makeover of the original scripts with a new team of four writers. We only had four months until the start of the shoot, so it was quite hectic, as I prepared the shoot as a director and at the same time co-wrote the shooting scripts. We all knew what had to be done, and although we didn’t have all the shooting scripts by the start of filming, everyone at that time – cast, crew, production and the network – had enough confidence in the project, so the shoot was intense but rewarding.

Tell us about the lead actors.
Peter and Vicky are played by Dirk Van Dijck and Marie Vinck. I had previously worked with Dirk and when the project was proposed to me, I contacted him immediately. He was my only option to play Peter. It didn’t take long to convince him, although we had long discussions about his character and the direction I would take in the rewrites of the screenplay. But there was faith and friendship. I knew it would be a huge task for him but he took it very seriously – he even lived for five months in the town of Aalst, where we were shooting – and he delivered tremendously.
As for Marie, it was more complicated because Vicky was completely different in the original screenplays. I really had to convince her that we would transform her character completely in a more gripping, compelling way. But once she was in, she lived to the job and played Vicky exactly as I imagined her.

Is there a way you like to work with actors, either in rehearsal or on set?
On 13 Commandments, there really wasn’t much time to rehearse as I was still writing during preproduction. But we had open discussions about the characters, and the advantage of the ongoing writing process was that I still could shape the characters or the scenes till the last moment. There was a lot of trust during the shoot, for which I was very grateful, although it was a huge responsibility at the same time. We even did scenes from the last episodes without any script or context. We all just leaped – it was scary but it felt right.

How did you create the look of the series?
The network insisted on a look that wasn’t too dark, literally, but that was never our intention anyway. Anton Mertens, the DOP, suggested a dirty look in which we wouldn’t hide anything in the darkness but rather show it all, albeit in a very explicit, stylised light. We both loved the photography in Anton Corbijn’s A Most Wanted Man. The combination of warm and cold light in one composition would be something we would use a lot. Mertens really did a great job in creating the right atmosphere for a society, or rather an environment, where our Moses could thrive.

Where was the series filmed and how did you use real locations within the show?
The series was originally set in Antwerp but I relocated the shoot to Aalst, a smaller city with fewer landmarks and a very specific vibe. It has a more industrial character with a factory in the centre of the city – a very visual concept that fitted our view of Moses’ society. We shot the whole series, with a few exceptions, over there and used mostly real locations, or we constructed sets within real locations.

What are you working on next?
I am finishing the series I shot right after 13 Commandments. It’s called The Gang of Jan De Lichte, a story that takes place in Flanders around 1740. In between, I also shot my first feature, Verborgen Verlangen, a feel-good movie that will be released this month.