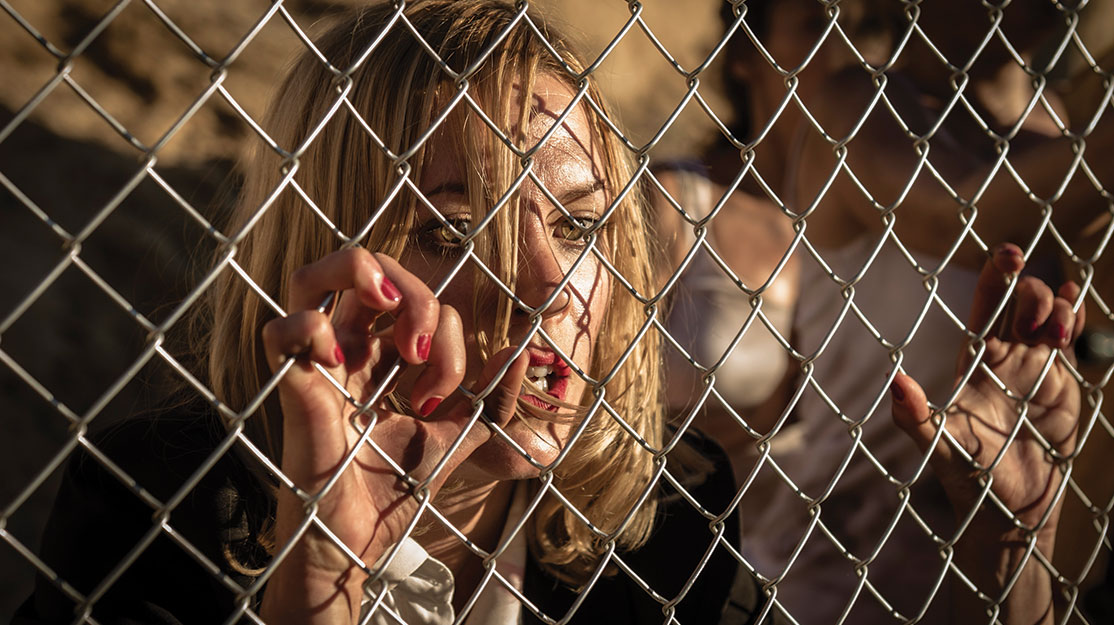 As Prison Break returns to television after an eight-year absence to bolster the line-up of jail-set dramas on air, DQ explores why viewers love to lock themselves up with convicts.

Television drama has the power to transport viewers to exotic new worlds, turn the clock back to visit the past or fast-forward to futuristic fantasies.

But there’s one location in particular that can be a hotbed of action, thrills, drama and romance, despite being a less-than-salubrious setting.

From Australia’s Prisoner: Cell Block H and Bad Girls in the UK to German soap Hinter Gittern –Der Frauenknast and French Canada’s Unité 9, prison dramas can send audiences to a place full of intrigue, yet one most people hope never to visit in real life.

The return of US drama Prison Break to Fox early in 2017, eight years after the last season concluded in 2009, bolsters a trend that suggests viewers can’t get enough of life behind bars and the diverse cast of characters who are forced to eat and sleep together in decidedly close confines.

One of the biggest prison dramas of recent years has been Orange is the New Black, the Netflix original series that debuted in 2013 and now comprises four seasons. Created by Jenji Kohan and based on Piper Kerman’s memoir of the same name, the show is set in the all-female Litchfield Penitentiary and has proven such a hit for the streaming service that, in February this year, it placed a three-season order taking the show through to 2019.

Disclosure of viewing figures has never been Netflix’s strong point, but that massive commitment points to Orange is the New Black being among the platform’s biggest hits. Similarly, Penny Win, head of drama at Australian pay TV broadcaster Foxtel, described the network’s own prison drama Wentworth as a “ratings blockbuster” when she confirmed it would be back for a fifth season in 2017. Wentworth also airs in 141 countries around the world and has spawned remakes in Belgium (Gent-West), Germany (Block B – Unter Arrest) and the Netherlands (Celblok H).

Also set in a women’s prison, Wentworth was conceived as a contemporary re-imagining of Prisoner, which ran on Network Ten down under between 1979 and 1986. The new series, which debuted in 2013 on Foxtel’s SoHo channel, focuses on Bea Smith (Danielle Cormack) as she is forced to learn how to survive in the eponymous prison.

“A prison is a hothouse for drama because it’s such a concentration of story,” says Jo Porter, FremantleMedia Australia director of drama and Wentworth executive producer. “People have broken the rules and why they break the rules is often interesting. They’re having to face the consequences of their choices and they cannot escape them.

“In Wentworth, you enter another world through Bea Smith. You cannot help but think, ‘How would I cope if life had dealt me a different hand?’ We take the audience by the hand with these different women. There are archetypal big characters – they are recognisable and that’s why as an audience we care for them.”

Wentworth writer Marcia Gardner continues: “A prison drama is a safe way of delving into an unknown, dangerous world. It’s also a microcosm of any society – but within a confined space, everything’s heightened. It has the potential to be a powder keg of emotion. That’s why it has the potential for drama.”

Like the prisoners, writers on these shows also find themselves locked up within the confines of the prison grounds, unable to escape into the world that surrounds them in terms of story. But the revolving prison door serves as a perfect way to say goodbye to some characters while also introducing new ones.

“We don’t have the outside world, we’re in a confined space, but one of the virtues of Wentworth is the cast can come and go and we can bring in guests,” Gardner notes of the series, which is distributed by FremantleMedia International. “People get released; people get convicted and come in. There’s a means to refresh and bring interesting people in. We have quite a large core cast compared with most shows – there’s up to 74 main cast members, so there’s always something going on because we have got to make sure everyone has a character arc or story.”

If Litchfield’s orange or Wentworth’s blue jumpsuits don’t appeal, how about yellow? Inmates featured in Spain’s Vis a Vis (aka Locked Up, pictured top) must don the brightly coloured outfits when they join the population of Cruz del Sur prison.

The show follows Macarena (Maggie Civantos), a young woman who commits tax fraud and must quickly navigate the emotional shock of being in prison and the complicated relationships among the inmates. It is produced by Globomedia for Antena 3 and distributed by Imagina International Sales.

With Breaking Bad among his inspirations, co-creator Alex Pina says a prison is the perfect setting for a television thriller: “A prison is supposed to be too rough a place for many other things but it is perfect for a thriller. No character can ever be certain they are safe from every other character.

“And creating those characters is a richer process when they are in prison. They are not normal people going to buy bread or walking to work. They are criminals, murderers and thieves. They speak and behave very differently from an ordinary citizen and this is very interesting from the perspective of writing – and it’s also very entertaining.”

While some prison dramas are entirely confined behind bars, others – including Orange is the New Black, Vis a Vis and HBO’s recent hit miniseries The Night Of – give viewers considerable time on day release. The same is true of Icelandic series Fangar (aka Prisoners), in which a woman is convicted of the attempted murder of her father. She is sent to a women’s prison, where she harbours a dark secret that could tear apart her family – including her politician sister – and set her free.

“Originally it was just a prison series but as it developed, it became more of a family drama,” director Ragnar Bragason says of the show. “The women’s prison is not a standard prison – it’s the only women’s prison in Iceland and only holds 10 or 12 inmates at once. There are no uniforms and they make their own meals and watch TV together. It’s more like a dysfunctional family than a prison but it has the same hierarchies and violence.

“I wasn’t interested in doing a strict prison drama. What was interesting was to go into the world of politics, society and power and to mix that with the other aspect of the prison and criminal justice system. The dynamic of the series is the friction between the two.”

Work on the show, which is produced by Mystery Productions for RUV and distributed by Global Screen, included 30 days filming at the prison, which presented its own challenges.

“We expected it to be nice and easy but it was so small,” admits producer Davíd Óskar Ólafsson. “We had so many crew members – by the end, everyone was pleased to be released. But we were extremely lucky to use it. The prison had been closed down because they’re building a new mixed prison. We remodelled it a little bit and kept it close to what it was. It made a huge difference that we didn’t have to build it or make another location look like a prison.”

However, Wentworth producer FremantleMedia Australia had to build that show’s set from the ground up, not once but twice, as production moved to a new location at the end of season three. “It’s quite claustrophobic when you get in there,” reveals production designer Kate Saunders. “The cells are quite small because they are in reality. We’ve had to be quite inventive with the camera ports and walls that float. There are lots of bits of the set that float [to allow cameras in]. We certainly learnt as we went along.

“There’s not a lot of things we can dress on the walls to make it interesting so we used lots of textures with brick and concrete render. It’s not like you can hang up a picture or add wallpaper. We used strong colours – dark greens, greys and blues – to suggest different areas. We don’t have a lot of outside light so everything is very enclosed. The prisoners cannot see outside, except if they look up at the sky, and we cannot see inside.”

Much like in period dramas, props in prison series must be extremely specific, as Saunders found out when she first tried to dress the Wentworth sets. “Everything they have inside a prison is up to certain standards – like the phones, they’re much more solid – and everything is anti-ligature so prisoners can’t hang themselves,” she explains. “It was difficult when we first started because the people who make those items wouldn’t talk to us until we got the greenlight from [government department] Corrections Victoria.

“They also have special cigarette lighters that don’t have an open flame and specific speaker grills and intercom points. It’s a whole new world of stuff you didn’t know existed. But once we got in, most people were so lovely – it’s been fantastic. Once you open up that world it’s amazing, but you have to find it.”

You’ve probably noticed that this feature has overwhelmingly discussed dramas set in women’s prisons as opposed to men’s. So why is it that, with the exception of Prison Break, The Night Of and HBO’s groundbreaking drama Oz [see below], prison dramas tend to focus on female incarceration? The reason, it seems, is universal.

“When we were doing research, the prison guards we spoke to who had worked in both male and female prisons said that, physically, male prisons are stronger and there’s violence,” Ólafsson says. “But, mentally, female prisons are much rougher. They said it’s more difficult to work with women who have lost their kids – and in Iceland the prison was actually next to a kindergarten.”

Similarly, Wentworth’s Porter explains that why male battles are physical, women use psychological games to gain the upper hand: “They’re hard to control and manage and are more unpredictable. The truth of that is what’s so fascinating. Many of these women have been given a tough hand from their circumstances so they have to choose how they’re going to defend themselves and it’s a real defining time in their lives. It’s great fodder for high-stakes drama.”

With Orange is the New Black and Wentworth set to run and run, it seems viewers can look forward to a lengthy stay inside, whichever show they prefer.

Vis a Vis’s Pina sums up the popularity of prison dramas when he adds: “At the end of the day, evil bastards, uncertainty and tension, combined with everyday stories of girls with a sharp tongue and constant use of black humour, always seems to work in fiction.” 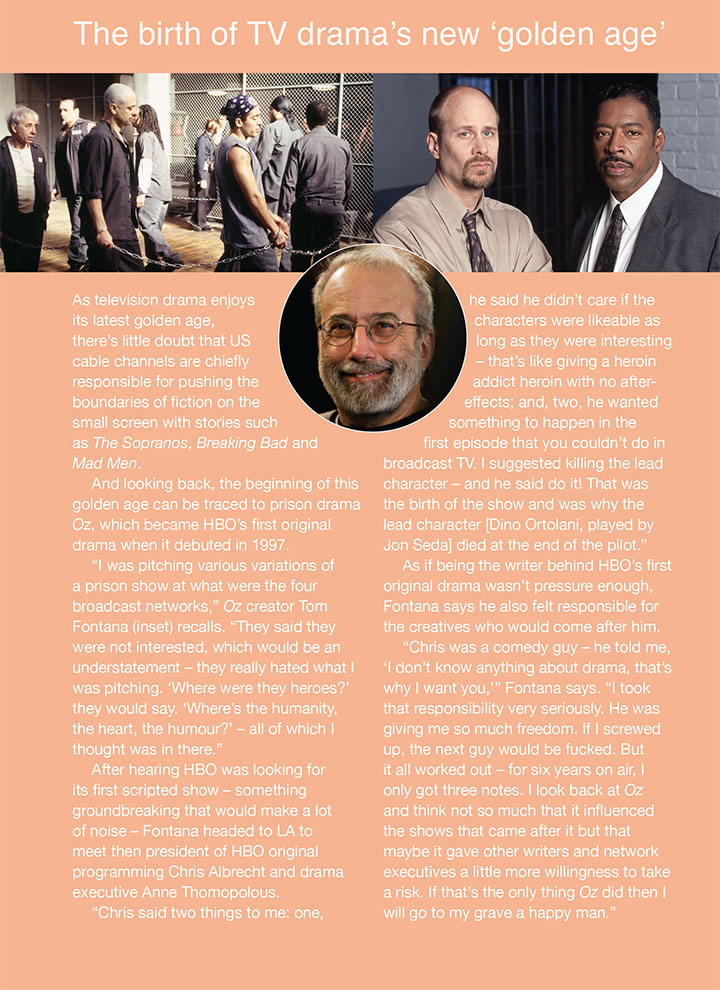