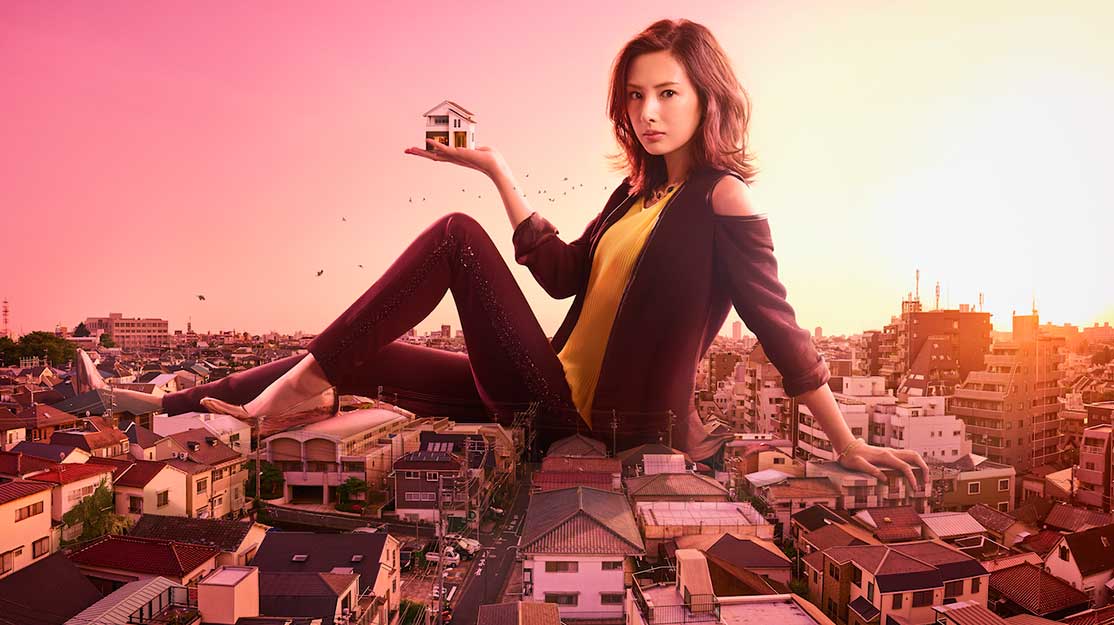 The property business gets personal in Japanese drama Your Home is My Business. DQ speaks to producer Reina Oda about developing the series, which is being remade in China.

The role of an estate agent is to sell homes – but that’s just part of the job for the character at the centre of Japanese drama Your Home is My Business.

Keiko Kitagawa plays Machi Sangenya, a 30-year-old estate agent who becomes involved in the problems of her customers and their families as she bids to close her next sale.

The 10-episode series originally aired on Nippon TV in July 2016, before returning for a one-off special on May 26 in response to fan demand. The follow-up also marked an ambitious leap for the series, including a storyline featuring a Chinese man who wants to buy a home in Japan and a scene in which Kitagawa spoke Chinese.

Speaking to the popularity of the series outside Japan, the special episode simultaneously aired on Nippon TV’s GEM channel in South-East Asia, reaching audiences in Cambodia, Hong Kong, Indonesia, the Philippines, Singapore and Thailand.

In April this year, with Nippon also distributing the series internationally, Shanghai-based production company Youhug Media acquired the format rights with a view to a Chinese remake.

Chinese scriptwriter Liu Liu (Dwelling Narrowness, Calculation) is set to pen the remake and production is slated to begin in early 2018.

Series producer Reina Oda tells DQ how she developed the idea for the original show and explains why the biggest challenge was finding the right filming locations.

Tell us about the story of Your Home is My Business.
Your Home is My Business is an exciting workplace drama with genius real-estate agent Machi Sangenya as the main character. Boasting that “there isn’t a home I can’t sell,” Machi goes beyond the scope of her job and delves into the personal problems of her clients, ultimately finding them a surprising but satisfactory solution.

What are the origins of the series?
Before I became a drama producer, I was a director for entertainment shows [at Nippon TV] and one of the programmes I worked on was Ariyoshi Seminar. It had a segment called ‘Shinobu Sakagami Buys a Home,’ which documented a Japanese celebrity’s search for a house. Your Home is My Business was born out of my involvement with that segment. It became clear to me back then that the process of buying and selling a home was something that could be made into a drama. A home is usually the biggest purchase in life and the segment was entertaining because the celebrity depicted how passionate a person can become when buying a house. It was also a success in terms of capturing the interest of viewers who were not even thinking of buying a home. That led me to believe that a drama would have the same appeal. I think purchasing a house is just as dramatic as being cured of a disease, and I knew many people  would enjoy Your Home is My Business.

How was the show developed for Nippon TV?
I asked the cast members to keep their acting energy levels high to make Your Home is My Business more dramatic. For example, throughout the series Machi yells out “Go!” with her signature glare. I had a conversation with director Ryuichi Inomata about how, in this day and age, it’s difficult to get people to watch a drama series even if you put a lot of effort into the script and production. He then came up with the idea of exaggerating the acting by several notches throughout the episodes. He knew it was a risky move, but we decided to go for it.

How would you describe the writing process?
We interviewed about 30 real-estate agents before the start of shooting. We hired staff that specialise in interviewing these agents to find unique homes and interesting problems and pitfalls that are a part of the home-purchasing process. I also met with the agents and incorporated a lot of the stories they shared into the drama. They particularly enjoyed talking about clients who wanted homes for their mistresses, or properties that had been the scenes of accidents or crimes. In the third episode, there is a client who buys a US$1m home complete with a sunroof for their pet turtle. This was actually a true story. Of course, there are also some parts that are completely made-up, like in the fourth episode when a US$1.5m property sells for double [the price]. But most of the realistic stories are actually based on real life. There were times when we got really absorbed in the scriptwriting process and looked back at our interview notes and noticed things we had not used, like troubles with loud neighbours. The interviews with the real-estate agents enabled us to let our imagination take off.
When I came up with the idea for the show, I was already thinking about the concept of solving family problems through selling the home. In order to work that into the drama, but I needed to research the problems families in Japan face today. I found that there is an increase in the number of middle-aged recluses who hole up in their rooms and refuse to leave. The number of women who are deciding to stay single for their entire life is also growing. Today, there are many married couples who cannot afford their own home but they find living with their parents suffocating, so the folks get them somewhere or they find a place nearby. For the drama, I combined these social problems with issues involving the actual property, such as lack of space, accidents and crime.

What did the director bring to the show?
We made it a point to keep the acting energetic and tried to create a comical effect in a theatrical or manga style. At first I was worried that a manga effect might ruin the flow of the story, so I consulted with Ryuichi. He mentioned the challenge that we, as well as the other broadcasters in Japan, face – despite the hard work that goes into production, it is difficult to get people to watch dramas these days as they air on linear TV. With that in mind, he encouraged me to take the risk and go for it. For example, when you hear ‘whoa!’ during a soccer game on TV, you suddenly get interested, right? We tried to create the same effect. Whenever Machi would yell “Go!” in the trailers, we wanted people to get surprised and end up watching the show. These were all the director’s ideas.

Who are the lead cast members and what do they bring to the series?
From the very early stages, I had Keiko Kitagawa in mind for the main character. Machi has a dignified and larger-than-life presence with looks that are out of this world. I could not think of anyone else for the role besides Keiko. It turns out that in real life she is also pretty straightforward, and she said the role felt quite natural for her. When it comes to work, she has a serious, head-on approach that resembles Machi perfectly.

Where was the series filmed and how did you use the locations on screen?
It was incredibly challenging to find actual real-estate properties to use as locations. In the first episode, a married couple work long hours as doctors in the same hospital. They are worried that their young child is always lonely at home, so they want to live right in front of the hospital and have the kid come out to the veranda to say hi. I had no idea where we were going to find such a home, and I even worried that we might have to use computer graphics instead. But thanks to our hardworking production team, we found an empty home that was right in front of a hospital. It was so perfect that you would think the screenwriter, Shizuka Oishi, wrote the story with the property in mind! I had goosebumps when I actually saw the place, and the cast was really happy we had found it. Looking back, the property we used for that episode was the most difficult to find.
There were times when we filmed on location at empty homes, and also in the studio. We even built sets that you simply won’t find in real life, such as one we used in the third episode that had a staircase so narrow that a fat person would get stuck. At one point, we had about five different types of homes in the studio. There was a time when it seemed like all we did was build and then destroy homes.

What were the biggest challenges you faced during production?
Apart from finding the real-life properties, it was also difficult creating plots in which Machi could solve her clients’ family problems in the process of selling a home. While several solutions to family problems might come to mind, we still needed to tie it together with selling a home, and that required a lot of thought. It was also challenging coming up with different ways of having Machi sell homes. The first script completed was for episode two, which featured a middle-aged recluse. Shizuka suggested that, instead of creating a story where we persuade the recluse to finally come out of the house, we should find a home so that the recluse can be as comfortable as if he were living in a palace. That was when I had a eureka moment. We established Machi as a heroine who thinks outside the box and does not get caught up in preconceived norms. Truth be told, though, it was difficult to come up with every scenario. Even before we created the show, Shizuka had always wanted to write a female protagonist who was unlike the typical Japanese employee who worries about compliance and sugarcoats everything they say, instead going for someone who is frank and straightforward. We were meticulous about developing a character who could say things bluntly without offending viewers.

How would you describe the current state of TV dramas in Japan?
Nowadays, even if you write a good script, put together a glittering cast and film the scenes well, there are times when the show still can’t get a following. In that sense, it’s difficult to analyse the market and draw an overarching conclusion. In terms of viewers, the new ‘Total Viewership Rate’ was introduced last year in Japan, which adds time-shifted [DVR] viewing to the traditional real-time viewing. Viewers who do both are not counted twice. As a result, we are now able to accurately see which programmes are being viewed the most. With internet streaming also becoming the norm, there is definitely a diversification in the way people watch dramas.

Are viewers’ tastes changing in Japan or do the same shows continue to be popular?
It’s natural for viewers’ tastes to change along with the times, so I don’t see the same shows continuing their popularity. For example, ‘trendy’ dramas became popular in Japan from 1988 to 1990 but if we make them now, we probably won’t get a following. [Trendy dramas refer to modern series that depicted urban men and women, their romances and cosmopolitan trends.]
There are many types of dramas in the Japanese market today. Some are so peaceful that there isn’t a single character you can dislike. There are also sordid love-hate stories. I happen to enjoy both. I think the allure of the Japanese drama market lies in its diversity and maturity, and I would be happy if it gets noticed by viewers around the world.