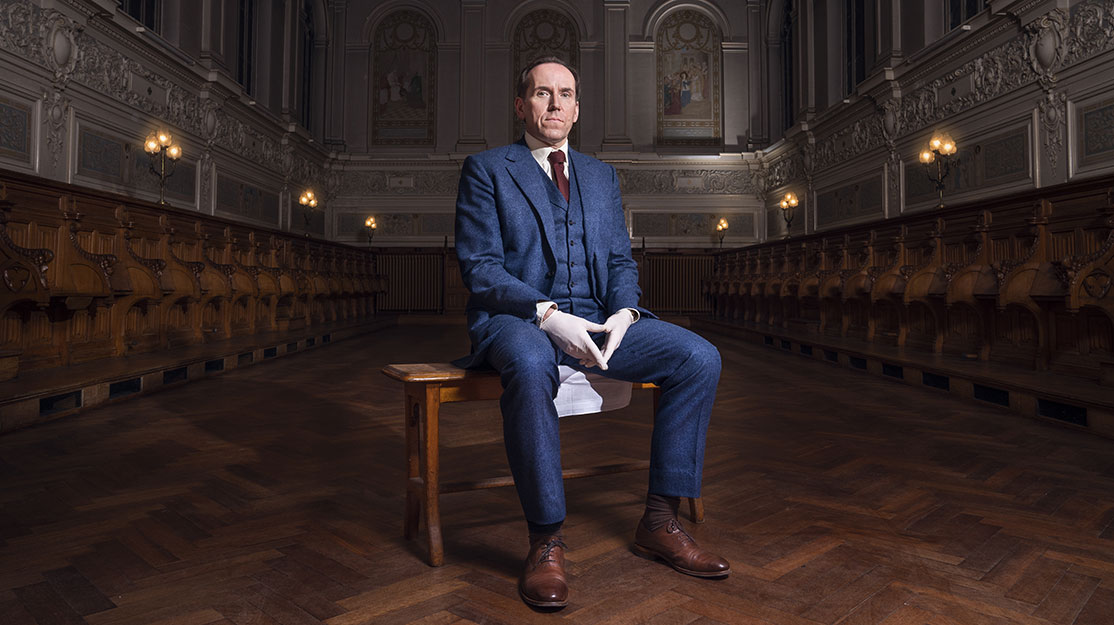 Down to a T

British actor Ben Miller reveals why playing the title character in the UK remake of Belgian crime series Professor T is the part of a lifetime, as he talks about overcoming obsessive-compulsive disorder and his love of European drama.

Ben Miller was already a big fan of the original Professor T before he came on board ITV and BritBox’s remake of the Belgian crime drama. The British comedy star watched the Flemish-language series when it aired on Channel 4’s More4 and via Walter Presents on streaming platform All4 in the UK a few years ago, lapping up the quirky procedural about an eccentric and gifted professor.

“I absolutely loved it and took very little persuading to get involved,” Miller tells DQ of joining the UK remake, also called Professor T, which he was eager to ensure wasn’t simply a carbon copy of the show that airs on Belgian network Eén and has also been adapted in Germany, France and the Czech Republic.

While key details have been maintained – Professional T is still a criminologist-turned-police advisor whose unpredictable nature drives his colleagues to distraction – it’s fair to say the tone and style of the UK version differ quite dramatically from its source material.

Exterior shots were filmed in the UK city of Cambridge, with the production crew given rare and valuable access to film the unique architecture of Cambridge University’s Jesus College. But the majority of the show was filmed with a British cast during the height of the pandemic last year in Belgium with leading local director Dries Vos at the helm. This gives the UK version the feeling of being a hybrid of a classic British detective drama with some of the sensibilities of the stylish European dramas in which non-English-language streamer Walter Presents specialises.

The UK version launched on streaming service BritBox in June ahead of its debut on ITV this Sunday. It is produced by Eagle Eye Drama, the prodco launched in 2019 by the team behind Walter Presents, in association with Belgian prodcos Caviar and De Mensen, the producer of the original series.

The show is executive produced by Walter Presents and Eagle Eye Drama’s Jo McGrath and Walter Iuzzolino, who was keen to ensure the show felt European, something that has likely helped it on its travels. Broadcasters in Norway (TV2), Sweden (TV4), Finland (YLE) and Denmark (DR) pre-bought the drama from German distributor Beta Film, while it was recently made available in the US on the PBS Masterpiece Prime Video Channel on Amazon.

Miller is hugely complimentary about Koen De Bouw’s lead performance in the Belgian original, but was keen to use his own experience to make his mark on the role. Every aspect of Professor Jasper Tempest’s life is precisely calibrated and rigidly structured. Impeccably dressed and meticulously punctual, he lectures daily at the Cambridge Institute of Criminology, teaching students imaginatively, if pedantically, about the science of crime. Each evening, he returns home to his apartment, which is as sterile and systematically ordered as a laboratory.

He is obsessed with cleanliness, structure and order and hates getting his hands dirty – both literally and metaphorically – but his genius for solving crimes means he is constantly helping the police to crack their most difficult cases.

Tempest’s obsessive-compulsive disorder (OCD) is something Miller says he too suffered from in his 20s, before undergoing cognitive behavioural therapy that has helped him manage the mental illness. “It’s the part of a lifetime for me. I tick all of Professor T’s boxes myself, apart from being a brilliant criminologist, which I can’t claim to be. But a lot of his personality traits are ones that I share,” the actor reveals. “I felt like this was really in a sweet spot for me as an actor because the parts I usually play disguise those things about me, rather than really investigate them, which this role does.”

The fact OCD is a mental illness has sometimes been forgotten in its portrayals on screen, where it is sometimes played just for laughs, and Miller says that when humour does veer into Professor T, it has been earned, partly because of his own experience with it. “My take on OCD is that it’s really about managing anxiety and trying to impose order on chaos. For me, it was always a way of reducing anxiety, to control things you can’t really control, although I wouldn’t have known that at the time,” he explains.

“There’s no reason anything can’t be funny, I think, if the context is right. The character’s ‘problematic traits’ are only problematic for other people, which is one of the things I love about Professor T as a character. He doesn’t really have much of a problem with his OCD himself. He just makes everyone else wear it, which I love. Mine was definitely not like that. I was trying to hide mine all the time.

“I felt if you play it from the inside out and with truth, then actually in those contexts where it’s funny, it will be even funnier. For me, as soon as something like that is played for laughs, I might laugh the first two or three times but, ultimately, I’m not going to believe the character and I’m not going to connect with what I’m watching.”

One of the consequences of filming during a pandemic is that actors tend to have a lot less time to get to know one another ahead of the shoot. However, Miller says this had little impact on his rapport with Tony Award winner Frances de la Tour, who plays Tempest’s colourful but overbearing mother.

“It was just instant,” he reveals. “She’s one of those actors I’ve always looked up to, and I was so excited to play this double act with her. Her timing is phenomenal and she’s just brilliant. We hadn’t met before we shot our first scene together, and we’re playing mother and son, but there was a real connection between the two of us and a shared love of comedy.”

Both actors, of course, have backgrounds in comedy, with Miller rising to fame as a part of a sketch duo alongside Alexander Armstrong, while de la Tour came to prominence playing Ruth Jones in hit 1970s sitcom Rising Damp.

Miller says one scene with de la Tour that occurs late on in the six-part first season of Professor T is one of his favourites he’s ever acted in. “It’s the two of us having an extraordinary lunch together and there are all kinds of undercurrents to what’s going on,” he says.

“I find I get very emotional when talking about this show. I don’t know what it is that it’s triggering in me, but it feels very cathartic. A lot of the scenes are very dark and intense and this story was very exposing emotionally for me. What the character is going though chimes with me very strongly,” Miller adds.

As the Death in Paradise star suggested earlier, the role of Professor T has pushed him as an actor like never before: “I’ve tended to do stuff that conceals rather than reveals who I am. This is the first time I’ve felt brave enough to do something that is really quite close to who I am myself and not be frightened of that.”

Despite the intensity of the role, Miller adds that the experience of working on the show with a skeleton crew under Covid-safe conditions was “unbelievably joyful.”

“Over the years, I have noticed that comedy sets tend to be quite dull and serious, while on drama sets about really dark subjects, everyone is just laughing and joking the whole time,” he says.

Meanwhile, Miller, who recently starred in Netflix’s global hit Bridgerton as Lord Featherington, believes the genres of comedy and drama are blending more than ever. He puts this down to the streaming revolution, allowing executives to throw the shackles off when it comes to how TV is commissioned.

“I’m very interested in that side of things and I’ve always loved the business side of what I do,” he says. “I love the way it’s become so international, and that was a huge reason for wanting to do this show as well. I love the way streaming services have just completely wrecked the old ideas of genres.

“We’re not restricted so much by having to develop through a drama department or a comedy department. You can have real exquisite moments of both in shows, and the breaking down of those genres has been a real development of things moving online.

“In the 1990s, everything was comedy, whereas now we’re all fascinated by crime. The sophistication of this genre has been just breathtaking over the last two to four years. We’ve seen some extraordinarily brilliant shows and it’s all being driven by this international cross-pollination that’s not really existed before.”

Miller, clearly an advocate for European drama, says the Scandinavian thrillers we’ve seen on BBC4, Walter Presents and other platforms are influencing both UK and US drama, offering Broadchurch and Big Little Lies as respective examples. And as TV becomes ever more local yet global, Miller believes broadcasters are upping their game to compete with global giants.

“The technology we’re using now is bringing it about, and the pandemic has only accelerated that because we’ve all watched each other’s shows. This is an ITV show but it can stand shoulder to shoulder with anything produced by the streamers.”