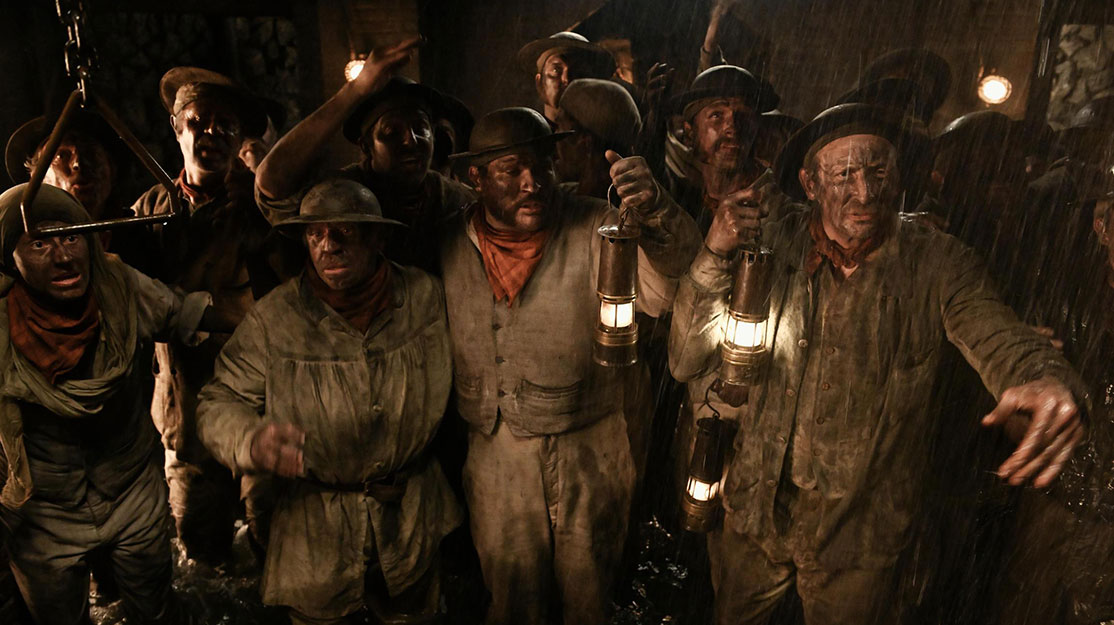 Revolution is in the air in Germinal, a six-part adaptation of Emile Zola’s classic novel. Director David Hourrègue reveals why he wanted to bring a fresh approach to the story of coal miners in 1860s France.

When director David Hourrègue first heard about plans to remake French author Emile Zola’s classic novel Germinal, he thought it was the worst idea in the world.

An uncompromising portrayal of a coal miners strike in the 1860s, Germinal has been adapted for the screen numerous times before, most notably in a 1993 film starring Gérard Depardieu. But every attempt had left Hourrègue feeling cold and emotionally unattached to Zola’s characters.

As such, the fact that the new six-part adaptation of Germinal comes with a renewed focus on character and emotion was key to Hourrègue joining the project. Created and written by Julien Lilti (Hippocate), it moves events to the end of the 19th century and leans into the filmmaker’s research to present the true scope of the dangers the miners faced every day trying to earn money for their families, while also highlighting the lives of women in the community.

But the central premise – covering themes of suffering, rebellion and comradeship – remains unchanged. After fleeing Lille because he assaulted a superior, Etienne Lantier (Louis Peres) finds refuge in the coal mining town of Montrou, where he is hired to push carts through the pit and offered shelter by the Maheu family. As he experiences the harsh working conditions and daily humiliation the miners suffer at the hands of those in charge, Etienne begins to dream of revolution and plans a revolt.

Meanwhile, he also falls in love with Catherine (Rose-Marie Perreault), Maheu (Thierry Godard)’s daughter, who is also the target of affection from the brutal Chaval (Jonas Bloquet).

“Germinal is a huge part of our history. It’s a very famous book in France. It was the most terrifying thing to take on this project,” Hourrègue tells DQ ahead of Germinal’s world premiere at French television festival Series Mania at the end of August. “I’ve seen all the adaptations of Germinal but I always felt the same about them: I was very far from the emotions of the characters.

“I was a huge fan of this type of story. I always had a fascination about the archetypal charismatic leader, but Etienne never gave me goosebumps. For me, that was the first important thing to fix.”

In fact, Hourrègue had been thinking about a new Germinal project when he was in the corridors of series producer Banijay Studios France and noticed an unusually large number of people all reading Zola’s book, which was first published in 1885.

“I thought, ‘What the hell? Why are you reading Germinal now?’” the director recalls. “My producers Alban Etienne and Carole Della Valle said, ‘We are thinking about a new adaptation of Germinal.’ I remember laughing. I thought it was the worst idea in the worst ideas list. I said, ‘Pick 10 people in the street and ask them about seeing a modern version of Germinal!’ Life is so terrible, people want fun, they want hope, they want to laugh. Alban asked me to come into his office and said, ‘OK, you don’t want to do it? Fine. But if I was asking you to do it, how would you do it?’”

Without realising he was auditioning for the job, Hourrègue spoke about why the story needed greater emotional engagement with its characters, his interest in the viewpoint of Monsieur Hennebeau (Guillaume de Tonquédec), the mine’s boss, and of his wish to better understand the female characters in the story – namely Catherine, her mother Maheude (Alix Poisson) and Madame Hennebeau (Natacha Lindinger). He also wanted to shine a light on Chaval, who rapes Catherine towards the end of episode one – a moment that appears to take the light out of this cheerful and light-hearted character in the same way the darkness threatens to extinguish the small flames that light the mine shafts.

“You will see all the characters, and Etienne is one of the most fascinating, of course. But Monsieur Hennebeau is amazing, and Chaval is another character who is going to create a lot of conversation,” Hourrègue says. “I spent a lot of time trying to understand this character perfectly. I don’t like to label these types of characters as monsters. I want to understand him in his time, and it’s going to be a huge thing in this show.

“I also did a lot of research about women’s position [in society] during this time and, with Julien, we decided to have a major focus on the female characters. It will be a little revolution within Germinal.”

When he began thinking about how he might film the six-part historical drama, Hourrègue was clear that he didn’t want to use too much VFX on a series that combines the grand manors of the wealthy elite and the crowded, stripped-back homes of the miners and their families with the dark, dusty and claustrophobic tunnels of the coal mines, accessible only by an rickety lift that drops its passengers 600 metres below ground as though they are on a demented theme park ride.

“That was the first step. I didn’t want a CGI movie,” he says. “I wanted my actors to feel the truth about this place – the cold, the coal. After this, we decided with my DOP to shoot the series with anamorphic lenses, so you could have some scale.

“It was a very tough shoot; we only had 11 days per episode. But when I was shooting in a classical way, I was convinced it wasn’t enough for me as a viewer to come to see this. We don’t care about seeing another revolt, as we’ve seen it before. We don’t have anything more to say about that. My obsession was to think about my point of view in every scene. I think we have arrived at a good balance with the classical material and a new approach.”

But before production started, Hourrègue admits he was worried about how a show considered to be a “French project for French people” could appeal to a wide audience. “It was a nightmare,” he says. “My first reaction was that people don’t want to see Germinal again in France, so can you imagine elsewhere?”

The answer was to capture viewers’ imaginations by telling the story in a thrilling and captivating way, right from the launch of the first trailer. “I wanted to do it in an international way and I’m very confident about what we’ve done,” he says. “As someone who didn’t want to see this programme, if I saw the trailer, I would watch it. We had to make a revolution and I hope people will come to see it.”

Arguably part of the answer in bringing new audiences to Germinal was to hire Hourrègue, best known as the director behind Skam France, the French adaptation of Norway’s hugely popular teen drama series.

“Maybe the most common thing the two projects have in common is an emotional approach,” he says. “I had a dinner with France Télévisions and the first question they asked me was, ‘How can you come from Skam to Germinal?’ I answered, ‘I don’t know. If you hire someone who knows how they are going to make Germinal the day after they are hired, they are a liar or a genius. I’m not a liar and I’m not a genius, so I must work.’ And I worked a lot.”