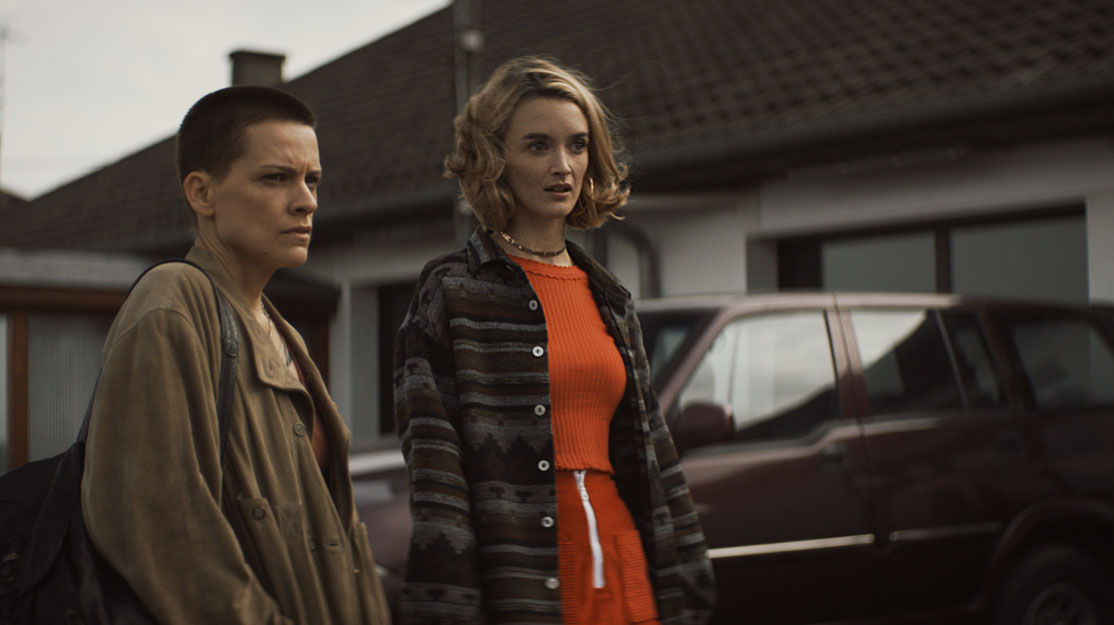 Virginie Brac, creator and writer of French drama Cheyenne & Lola, and director Eshref Reybouck reveal the influences behind this story of two women who form a ruthless duo on a mission to take on the criminal underworld.

Mix the central friendship at the heart of Thelma & Louise, the style of Breaking Bad and the broad vistas of a western and you might come close to describing French drama Cheyenne & Lola.

Recently released from prison, Cheyenne is working as a tattoo artist and a cleaner on the ferries between France and the UK, while Parisienne Lola has just arrived in northern France to move in with her lover.

When Cheyenne witnesses Lola killing her lover’s wife, she assumes she will be accused of the crime. After fleeing the scene together, the the women transform themselves into a ruthless duo who become involved with crime lords, cops, bosses, ex-husbands and lovers as they spot an opportunity to make money in a male-dominated world.

Brac admits the series is a little different from the crime shows she has done in the past, having taken inspiration from a book about the real-life cleaning ladies who work on ferries in the port towns of northern France.

“I went there and saw the migrant problem, where they’re like ghosts on the beach,” she tells DQ as Cheyenne & Lola appeared in competition at French television festival Canneseries last month. “Everybody pretends they’re not there, but they’re there. I had the idea of making it with a Breaking Bad rhythm and taking this meeting between two girls who have nothing to do with each other and decide to make money together. But, of course, success comes with a price.”

Initially, Cheyenne doesn’t want anything to do with privileged Lola, who is described as very emotional and clueless in dealing with the real world. But the murder bonds them together.

“Lola comes from Paris and Parisians are outsiders in France,” Brac explains. “It’s very difficult for someone from Paris to be in the country like this because Cheyenne’s environment is very poor. They try to get by, but the problem of money is there all the time because that’s how it is. Money doesn’t fall from the sky. They have to get it, and if you don’t want to be a prostitute, what do you do?

“Their only motivation is to make a life for themselves – and for Cheyenne, it’s [also] to take down Yannick. He does something terrible to her sister and then she decides she’s going to win. But she can’t win if she fights a regular fight, so she undermines him the whole series.”

After reading the first two scripts, Belgian director Reybrouck was drawn to the show’s leading duo and its mix of drama and humour.

“I thought was rare and well written, so it was a no-brainer,” he says of joining the project. “When you read it, you instantly make the link between Thelma & Louise, and I also wanted to give a western vibe to it. There’s a vastness to it that I really like and you also have Cheyenne versus Yannick. It’s a modern western. It was really interesting to do.”

“In Thelma & Louise, everybody forgets they commit suicide at the end. I thought, in 2020, they’re going to win,” Brac says. “Otherwise, it’s a western on the coast. I like what Eshref did to it because it’s very poetic and very romantic, although it’s about people who are living in a very poor environment. It’s not miserable, but you have to know your influences and know what you take from other stories. We are all influenced by other things.”

Brac wrote the series alone, taking it episode by episode and keeping to strict working hours. She says she focuses on the characters and their behaviours, leaving Reybrouck to shape the show’s visual style.

“I was really pleased because I know how it is in Belgium, where the director has a lot of freedom. I didn’t know what to expect in France, but luckily it had the same vibe,” he notes of the production process. “In the prep, we worked a lot together. It was really intense but when we started to shoot, I felt free to create the world I thought it should be.”

Belgian actor Baetens joined the project early in development, but Brac and Reybrouck reveal they saw around 25 actors for the role of Lola before casting Montreal-born Le Bon.

“She was the difficult one,” Brac jokes, before Reybrouck adds: “She was very difficult to find because she’s a difficult character to play. She’s naive, intelligent, sweet, a bitch. It’s a wide range.

“Luckily someone came up with the idea of Charlotte. We did some casting with her by herself and everybody agreed she had to have a second round with Veerle. Then when we put them together, it was pretty clear it was Cheyenne and Lola. For the rest of the cast, the casting director did a really good job because we have a really good mix of known actors and unknown actors who have big parts in the show, and they all shine in their way. They’re all interesting. We have a very good ensemble behind Cheyenne and Lola.”

Directing all eight episodes, Reybrouck utilised lighting and production design to help shape the show’s visual style, which is also notable for the director’s selective use of close-ups. “I am fond of a slower pace than most people are used to looking at,” he says. “I don’t shoot a lot of close-ups but, when I do, it has a bigger effect because I don’t use it as much. That’s something they use in westerns, too, to enhance certain moments.”

Filming took place in Dunkirk, Le Touque and Cherbourg along France’s northern coast. The director describes Cheyenne & Lola as one of the toughest productions he has ever worked on, largely as a result of the logistics of shooting on location. This meant battling wind and sand on coastal camp sites, as well as finding a ferry company that would allow them to shoot scenes at sea.

“It was very difficult to find a company we could work with. Nobody wants to be linked to [a story about] migrants, so that was not easy,” he says. “We found a company that would allow us to shoot on those ships but they said, ‘It’s a working boat, so you can shoot and do whatever you want but we won’t stop working.’ When the boat came to dock, it stopped for one hour, dumped the cargo, new cargo came on and then left again, so we had a very limited time to do scenes on and off the boat.

“Finally, we went for a week on a ship for a trip to Ireland. We had a lot of complications. If the sea was too wild, we had to shoot with a Steadicam to stabilise the whole scene – but then, of course, the actors were moving about. On the second day, half of the crew and half of the cast were sick all the time so then it was, ‘OK, which actor is OK?’ and then we’d shoot their shot. It was very difficult.”

Filming in Cherbourg “was hell because it rained constantly,” Reybrouck continues. “It’s almost like an island and it has a micro-climate, so it rains very heavily and then, 10 minutes later, the sun comes, and then it rains again. We often had to shoot scenes twice with rain and with sun because we didn’t know how it was going to end.”

Distributed by Federation Entertainment, Cheyenne & Lola is produced by Lincoln TV in coproduction with Orange Studio, Scope Picture and Pictanovo. With the series debuting tomorrow on OCS in France and also set to air on VRT in Belgium, Brac says viewers will support Cheyenne and Lola on their struggle through France’s underworld.

“To me, they’re very likeable because they struggle so much,” she says. “They fight so much and they take so much abuse, so they try to do something about it. And they’re funny in the way they bond and build a friendship.

“Lola is very fond of Cheyenne – she could be in love. But she forgets about the fact she has actually killed a woman. It’s absolutely not a problem for her. She decides it was an accident, so it was an accident. She can do anything.”