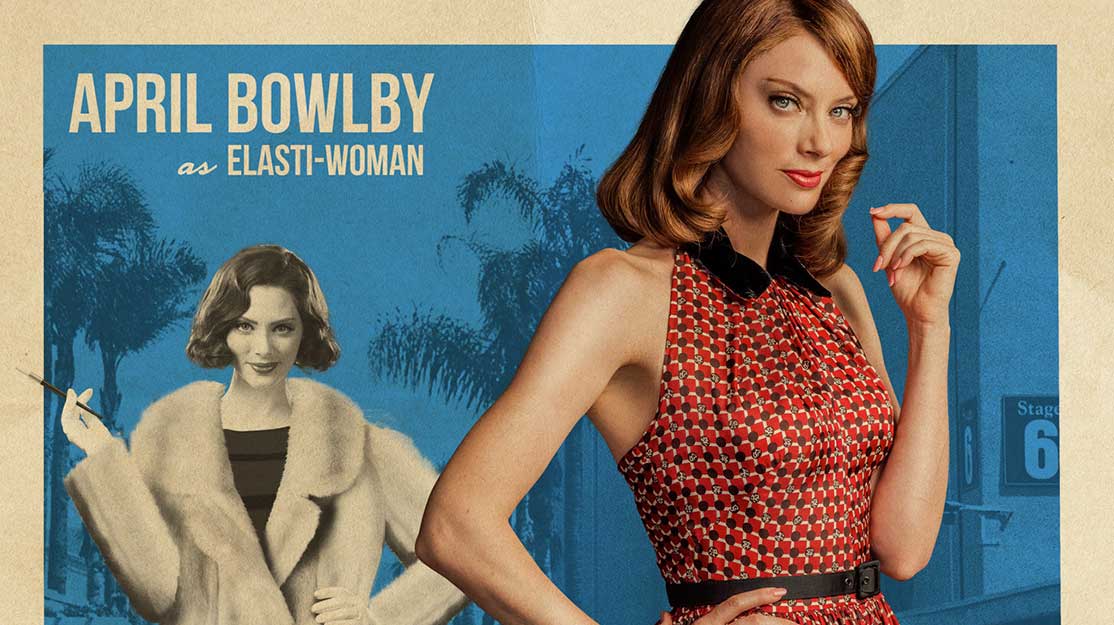 The DC Universe streaming platform introduces a new band of superheroes in the form of Doom Patrol. April Bowlby, who plays Rita Farr, aka Elasti-Woman, tells DQ about the ‘amazing’ experience of making the show.

Bringing a much-loved comic book character to the screen can be a daunting experience for any actor, not least when that character is part of a hugely popular group of superheroes, with fans who have been following them for more than 50 years.

That’s not been the case for April Bowlby, however, who says she has been warmly welcomed into the world of DC Comics and the on-screen DC Universe after signing up to star in Doom Patrol.

“I’m adjusting pretty well. It’s all very new to me and I have to say it’s a whole new world,” she says of the fandom connected to the comic book world. “I feel grateful to have that responsibility to represent a character that is enjoyed and has never been represented before. With that in my heart, it’s been a fabulous experience.”

Bowlby plays Rita Farr, aka Elasti-Woman, in the 13-part series commissioned by DC’s fledgling SVoD platform DC Universe. Farr is a former actress who develops the power to stretch, shrink and grow after being exposed to a toxic gas, leading her to link up with the other members of Doom Patrol: Robotman (Brendan Fraser), Negative Man (Matt Bomer) and Crazy Jane (Diane Guerrero), with the team led by modern-day mad scientist Dr Niles Caulder, otherwise known as The Chief (Timothy Dalton).

Each of Doom Patrol’s members suffered horrible accidents that gave them superhuman abilities but also left them scarred and disfigured. Traumatised and downtrodden, the team finds purpose through The Chief, who brings them together to investigate the weirdest phenomena in existence and protect Earth from what they find.

The show’s origins can be traced back to 1963, when writers Arnold Drake and Bob Haney and artist Bruno Premiani brought the characters to life in issue 80 of My Greatest Adventure. But if there was any pressure in portraying the character, Bowlby is afforded some freedom by the fact this is the first time Elasti-Woman will be seen on screen.

“There are so many ways she could go. Luckily, I think the writers and the creators have found this beautiful balance of creative freedom and also following the [comic book writer] Grant Morrison version of the comics, which is dark and humorous. All the characters find themselves in crazy, wild and wacky situations, but they are all balanced with heart, kind of like the human condition. That’s the grounding of the show.

“To be able to play that and have it so beautifully written and honest from the heart but then to be in such strange circumstances is a real gift. And there’s nothing to follow – it’s all freeform and you can create anything you want. That’s why our show is so cool, because the stories are so wild, you do create anything you want. It’s a blessing.”

The series, which debuts on February 15, is set after the events of fellow DC Universe series Titans, picking up with these reluctant heroes after The Chief is kidnapped and they are called to action by Cyborg (Joivan Wade), who comes to them with a mission that is hard to refuse but with a warning that is hard to ignore: their lives will never be the same again.

“Throughout the season, they have to try and bring The Chief back. In each episode, you learn about a character and why they’re so broken and alienated from the world,” Bowlby explains. “Then they have to come to terms with their deepest, darkest fears – why do they function the way they do and how do they let that go so they can save the person they love? There’s this beautiful arc throughout the whole thing, and I think people can relate to that – I feel like we grow when we’re most uncomfortable, and that’s what this show is.”

Doom Patrol is similar to many other superhero series in that it takes time to establish the backstory of each character and reveal how they acquired their unique abilities. Farr, Bowlby says, is a very sweet, incredibly beautiful actress who is admired by many until she is exposed to toxic gas that causes her skin to “blob out,” leading her to lock herself away from the world.

“She’s on a journey of accepting that wounded part of herself, the broken part no one wants to look at, and being like, ‘It’s OK if I have this darkness inside me – maybe we can make good of it,'” Bowlby continues. “But it’s quite a process. She resists it very much. She doesn’t want to be a superhero; she’s an antihero. She’s very selfish. She’s like, ‘I just want to stay home and eat.’ So there’s this nice evolution throughout where each character has to learn how to help and grow, which is a terribly difficult thing.”

Doom Patrol seeks to blend dark and mature themes with humour, dysfunction and the absurd, finding a balance between the broad appeal of the superhero genre with the personal conflicts affecting each of the characters. A stranger to the series until landing the part, Bowlby went back to the original 1960s comics before picking up the Morrison issues from the 1980s. “I read through those and I was like, ‘Oh shoot, this is crazy! This is dark and fun!’ Every time we get a script, it’s like, ‘What is happening?’ The characters ground it but the situations are so extreme and funky and weird. I don’t think there’s anything like it on TV.”

The members of Doom Patrol have already appeared in an episode of Titans, suitably named Doom Patrol, which doubled as a backdoor pilot for a standalone series. During her initial audition, Bowlby read for a character in Titans who didn’t even have a name at that stage. When she finally landed the part, her manager revealed she would be playing Elasti-Woman in both Titans and the Doom Patrol series.

Bowlby is best known for starring in all six seasons of fantasy legal drama Drop Dead Diva, which aired on US cable network Lifetime between 2009 and 2014. She’s also appeared in sitcoms Two & a Half Men and The Big Bang Theory.

Doom Patrol, however, was a “huge leap” for the actor. “I normally do comedy and this is the most dysfunctional, beautiful character I’ve ever played. She’s so broken but tries to cover it. She’s written so beautifully and she’s so layered. It’s been quite a process,” says Bowlby, who watched films such as The Star and Sunset Boulevard to help her capture Rita’s 1950s style. “She’s this broken, beautiful thing that hisses at the world when you try to touch her. I’ve never had so much fun!”

Filming has been “amazing,” she says, despite some 17-hour work days and the challenge of bringing five leading actors together. “But everyone has meshed so well,” the actor continues. “Everyone has a bit of their own character inside of them. It’s funny to watch because you see Diane, she is kind of Crazy Jane a little bit and I’m kind of Rita Farr. We have this joke where we’re kind of like The Breakfast Club – we are the adult, dysfunctional Breakfast Club. One of us is the brain, one of us is the princess, one of us is the basket case. I just fell in love with all these people.”

One notable challenge, aside from the make-up and special effects required to create Elasti-Woman, was an underwater scene filmed in a tank, which meant Bowlby had to work with scuba instructors to learn how to dive. “That was really cool. It’s just been a dream job,” she says. “What other job do you get to learn to scuba dive? It’s crazy. It’s been fantastic.”

Joining Titans on the DC Universe platform, Doom Patrol is part of the wider DC television landscape that features characters such as Supergirl, The Flash and Green Arrow, which appear in series on US network The CW. Like those dramas, the new show comes from Berlanti Productions in association with Warner Bros Television. Executive producers include Greg Berlanti, Geoff Johns, Jeremy Carver and Sarah Schechter.

But what is it that drives the ongoing popularity of superheroes on the small screen? “I’ve been trying to figure that out because it’s all very new to me,” admits Bowlby, who says her own superpower of choice would be the ability to fly. “I think it’s a little bit of escapism. Also, every superhero is broken in a way, so there’s this relatability of being wounded in this life and then to actually have the power and the voice to speak up and change things. It really speaks to the human condition.

“Our show is so special because it is the antihero show. None of our characters want to do good with their powers. None of them want to own it, none of them want to be a part of it, except Cyborg. They’re very reluctant heroes. I think maybe people can relate to that a little bit. But there’s a magic in being able to suspend reality and imagine you could actually help people and save people.”

While entertainment and escapism are always essential factors in a superhero series, Bowlby says Doom Patrol also has a moral message at its heart. “I hope people take away that the show is about coming to terms with yourself and looking at yourself and loving your dysfunctional family and growing,” she adds. “Everyone can relate to that. Our show is also very much about loving the darkness within you.”