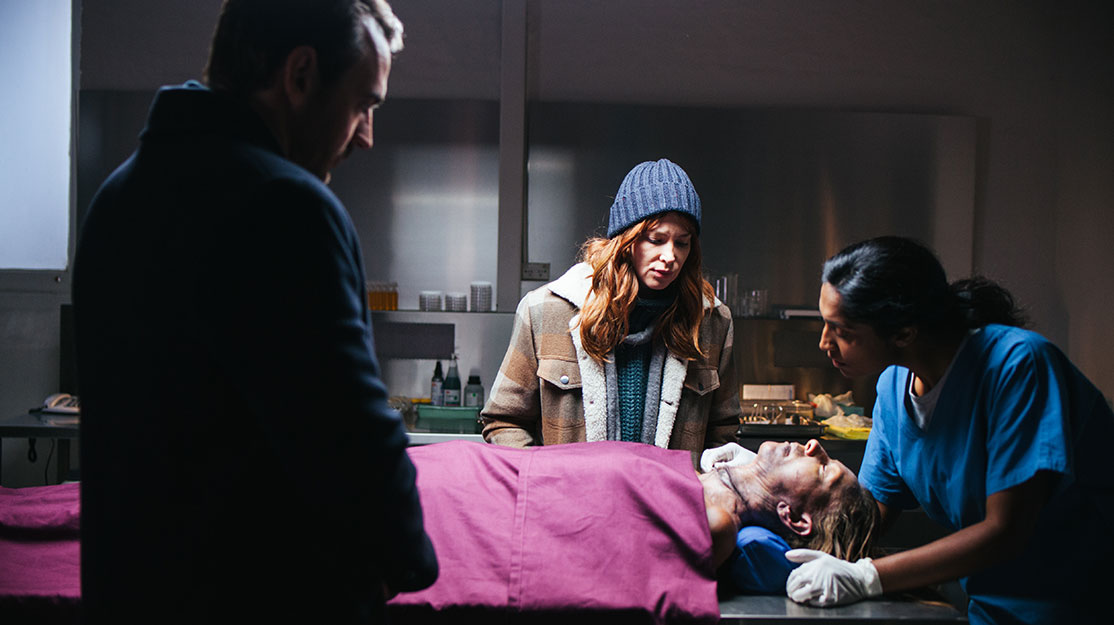 With The Kettering Incident and now The Gloaming, writer Victoria Madden is honing a reputation for unsettling crime dramas. She tells DQ about her latest project.

From the opening moments of Australian drama The Gloaming, Tasmania’s breathtaking scenery is captured in all its picture-postcard beauty, from waterfalls and lush green forests to brooding, fog-covered mountains and the urban landscapes of the island state’s capital, Hobart.

It all serves to create a mesmerising backdrop for the eight-part series, which blends crime drama and the supernatural to build an unsettling story set across two timelines.

The story begins when an unidentified woman is found brutally murdered, with evidence discovered at the scene linking the crime to a 20-year-old unsolved case. Then what starts as a routine investigation exposes something more insidious, as political corruption and shady business dealings intertwine with sinister crimes and occult practices.

That the series comes from creator, writer and showrunner Victoria Madden will not surprise viewers who saw her previous show, The Kettering Incident, which similarly mixes crime and mystery to tell the story of a woman who returns to the titular Tasmanian town 15 years after her best friend disappeared, prompting her to discover what really happened.

Madden says it is “exciting” to be able to mash up traditional genres, describing The Gloaming as “very original.” She continues: “It feels a lot bigger than Kettering and that was a bit of a challenge. This is another level, partly because we’re filming in a city, whereas Kettering was out in a forest.

“The story that starts the series, what happened 20 years ago, feeds into the [present day] crime story. The supernatural elements then entwine into the crime story and I’ve used Tasmania’s convict history as well to draw on. It’s a bit of everything. The supernatural certainly plays a major role.”

After The Kettering Incident launched on Australia’s Foxtel in 2016, Madden began working on a new project that continued to explore a mixture of genres, and that would once again be set on the island of Tasmania, where she is from. She also wanted to draw on Tasmania’s mythology and history, and particularly the British colonisation and the Black War that led to the near obliteration of its Aboriginal population in the early part of the 19th century.

But rather than start with the idea for a character or the central plot, the writer determined that her next project would begin with an exploration grief.

“My mum was dying – she died just before we started shooting, which was difficult – and grief is such a strange emotion,” Madden says. “We all go through it on some level. It’s a mysterious process. Because Tasmania has a very dark and violent history with colonialism, a lot of what interests me is it’s a place that’s haunted by a past that hasn’t been resolved. You can see the past in so many places, so I felt grief was something I could explore on two levels – characters going through long-term, lingering grief and trying to draw out the grief in the land.

“‘Gloaming’ is also a favourite word of mine – it means twilight, in between day and night, and in grief you get stuck. You can’t go forward, you can’t go back, so it became this ghost story.”

Madden also wanted to flip the traditional crime drama structure, offering viewers a glimpse of the central criminal early in the story to make The Gloaming a ‘whydunnit’ rather than a ‘whodunnit.’

“I found that quite a tricky, complex thing to do, so I can see why people don’t do it that often,” she admits. “It’s interesting; it makes you think about why people do what they do and work out the motive behind it. From there, all the fingers of all the different genres start to spread out. But at the centre we have Molly and Alex, who are connected to the past and have to work together and resolve it. Molly is a messy, complex character and both of them are stuck, partly because of what happened 20 years ago. Their journey is a very heavily character-driven journey.”

After an opening prologue set 20 years in the past, the story begins in the present day where unorthodox detective Molly McGee (Emma Booth) is brought in to investigate the aforementioned murder. Fellow officer Alex O’Connell (Ewen Leslie) is then sent from Melbourne to Tasmania to help solve the case, while his return to the island brings back haunting memories of their shared tragic past. The cast also includes Aaron Pedersen and Rena Owen, while Michael Rymer (American Horror Story), Greg McLean (Wolf Creek) and Sian Davies (Wentworth) were on directing duties.

While The Kettering Incident rolled out weekly, all eight episodes of The Gloaming were dropped on Australian streamer Stan on New Year’s Day, with a story that demanded greater complexity to match the ambitions of the premium platform. One of the key things Madden had to get to grips with was balancing the stories of a greater number of characters all vying for screen time.

“I really love the way the Scandis tell their stories because all their characters have a journey, not just one or two,” she says. “I knew I had to get to know all the characters really well, know what they wanted and know what was driving them. Kettering was really good groundwork for that, so I knew I had to push a bit harder and try to open up different aspects of the stories and heighten the genre elements.

“Because there are so many characters, it was a question of where to focus. Every episode focuses a little bit on a character or a cluster of characters, so they’re all involved in one particular thing together. You don’t want to be in my room at home watching me put this together – you’d be pulling your hair out. The hardest thing is not showing your hand too much. The two mistakes writers make is they make the characters too self-aware and they don’t trust the audience enough to plant something and move on and then come back to it. Really clever plotters do that quite well.”

But while characters and plot points were constantly juggled, one element that remained in place was the ending, with Madden saying she always knew how the story would conclude. Having drawn criticism for the “oblique” ending to The Kettering Incident, she sought a more traditional, emotionally satisfying finale to this series. However, she adds: “I’m never going to write a sickly sweet end point. I like to keep it emotionally complex because that’s how you live your lives.

“I certainly knew a twist I wanted at the end, I just wasn’t sure at one point how I was going to get there. But, funnily enough, when you do know what you want at the end, it just mulls around in your head until you suddenly realise how it’s going to go. It’s like doing a big crossword puzzle.”

Madden was joined in the writing room by Peter McKenna (Red Rock), who penned episode six, while she also collaborated closely with McLean, whose passion for the material led him to take on an expanded role as an executive producer.

Behind the scenes, The Gloaming is produced by Stan and Disney-owned ABC International Studios, with Madden’s Sweet Potato Films and producer John Molloy’s 2 Jons. Working in Tasmania, with its temperamental weather and rugged terrain, proved challenging during production. In addition, Madden had to balance the darkness of her original material with the aspirations of the coproduction partners for a series that could appeal to a wide audience, not just in Australia but around the world.

“Some of the Disney people thought it was a little too dark so I had to compromise a little bit. The best thing you can do is step back, don’t chop it to pieces, and try to understand their concerns,” she says. “Sometimes it’s frustrating because [the discussion point] is something that’s always been there. But, at the end of the day, I try to find a way to deal with it. I’ve been doing it long enough to know you can’t get around notes. You fight the fights you think you need to fight, and sometimes you need to compromise. That’s the relationship.

“Stan were very supportive and are very supportive of the creative voice. That’s what sets them apart. We’ve had so many years of bring suppressed and toeing the network line but now that there’s streaming services, we have more freedom. We can be a bit bolder, and Stan have been incredible for that. They really liked Kettering and wanted that individual voice. They wanted a show no one else would have made.”

With The Gloaming, Madden has certainly built on the style and tone she set up in The Kettering Incident, enhancing her reputation as a writer of melancholic mysteries that subvert the usual genre cliches. It’s a long way from the start of her career, when she worked on shows including The Flying Doctors and Heartbreak High and was a story producer on British crime drama The Bill.

“I would like people to watch The Gloaming and think, ‘This is a Vicki Madden show,’” she says. “I’m not going to write a comedy next week – that would be tragic.”

If her hope for the series is that viewers immediately demand a second season, she is already working on how Molly and Alex might be reunited for a new story. But any potential follow-up will come after Madden takes a break and then focuses on an upcoming film project.

“We’ve all got our fingers crossed,” she concludes. “The characters go on this journey and you think, ‘I wonder what they’re going to do now.’ It will be another cop story with a different crime, and we can move around Tasmania. It may not be in Hobart, maybe the north-west, which is a different landscape again, and the relationship between the two characters will take them on the next adventure.”