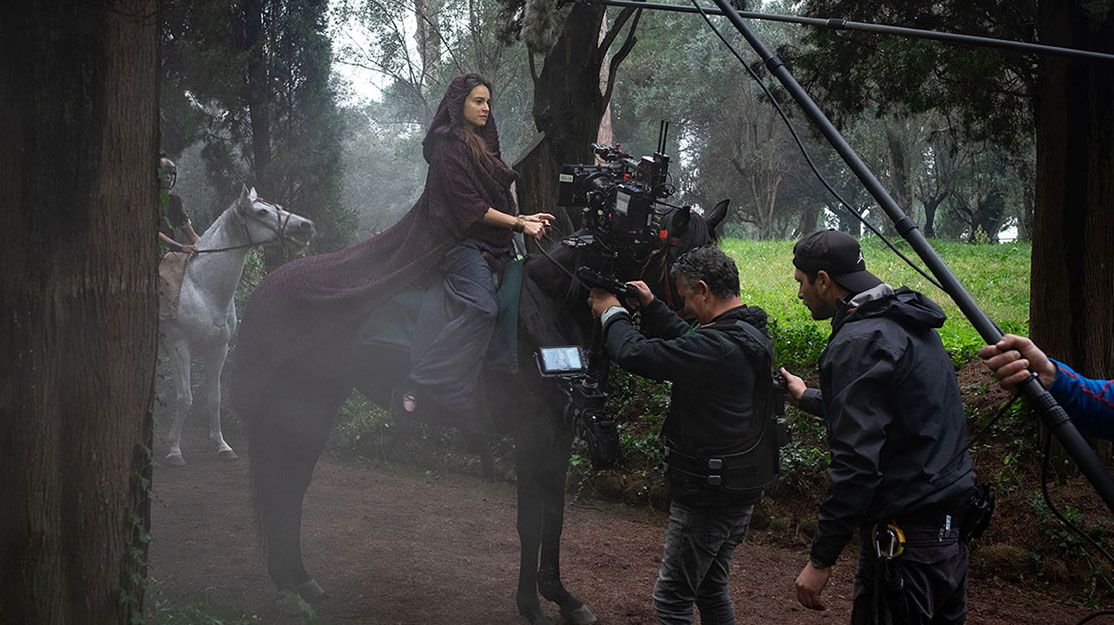 The world of Ancient Rome is recreated in Domina, a Sky historical drama that explores the city’s power struggles from a female perspective. Following the life of Livia Drusilla (Kasia Smutniak), it charts how she overcame adversity to become the most powerful woman in the world.

How did you join Domina?
Tranchino: I was lucky to be part of a shortlist of designers who were interviewed by the producers to join the show. Maybe it was because I had worked in Cinecittà Studios [in Rome] several times before, on movies including Martin Scorsese’s Gangs of New York, so I was already familiar with the crews and the structure. I’ve always had passion for period design and movies about Ancient Rome, and being Italian and living in Rome, a place infused in history, culture, art and beauty, was probably also a strong point.

Pescucci: Producer Cattleya called me. It seemed to me a fascinating project and I accepted with great pleasure to join it.

Sim: I first started speaking to the production team towards the end of 2019. We met on Zoom – little did we know then just how much ‘Zooming’ would be involved. They shared scripts, I shared music and it all seemed to click.

How do you prepare to work on a new series?
Tranchino: The research phase is always very important for me. I usually start by digging into all the reference material available, watching documentaries and movies about the period, or visiting museums and archeological sites. I also try to empathise with the characters, to understand how they see the world that surrounds them and to capture the essence of their living.

Pescucci: First of all, I do historical research on the events of those years. Then I research paintings. In this case, my inspiration was the frescoes of Pompeii and the bas-relief sculptures [where the sculpture remains attached to a base of the same material] of the time, of which Rome’s museums are full.

Sim: Director Claire McCathy is a very generous collaborator. She had a fantastic vision for the series. We talked in depth about the mood and the feel she wanted to create and, perhaps most importantly, how we should go about presenting Livia Drusilla as this powerful, strong woman operating in a dangerous world. I started sketching out some ideas and themes quite early on, before the shoot had even started.

Luca, what were the first things you had to think of in terms of creating the world of Domina and Ancient Rome?
Tranchino: It was important to tell the story of Livia Drusilla, relating to her psychological transformation, and to show that world through her eyes. I wanted to differentiate the look of Domina from other Ancient Rome pieces seen before. My goal was to combine historical accuracy with the stylisation and the emotional impact of the environments.
In the age of Augustus, Rome was an expanding metropolis, constantly under construction, with a bustling, multiethnic population – a cruel and violent place. I wanted to show big contrasts: the richness on one side, the gritty and the roughness on the other. I avoided the neoclassical idea of a white city of marble, going instead for a more layered texture of contrasting vibrant colours. I also looked for inspiration from all the contemporary places in the world, like India or Africa, that could be reminiscent of a similar kind of living.

How does the show use both locations and studio sets?
Tranchino: Almost all the sets for Domina were designed and built in Cinecittà Studios in Rome, on soundstages and on the backlot. We created more than 40 different big-scale sets. It was a very big productive effort. We also shot in many exterior locations and landscapes around Rome. This was very important in order to capture the unique Mediterranean atmospheric light, the luminous clouded skies and the typical vegetation, of places where the Ancient Romans actually lived. This gives a unique look and flavour to the series.

How does the show use both practical stages and visual effects, and how does this affect your role?
Tranchino: Usually, the production designer is in charge of the overall look of the environments. That includes not only the built sets, the work on the practical locations, the furniture, the textiles and the props, but also the design of the set extensions subsequently developed with visual effects.
Through illustrations, concept art boards and technical architectural drawings, I designed all of the wide CGI shots and set extensions for the series so that everything would be cohesive with the overall look that was established. Working in synergy with the visual effects supervisor is always very important, but I also like to give the illusion of scale and scope with traditional cinematic tricks, like false perspective, light effects and mirror reflections, or by working with selective shots.

Gabriella, what were the first things you had to think about in terms of creating the costumes of Ancient Rome?
Pescucci: I always start from afar: first of all, I think about the extras. It’s like a circle that slowly tightens until it focuses on the roles of the main actors.

How did you want Livia Drusilla to look and what kinds of clothes did you create for her?
Pescucci: I talked a lot with Kasia, I made my proposals and slowly we tried to build the character. Livia was a strong and determined woman. For her, I often used the colour red, which represents Rome. The difficulty in TV series is personalising the characters, and I believe colour is very important. For example, for the role of Scribonia [Christine Bottomley], I used many shades of green.

Samuel, how did you want music to play a part in the storytelling?
Sim: The storytelling in Domina moves fast but we don’t want to tell just the historical side. We really want the audience to engage with the characters and get caught up in the drama. This is where the music can really help heighten the emotions, push the excitement, darken the tragedy and really draw the viewer in.

What were the first things you had to consider in terms of creating music for the series?
Sim: I’m always looking for ways to create an immersive sound world for the projects I work on, so it was important to find something distinct and unique for Domina. Typically, films and TV series about Ancient Rome are scored with a kind of grand neo-classical or late-romantic style of orchestral music, so before I started to write anything, I knew I had to find a different way to go. That led me to a far more experimental palette of sounds and instruments.

How would you describe the music you wrote for the show?
Sim: The music isn’t what you’d normally expect from a period drama. There are moments of abstract electronic music mixed with a hybrid of vocals, guitars, electric cellos, nickel-harps and all sorts of exotic instruments and percussion. Often, the sounds are twisted or manipulated in some way, making it difficult to identify exactly what’s going on. However, the music is also striving to draw the most out of the drama and really get under the skin of the main protagonists. The main title theme, for example, is meant to represent Livia’s driving ambition and relentless will. There are no sweet melodies here – it’s single-minded, powerful and unequivocal.

How would you describe your working process on the show?
Tranchino: In general, we wanted to make sure everything that was created was historically accurate and authentic, but I didn’t want to make a documentary about Rome. I also wanted it to be convincing in an emotional way so, for example, I used colour palettes in a more symbolic and subconscious way, as a vehicle for the various emotional states of the characters.
The House of Livius represented the protective warmth of Livia’s childhood, in a traditional Roman Domus. Then, to reflect the evolution of her life, we made her interiors become starker, with deeper colours. The House of Gaius needed to be monumental, but also intimate and domestic. We created an illusion of scale for the massive public spaces, the squares, the temples and the senate.
Creating a set requires a lot of stages and development before the actual construction will start. Knowing the period and the specific era is always very important, as is knowing the architectural styles. Then some preliminary drawings of the set are made and, at that point, I usually like to make a miniature model of it. That is always very helpful to express ideas to the director and to the producers.

Pescucci: The team was very large, both for the men’s and women’s departments. We ended up making around 800 costumes.

Sim: The production of Domina fell right in the middle of the Covid-19 pandemic. They’d managed to shoot about half the series before the first lockdown, but most of the post-production was done remotely. Even at the best of times, composing can be quite a solitary occupation so, in some respects, very little changed for me, but all the discussions and music spotting sessions were all done online. It was all a bit weird but we managed to make it work.

What were the biggest challenges you faced?
Tranchino: With so many characters and a complex storyline, and so many interiors and exteriors, it was crucial to make sure the audience could immediately understand where everything is taking place. Therefore, I needed to clearly differentiate the various environments related with each character, through specific characteristics and colour palettes. However, the biggest challenge was the short preparation time that we had to constantly create and transform these sets. Working at high speed requires you to make decisions very quickly and, therefore, to be much more focused.

Sim: Recording the music through the pandemic certainly presented some new challenges. Normally, I’d get a whole bunch of musicians together in the studio and we’d spend a few days getting everything down. But with this score, I had to record all the players separately online, in their home studios. Thankfully, the music I’d written largely relies on individual performances rather than large-scale ensembles, so it all worked out OK in the end.

How is your role in television changing compared with 10 or 20 years ago?
Tranchino: The role of production designer has changed very much in the last few years. For various reasons, productions have become a lot faster and there is always less time, especially for the preparation. On the other hand, today it’s definitely easier to gather historical research and reference images. For me, it is very important to preserve the great traditional craftsmanship. But at the same time, I always like to experiment using all the technological tools that are now available, such as numerical control cutting machines, 3D printers or the big range of sophisticated photographic printers that we can use to create backings, wallpapers and flooring materials. Digital drawing is also infinitely helpful for multiplying patterns and complex decorations.

Pescucci: In the recent years, digital colour correction has been used a lot, which very often changes colours, making it unnecessary to work for hours looking for colour harmonies.

Sim: It’s a very exciting time to be writing music for television. There are lots of channels and streamers out there vying for attention, and it’s having a positive effect on the whole industry. It’s more important than ever to push the boundaries, challenge audiences and try to come up with something that’s going to stand out from the crowd. As a composer, it allows you to be more experimental and adventurous. People are far more willing to accept it when you break the rules.