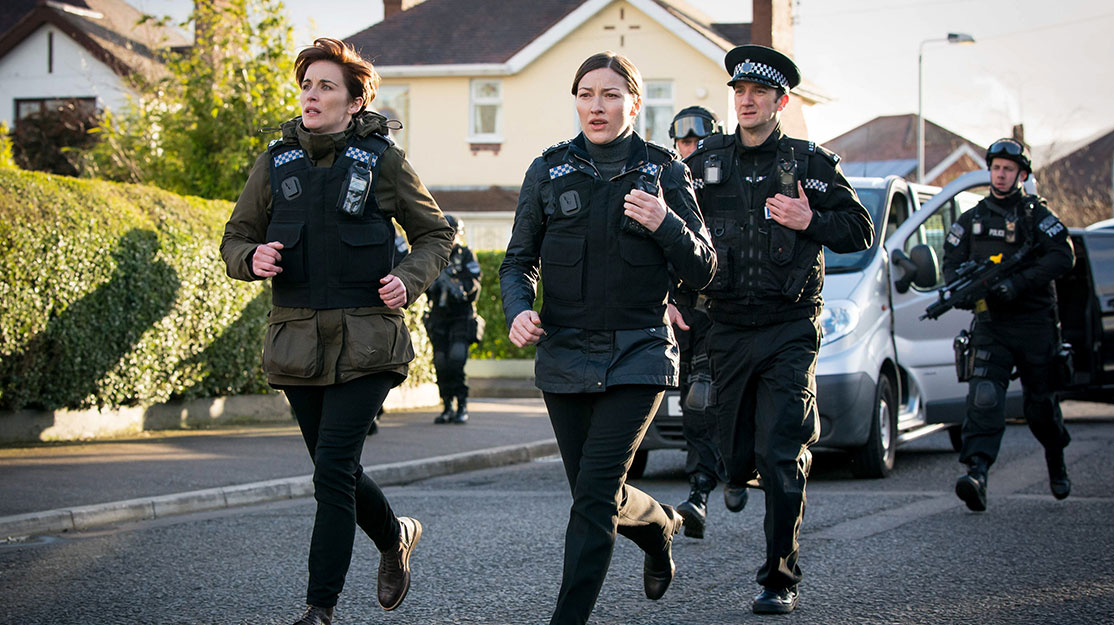 For several years, the fervour surrounding a new season of British crime thriller Line of Duty has become as traditional as the show’s regular guest star slot, with viewers anticipating being placed firmly on the edge of their seats for another six hours of heart-stopping television from creator, writer and showrunner Jed Mercurio.

Never has that anticipation been felt more keenly than now as, after overcoming production delays caused by the pandemic, the show’s eagerly awaited sixth season is finally set to arrive this Sunday on BBC1.

But with cast and crew tightlipped about how this extended, seven-episode run will unfold, the internet has become flooded with fan theories and trailer breakdowns examining any shred of footage for clues about what’s in store this season or the answer to the show’s long-running conundrum: who is H?

“The trailers are great, it’s very entertaining and I’m enjoying all the theories,” says a straight-faced Vicky McClure, who returns to the cast as DI Kate Fleming. “Nobody really knows what they’re talking about. I had a great time shooting it. It was an explosive season. It’s always great when you turn a page and, whether it’s a cracking line or some action sequence, I’m just very chuffed that I’m in those positions where lots of that was going on. That’s all I can really say.”

Mercurio is equally evasive on events this season. “What you get from the trailer is there is still a ghost haunting AC-12, but it haunts the characters in different ways,” he says. “If you’re chasing something that has tormented you, there are some people who are going to redouble their efforts and there are some who maybe want to drift away from that particular endeavour and [who think] that maybe it’s time to give up.”

What can be revealed is Line of Duty continues to follow the investigations of AC-12, a police anti-corruption unit seeking out crooked cops. The ever-present trio of McClure, Adrian Dunbar (Superintendent Ted Hastings) and Martin Compston (DS Steve Arnott) all return for the sixth instalment, with Shalom Brune-Franklin joining AC-12 as DC Chloe Bishop.

Filming was into its fourth week in Belfast last March when producer World Productions – which was also shooting upcoming BBC thriller Vigil in Glasgow and had just wrapped ITV true crime drama The Pembrokeshire Murders in Cardiff – realised it would no longer be safe enough to continue as the Covid-19 pandemic spread.

“There was no panic, it was just looking at the science,” Mercurio says. “We were in a situation where we had a little brush with coronavirus earlier and we were able to test the people who’d possibly been exposed to the virus. They were isolated. We just worked through it and we carried on. But then, in the days [before the national lockdown], we had another potential scare and, at that point, for whatever reason, the government had withdrawn community testing. We weren’t able to test our people, so we didn’t know where the virus was. I just rang Simon [Heath, executive producer] and it was a very straightforward conversation. We filmed the rest of that day and then I told the cast and crew that we were shutting down.”

Five months later, at the end of August, filming was able to resume and was completed in November. McClure recalls returning to set with new testing measures, a traffic-light system that meant only certain members of the crew could interact with the cast, and new sets that would allow appropriate ventilation.

“There was talk of us doing our own make-up, which I was sad didn’t happen for one day just to see how that would have panned out. But luckily everybody had the right PPE equipment so we were able to do that,” she says. “There were a lot of changes. The schedule was probably one of the biggest changes, from an actor’s perspective, because it  meant we were shooting different episodes with different directors on the same day.”

Normally, Line of Duty would be filmed in two three-episode blocks, meaning the show would largely be shot in chronological order and any feedback from the early episodes could be factored into the second block.

“Suddenly, we were near enough in the position of understanding everything right through to the end,” says Dunbar. “The director sometimes had to remind me exactly where we were because we were jumping between scenes. It’s sometimes difficult to know how to pitch something when you’re moving between directors and between episodes, so I did find that pretty difficult. We’re used to a system, and Covid just threw that completely.”

Macdonald has been among the viewers tuning into past seasons of Line of Duty on BBC1 and BBC iPlayer over the past year, admitting that although she was aware of the series when she first read for the part of DCI Davidson, she hadn’t actually watched it. The Scottish actor, who rose to fame in 1996 feature Trainspotting, was living in the US while filming HBO series Boardwalk Empire when Line of Duty first aired in 2012.

“Line of Duty sort of happened while I was away, as did Broadchurch,” she says. “I knew Line of Duty because it’s just part of everybody’s awareness now, because it’s such a massive show and people are so invested in it week to week. I did have to start watching the show when I got the offer. I was like, ‘I should really sit down and see what it is.’”

Watching the series, Macdonald knew she would be in for a dramatic, compelling rollercoaster ride. But what she wasn’t prepared for when she received the first script for season six was the extensive amount of dialogue featuring police acronyms she would have to learn.

“I was happily reading and then suddenly there’s a massive piece of dialogue of stuff I’ve never heard of. I turned the page and it kept going,” remembers the actor, who bonded on set with McClure over a shared love of jigsaws. “It went on and on like that. It’s so compelling and the character is so great, there was almost no doubt in my mind I was going to say yes, but I did have to get over that obstacle in my mind because I knew it was going to be quite challenging. In hair and make-up, they would have a list pinned up [of all the acronyms] which was quite helpful. I’m not brilliant at it still but I get by.”

Macdonald has also had to take a crash course in keeping Line of Duty’s secrets, such is the speculation around the series. “People have been really excited from the get-go and knew more about it [than I did],” she says. “My friends were getting ridiculously excited and screaming in my face, ‘Are you H?’ and I didn’t know what it meant. Then I thought because I wear a K around my neck, I should get one that’s got an H on it just to mess with them. The thing is that everybody asks, they’re desperate to know. But then, before you can respond, they immediately say, ‘I don’t want to know.’ They’re very passionate about wanting and not wanting to know.”

Mercurio, who was also an executive producer on BBC1’s recent Northern Irish thriller Bloodlands, says this season is balanced between the ‘case of the season’ featuring Macdonald’s character and the long-running H storyline, noting the challenge of making sure each new season is distinctive from the rest. The regular cast – Dunbar, McClure and Compston – are all involved in plot discussions with the writer once a new season has been confirmed, when Mercurio hears their thoughts on how their characters might develop further.

“That’s always interesting because I’m starting to focus on something that’s very specific, which is who the new guest lead is going to be,” he says. “That’s the thing that shapes every season. But things that are up for grabs are elements like how long is it since the last season ended in story terms? Those suggestions are very helpful to shape what the arcs might be for the regulars coming back.”

As for the extra episode this season, Mercurio admits he hadn’t planned to turn S6 into a seven-parter but, as a result of having two filming units running simultaneously once filming resumed after the hiatus, directors Daniel Nettheim, Gareth Bryn and Jennie Darnell were able to shoot more material than they might have under normal circumstances.

“We do tend to overshoot, and we tend to shoot a lot of explanations and then in the edit we decide whether we need them or not, whether things are clear enough without all the intervening stages being explained and laid out for the audience,” he says. “What we found was that when we got to the end, we’d initially conceived having a 90-minute episode six. But with all the additions, it was pretty clear it was going to be two hours. Then we got into a conversation with the BBC about the best way to handle that and everybody agreed that it was to split the last episode into two and that created episode seven.”

Heath says nothing is yet confirmed for a potential seventh season – “Let’s see how this season performs” – but Mercurio adds that he does know how the H storyline will eventually conclude, noting that one of the biggest challenges on the show is to ensure the final revelation isn’t anticlimactic.

Furthermore, while the show has never been afraid to kill off seemingly important characters, adding to Line of Duty’s thrilling intrigue, he says not even the central trio are guaranteed to reach the end.

“It’s never far from my thoughts,” he says. “Honestly, we all get on brilliantly, but everybody knows we’re serving something bigger than ourselves, which is Line of Duty. One of the things about the show is that nobody’s safe. It’s what keeps the audience on the edge of the seat. I know it would be a sad day, but all the main cast realise that it’s possible. We’re mates. We talk about it, we joke about it. It’s something no one would relish but everybody would understand.”