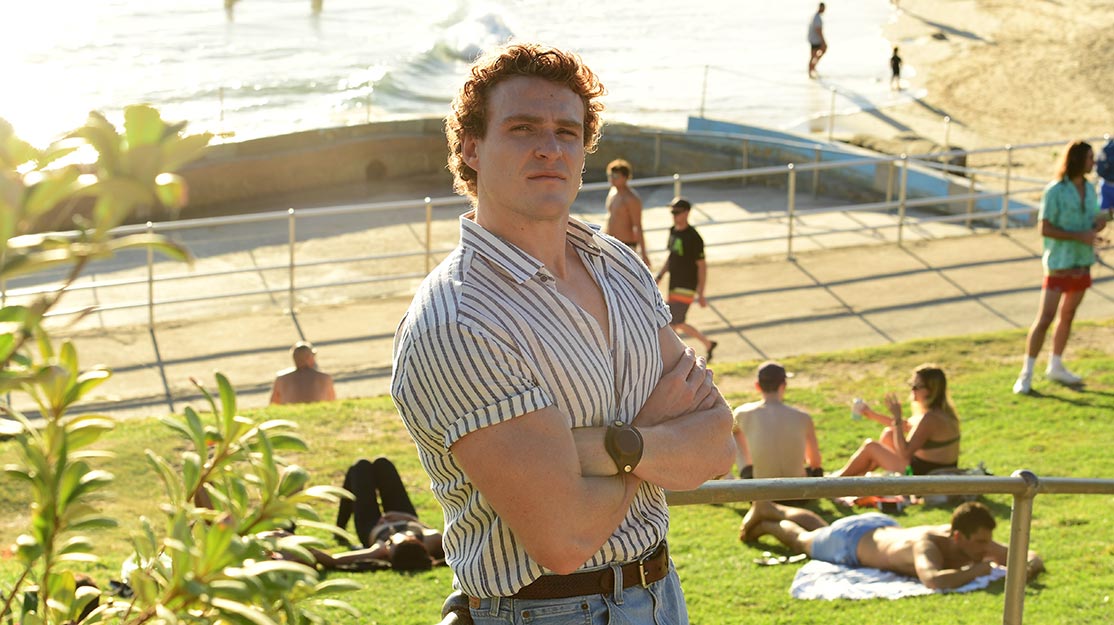 Australian literary hero Les Norton comes to television in an adaptation of the cult books by Robert G Barrett. DQ hears how the source material has been updated for modern audiences while recreating the style and character of 1980s Sydney.

While the 1980s might not seem that long ago to some, seeing the decade recreated on the small screen for upcoming Australian drama Les Norton makes it clear just how different things were back then.

Whether it’s the music, the hairstyles, the fashion or the bold neon lighting, the era is recreated perfectly for this 10-part series. For younger viewers, it’s a period drama, but to everyone else, it’s a nostalgic look back on an era that serves as the backdrop for an adaptation of Robert G Barrett’s novels.

National broadcaster the ABC, producer Roadshow Rough Diamond and distributor Sonar Entertainment have partnered on the series, which introduces fish-out-of-water ‘country bloke’ Les Norton to Sydney’s Kings Cross district in 1985. On the run from a troubled past, he lands a job as a bouncer and fixer at a notorious illegal casino, becoming seduced by the city’s illicit charms and dragged into a web of underground criminality.

Alexander Bertrand (Australian Gangster) takes the title role in this “irreverent love letter to Sydney and the mid-80s,” while Rebel Wilson (Pitch Perfect) and David Wenham (Romper Stomper) go head-to-head in a battle for control of the city as brothel queen Doreen Bognor and gentleman criminal Price Galese.

The Les Norton books have been wildly popular in Australia since the first novel, You Wouldn’t Be Dead For Quids, which lends its name to the pilot episode, was published in 1985. In fact, they are described as the most read books in the Australian Defence Force and the most borrowed books in the New South Wales prison system.

When DQ speaks to creator Morgan O’Neill and producer John Edwards, the series is halfway through its 10-week production, with a view to a launching down under later this year. O’Neill reveals that three units have been filming simultaneously – one fishing off Sydney’s Manly Point, another “pulling up lobsters and cocaine” off the Bondi Beach peninsular and third unit body-surfing into the Bondi sands.

“We’ve got bits outstanding because, for economic reasons, we have to shoot Rebel’s scenes all together and David’s all together,” Edwards explains. “It’s been a little tricky but we’re ploughing ahead now. We’re having a pretty great time. We’re really enjoying it a lot. It’s a great, fun show.”

Edwards describes redheaded Les as “a bit like a Crocodile Dundee,” the laid back, charming hero of the eponymous 1986 movie. “He was a smart character who was an innocent in a dirty world. That’s what we’ve got,” he notes. “A lot of it is metaphorical but it’s a great deal of fun and, hopefully, it’s going to translate more broadly, just as Crocodile Dundee did at that time.”

O’Neill, who has written six of the 10 episodes, is the creative force behind the adaptation, describing Barrett’s books as iconic “pub literature.” He had read them many years ago and, together with producer John Schwarz, decided to develop them for television.

Based in LA, O’Neill brought Sonar on board before taking the project to the ABC, where head of drama Sally Riley is a fan of the novels. Roadshow Rough Diamond then joined as the producer.

In line with the novels, early footage of the series doesn’t hold back, with language as colourful as many of the costumes. But O’Neill admits some of the source material doesn’t stand up to contemporary scrutiny, so he had to find a way to balance the virtues of the author’s work with contemporary society.

“The show is set in 1985 and that was a very different time in Australia,” O’Neill says. “It was a time where there was a sense of irreverence Australians have become renowned for – a laconic sense of humour and social mores. As the years have gone on, Australia has shifted a bit from that. We’ve become a little more brittle and a little more quick to find offence. One of the endearing charms of the source material is it harkens back to a time when we weren’t so quick to be offended and we felt there was social value in treating people fairly but treating them in a way that wasn’t self-serious.”

Barrett, he continues, described himself as an “equal opportunities shit-stirrer. No one escaped his wrath. If you’re up for ridicule, he would gently ridicule you in a way that was part of the charm of Australia in a bygone era. But I’m not talking about racism, homophobia or sexism. In the source material, there was some of that and we’ve worked very hard to make sure our retelling of these stories is absent of anything that is egregious in that regard.”

Part of that approach was to introduce a narrator to the series. But rather than simply describing events or driving them forward, it comes from the perspective of someone today looking back on events as they happened.

“Morgan has really lifted and elevated the material in lots of ways,” Edwards says. “There’s a real fondness for the 80s but there’s a real commentary on the 80s as well. It’s a really interesting show to work on. It’s great fun and you get to look at a period of recent history, a bit like Life on Mars did and have a licence to play with some of the social changes. It really is a great joy to be doing.”

The series also introduces more women in leading roles than the books offered, creating new characters and switching the gender of others. As an example, Les’s flatmate Wozza has become Lozza (played by Kate Box), who is just as voracious, carnal, debauched and foulmouthed as the original character. “Kate’s absolutely made it her own and I look at it now and think, ‘How could you ever imagine that character not as a woman?’ She brings a sense of sexual politics into it that a male flatmate couldn’t,” O’Neill says.

The series echoes the structure of Barrett’s novels, which were largely made up of short stories. Episodes are self-contained, though O’Neill has introduced some “collective tissue” to string them all together. That meant creating an antagonist in the form of Wilson’s character. “The material lends itself to adaptation but it’s required a lot of original material to stitch it together into compelling episodic TV,” he says.

O’Neill had already written two episodes by the time the writers room was opened, providing a blueprint for the show’s style and tone that could be used in addition to the source material. The writers ranged in age and gender, providing a useful means of ensuring Barrett’s novels could be held up for critique as well as inspiration.

“What I love is the slightly different tonal interpretations of the other writers’ episodes,” he says. “They definitely don’t feel like my episodes, in a good way. There are elements where you have to make sure the tone has an overall consistency, but the mistake in those situations is to assume they all need to sound the same. Because they’re capers and because they’re almost standalone, they’re allowed to feel different and, hopefully, that will be part of the thrill of the show.”

O’Neill (Drift, Solo) is also on directing duties, taking on the fourth block behind lead director Jocelyn Moorhouse (The Dressmaker), David Caesar (Dead Lucky) and Fadia Abboud (Australian Gangster). He says a lot of the style behind Les Norton is inspired by early Guy Ritchie films such as Lock Stock & Two Smoking Barrels, with a love of vernacular and the quirky relationships between offbeat men.

On set, O’Neill remains amazed by the number of people who stop to take in the 1980s dressing around Sydney, with old phone boxes and cars turning up in streets across the city. “There are certain things – objects, sounds and songs – that are provocative of a different period, and it’s a really powerful medium to play in. I wanted to make sure we leant into that but, at the same time, we were conscious of producing something that wasn’t a pastiche of 1985,” he says. “It’s merely the context, it’s not the joke. There’s hopefully enough humour in the show to go around. I didn’t want it to be a show about endless mullets and Hypercolor T-shirts.”

As well as selling the series overseas, Sonar was heavily involved in casting Les Norton, bringing together international names in Wilson and Wenham and pairing them with new talent. Bertrand, says president of global distribution and coproduction David Ellender, is a rising star, while the show also boasts Pallavi Sharda, already a big name in India and Australia, who starred in US network ABC’s recent drama pilot Triangle. She plays Georgie Burman, the whip-smart casino manager who was George in the novels.

“Being in LA, you’re very aware of the Australian and New Zealand talent both in front and behind the camera, either in TV or film,” Ellender says. “When you’re doing 10 episodes or fewer, movie stars like Rebel or David can’t attach themselves to a series as they do on network TV, with 22 episodes for five, six or seven years. No theatrical actor would do those sorts of deals. But today, if it’s between six and 10 episodes, maybe for two or three seasons, then people are very open to doing it, particularly if they can go home. Rebel lives in LA but wants to go back to Australia when she can. It’s a great opportunity for actors to do something back at home.”

Sonar’s recent projects include Tom Hardy’s Taboo and German wartime drama Das Boot, both of which are returning for second seasons. Like those series, Les Norton stands out from the plethora of other television series for its style and originality, according to Ellender.

“I was very intrigued by this character going to the big city and falling in with the wrong crowd,” he says. “It was the way Morgan pitched it to me, and I thought the character was one we’ve not really seen for quite some time out of Australia. It seemed to be a really fun crime drama.

“Maybe three or five years ago, Les Norton wouldn’t have been made. But because the way we’re viewing programming today, people are able to make things like this today.”

More than 30 years since Les Norton landed in print, O’Neill says this fish-out-of-water story still resonates, and he’s confident the series can entertain a broad audience.

“There’s a lack of self-seriousness about our show, which I think is going to be a breath of fresh air. That’s certainly our intention,” he says. “We take what we do incredibly seriously, but the tone of the show is quite the opposite. It’s light-hearted and irreverent, and hopefully incredibly cheeky and very funny. For my reading of the way Australians are viewed around the world, that’s partly what we’re known for. I hope there’s an appetite for that.”