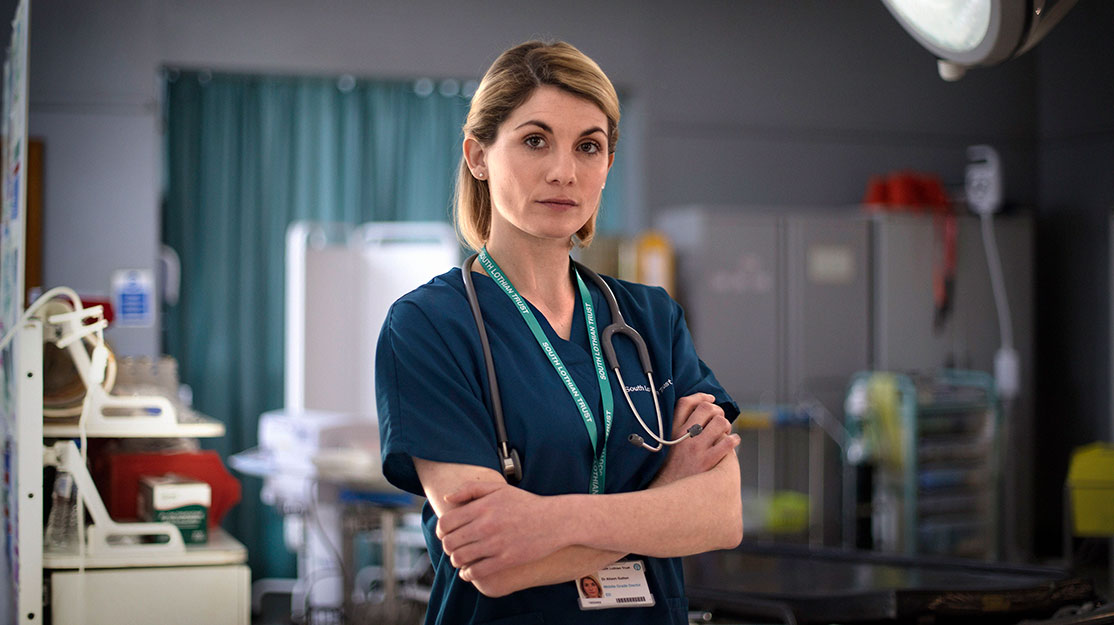 New Doctor Who star Jodie Whittaker plays a medical imposter in Trust Me, a thriller penned by real-life doctor Dan Sefton. DQ hears from the duo about making the show.

Doctorates appear to be arriving like buses for actress Jodie Whittaker, who will become a doctor not once but twice over the next few months.

The actor was recently announced as the 13th incarnation of the BBC’s famous Time Lord in Doctor Who – the first woman to take the prestigious primetime title in the show’s 54-year history. The star, best known for her role in Broadchurch, will replace the outgoing Peter Capaldi when he regenerates during the upcoming Christmas special.

Before then, however, she’ll be seen on BBC1 as another medic as she takes the lead role in gripping drama Trust Me. She plays Cath Hardacre, who, after being suspended from her job as a nurse for whistleblowing, steals the identity of a doctor friend who has emigrated to New Zealand.

She moves from Sheffield to Edinburgh to work as an A&E doctor, but it’s not easy to shake off her past. Not only is she unqualified but her bitter ex Karl (played by Blake Harrison) and a hungry investigative journalist Sam Kelly (Nathan Walsh) are both on her case.

Written by Dan Sefton, best known for ITV’s The Good Karma Hospital and Sky1’s Delicious, Trust Me plunges viewers into a world the writer knows well, as he also works part time as an A&E doctor. StudioCanal is distributing the series internationally.

“As a doctor, I’ve encountered imposters in real life. There was actually one in the department where I worked,” he says. “Often they are well liked and competent; I’ve also met qualified doctors who are frankly dangerous. For me there’s a delicious irony in the idea that the imposter doctor is better than the real thing, both clinically and with patients.”

It took him seven years from first reading a book about imposters to getting his drama made. “My first thought was making it about a pair of identical twins. The story changed in various ways until I came up with the idea of a nurse impersonating a doctor,” he recalls. “The problem was a lot of people didn’t believe it was credible, even though I, as a doctor, was telling them it was credible – there have been so many stories of people doing it.

“It was really frustrating because I knew it was a good idea and I was worried that someone else would get there first. It wasn’t until Red Production Company came on board that they really listened to the story and immediately saw the potential in it.”

Whittaker says she was hooked from the moment she read the first script. “It really fascinated me because it went in a completely different direction to how I thought it was going to go,” she says of the series, which launches on BBC1 on August 8. “At the beginning, when she’s suspended for whistleblowing and loses her job, it could have gone in so many ways. The fact she takes on a new identity isn’t the way I thought it would go. I love the fact that her choices are quite morally dubious; they certainly aren’t black and white.”

Sefton says he looked at US shows where the lead is often an anti-hero. No one walking into an NHS hospital would like to think they are being treated by an unqualified doctor, yet at the same time Cath is good at her job. The story is told from her point of view and the viewer is on her side – at least at first.

“I enjoyed the push-and-pull feel of playing with the audience’s sympathies,” the writer explains. “She is a good person but she shouldn’t be doing this. She’s an honest woman who has done one dishonest thing; there will be consequences. I read a lot about the different types of imposters; there are far more men than women. Men always do it for egotistical reasons; they want to be something impressive. But the women generally do it for a way of getting on in life.

“In this show Cath is giving herself the opportunities she’d never had. But once she’s made that choice, that changes who she is. She begins to like her new life and that’s where it becomes complicated.”

Whittaker agrees: “It’s really interesting to play flawed characters. I would be terrified by the choice this protagonist has made – I’m a crap secret-keeper. Often we are surrounded by people who do things that we don’t agree with. For the audience not to agree with her but still be emotionally behind her is an interesting thing to play.”

Sefton worked as a medical consultant on the Glasgow and Edinburgh set (the show was co-executive produced by Gaynor Holmes for BBC Scotland), helping the cast find their way around a busy emergency department. He also allowed the actors to experiment on him with minor procedures – up to a point where the producers had to step in because they were worried he could sue them for health and safety breaches.

“I kept volunteering to be a guinea pig,” he admits. “But the producers were worried I would get hurt and sue them. I still encouraged the actors to stick needles in me. The only way you understand the tension of doing something like that – of crossing a line – is when you do something like that to another human.”

Although Sefton has scripted medical dramas including Doctors, Casualty and Holby City, he says he deliberately made the medical stories in Trust Me different. “There is a horror show element to it,” he says. “A lot of things Cath has to tackle are the things that still scare doctors. She sees some very nasty cases; they all do.

“In episode two, you see Sharon Small’s character, Dr Brigitte McAdams, talk about the patients she has killed and how much that has affected her. People know about medical mistakes but don’t see how it can also hurt the doctors.

“Because this drama isn’t about the medical stuff, there is a nihilism which you don’t normally get as you don’t need to resolve the medical stories. In real life there is often no easy answer, there is no meaning to the problems people come in with. They aren’t resolved. I want this to be a tough watch because even though she is doing a bad thing, she is still turning up there every day to help people.”