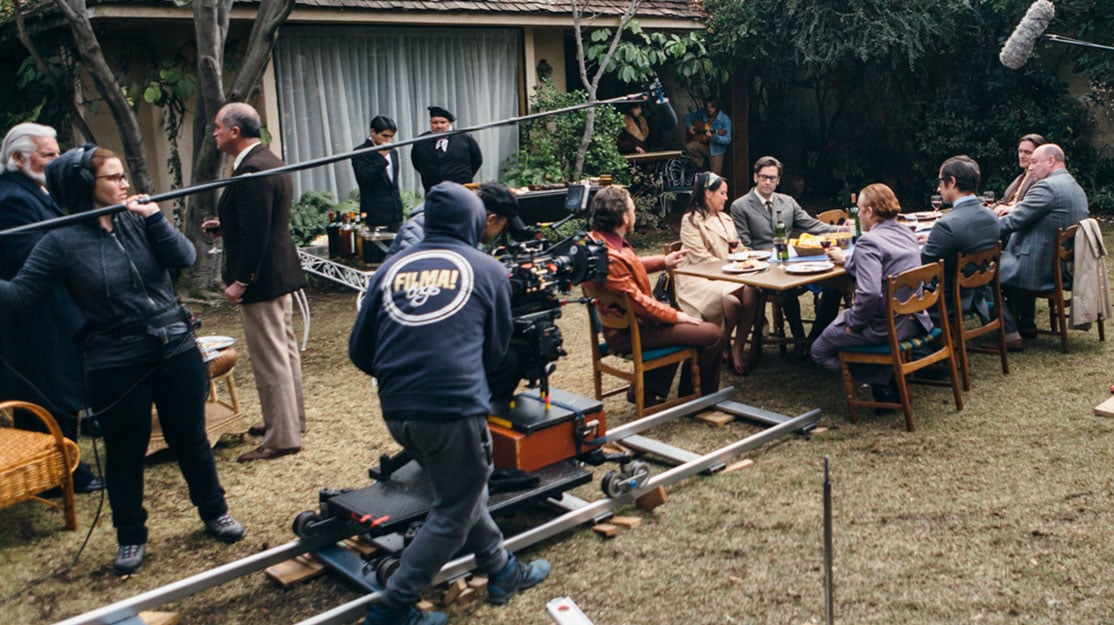 If the challenge for television executives in today’s crowded drama landscape is to find local stories that have the potential to resonate with international audiences, Finnish public broadcaster YLE is leading the way.

Currently in production is The Paradise, a crime drama set among the ex-pat Finnish community living in the Spanish town of Fuengirola, dubbed the Finnish capital of Spain. It is due to air on YLE this autumn.

Before then, the network has earmarked a spring launch for Invisible Heroes, a political thriller set in Chile during General Pinochet’s military coup in 1973.

Inspired by true events, the story follows the remarkable exploits of Finnish diplomat Tapani Brotherus who, while working in secret, helped secure asylum in Europe for more than 2,000 Chilean citizens whose lives were under threat.

It’s based on a story that was “hidden for 35 years,” says Finnish screenwriter Tarja Kylmä, until a documentary about Swedish ambassador Harald Edelstam gave some clues to Brotherus’ actions. A book was then published about him in 2010, which caught the interest of YLE’s head of drama Jarmo Lampela.

“One day when I was cleaning snow out of my garden and he [Lampela] just arrived with a book and said, ‘Read this, it’s wonderful. If you like it you can write it,’” Kylmä recalls, speaking to DQ at Série Series in France last year. “I read it and it’s a wonderful story. I did some interviews and found some more interesting material that was not in the book, about this great love story between two youngsters, and then I started writing.”

Owing to the source material, the story was the perfect coproduction opportunity. Finland’s Kaiho Republic partnered with Parox in Chile, with YLE commissioning the drama in association with Chilevisión. Kylmä was also paired with a Chilean writer, Manuela Infante, who was able to help with research and add an authentic Chilean voice to the story, which mostly takes place in the South American country.

“I’m the main writer so I made the big decisions about the characters, but we did have different layers because she was writing the Chilean approach and I was writing the Finns and they had to meet all the time, so it was a very good collaboration,” Kylmä says. “I loved it. Manuela’s a theatre writer so she loved the very close collaboration.”

The screenwriter travelled to Chile to outline the series with Infante in November 2017, discussing the central character of Brotherus and the decisions that led to actions. She describes him as an idealistic diplomat who heads to the capital, Santiago, to make trade deals. But when the coup begins, he has to make a quick decision about whether to help hundreds of refugees escape the country, eventually securing them safe passage to Finland and East Germany while acting against Finnish policy.

“He’s told to send them away so he has to do it illegally. He might lose his job doing that so it’s a story about finding your voice and finding the courage in yourself,” Kylmä says. “After keeping them hidden from his government and Pinochet’s military forces, there’s another problem because what is he doing if he’s sending them safely to Europe? Is he making the resistance weaker? So there’s a dilemma in those people leaving. What is he doing to this country if he’s hiding them and sending them away? So it’s this battle inside him, while he’s also trying to protect his family from harm.”

The six-part series, which has been picked up for international distribution by Stockholm-based Eccho Rights, never strays far from the truth. In fact, the names of the characters are the names of real diplomats, many of whom had the chance to read the scripts. But as you might expect with any television drama, there are some fictional moments woven into the story. Kylmä says that after she completed her research, the real people involved became her characters to play with. “It has to be drama driven and not fact driven,” she notes. “It’s difficult [for the real people] when you know the wall wasn’t blue or something, but they accept it.”

Invisible Heroes is another entry into the increasingly popular trend for factual drama, alongside series such as Tokyo Trial, The Interrogation of Tony Martin and A Very English Scandal.

“It’s very important because we’re talking about refugees here and how to accept them in our country,” say Kylmä, noting the topicality of the subject. “It’s a problem for all of Europe, and suddenly we have something like this that happened in the 1970s. It’s the problems we are facing now. It’s a great trend because we can have distance but still wonder, ‘How would I have reacted in that situation? How could I have helped?’ We can face the questions in the present tense in drama.”

The writing process took 18 months, beginning in January 2017. “It was fast. I researched and wrote, we made the outlines together [with Infante] and last spring was all out writing,” she continues. “This is like a film in six parts. I felt my role was a typical screenwriter. We cooperated with the directors — Mika Kurvinen and Alicia Scherson — and when filming started, we handed the baton to them.”

It was during trips to Chile that Kylmä was able to visit all the real locations featured in the story and grasp the mood of the country in the 1970s. There was also daily communication between Kylmä, Infante and producer Leonora González, who read scripts and gave notes. “With the time difference, you’re working two shifts because I work morning and afternoon in Finland and then the day starts in Chile and they start sending questions,” she reveals. “When I wake up in the morning there are more questions. The DOP is Finnish and the main director but the rest of the team is Chilean. So the director has been meeting them so he knows what’s going on.”

Scriptwriting also took more time as the story features dialogue in Finnish, Spanish, Swedish and German. Kylmä wrote in Finnish, Infante wrote in Spanish and then translations were made from one to another. Then the dialogue was edited to include all languages. “We have to be honest to the language they used. They didn’t speak English in 1973 Chile,” the writer adds.

Liselott Forsman, YLE’s executive producer of international projects, comes from a background of coproductions, having worked for the Swedish arm of YLE for many years. “We coproduced everything because we had such a small budget,” she says. “But it was very easy because the Nordics were there, and also with the Baltic countries we had natural European coproduction partners.”

But when she moved to the network’s Finnish department almost six years ago, “people told me it’s not possible to coproduce in Finnish. It’s easy when you’re Swedish. Then Danish dramas started to air in countries that had never heard the Danish language before,” she says. “That was really nice. Everything was getting more international, so in the past five years it has really been a booming thing. It would have been much more difficult [to make Invisible Heroes] five years ago but now it’s exactly what everyone wants to do.”

Forsman says YLE’s Lampela, who speaks Spanish, was keen to find a Spanish-language project, while Parox proved to be an exciting partner, owing to the advancing television production cultures in both Chile and Finland.

“Of course there are language problems but nothing major,” she says of production. “Things have changed in Latin America, and one thing is the acting. Usually in melodramas, the acting was very different, it was not as naturalistic as we are used to in the Nordics. Now when you put actors from two cultures together you have to find the right way.”

Liisa Penttilä-Asikainen, executive producer at Kaiho Republic, adds: “Creating a series with such a global cast, and production teams from countries as different as Finland and Chile of course had its challenges. But the amazing story that we are telling brought everyone together and the input of such a culturally diverse creative group really aided us in bringing this extraordinary series of events back to life.”