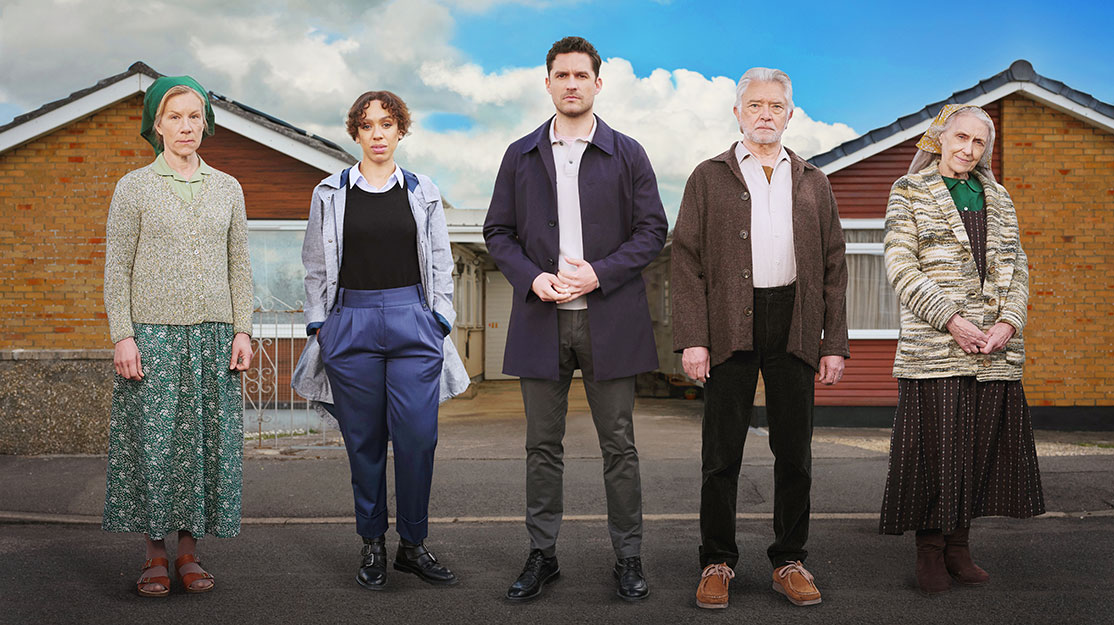 The cast and crew of ITV crime drama The Long Call take DQ behind the scenes to discuss adapting Ann Cleeves’ novel, filming in a car showroom and the birth of ‘North Devon noir.’

Under normal circumstances, there would be nothing remarkable about a former car showroom on a busy road in England. That cannot be said, however, for one in Bristol where more is lurking than a pile of discarded tyres and empty packets of ready salted crisps.

Instead, it has been transformed into various sets, from a hospital to the interiors of old-fashioned bungalows, for ITV’s latest crime drama offering, The Long Call.

When DQ is given a virtual tour of the “stylish” set in May this year, the cast and crew are in week six of seven of filming in the city, before they complete the final three weeks of the shoot in Devon.

“We didn’t want your bog-standard 60s or 70s office block that happens to be empty and handy for filming,” explains producer Angie Daniell (Vigil, Alex Rider), speaking from the police station set. “[The décor] is slightly heightened and we’ve used a lot more colour, like greens, purples and so on, because we didn’t want just navy blue.”

While describing herself as a fan “from the get-go” of Nordic noir, Daniell says the colour palette was part of a drive to distance The Long Call from the genre. “I’m not putting Scandi noir down, but it has been so influential that now it’s becoming, dare I say, a bit of a trope. We want to create North Devon noir,” she notes. Instead, influences were largely drawn from photographers, including Martin Parr, Stephen Shore and William Eggleston.

Some of the North Devon scenes have also been filmed in Bristol. “We have cheated a lot,” jokes Daniell. “We did a beach scene at a rocky cove near Clevedon, and you can see the pier in the distance. The character Jen also has a family house with her two kids with the sea in the background, and that was actually shot in Portishead.”

When the crew start shooting in Devon, Daniell is aiming to make the most of the natural landscape. “We’re hoping the weather gets better because we’ve got beautiful scenes like a full-immersion baptism in the sea and ones of the lead character swimming, because he lives in a beautiful house by the sea that he and his husband are doing up.”

Distributed by ITV Studios, the four-part drama follows Detective Inspector Matthew Venn (Ben Aldridge) as he returns to the North Devon town where he grew up for the first time in 20 years, accompanied by his husband Jonathan (Declan Bennett). Rejected by his mother Dorothy (Juliet Stevenson), who is a member of the fictional Barum Brethren religious community, Venn is forced to re-examine painful memories and relationships – all while leading a murder investigation.

The series, produced by Silverprint Pictures and coproduced with BritBox North America,  has been adapted from Ann Cleeves’ novel of the same name. It is the third adaptation of a Cleeves book from ITV Studios-owned Silverprint, which is also behind long-running dramas Vera and Shetland.

Silverprint creative director Kate Bartlett, an exec producer on The Long Call, says Cleeves trusts the company with her books thanks to their near-decade-long working relationship. “We no longer adapt books for Shetland, it’s all original stories, as it is now on Vera too,” she says. “We do occasionally go back to a book if Ann has released another one.”

Stevenson was advised against reading the book by the show’s director, Lee Haven Jones (Doctor Who), while preparing for the role of Dorothy. Normally, she would read the source material because it’s “free research,” but “Lee said it wouldn’t be particularly helpful for Dorothy,” the actor says. “The writer, Kelly Jones [Des], has gone her own way with the character.”

For Stevenson, The Long Call marks her first “proper” filming job since the UK first went into a Covid-19 lockdown last year, and she admits the role is a “big stretch,” adding: “It’s a really big challenge for me to play somebody whose every life decision is shaped by their belief in God, an ultimate higher authority that you don’t question.”

The world of the Barum Brethren, both ideologically and visually, is a stark difference to the rest of The Long Call. Part of the former car showroom in Bristol has been turned into the interiors of bungalows occupied by members of the community, which includes church elder Dennis Stephenson (Martin Shaw) and his wife Grace Stephenson (Anita Dobson).

Sourcing the bungalows, however, wasn’t easy. Initially, Daniell wanted to film in a real home, but it proved difficult during lockdown in January this year. “We were trying to find bungalows at the start of the year when there was a strict lockdown in England. Bungalows are normally lived in by the elderly, a lot of whom were shielding, so we literally couldn’t get through the door,” she explains. The solution was to build their own.

Shaw describes the bungalow set as “without an expression of personality.” That’s certainly the impression they give, painted and decked out with ornaments in varying shades of grey. “It looks like the stuff has been put together from a charity shop,” Shaw continues. “Would it be accurate to call it spooky?” This last question is directed to Dobson, who agrees and calls the atmosphere in the bungalows “oppressive.”

Wearing full costume and make-up, Dobson looks unrecognisable. “I’m wearing the attire of a woman who does not wear anything remotely glamorous,” she says. “There is no adornment, no jewellery. The hair is unkempt and long. Everything is covered up and the shoes are flat. Grace is not into worldly possessions or a portrayal of a worldly self, so it’s quite interesting for an actress. There’s a great sense of joy in revelling in that and this woman that I would never, ever be.”

The opposite is true for Aldridge, who was drawn to the role of Venn because he shares “coincidental crossovers” with the character. Like Venn, Aldridge was raised in Devon, is gay and has familial connections to a Brethren community. “My parents were in the Brethren but left just before they met aged 18 and I was raised as an evangelical Christian. Having moved away from that myself, I understand the journey of faith progressing beyond Christianity and that kind of separation,” he says.

“That the character is gay is interesting because our journeys share quite a few similarities. It’s definitely involved some self-examination and [brought up] things I’ve chosen not to think about. I’ve also never watched a crime drama where there’s a gay character who is the lead detective, so The Long Call is something to be celebrated and I feel proud to be a part of it.”

All the actors heap praise on Haven Jones for creating a “collaborative” and “harmonious” working environment. Former Doctor Who star Pearl Mackie, who plays Jen Rafferty, a detective sergeant working on the murder case alongside Venn, sums him up as “an actor’s director.”

“We rehearse quite a lot, which is really wonderful and something that doesn’t always happen,” she says. “On set,  everyone feels really comfortable and is free to ask questions, talk about their opinions and really get to grips with what’s going on in the subtext.”

The only peculiarities on production are the measures in place to curtail the spread of Covid-19. “But there’s a certain camaraderie in doing a job under very different circumstances and all the crew needing to wear masks all the time,” Mackie says. Both Mackie and Stevenson joke about failing to recognise crew members with whom they spent considerable time when they have later seen them without masks. “Every time you see one of the team take a mask down to eat a sandwich, you think, ‘Oh my God, I’ve built a different face for you behind your mask,’” Stevenson laughs.

Aside from adapting to the restrictions, the biggest challenge on set, according to Aldridge, has been not to laugh. “There is such a fun and playful vibe on set, and maybe that comes out of us actors because we are dealing with such heavy and serious material,” he says. “The word ‘cottage’ got changed to ‘chalet’ in the script while we were filming and, for some reason, whenever I said chalet, the others just lost it.”