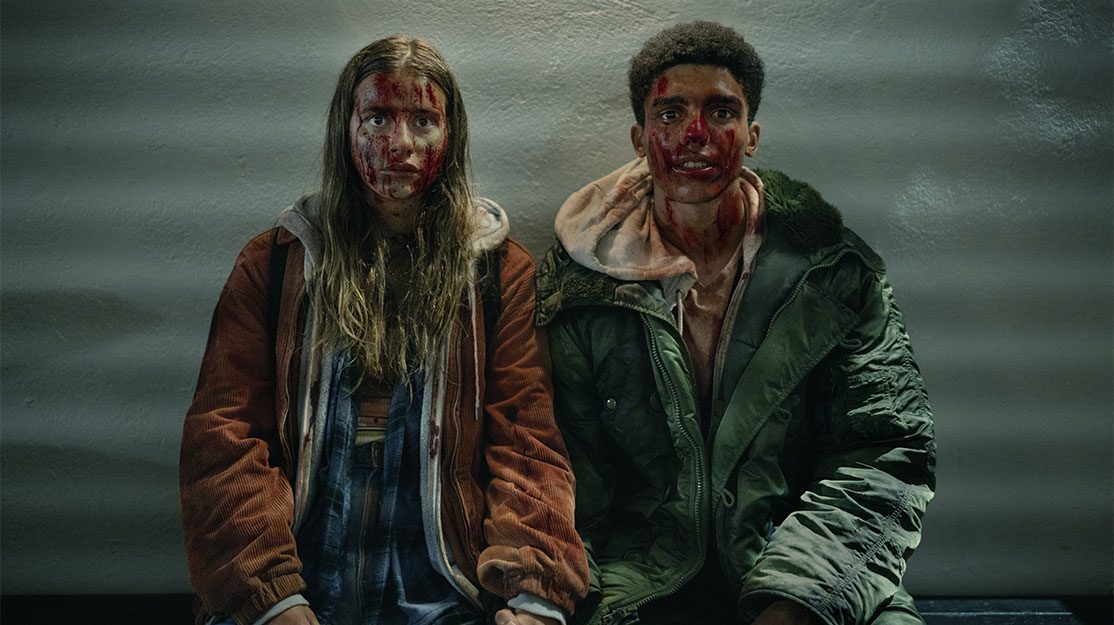 Pop duo Let’s Eat Grandma turned composers to create the haunting soundtrack to Netflix fantasy drama The Bastard Son & The Devil Himself. They join writer Joe Barton to tell DQ about their collaboration for the show.

When he was writing both BBC crime drama Giri/Haji and Sky’s time travel spectacular The Lazarus Project, there was one piece of music Joe Barton tried to get on the soundtrack. On both occasions, however, Let’s Eat Grandma track Whitewater failed to land in the final cut.

But on his latest project, Netflix fantasy series The Bastard Son & The Devil Himself, he discovered he shared his love of the song with lead director Colm McCarthy. Together they then conspired to not just use Whitewater for the show, but ask Let’s Eat Grandma to compose the entire soundtrack.

Learning both he and McCarthy were fans of the group was the moment Barton says he knew the show’s key creatives shared the same ambition for the type of show they wanted to make.

The result is a composition that leans into duo Rosa Walton and Jenny Hollingworth’s trademark electronic pop and provides an entrancing, pulsating and emotional backing to Barton’s writing and McCarthy’s visuals.

“Their music feels authentic and youthful,” Barton tells DQ. “It’s always been this down-to-earth, grounded version [of a fantasy show] and this is the music that feels relevant and interesting that matched the philosophy of making the show. It was incredibly exciting when they said they were interested and they’ve done an amazing job.”

Based on Sally Green’s Half Bad novels, The Bastard Son & The Devil Himself is a darkly humorous, romantic, roller-coaster ride of a story that introduces 16-year-old Nathan (Jay Lycurgo), the illegitimate son of the world’s most dangerous witch. Fearing he will follow in his father’s footsteps as a Blood witch, the rival Fairborns constantly monitor Nathan as he grows up under the care of his grandmother.

But as his 17th birthday approaches, the date on which he will receive his powers, he takes a chance to escape the growing feud between Blood and Fairborn witches with the help of mischievous Annalise (Nadia Parkes) and charismatic Gabriel (Emilien Vekemans) in a story that blends magic, realism, friendship and love.

Let’s Eat Grandma had just finished writing their latest record, Two Ribbons, when they received the first email about joining the project. They immediately loved the concept behind the show and the first scripts the read.

“It became a great new focus which felt very different to the album-writing process. We thought the concept behind the show was really cool and that it fit with our music really well too,” says Hollingworth. “Our musical foundations are very much built on being in a band but we are also both very keen to explore new directions musically and so it was exciting to do something different by creating a soundtrack.”

The school friends formed the band in 2013 and although primarily known for making pop music, they have experimented with a number of different styles and genres.

Their songwriting process is “constantly evolving,” continues Walton, “in a way which feels natural, depending on what’s going on in both of our lives at the given time. When we started the band we were so young and did everything together, but more recently it feels like we’ve given each other space to explore the sort of music we each want to make individually, whilst still supporting one another and everything we make still feels in a way like it comes out of the foundation that we built together in the first place. For the soundtrack, we designed a lot of the sound world together at the beginning of the process and later worked on it separately.”

One of Walton’s favourite moments was writing the music for the opening credits sequence, which she says was a “really fun and specific challenge” – creating something that would sum up the entire show while also building a sense of drive and excitement.

“I also loved writing for the romance scenes, because a lot of them are based on finding a romantic connection out of sadness, which I think is a really interesting idea, and I found writing music that gets to the emotional core with those scenes really rewarding,” she says.

Let’s Eat Grandma began creating the score before filming on the show had begun, so rather than writing to pictures, they worked on building a “sonic palette” that would run through the whole soundtrack.

“Colm and Joe sent us some references, which included our first record, I, Gemini, and so we incorporated a lot of instruments we used on that record, such as the mandolin and our old keyboards,” Hollingworth explains. “People often describe our sound especially on that first record as ‘witchy,’ so it was fun to pull elements from it. We also used our voices a lot in the soundtrack, sometimes to add a bit more of a ‘haunting’ feel, and also because our voices are a signature part of our sound.”

Colm would meet with the band and give them “concise direction” while also leaving them with room to bring their own creativity to the project. They also met with Suri and Paterson later in the shoot to go through specific episodes and discuss what might be missing.

“It’s certainly been a very informative process and a wonderful new experience, which has shaped and broadened the way we write and think about music,” Walton says. “We’re always looking for ways to move forward musically, and being part of a bigger project with lots of other people all working creatively in different ways has been so valuable and inspiring.”

The otherworldly soundtrack from Let’s Eat Grandma elevates a series Barton had been working on as far back as 2015, when he was first given Green’s novel Half Bad. Originally conceived as a movie, the project stalled as a feature but then, just as Barton’s BBC and Netflix crime drama Giri/Haji was airing in 2019, it was resurrected as a series.

The writer hadn’t trodden too far into fantasy before and liked the book’s blend of three friends fighting against the odds. He was also drawn to its coming-of-age and found family themes, as well as the cross-European journey the trio embark on mid-way through the story.

But in an already crowded market of fantasy and young-adult series – Netflix is the home of The Witcher, Shadow & Bone and Fate: The Winx Saga, among others – his biggest challenge was ensuring The Bastard Son & The Devil Himself could stand out from the crowd.

The key to this was grounding the series in a real world, albeit one populated with witches who possess a variety of powers – either valuable, mundane or downright terrifying.

“It’s more grounded in terms of it’s a fantasy story that takes place in the real world, whereas often the rest take place in fantastical worlds,” he says. “Colm instantly wanted to have that grounding in the look and feel of it, that real-world texture, which comes down to the lenses and the filming styles he used.

“We were lucky, in a way, that we were commissioned for the UK branch of Netflix. The American branch has a much stricter set of criteria about what cameras you can use and how your show looks. Quite a lot of these shows do have a similar kind of sheen to them. But because we weren’t under any of those specifications, we were free to make the show look a bit different and try to carve our own space.”

Barton describes his take on Green’s novel as a “spiritual adaptation,” which he admits makes numerous changes to the book and has a plot that quickly diverges from its source material.

Central to the story is the triangle of Nathan, Annalise and Gabriel. Early on, the focus is on Nathan, as those around him fear the man he might become, while the countdown to his 17th birthday gives the story a natural drive.

Meanwhile, Annalise is the daughter of Soul (Ready), a high-ranking Fairborn witch who becomes the chief antagonist, desperate to stop Nathan from becoming his father’s son. Through the series, Annalise is also coming to terms with who she is as she finds she has the power to literally tear objects, and people, apart – scenes that lead to some of the show’s standout, blood-soaked VFX scenes.

“A lot of it is that teenage thing that your body is changing; she’s coming to terms with who she is. And it’s the same with Gabriel, who is a slightly lost character who finds a bit of a family with these other two,” Barton says. “It’s also about their romantic relationships – Nathan and Annalise have a thing by the end of the series, and one of the interesting things in the book is Nathan discovers he’s bisexual and his relationship with Gabriel becomes more romantically inclined.

“I liked the possibility of telling and interesting and complex story about those characters and their feelings for one another without making it too rote or obvious and just dealing with that complexity. There’s all sorts of stuff going on between the three of them which is at the heart of the show.”

After writing The Lazarus Project on his own, Barton assembled a team of writers – including Emer Kenny (Karen Pirie), Ryan J Brown (Wreck), Helen Kingston (The Flood) and Dionne Edwards (Pretty Red Dress) – to help pen the eight-part series. With a writers’ room taking place over Zoom during the Covid pandemic, Barton ensured the project was always respectful to Green’s novel while making the changes needed to bring the story to a new medium.

“You just have to take it and take what the central hub of it is and then just run off and do your own thing. Sally was very happy for us to do that with her book,” says Barton, who has previously worked on adaptations of The Ritual and iBoy.

On the back of Giri/Haji, The Lazarus Project and now The Bastard Son & The Devil Himself, Barton is one of the UK’s most in-demand writers. He is currently working on the latest instalment in the Cloverfield film franchise, while Our Man From Jersey – his Netflix action-thriller film starring Mark Wahlberg and Halle Berry – recently wrapped production. The Lazarus Project will also return to air next year.

But while there may be a thread through his line of uniquely original work – engaging characters, intricate plots and ever-present humour – he notes how a writer’s career is really carved by the people willing to commission his work.

“There are shows I desperately wanted to follow Giri/Haji with but I couldn’t get them made. Maybe they were a bit weirder but I could get the show about time travel made, I could get the show about witches made and that becomes your career through line,” he says. “I’m looking at the moment to get slightly odder, quirkier projects away, but I’m doing Cloverfield and in talks with some big franchise people. Ideally, I’d just like to have a balance and do big things and little things, but you are slightly at the whim of your commissioners.”

Fans of The Bastard Son & The Devil Himself will be hoping Barton also gets a chance to return to the series, which ends with the fate of its heroes left only somewhat resolved.

“We’d like it to come back; we’ve got plans for a second season. As ever, it’s in the hands of Netflix and the decision makers,” he says. “Fingers crossed, we’d like to do more.”