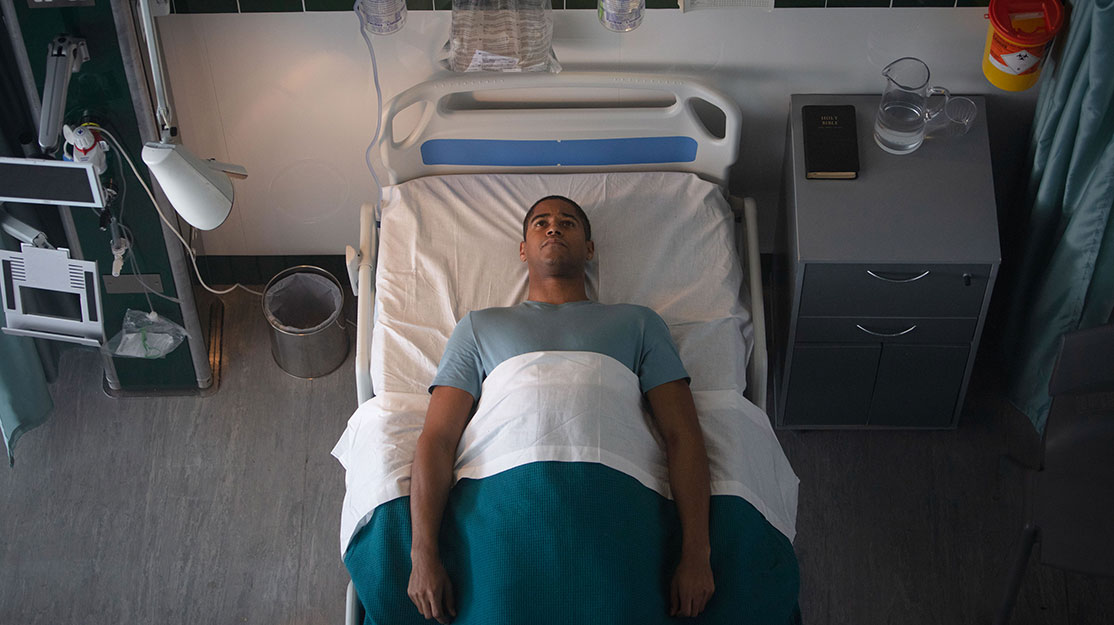 Dan Sefton, creator and writer of BBC miniseries Trust Me, talks about the show’s evolution into an anthology after losing its star and explains how the second season has been inspired by the work of Alfred Hitchcock.

When Jodie Whittaker was unveiled as Doctor Who’s first female lead in July 2017, it proved to be a huge boon for the team behind another BBC series starring the actor, which happened to be launching just a couple of weeks after the announcement.

Trust Me went on to draw a consolidated average of six million viewers over its four-episode run, with writer Dan Sefton’s thriller following Whittaker as a nurse who, after losing her job, steals a doctor friend’s identity to start a new life in Edinburgh.

But while Whittaker was swept up in a wave of Whovian anticipation, Sefton was left to work out how a second season of Trust Me might shape up without its lead.

“It’s one of those things that happened,” he says stoically. “Jodie was the standout in the whole of the first season. She’s a brilliant actress. We had ideas of how we could carry it on, but when it was announced she would be playing the Doctor, we realised that would be almost impossible.

“But the BBC were very keen to keep the conversation going because it had been such a big hit. So we pitched them something brand new and, luckily, they thought it was a good idea – and here we are. If this one is popular, we can keep going and dig into the dark side of medicine in lots of different ways.”

That idea of shining a light on medicine’s dark side has become a key building block for the series. Season one saw Whittaker’s Cath work in a hospital, treating patients and performing operations, having presented herself as a different – and more qualified – medic. Season two, which debuted on BBC1 this month, moves to a Glasgow hospital, where Corporal Jamie McCain (played by Harry Potter’s Alfred Enoch) is recovering from a spinal injury that has left him paralysed. When patients on the ward begin to die suddenly, Jamie believes a killer is striking in the hospital – but his injuries make his investigation dangerous and difficult. John Hannah, Ashley Jensen and Richard Rankin also head the cast.

When he looked back at season one to identify a DNA or formula that he could extract and apply to season two, former doctor Sefton says he was drawn to the things people fear in hospitals.

“The whole point is these storylines are edgy and tense and you can’t believe they would actually happen,” he explains. “Season one was the story of an imposter treating you in a hospital, and some people really found it unpleasant. The idea that a healthcare professional could be a murderer and people could be killed in hospital is also a horrible idea, especially when you’re at your most vulnerable. It does happen; it’s not common, but it does happen. So that was the common thread we picked up on.”

With that in mind, the story quickly became a version of Alfred Hitchcock’s 1954 classic Rear Window transplanted to a hospital, with an immobile patient trying to snare a suspected killer. John Alexander directs the season, which is again produced by Red Production Company and distributed by StudioCanal.

“I’ve always said it’s two stories at the same time, kind of like two movies,” Sefton continues. “You’ve got the thriller movie of somebody up to no good in this hospital, somebody murdering patients, and the question of who is it and can they be stopped. Then you’ve got a movie about somebody whose life has completely changed after a spinal injury. How are they going to cope, and what challenges do they face psychologically?

“It’s a tricky form because, on the one hand, a thriller is always pushing you to go to the next thing as quickly as possible. That’s a balance you have to try to strike in these shows, because you don’t want the audience to be bored. With four hours, you want to really dig into the character and work out what makes them tick. Through the whole process of writing and editing, you’re trying to keep the pace up and also to have enough time to get into his background and why he is where he is.”

The Hitchcock influence goes beyond just the story, also permeating the gothic set design –Jamie is on the James Stewart wing of the hospital, which shares its name with the frequent Hitchcock collaborator who starred in Rear Window. It can be heard, too, via the use of strings in the music. The drama also bears a touch of horror, with Sefton, who admits he’s a “massive fan” of the seminal British director, hoping to keep viewers feeling uncomfortable throughout the drama.

“Everybody doing it has just paid a little homage to him in the writing, the directing and the music, but hopefully not to the point where it’s a pastiche but an acknowledgement that Rear Window was there and this idea of somebody stuck trying to remotely sort something out is interesting,” he notes.

The fact that lead character Jamie is either in bed or largely immobile for much of the four-hour running time made the writing process tough for Sefton. Jamie’s journey to recovery is slightly accelerated to make the drama work, but the Sefton was keen to realistically depict the difficulty of overcoming a spinal injury.

“The first episode is [almost entirely] in that hospital room and we found it quite challenging because you’ve got to keep giving him interesting things to do – the idea that just reaching over and getting a glass of water is a massive challenge for someone who’s hardly moved in five or six weeks. If people buy into that small challenge being massive for this character, hopefully you’ve got an interesting thriller set up where crawling across the floor is like walking across a bridge for somebody else, or scaling a mountain. That was the idea, but it was tricky.”

In fact, Sefton highlights one such scene as a standout from the entire show. It takes place towards the end of episode one, when Jamie is forced to crawl across the floor in a desperate attempt to retrieve evidence he thinks could point to the killer.

“I think it works really well,” Sefton asserts. “It’s a combination of it being written that way, John directing it brilliantly and Alfie performing it, and then the music has the ‘Hitchcock strings.’ That’s the time I got a tingle – you felt it was playing out like one of those classic thrillers where you’ve got the building crescendo of the music. And even though he’s just crawling across the floor to grab this iPad, it’s the biggest thing. I really like that.”

Sefton says the scene works because of the combination of his script and the vision of Alexander, who directed all four episodes of this season having helmed two for the first run. But he doesn’t think the visual style of a series, which airs episode three tomorrow and is available on BBC iPlayer, is entirely down to the director, believing writers should also be encouraged to think visually.

“That’s the biggest misconception of screenwriting – that you just write the dialogue and the director does everything else,” he adds. “That’s absolutely not true. Screenwriting is all about what happens. It’s about actions, what people are doing – what they’re saying is actually quite peripheral.”