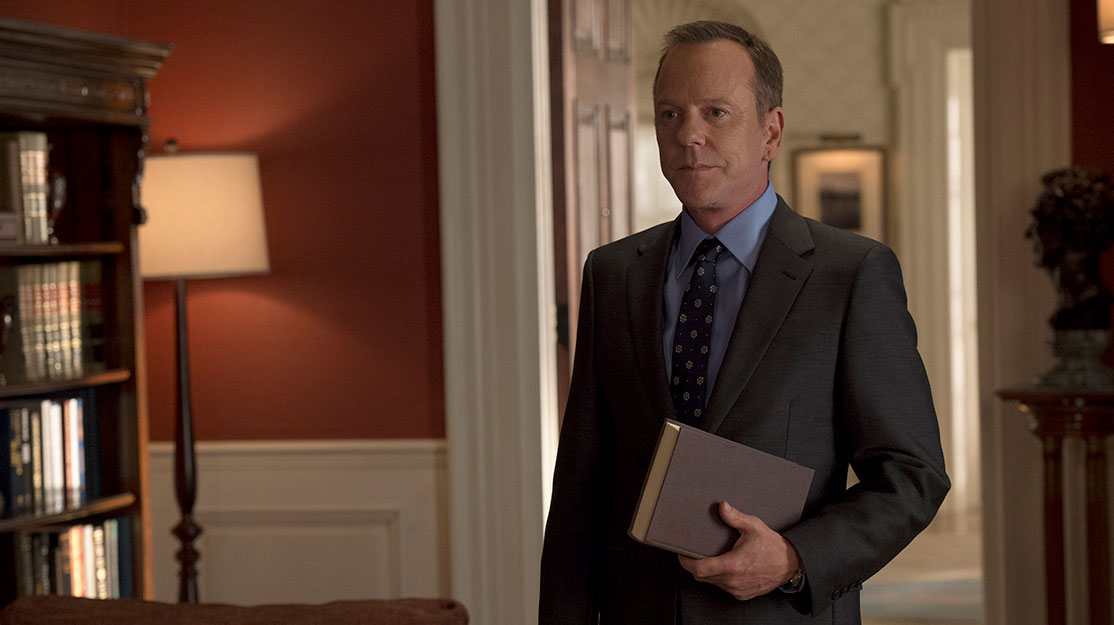 As the newly appointed showrunner of White House drama Designated Survivor, Keith Eisner is taking the series in a new direction. He tells DQ about his plans for the ABC show, comparisons to The West Wing and making a political drama in the era of Donald Trump.

Designated Survivor launched last autumn with the huge expectation that came with seeing 24 star Kiefer Sutherland playing the character that, until recently, he was usually tasked with saving – the president of the United States.

But for the most part, what began as a mix of political drama, thriller and family saga settled into familiar rhythms of the show that made Jack Bauer a household name – a terrorist plot, conspiracies and double-crossings, only without the iconic digital clock counting down.

Yet when the ABC series returns for season two on Wednesday, September 27, viewers should expect a markedly different show under the stewardship of new showrunner Keith Eisner.

“The show was very much a thriller last year,” he says. “We’re broadening that to make it much more of a West Wing-type White House drama, which very much deals with the events that a novice president would face on a week-to-week basis, while still retaining a lot of what people loved about the show and involving more intrigue this year than gun-toting antics every week.”

Sutherland stars as Tom Kirkman, a lower-level cabinet member who suddenly finds himself appointed president after a catastrophic attack on the US Capitol during the State of the Union. Season one saw him struggle to keep the country and his family together while leading the search to find those responsible for the attack.

It concluded with a major cliffhanger involving the suspected conspirator, and Eisner promises that storyline will be resolved over the first few episodes of season two, despite the show restarting six months on from the events at the end of season one.

“We felt very much that last year was the story of a Mr Smith Goes to Washington-type character, a deer caught in the headlights,” Eisner says of Kirkman’s sudden elevation to commander-in-chief. “We really wanted to ground the president a little bit more [this season]. We still centre on our theme – an ordinary man caught in an extraordinary situation – but we wanted him to find his feet a bit as president.”

To that effect, “White House stories” will feature much more prominently in a show designed to be faster and funnier, with a bit of romance included too. The expanded cast includes White House counsel Kendra Daynes (played by Zoe McLellan), political director Lyor Boone (Paulo Costanzo) and British MI6 agent Damian Rennett (Ben Lawson), who could prove to be a love interest for Maggie Q’s FBI agent Hannah Wells.

It’s all part of the distinct vision Eisner has for the show, which he joined in May as the series’ fourth showrunner in just a year, following Amy B Harris, Jon Harmon Feldman and Jeff Melvoin. “I thought the show was terrific last year but the difficulty is there are only so many ways to try to kill the president,” he tells DQ during a break from rewriting episode six.

“In terms of making sure this was a show that can run for many years, it was about broadening that storytelling base. We’re well into our new journey here, we’re excited about it and we have the secret weapon, the fantastic Kiefer Sutherland. He was so good last year – wait until you see what he does this year.”

Eisner’s career working on shows such as The Good Wife, NYPD Blue, Law & Order and Gilmore Girls points to the type of stories he will seek to bring into the show, while he says he also wants to make it more aspirational for viewers: “In these times, it is not a bad thing to see a president that wrestles with difficult decisions but is someone we admire and see trying to do the best he can in every situation.

“He doesn’t always make the right decisions; that’s part of the game and one of the things Tom Kirkman wrestles with on a week-to-week basis. He also wrestles with family issues, which are coming a little bit more to the fore, as does his marriage. We are doing personal stories for all our characters, so we will go outside the confines of the White House to see them and to see their lives and become more invested in them.”

Of course, Designated Survivor is now operating in a world where the real White House has the kinds of storylines and plot twists than a screenwriter couldn’t dream of. How, then, does Eisner plan on running a political drama in the era of President Trump?

“We’re not trying to be an express commentary on the Trump White House,” he says. “We’re trying to be our own story about our own president, who always tries to do the right thing in difficult situations. Having said that, there are obviously issues in the real world that we can’t be blind to, because they inform our drama. Without being an express commentary, there might occasionally be parallels or situations where we see how our president reacts in a similar situation and whether he reacts differently or in the same way.

“We think, more than anything, the attention given to the White House in 2017 is a great opportunity for us to portray a different kind of White House perhaps, but a White House also struggling with a lot of things that perhaps the Trump administration struggles with.”

However, it’s a fictional White House that will likely have more bearing on Designated Survivor’s new direction. The success of NBC’s The West Wing has cast a long shadow over other political series ever since the Emmy-winning show began in 1999, “but it’s not a bad shadow,” Eisner admits.

“The things that Aaron [Sorkin, The West Wing creator] pioneered are very much part of the tapestry now – the ‘Walk and Talks,’ the humour. One embraces that, one doesn’t shy away from it. What’s very different was The West Wing was 20 years ago. The world has changed and how we deal with issues and social media and the speed of everything informs a different type of storytelling.

“We’re also different because we have a component The West Wing never had, which is this thriller/action/intrigue component built into the show, and that will continue to be part of the show and makes it very different. We have everything we feel The West Wing had but we have this additional component, so the cocktail of the show tastes different.”

There are some limits to the changes Eisner is bringing in. Fans around the world who tuned in to binge Designated Survivor on Netflix, following a worldwide deal with distributor Entertainment One, will be happy to hear that the series will retain its serialised elements, with plenty of jeopardy and cliffhangers still to come.

“I don’t think anyone who watched the show last year will be disappointed because there’s going to be a lot of what they love,” the showrunner says. “People will want to continue to binge it because some of the serialised stuff will still be there. But the other advantage in terms of broadening the base is if you’re not one of those people who binges on shows but occasionally likes to check in, there’s a standalone component to the show this year that will allow you to not know everything about the mythology we built up and still enjoy the show as a standalone episode.”

With his time spent on The Good Wife and Law & Order, Eisner has learned his craft by working with acclaimed showrunners including Michelle and Robert King and Dick Wolf, respectively. As such, he admits is “very story-driven and character-driven as a showrunner,” adding: “I arc things out, I focus on real human behaviour and make sure it’s relatable and complicated, but I like conflict too. The shows I’ve worked on have dealt with that a lot.

“I’m very much focused on producing a television show that deals with conflict and emotion. I think people will find the show very emotional this year. The stories will climax in, we hope, very surprising ways that will move you and make you laugh, hopefully make you think and occasionally scare you a little bit too.”