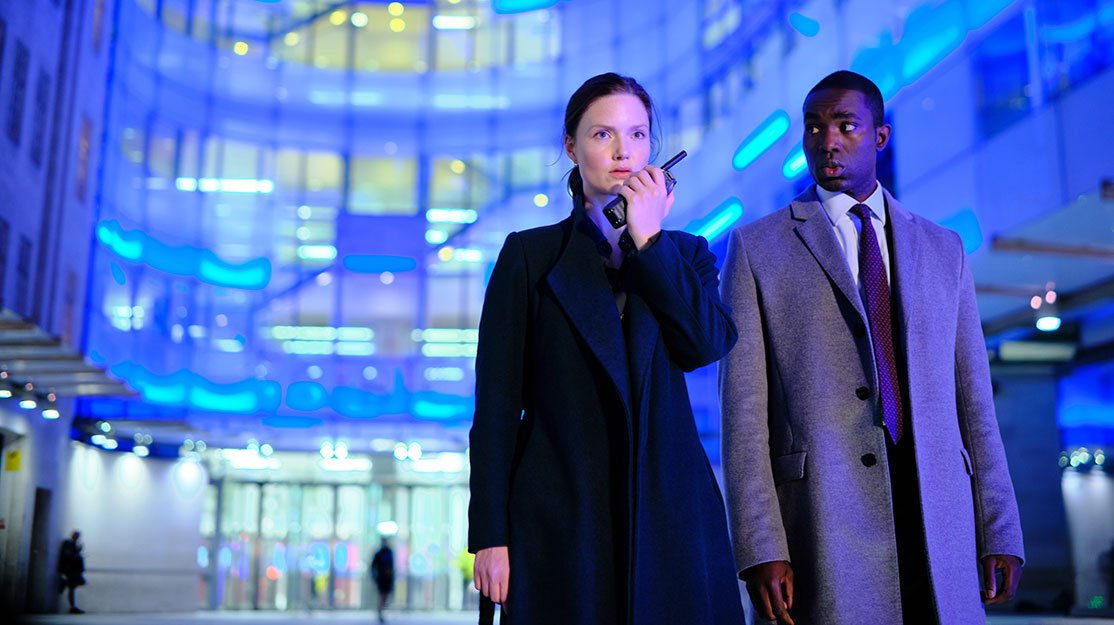 Ben Chanan, creator and writer of BBC surveillance thriller The Capture, discusses bringing back the series for a second season, becoming a showrunner and keeping ahead of the headlines.

Less than four weeks after Russia invaded Ukraine in February this year, a video purporting to be a message of surrender from Ukraine president Volodymyr Zelensky surfaced online. Very quickly, however, experts were able to debunk it as a ‘deepfake’ – a video that shows a person or object doing or saying something they never actually did or said.

For Ben Chanan, the creator and writer of BBC thriller The Capture, it was a sign that he needed to get the show’s second season – complete with a deepfake scenario of its own – finished and on the air as soon as possible if he wanted to stay ahead of the headlines.

“It takes so long to make a show. We’re constantly looking at the news and me and my team of producers are constantly texting each other articles,” he tells DQ. “[The Zelensky video] wasn’t very convincing; people quickly thought it was fake. But you can imagine a scenario where it was much more sophisticated and someone made sure Zelensky was not able to get online at the same time and prove it wasn’t him. When that happened, we needed to get The Capture 2 out before it became a period piece.”

The Capture launched in 2019 with a story about soldier Shaun Emery (Callum Turner) fighting for his freedom after CCTV footage seemingly captures him assaulting and kidnapping a female barrister. After DI Rachel Carey (Holliday Grainger) is brought in to investigate the case, she discovers it is linked to the heart of the security services and the practice of ‘correction,’ where video is digitally altered to secure convictions, by a unit also known as Correction.

By the end of season one, Carey declares her intention to work for Correction. But her efforts to clear Emery mean that at the start of season two, which debuted last Sunday, she is largely ignored and sidelined by her superiors while still secretly trying to expose the sinister unit.

In the new six-episode run, it is following the death of a Chinese national seemingly at the hand of an invisible assassin that Carey crosses paths with Isaac Turner (Paapa Essiedu), the government’s security minister. After refusing to approve a deal with a Chinese tech firm for facial-recognition software, Turner is horrified to see a video of himself on BBC programme Newsnight appearing to greenlight the deal.

Carey then finds herself in the midst of another conspiracy – one she may struggle to solve if she can’t trust those closest to her.

Chanan admits that when he was writing season one, he didn’t have many notes on where a second season could take Carey or the themes it may explore. But digging deeper into the idea of being unable to trust what you see, the writer has once again found a new way to fascinate and horrify viewers in equal measure.

“Obviously, I wanted to bring Carey back and to answer the question of what she was thinking when she joined those guys [Correction] and what her intention is. We certainly do answer that in episode one,” he says. “That story continues as a dual narrative along with Isaac Turner’s narrative, and the two dovetail nicely very quickly.”

Chanan could have taken the story in numerous different directions. When he was writing season one, he jumped on an emerging term – fake news – that was widespread by the time the series aired.

Then when he came to consider season two, “the question of ‘can you trust what you see?’ only got more relevant, but I felt like it became a bigger question than just CCTV and the courts and justice system,” he says. “It felt like people began to question whether they could trust what they see on BBC News, on the most traditionally trusted news sources, and I thought, ‘This fits so well with the theme of The Capture.’ Going into media and politics just felt like the most obvious but most effective next step.”

Sidelined at the start of episode one, Carey sees a high-profile case involving a politician as a way to get closer to Correction, with an aim to gather more evidence against them and eventually expose their actions. “But it’s an incredibly tricky dance because while Carey can see 10 steps ahead, DSU Gemma Garland [Lia Williams] can see 11 steps ahead. Carey’s got a pretty dastardly adversary in the form of Garland,” says Chanan.

“As Garland puts it, correction is not fake news, it’s truth reenacted, which is the kind of slippery language she uses. The thing about most of the characters is they think they’re doing the right thing, even when they’re doing awful things. It’s not so much clear-cut goodies and baddies.”

While Carey and several of her police colleagues return, season two introduces a new figure central to the story in Turner. But while S1’s Emery was a soldier who became caught up in the world of government-backed intelligence operations, a member of that same government now finds himself caught up in the same programme.

“Very quickly, Isaac becomes schooled in what correction is and why it’s not just as simple as walking out and saying, ‘That wasn’t me. That was all fake.’ The government are very concerned that if he does that, he could compromise their involvement in correction,” Chanan explains. “In his heart and gut, he feels this can’t be right, and in [sharing] that instinct, Carey and Isaac [become] unlikely allies.”

Building on the relationship the pair established while making season one, Chanan sat down with Grainger (Strike) and laid out the whole story for season two before he wrote it. Essiedu (The Lazarus Project), who came on board once episode one had been written, was then approached after Chanan watched him in Michaela Coel’s I May Destroy You and spotted an actor on the up.

“His star was rapidly rising and I thought, ‘Wouldn’t it be a great coup to get him right now?’ Luckily, he really connected with the script. We had a meeting. He’s a very political guy; he was reading a book about deepfakes at the time and it really connected with his interests. From then on, I started to write the character for him just like I was writing Carey for Holliday,” Chanan says.

The three-year wait between seasons can be partly attributed to delays created by the pandemic, but there’s no escaping the fact that making The Capture is a complicated process.

After directing season one, Chanan this time handed over filming duties to James Kent (MotherFatherSon) and Philippa Langdale (A Discovery of Witches) and adopted a showrunner role, writing all six episodes and being available on set to deal with myriad questions from his heads of department.

“Then, of course, I’ve been across the editing. It’s been very different for me,” he says, “but luckily I had great directors. James did an incredible job in episode one embracing the tone of the show, getting the nuance of every scene, really good performances and really understanding all the many twists and turns, even within one scene. He really nailed it. Philippa did a really good job too.”

Before filming began, Chanan sat down with both directors and did page-turns for every episode. “Clearly it had to feel like there was some continuity there [with season one] but, at the same time, you don’t want to tell the same story twice,” he says. A big part of that shift is a new location, with season two set in the surrounds of Westminster and the BBC. “We’ve got a very different new lead character and so we’re looking at his home and the kinds of places he ends up. It’s really fun to see The Capture going to some exciting new additions to the landscape.”

With the show focusing, at least at the start, on the debate between privacy and facial-recognition software, as well as data-protection issues relating to a firm with links to a foreign government, many of the issues in The Capture were ripped straight from the headlines as Chanan was writing the scripts. He could only imagine how topical the idea of deepfake videos would later become.

A police advisor with a background in counter terrorism also checks the scripts to ensure the series is as factually accurate as possible, though the writer stresses that “it’s not a documentary” and, as such, there are moments of drama that push those boundaries.

“We pitch it just shy of sci-fi, but it’s not sci-fi. It is hopefully very dramatic and, yes, far-fetched – the wind would have to be blowing in the right direction for all this stuff to work at the same time, but we don’t put anything in there that couldn’t, in theory, happen,” he notes.

Scripts for five episodes had been delivered by the time principal photography started, with Chanan then writing a finale while overseeing on-set activity at the same time. It was a new experience for the executive producer, who had written all six scripts of season one before shooting started, which allowed him to then also direct.

Taking on the role of showrunner, Chanan jokes that he didn’t appreciate how quickly he would have to improve at multitasking, as he sought to tie up the story’s loose ends in the final script while answering questions about everything from costumes to props.

One of the biggest challenges of making the series, which is produced by Heyday Television and distributed by NBCUniversal Global Distribution, is producing all the footage shown on numerous screens in each episode, from CCTV images of busy traffic junctions to buttonhole camera footage recorded by Carey.

Mark Doman, a video artist who specialises in creating CCTV imagery, returned to The Capture S2 having performed a similar role on season one, only this time, “he’s even more involved because we’ve got to do things that aren’t CCTV, like interfaces and various different things,” Chanan says. “There’s a sequence later on where we see correction in action – something called ‘de-correction,’ which you’ll find out about. Mark’s been leading the design on that. He’s a great co-conspirator.”

The writer says he is now desperate to pen a 17th century period drama, if only to give himself a break from dealing with stories about modern technology. “It would be such a blessed relief,” he adds, “but that’s the challenge. The story in The Capture is often told on screens and you’re very rarely filming a complete scene. Often, you’re filming something that will be shown on one screen to another character and they’re responding, and that jigsaw puzzle is for sure the hardest thing in the show.”