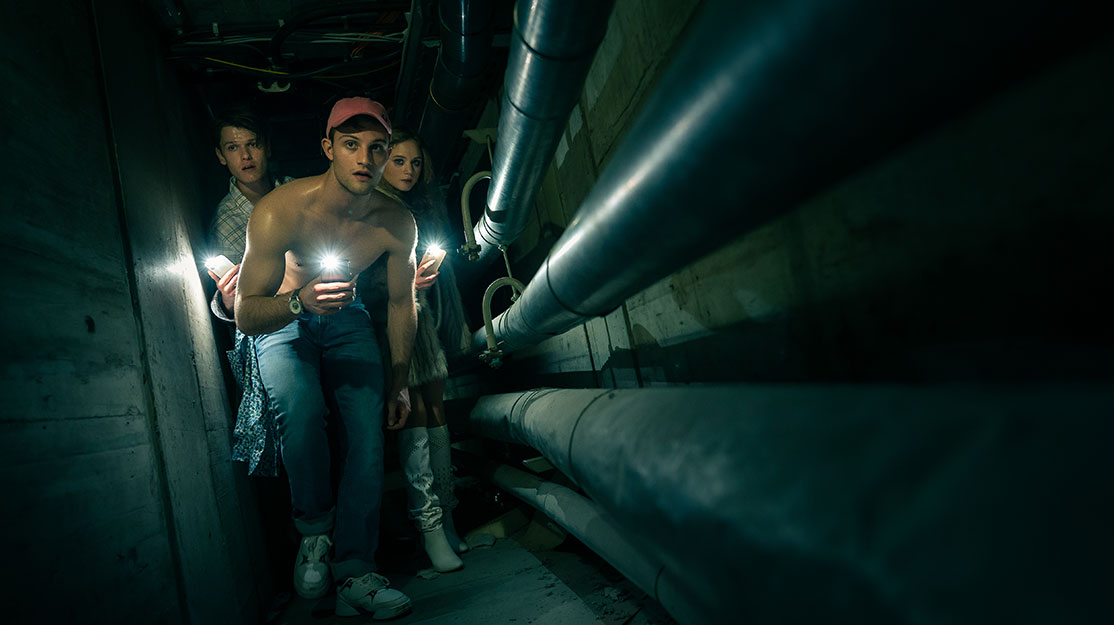 Jakob M Erwa and Florian Kamhuber, creators of German drama Katakomben (Echos), take DQ inside the making of this coming-of-age series that tackles themes of class, wealth and privilege beneath the streets of Munich.

Beneath Müchen Hauptbahnhof, the central railway station in Munich, lies a maze of tunnels and corridors that serve as the stage for six-part German drama Katakomben. It’s here that an illegal rave takes place, drawing hundreds of people including privileged 20-somethings Max, Nellie and Janosch into the dimly lit stairwells and walkways lined with cabling and pipes.

When a fire suddenly breaks up the party, dozens are left injured in the ensuing panic and three people are subsequently declared missing. The next day, the body of Max’s girlfriend is discovered on a river bank, while he still hasn’t been found.

As Nellie (Lilly Charlotte Dreesen) and Janosch (Yasin Boynuince) start their own investigation into Max (Nick Romeo Reimann)’s disappearance, they become embroiled in an invisible web that stretches from a real-estate tycoon to a police officer with a dark secret in her basement and the shadowy figures living in the catacombs, undisturbed by the authorities.

Known internationally as Echos, the series spins out the central mystery while also highlighting the financial disparities between sections of Munich society, putting the upper-class rich kids and their party lifestyles in stark contrast with the members of an underclass who survive in the darkness beneath the city.

The show was created by director Jakob M Erwa and producer Florian Kamhuber, who had previously developed other projects together before Kamhuber came across a newspaper article about the plight of people living in Munich’s catacombs.

“I’m from Munich and, if you know Munich, it has this perfect surface; there are a lot of rich people, everything is so fine and so good but, of course, the city is not perfect,” he tells DQ. “It’s ironic this is real. People who are addicted to drugs or who are homeless, they actually use this underground tunnel network just to exist.”

“It’s a safe space for them. That was the hook for me when I first heard about the catacombs beneath the city,” continues Erwa. “I thought it was interesting that a city that sees itself and presents itself as so rich also has its dark side. They say drugs are illegal so all those people get pushed away, and then comes this point where hedonistic, young rich posh kids want to party and find these catacombs. The question for us was how long can you push ‘invisible people’ further away until they hit back or something happens?”

Kamhuber presented the idea to Erwa in a three-line pitch at the start of 2018 and together they developed the concept, characters, plot and the social background to the series over a three-day spell in Berlin, where the director is based. Produced by Neuesuper, the series was then initially backed by NBCUniversal-owned network 13th Street, before the project was taken over by German streamer Joyn. Beta Film holds international distribution rights.

Erwa and Kamhuber were also head writers on the Echos, which allowed them to develop the series quickly. At first, however, they concentrated on the scripts with fellow writers Romina Ecker and Johanna Thalmann and avoided thinking too much about how much money it would cost or how certain scenes might be shot.

“Jakob was in Berlin and Johanna and Romina had a lot of other projects as well, so we pretty much did what everybody is doing now [during the coronavirus pandemic]. We were Skyping a lot and we were using Google Docs, so we were collaboratively writing the outline for the show,” Kamhuber says. “The complex thing about the story is it works like an onion. In the very first episode, you see something about the party and something about the people involved. But the more the story develops, the more you will learn about the party. We had to develop the whole whole story and then tell it backwards, in a way. It was really difficult so we had to readjust and correct a lot of things.

“Together, the four of us were plotting the episodes scene by scene and we wrote a treatment for everything that happens. Then Johanna and Romina wrote the first drafts, and Jakob and I were doing all the rewrites – I would say 20 rewrites for each episode. In the end, everybody was happy – or as happy as it gets.”

Once the show’s driving force – the central mystery – is established, however, the series turns its focus to its cast of characters, and Kamhuber says building those characters in detail often led to changes in the story.

Erwa adds: “We always asked ourselves, ‘Is this the strongest version of this person or could it be somehow stronger, even if it means a little more work?’ For example, I remember the work on Tyler [Mercedes Müller], one of the protagonists. She’s one of the ‘invisible’ people living underground. In the first two episodes, she was plotted as a male. And then I said, ‘OK, this is stupid, but let’s just think about it. What if Tyler was a girl?’ It was a lot of work [to rewrite] but it’s better. It feels like this also questions gender stereotypes and somehow breaks that up.”

After a day spent writing, Erwa and Kamhuber would use the evening to seek out locations to film the series, noting how important it was that the catacombs on screen looked like the real thing. But although urban explorers have delved beneath the city, they didn’t find it quite so easy to gain access to the subterranean labyrinth beneath Munich.

“The first time was really frustrating because you go there and all the doors are locked and it’s like, ‘OK, are they even real? Are they even there?’” Kamhuber says. “But once we were actually stuck [down there]. Somehow we managed to get in, but we didn’t manage to get out again for quite some time. It was really hard to convince people to allow us to shoot there because there was also construction work going on.”

The filmmakers ended up using the real construction at the station for part of the story, and eventually found tunnels in which they could shoot underneath the city’s Olympiastadion, which was built for the 1972 Olympic Games and was once home to Bayern Munich football club.

“It was really funny because when we tried to find the perfect location, we always looked for something very small so [viewers could] feel it,” Erwa says. “Julian Krubasik, the DOP, and I always said we wanted it to feel like it’s very tight and you almost can’t move. We found some places like this and they looked perfect, but then we thought, ‘OK, how will we manage to have 50-plus people in here [for filming]?’ We had people standing in a line for metres and metres, moving forward step by step.”

Filming on the show was interrupted by Covid-19, with just three weeks left to shoot when Bavaria went into lockdown. Plans had been put in place to continue work if key members of the cast or crew had to self-isolate, but the total shutdown meant there was nothing they could do.

“For Neuesuper as a company, it was really hard because you have deals with more than 100 people and, of course, you have to pay them so we were working on scenarios for how and when we could restart the shoot,” says Kamhuber, who had hoped to finish production last autumn when the weather would best match the wintry scenes filmed earlier in the year.

“But we decided to do it in summer, which was perfect because the infection rate was down and we had an amazing special effects unit who just put snow in every picture. Now the winter in the show is actually so much more realistic and looks so much colder than the actual winter where we are shooting, because we had almost no snow last winter, so that was great.”

The cameras weren’t able to return to Hauptbahnhof to finish filming, so the crew found a similar location in Salzburg, Austria, a five-hour drive away. Meanwhile, the show’s high-tempo style required a higher-than-average amount of filming every day in order to capture the numerous different characters and locations.

“One of the first things we said to the team was they have to know this is much more than you usually shoot for 45 minutes [per episode] but we want to do it like this,” Erwa recalls. “Every day was like, ‘Oh my God, how can we do it?’ Sometimes you just struggle and you feel like it doesn’t work, and sometimes you have to find new solutions, but what we have now is quite big, quite fast and still very intense.”

The director also worked with Krubasik to define the two different worlds within the series, preferring to shift colour palettes and use light to differentiate between the rich and poor over using different camera styles or perspectives.

“We said the rich world has to have much more light – golden light, daylight – and the world below has to have more green and bluish light and a lot of darkness,” he continues. “We made colour charts for every one of the main characters and the important supporting roles so we knew what textures and colours should be with each character.”

Ahead of its launch on Joyn this Thursday, Katakomben was given a virtual premiere last week as part of the Berlinale Market Screenings programme during the Berlin International Film Festival. Erwa promises an intense, scary, thrilling series featuring characters facing up to life and death and the pressures that come with family life. Each episode also flashes back to events during the illegal rave to reveal more about the circumstances that led to Max’s disappearance.

“I remember when we filmed this, everyone was partying,” Erwa says. “It was just before the first lockdown and, afterwards, we were like, ‘Oh my God, we’re so grateful we could shoot it before lockdown.’ Afterwards, we would have never done it because there are just too many people in this club. So everyone who misses clubs should see the show.”

Kamhuber adds that although social issues are at the heart of the story, Katakomben is never moralising. “It really is a fun show with compelling characters and a story that completely draws you into its very own special world,” he says. “We show everyday Munich, but we take a different approach.”