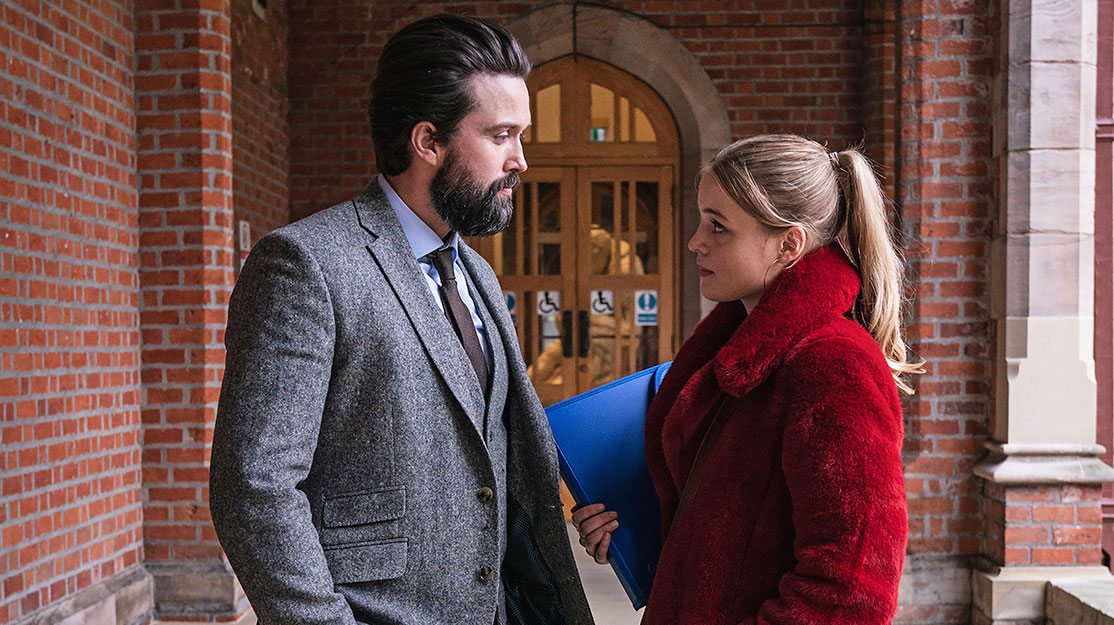 Chloë Thomas, the director of psychological thriller The Deceived, tells DQ about filming the four-part drama, channelling Alfred Hitchcock and burning down the set.

While many dramas would spend more time focusing on the blossoming but illicit relationship between an English student and her charming-but-married lecturer, four-part miniseries The Deceived is barely out of first gear before its central characters have finished flirting and started a full-blown love affair.

Viewers shouldn’t feel deceived, however, as the psychological drama – which aired last week on Channel 5 in the UK and Virgin Media Television in Ireland – quickly reveals its true intentions. When Dr Michael Callaghan (Emmett J Scanlan) suddenly disappears, the now-pregnant Ophelia (Emily Reid) tracks him down to his marital home. But a sudden death leads her to become trapped in a haunting world where she can no longer trust her own mind.

Set between Cambridge and Northern Ireland, the series comes from husband-and-wife writing team Lisa McGee (Derry Girls) and Tobias Beer, who wanted to create a contemporary yet otherworldly drama that takes inspiration from traditional Irish ghost stories and adds a layer of manipulation.

“When they sent me the first script, my first question was, ‘Can I read the next episode?’” director Chloë Thomas tells DQ. “I just wanted to know what would happen because I loved the line it takes between whether it is supernatural or is it not. I love that ambiguity in it and I love the crazy-intricate plotting.

“There was a real desire to get to Ireland because that’s where the main story begins,” she says of the fast-paced opening. “I like the fact you think it’s going to be about an affair, and we have had a few dramas like that recently, but suddenly he disappears and then she’s in Ireland and she’s pregnant. There were multiple rugs being pulled [out from under the audience].

“It is crazy fast and you have to go with it. But nothing is what you think it is. It puts you in the position of Ophelia, who’s fallen [in love] very hard and fast and then she rocks up in a place where everyone knows each other and it’s really foreign to her.”

Thomas came to the project inspired by movies such as Alfred Hitchcock’s Rebecca (1940), mystery thrillers Stoker (2013) and Personal Shopper (2016), and haunting Nicole Kidman drama The Others (2001).

“Me and the DP, Donna Wade, were thinking of Hitchcock and this sense of, ‘Is this real? What is going on?’ It’s not necessarily dark all the time. Modern gothic doesn’t have to be dark,” the director says. “Sometimes it’s quite bright, but it’s very uneasy. It’s on the edge of melodrama, which I really liked. Things were heightened but just about believable. You have to think you would go with Michael. You know it’s not a good idea, but sometimes people do things that are a bad idea, like having an affair with a married man.

“I was also thinking about modern ghosts. I’m not a horror genre nut, but I like things that are presented as totally real and you just have to go with it. In the look book, there were lots of creepy stairs and creepy doors, so locations are very important. I was interested in being still in the house and thinking, ‘What can I hear? Who’s that person?’ and us feeling the space, like you’re too small in a big room.”

An 18th century house on the outskirts of Belfast was used for the Callaghan home. It came complete with the desired wide corridors and large staircase. “It was just as I imagined it,” Thomas says. “We changed the outside of it in terms of the greenery. We took the leaves off [the trees], which made it 10 times spookier. The designer, David Craig ,understood those little things that added the spookiness to it.”

Establishing shots of Cambridge were also filmed around the English city to capture sights such as the Bridge of Sighs, though Queen’s University in Belfast doubled for Cambridge University on screen.

The Deceived marks Mescal’s second ever screen role, after making his debut earlier this year in acclaimed BBC3 series Normal People, which is based on Sally Rooney’s bestselling novel. He joined the show two days after filming on Normal People wrapped.

“As soon as I saw his audition tape, I thought he was brilliant. I knew he had to do the part,” Thomas says. “He’s so good at being ‘normal’ but epic. He’s such a good actor. He was really attracted by the Irish story and Lisa and Toby. We were really lucky. He’s such a lovely and talented person. It was a great ensemble feeling and he fitted right in. But nobody knew how big Normal People would be.”

Thomas looks back on the final day of shooting as one of the most difficult, as it involved staging a devastating fire at the Callaghan house. “I couldn’t believe we got to do it,” she says. “It was unbelievable.” The stunt came at the end of a packed day of filming, which included shooting on the house set, some green-screen work, filming on another set and then returning to the house to capture it going up in flames.

“It was like being at Cape Canaveral and setting fire to a rocket,” she says. “We were outside under a gazebo. Donna was looking the most stressed I’ve seen her – she had three cameras in there. The amazing thing about filming in Northern Ireland is Game of Thrones has created a generation of amazing technicians and filmmakers. They’ve set fire to so much shit on Game of Thrones, so they just know how to do it so well. Then when the special effects guys put the fire out, I had the idea to get them in costume so we might get [footage of] someone that looks like a fireman. It sounds crazy, but it’s a bit of extra value from what they had to do anyway.

“For me it was weird because I couldn’t do anything. I literally just watched and it was like watching a rocket. There was nothing I could do. It was one shot. It was pretty amazing and it delivered real flames. To do that was amazing.”

“I would talk and they would say, ‘Tell me. Let’s be open. Let’s try stuff.’ Catherine Walker was amazing because there’s a sex scene that’s disturbing, because Michael is a coercive character. Something about it doesn’t feel right. We did all the normal protocols: most people were off the floor, monitors were restricted and we had a brilliant first AD [assistant director] who was understanding and sensitive. Emmett is amazing as well. I’m really interested in how you direct sex scenes, who’s pleasure it is and what you’re looking at. I’m actually hoping I get to do a lot more.”

Thomas wants viewers to follow Ophelia through the story, though that doesn’t mean they should trust her. “Ophelia is the heart of it and we should feel like we’re being gaslighted. Are there any good guys? What even is it that’s happened?” she says. “But really, it’s about Michael and his damaged personality, his narcissism and his need to be loved. I love the gaslighting and the psychological aspect, but there’s no plot breakdown, Agatha Christie style. You do find out what’s happening, but it’s complicated.”

Produced by New Pictures and distributed by All3Media International, The Deceived isn’t the only thing Thomas has on TV right now. Having previously worked on ITV’s royal series Victoria, the director also helmed three episodes of costume drama Harlots third run. The BBC recently acquired all three seasons and launched the show on BBC2 earlier this month.

She admits she was “daunted” to join a show full of “female titans” such as Samantha Morton and Lesley Manville, who both play brothel owners in 18th century London. But she says Harlots has a very different tone from other period dramas.

“They are always put in a box and actually they shouldn’t be. They’re about people with the same feelings and same jealousies,” she says. “They all end up sleeping with the wrong people. But Harlots is really interesting because no one sits around the corner stewing. If they’ve got a beef, they just storm up to them, bang on the door and say it to their face. I just love that. It’s really about money and power, and the power the women have is their sex and that’s what they sell. That’s how they manage to buy property.

“I loved the ambition of the show and what the creators and producers were trying to do with it. And it was actually very interesting working on a show with all female directors. I’d never worked on a show like that before, which is weird because it shouldn’t be a thing but it is.”