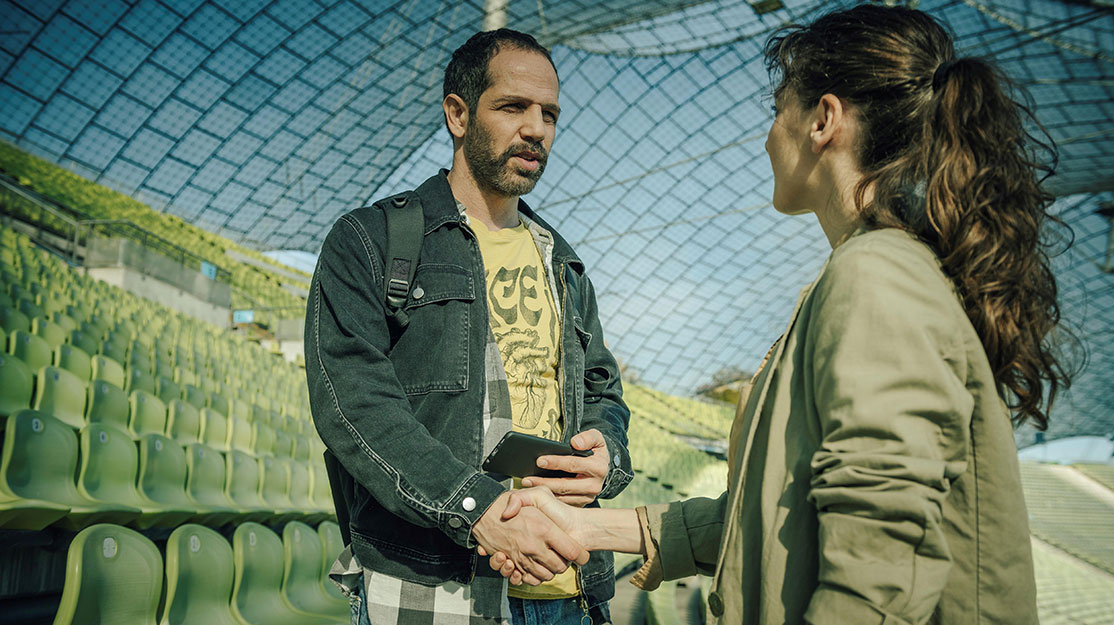 Munich Games writers Michal Aviram and Martin Behnke reveal how they overcame their long-distance relationship to partner on this political thriller, which focuses on a new threat upon the 50th anniversary of the 1972 Olympic Games massacre.

Fifty years ago, the 1972 Olympic Games in Munich were struck by tragedy when a hostage situation ended in the deaths of 11 members of the Israeli Olympic team.

Members of a Palestine militant group broke into the Olympic Village and held the athletes while demanding the release of 236 prisoners. But five hours later, six coaches and five athletes from the Israeli team, five of the eight hostage takers and a West German policeman were dead.

The massacre was previously the subject of a 2005 film from Steven Spielberg, called Munich, in which an Israeli Mossad agent attempts to track down those responsible.

The series opens on the eve of a ‘friendly’ football match between Israeli and German football clubs hosted in Munich to mark the anniversary of the attack. But tensions and nerves are running high – and the political stakes even higher – as the eyes of the world watch.

When Oren Simon (Yousef Sweid, Unorthodox), an Israeli Mossad agent stationed in Berlin, intercepts a message on a dark-web forum that suggests a fresh attack on the Israeli team is imminent, the German authorities are alerted. Maria Köhler (Seyneb Saleh, Dogs of Berlin), a German LKA officer with Lebanese roots and in-depth knowledge of Islamic extremism, is then ordered to work with Oren to ensure history doesn’t repeat itself.

Israeli writer Aviram (Fauda) partnered with German screenwriter Martin Behnke to bring the story to the screen, forming part of a multinational and multilingual team in front of and behind the camera. Produced by Amusement Park Film, CBS Studios and Sky Studios, the series is airing across Europe on Sky and on Hot in Israel. Paramount Content Global Distribution is handling further sales.

Aviram first had the idea for Munich Games several years ago, but it spent a long period languishing in a drawer. The initial pitch involved a deadly threat and a brittle partnership between an Israeli Mossad agent and a German police officer – one male, one female – as they pulled together to solve the puzzle.

It was only when she met Amusement Park producer Amelie von Kienlin (Cleverman) that her idea was dusted off and put into development. Von Kienlin brought in partners CBS and Sky and then introduced Aviram to Behnke.

“At some point, Philipp, our genius director, came along and then it was a very tight collaboration of Martin, Amelie, Philipp and me,” Aviram tells DQ. “Having said that, we had the pandemic, so it was very tight but very long distanced. We were all talking on WhatsApp. Martin and I first met for half an hour and then the next time we met, we had written all six episodes. It was a long-distance relationship.”

“It was almost like becoming pen pals, because we didn’t know each other but then we got to know each other through the writing process and through the work – it was a new kind of experience from other writing we have done,” Behnke says. “I was sceptical in the beginning how it would work out. I thought going to work in Israel would be a good thing to do, and this [show] was a good idea, but the fun part then didn’t happen because of Covid. Now we’re working on the second season and Covid is more manageable. It’s still long-distance work but we can meet every now and again.”

As viewers will see, the 1972 tragedy doesn’t explicitly feature in the series, save for grainy black-and-white footage that appears during the opening credits. Instead, Aviram wanted to use the memory and guilt surrounding the event that is still present for both Israelis and Germans as the basis for a new story.

“That specific event was unique and traumatic, but the point of Munich Games wasn’t about ’72. It was about how the past or our traumas keep shaping our present and future,” she explains. “The setting is very thrilling, it’s action, it’s all of that. But to me it was about how you deal with stuff you feel guilty about, how you deal with fears, how not to let fear or the past manage your life.

“Martin and I realised that, at some point, a lot of what we’re dealing with is prejudice: you have this set of beliefs and you let those beliefs inform what you think about the world and how you analyse what’s happening.”

Behnke takes that idea back further to the Second World War and the Holocaust, and how the relationship between Germans, Israelis and Palestinians is linked to the past. “Prejudice is connected to the past, and that leads to people making false judgements about each other and about situations, and that will or can lead to new catastrophes,” he says. “I thought it was really interesting looking at this situation and this relationship in the world today where prejudice is also governing social media, where we are fed stories that are more commentary than news.”

The story introduces Mossad agent Oren, a desk-bound analyst who stumbles upon a video in dark-web chat room that purportedly shows a computer game clip of an attack at the Munich football stadium where the match is set to take place. Oren then finds himself paired with Maria in a bid to track down the video’s origin and find out who might be leaking key security information.

“But he’s not a field agent, he’s not that person,” Aviram says of Oren. “That lack of knowledge and the set of skills he doesn’t have get him and Maria into trouble and everything gets really complicated. At the same time, we meet the owner of the Israeli soccer team and see he also carries a lot of secrets of his own.”

That Oren – who prefers analysing data to human interaction – and the straight-talking Maria lead the series is down to Aviram’s wish not to lead the show with “superhero cops,” but instead make the officers real and empathetic people.

“They’re not John McClane,” she says with a nod to Bruce Willis’ vest-wearing protagonist in the Die Hard feature films. “They are people doing their job – some do it better, some not so good, but they’re average people. The fact they are not going out guns blazing all the time makes us look at them as people, and we get to see their vulnerabilities, relationships and blind spots. It was very important to me and Martin to have humour and not be dead serious all the time.”

Behnke was on board with Aviram’s vision to make a grounded thriller, striving to keep it as naturalistic as possible while still thrilling and entertaining audiences.

“A lot of twists will come but they are all based on research into how the secret services work in Germany and Israel. We don’t pull them out of the air,” he says. “That becomes a big topic because there are a lot of differences in how the countries judge security against freedom. I always enjoy working on a show where I can learn something and am not only writing something I already know.”

The writers developed the whole series together and then wrote episodic treatments. One would then write a script, with feedback and notes provided by the other, all via the internet during the height of the pandemic.

“It was a very open, democratic writing process,” Aviram says. “When you find a good writing partner, when you trust someone and don’t feel you need to protect the written word and know everybody’s doing everything for the show, I felt very safe.”

Behnke found it advantageous to be part of a two-strong writing team, rather than within a bigger writers room. Producer von Kienlin also supported the writing process with her own notes and suggesting ideas for the series.

“After my experience with this show, I feel you should only take as many writers as you need,” Behnke says. “For us, any time of the day, any day of the week, we could message each other and say, ‘I have a question here on episode three.’ We didn’t have to invite the whole group. That really helped and I really enjoyed that.”

Behnke’s credits include Netflix’s hit German drama Dark, while Aviram is best known for writing on all four seasons of Israeli breakout action thriller Fauda. That series shaped the way she likes to write, in a space where ideas can be shared and discussed openly and honestly.

“It definitely showed me how things can be done,” she says. “You’re not afraid to make mistakes or argue. When you’re a writer, you have to be super open and intimate and share stuff. It has to be this way. Fauda taught me this way of working.”

“What I’m also proud of as a writer is that we never cut corners with the characters because we always thought of them as people,” she continues. “We have very elaborate back stories about them that will never make it to the screen, but the actors know and we know, and we know why they do what they do and how they do it. It’s an action-packed political thriller but we always stay concentrated on the characters and understand why they do what they do. Oren isn’t just running with a gun. He’s a complex human being.”

Munich Games’ human aspect is what Behnke is most proud of when rewatching the finished series. “I’m happy that it’s not over the top, it’s really connecting with human drama,” he says. “Even when I watch the episodes twice or three times, the dramatic scenes work for me because I connect with the characters. That’s a great effort from the directing, acting, producing and writing. It’s a very good teamwork.”

Though a second run has yet to be greenlit, work is already underway on a potential season two, with Aviram adamant she hasn’t finished telling this story just yet. “Over six episodes, you will see it isn’t a closed ending but there is an ending,” she says. “There doesn’t need to be a second season but, to me, there is still stuff I want to resolve and keep exploring. There’s more to deal with.”