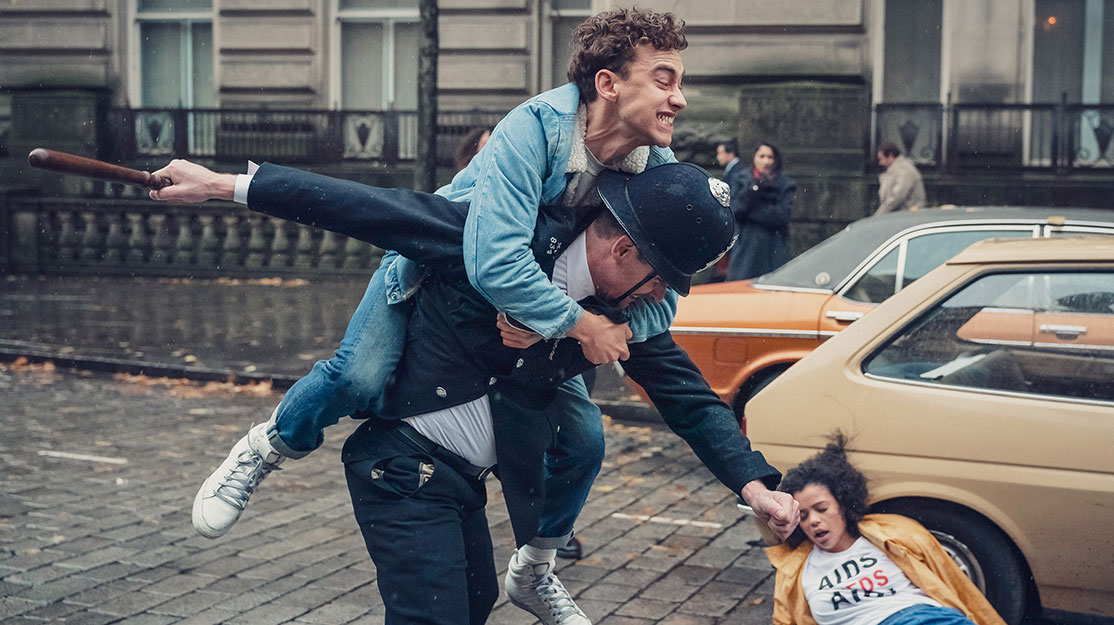 It’s a Sin creator and writer Russell T Davies and executive producer Nicola Shindler discuss making the five-part series, which charts the joys and heartbreaks of four friends during the 1980s.

When Queer as Folk debuted in 1999, it established a partnership between writer Russell T Davies and executive producer Nicola Shindler that has led to series such as Bob & Rose, The Second Coming, Cucumber, Casanova and Years & Years.

But their latest collaboration – their 10th series together – has been almost 30 years in the making, originating from Davies’ own experiences growing up in the 1980s.

It’s a Sin opens in 1981, the start of a new decade, as Ritchie, Roscoe and Colin begin a new life in London. Strangers at first, these young gay lads and their best friend Jill are quickly thrown together and soon share each other’s adventures. But with a new virus on the rise, they will be tested in new ways as they grow up in the shadow of AIDS but resolve to live and love more fiercely than ever.

Coming to Channel 4 in the UK and US streamer HBO Max in 2021, the series is produced by Red Production Company, distributed by All3Media International and has its world premiere today as part of Content London On Demand.

“Russell said to me a long time ago that he was thinking about this subject matter and thinking about writing about boys in London in the 80s,” Shindler recalls. “It was something that had been going around for a long time, and it was many years before he actually sat down and wrote it. But we talked about it and I knew the shape of it. When Russell said he was ready to write it, I was ready to make it because I knew it was going to be extraordinary.”

Davies picks up: “Really, I’m the same age as the lead characters in this. It starts in 1981 and the 18-year-old characters go to the big city and start living their lives. And I was 18 in 1981. So when you ask how long I have been thinking of it, it’s how long I’ve been living it, really, since I was 18. I was always going to write this and I’m delighted to finally get to make it.”

Former Doctor Who showrunner Davies, who relaunched the sci-fi series in 2005, says It’s a Sin is about friendship and life being lived, set against the rise of AIDS during the 80s. The writer worked with AIDS and HIV organisations during his research for the series and says they were all keen to portray how real life played out during that period.

“We see 10 years pass – it’s five episodes from 1981 to 1991 – during which time the shadow of this virus gets closer and closer until it’s no longer a shadow, it’s part of their lives,” Davies explains. “But what you see, as well as great sadness, terror and prejudice sometimes, is also life being lived, the joy of being that age, the triumph of the human spirit, the will to survive, the laughter you have with your friends and the great times you have when you go through those great highs and terrible lows together. It’s a story of a bunch of friends, and I hope people come to love it for that.

“A terrible disease came along and terrible things happened. But we didn’t all sit around crying night and day. There’s the will to survive and the will to fight the virus as well. There’s also the very slow awareness of the virus coming. This was the pre-internet age. One of my favourite things in this drama is that people go back to Scotland and disappear. You forget in the old days how you had to have someone’s landline telephone number. That was the only means of communication – that or a letter. So it’s a very different world in which information, and information about a virus in this case, is spread very slowly, which allows the virus to march onwards.”

Having developed the series with Davies, Shindler jokes that everything happens inside “the magic of Russell’s head,” with no series outline to inform her what he is planning.

“But Russell knows what’s coming up and he’s so production-savvy that he knows what we need to know in advance, so even though you don’t have those documents, you know what to prepare for,” she says. “I get the scripts and I experience the story as Russell writes it. That’s brilliant, because then you’re waiting and waiting and you have the same experience as the audience when you read the script for the first time.

“Structure-wise as well, even though it’s not what modern television has become, you have to get to know these boys and understand what they’re living for in order to reach the emotional stage that you need to get to with them.”

Channel 4 backed the project from the beginning, with distributor All3Media International also coming on board early and then introducing the series to HBO Max, though Davies says he enjoyed “enormous freedom” in writing the drama.

“You get notes and that’s good – you should have notes,” he says. “Sometimes the notes could be odd, if HBO might not know what a ‘kitty’ was, as in, ‘Put money in the kitty.’ They’re like, ‘What’s that?’ But they’re fine, and good notes can push you. And from day one, once you’re all setting out to make the same programme with the same wish and the same ambition, it really is easy.”

It’s a Sin stands as the latest series in Davies’ career to explore the lives of gay men, which notably have taken place during different time periods, from Queer as Folk in the 1990s and Cucumber in the 2010s to political drama A Very English Scandal, based on real events in the 1960s and 70s.

“I’ll have to do gay men who are in the Stone Age or astronauts next, but I’m very proud of working with Red, having done Queer as Folk 21 years ago and Cucumber and now I’ve done It’s a Sin, which is about the urban lives of gay men, which is who I am and it’s a story I’m endlessly fascinated by,” he says. “I’m endlessly fascinated now by some great and some awful stories emerging of life in the [Covid-19] lockdown, and my focus is always on those gay men. I’m immensely proud and to Nicola I’m eternally grateful.”

Shindler, who is leaving Red to set up her own label at ITV Studios, reveals that although It’s a Sin isn’t a direct prequel to seminal drama Queer as Folk, which followed three gay men living in Manchester, she and Davies did discuss how both shows are set in the same world and explore how friends become family.

“In a way, they’re all AIDS dramas, actually,” Davies notes. “Queer as Folk, in 1999, is deliberately turning its back on that drama and saying, ‘We will not be defined by a virus.’ It’s a very AIDS-based piece of work. Cucumber is actually exploring a middle-aged reaction to being told sex kills you in the 80s. And now here we are in the 80s with It’s a Sin.”

But having lived with the story for so long, why has Davies only now decided to write it? “I did spend a lot of my life looking away from it because imagine being 18 in 1981 and you’re told that sex kills you,” he says. “We all spend our lives looking forward, planning what we’re going to do next. It’s very hard [to look back]. Obviously I’ve lost people who died. But every strange thing you see in this drama is true; I’ve had to invent nothing. In episode two, there’s a hospital medical questionnaire that asks people with the virus, ‘Have you had sex with an animal?’ That actually happened. I could have written 100 episodes.”

Filming took place last year in Manchester, where producer Phil Collinson and production designer Luana Hanson were tasked with recreating 1980s London using a mixture of sets and CGI, while Davies and director Peter Hoar collaborated on some of the classic songs that feature in series.

“We had the most fantastic young cast,” Shindler says. “When there are so many inexperienced people in very key scenes, it can go wrong and it can take a long time to get the right performances, but they were brilliant. They knew what they were doing. They knew their characters so well and they worked so well together. The chemistry between them is just fantastic and you can see it on screen, so that just propelled the shoot really quite easily in terms of what we were getting on camera.”

Though It’s a Sin gets “very dark” across the five episodes, Davies says the show is not about tragedy.

“These people know how much life matters and how important it is to have a good laugh,” he says. “Some of these people are escaping their families and building their own families out of their friends. That’s always my favourite story: invented families you build around you as an adult. My intention was to create people who, when some of them die, you miss them. I hope that people approach it with an open heart and love these people.”