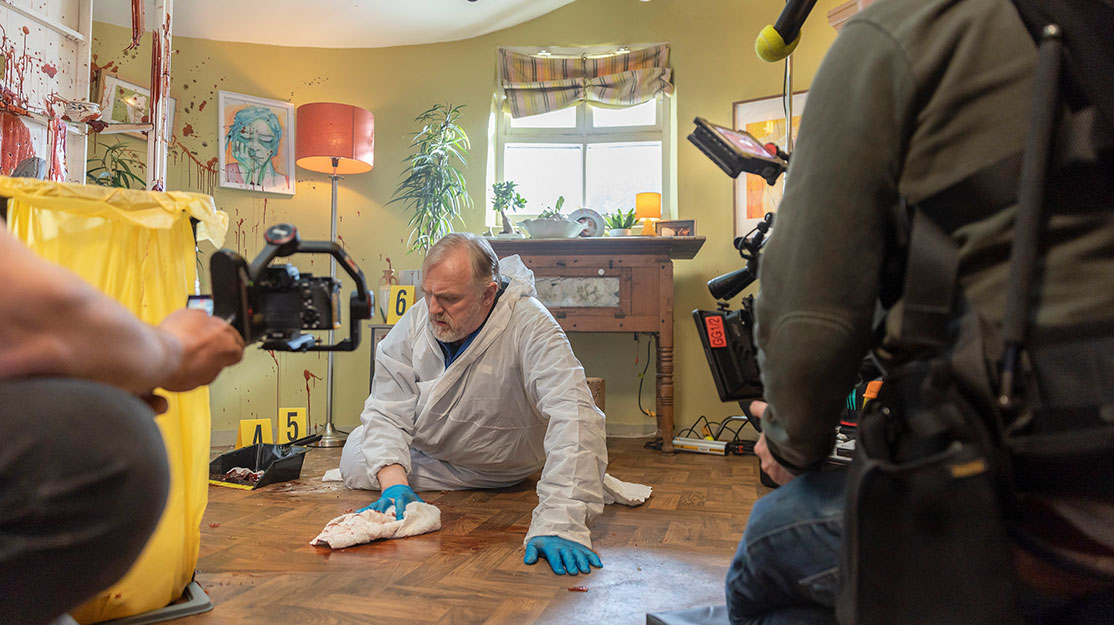 Davies cleans up his act

Greg Davies plans to add some polish to UK screens this week with the debut of his dark comedy series The Cleaner. He discusses how he adapted the show from a German series and why he’s excited by his lead role as a professional crime scene cleaner.

Written entirely by actor and comedian Davies, who is also known as the host of the original UK version of Taskmaster, the six-part dark comedy follows Wicky as he de-gores the home of a different person in each episode, getting to know the inhabitants in the process.

With titles such as The Widow, The Writer and The Aristocrat, the episodes unfold in a style akin to a chamber play, with the action rarely leaving the enclosed space in which Wicky finds himself cleaning up blood and other detritus. The style lends itself to a guest-star-of-the-week format, with big names including Helena Bonham Carter (Harry Potter) and David Mitchell (Peep Show) among those starring in individual episodes.

However, rather than the crimes that necessitate Wicky’s presence, The Cleaner focuses mainly on its characters. And despite Wicky’s “smart-ass” personality often rubbing his hosts up the wrong way, he has a knack for striking up a rapport with the people he meets, producing results that range from amusing to shocking and moving.

The project was brought to Davies by then BBC comedy boss Shane Allen, who has since left the pubcaster to set up his own production company. Tired of playing “middle-aged fathers,” Davies was intrigued by the original German show, which clocked up 31 episodes across seven seasons from 2011 to 2018.

This gave Davies plenty of stories to mine as he got to work on his version, which debuts on BBC1 tomorrow evening. The adaptation also benefits from being produced by the UK arm of Studio Hamburg, which was behind the first four seasons of Der Tatortreiniger.

“I was looking for something a little more unusual and [Allen] said, ‘I think I might have the thing for you – I’ve seen this strange German show and I think you’d like it.’ I just loved it immediately,” Davies recalls. “I couldn’t wait to have a go at it.”

While the foundations of Der Tatortreiniger remain intact, Davies made a number of changes, including adjusting the show’s comedy elements to better suit a UK audience. “The original is very droll and witty, and very subtle at times,” he says. “It was a lot easier for me as a comedian to take the story, the character and the brilliant premise and then, humour wise, start from scratch.

“Most of the written jokes come from my sense of humour being applied to that character, rather than trying to adapt a German sense of humour, which I think is difficult to categorise anyway.

“What I thought I would be doing was taking an English version of a German script and changing some jokes; what I actually did was sometimes take the story wholesale and then start from scratch with the dialogue.”

As for the storylines, some Der Tatortreiniger episodes were recreated faithfully, while others were extensively rewritten.

“I simply picked the episodes that I enjoyed the most, but I also perhaps steered away from some of the more challenging ones at this stage because I wanted to introduce Wicky more gently than I might have done,” Davies says.

“Some of them were easier to take the plot from than others. On four of them, we’ve borrowed quite heavily from the [original] plots, and I had the luxury of choosing from seven seasons of the German show. But with others, I felt the need [to make changes].”

Using episode five, The Influencer, as an example, he adds: “The original story of that one bears little relation to ours, because it was more about a reality star, a sort of Big Brother contestant, and naturally it was written several years ago, so it just felt like the social media thing was more relevant. So in terms of the plot, that became quite a big rewrite.”

“The stories are all self-contained and I’ve never worked like that, so it was good in that you’re just focused on doing a nice, rounded story and then you can put it away and do the next one,” he says, adding that “each one felt like an entirely separate adventure.”

Watching the series, it’s clear the guest stars enjoyed their brief stay in The Cleaner’s world. Bonham Carter is typically compelling as the murderous-yet-affable wife returning to the scene of the crime in The Widow, while Mitchell is at his neurotic and irritable best as a frustrated novelist in The Writer. Fans of Davies’ anarchic sitcom Man Down, meanwhile, will recognise Stephanie Cole as episode four’s eponymous Aristocrat, who is extremely proud of her family heirlooms.

As for Davies’ own performance, Wicky arguably represents more of a serious acting role than some of his previous parts, with The Cleaner’s humour subtler than many of the shows for which the star is known.

“It’s not a conscious move,” he says. “I haven’t sat down and thought, ‘Oh, enough of being silly.’ If anything, I would say my interpretation of this character is a lot more, for want of a more eloquent phrase, smart-ass than the German one.

“But I certainly welcome the dramatic elements to it. I find it exciting when in the more serious moments. It’s an interesting challenge. But I didn’t sit down and think, ‘I must become an actor; I must prove I’m an actor.’”

As well as making Wicky more of a “smart-ass,” Davies found other ways to make the character his own and differentiate him from Der Tatortreiniger’s Heiko ‘Schotty’ Schotte, who is played by Bjarne Mädel. “Schotty is football-obsessed and his social life revolves around football, and I change that to music just because it’s just easier for me as I am a lifelong music fan; I’m not a lifelong football fan,” he says.

In addition, Davies wanted to reveal more about The Cleaner’s central character than the original show did with Schotty. “Why is a man in his late 40s apparently single and without family and motivated only by this strange job? It’ll be fun to start answering some of those questions,” he says.

“So with the last episode, that’s quite different from the German one in that we do delve into him. It’s about an old relationship, and we delve into how that old relationship might have affected him and how it may have contributed to where he is in life.”

Perhaps surprisingly, Davies also took inspiration from classic children’s character Mr Benn: “For those of you old enough to remember, Mr Benn used to get dropped into a different adventure every week, and respond. And so, to some extent, Wicky has to be a simple enough person in order to almost be wandering into the situations he gets himself into in a childlike way.”

Having touched on his hopes to delve further into the character, it’s no surprise to hear Davies wants to extend Wicky’s story beyond the six episodes that begin on the BBC this week.

“I don’t want to tempt fate but I would love to continue with it, and Mizzi made it very clear she’d be happy for us to go off on our own trajectory,” he says. “We certainly would with Wicky – we’ve already hinted at a past that is specific to him, and I’m very keen to get stuck into him as a character while exposing him to increasingly challenging things.

“I’m very excited by him. I hope people will be excited to see where he’s going to end up each week.”