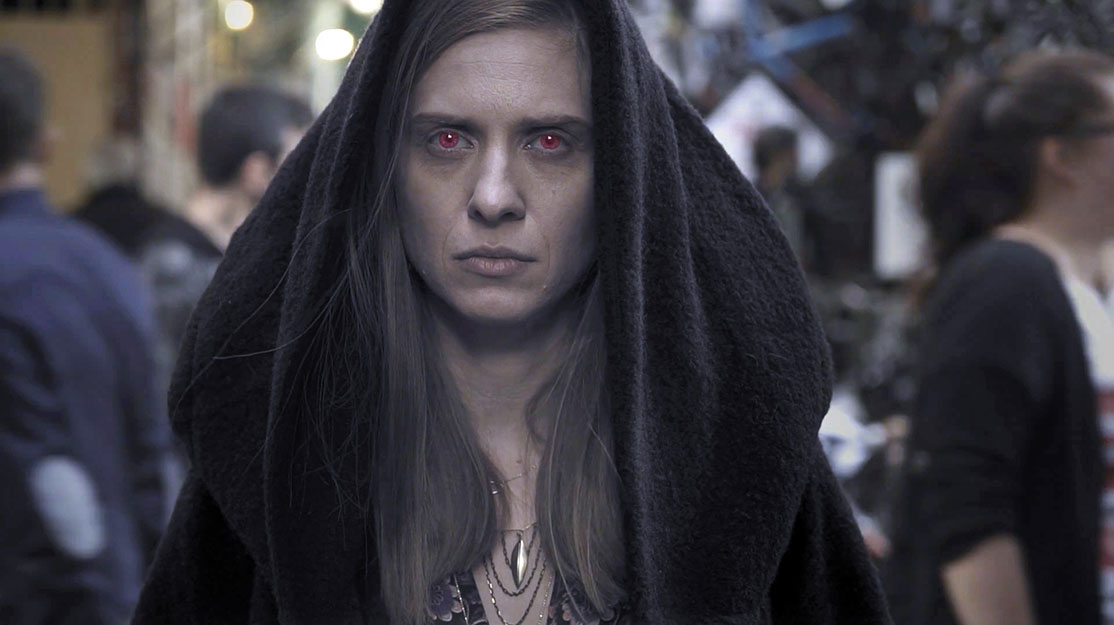 Antenna Group-owned web channel Netwix in Greece has returned to original drama production with Athens Dark, the country’s first ever vampire drama. Filmed with an emphasis on action and using the latest technology, the 8×10′ series was launched as a web exclusive, with all episodes uploaded simultaneously and available to watch for free.

The show, created by scriptwriter Zisis Roubos and directed and produced by Vasilis Antoniadis, brings to life a dark supernatural world, with references spanning from classic vampire literature to ancient Greek mythology.

The story follows Orfeas (Spyros Chatziaggelakis), a young journalist who thinks his life and career are at a dead end. However, things change when he gets commissioned to cover a goth music concert, where he witnesses a lethal battle between vampires and vampire hunters. He also meets Maximos (Antonis Taniskidis), an aggressive, ancient vampire who offers him eternal life and revenge on his best friend’s killers and his girlfriend’s kidnappers.

“A very magical thing we have in Greece is a huge folklore and history. It is no coincidence that the original vampire legend – not in its newer construction of a romantic lord, which was created mainly after 1800 – began in Ancient Greece, with various creatures and stories,” says Roubos. “So I changed these stories, these beliefs and myths to fit the audience. I did not keep any references or sources as they were. For example, in my own world of vampires, I present Hecate, the famous Ancient Greek chthonic goddess, as the mother of all the undead. But I took elements from other cultures too. I merged the old with the new, and the gothic aesthetic with the modern everyday Greek aesthetic, since what interested me was to create a script that makes the audience believe it takes place in today’s Athens.”

He continues: “I believe it is very important that the story you tell has characters with whom the viewer can identify. So, by placing this world in the Athens of today, I was very interested in telling the story of the characters, in focusing on the history of each of them and in ‘Hellenising’ the vampire genre as much as possible.”

Roubos admits he wrote some of the characters with the actors who eventually played them in mind. However, director/producer Antoniadis had a more strategic approach to casting Athens Dark.

“We took into consideration the young audience which we expected the series to have and we decided to introduce new talented actors who both myself and the scriptwriter appreciate professionally,” he says. “Because we are dealing with a new genre for the Greek audience, we wanted the cast to be able to convey the story as authentically as possible, so the fact that these actors are mostly fans of the genre themselves was also a catalyst in the selection.”

For Roubos, penning a series of short episodes specifically designed for the web was a huge challenge. “It’s a broken narrative, a preface to this dark world in eight 10-minute episodes in which I had to go through characters, history, narrative and action,” he explains. “This was very difficult, but it was also a very important experience for me, especially in the way I deal with the written word.”

Antoniadis adds: “This project had several peculiarities for many reasons. From the beginning, we looked at it as a feature film, to deliver a cinematic result at a very low cost and in a shooting period of only 16 days, under very difficult conditions and without many resources.”

The biggest challenge on a vampire drama is to make the viewer feel the supernatural characters they see in the series might actually be among them in reality, “let alone in Athens,” Antoniadis continues. The show’s creative team attempted to achieve this by blending visual effects with impressively choreographed battles and by filming at central locations in the city that would be recognisable to any Athenian.

“All the filming took place in Athens,” says the director. “We chose only natural spaces and we sought to escape the images we have seen before. Characteristic images in the series are the scenes we shot in an abandoned building in the Dromokaiteio Psychiatric Hospital and in an underground gallery in Kesariani, where the tomb of Hecate exists in our story.”

Antoniadis says the use of VFX was crucial: “We had to redo the same shots with and without special effects. It changed the way we created the frame so that in post-production we would have the opportunity to create a plausible result. This whole process was particularly difficult because, unlike in international films and series, in our country the infrastructure for special effects doesn’t exist. Nonetheless, the Athens Dark team in charge of make-up and special effects did a terrific job under the circumstances, and I hope that in a second season the possibilities and resources will be bigger to be able to make even more special things.”

Antoniadis acknowledges that, overall, opportunities to produce web series in Greece are still very limited. However, he adds that such shows’ online presence makes them more visible to young audiences, freeing producers from the stress of hitting viewing targets and setting them free creatively.

“This is a big de-stressing factor,” Roubos notes. “The game played with TV numbers is a bit unfair for some TV products, because it is determined not by the qualitative factors or production factors of the series itself, but clearly by what kind of audience will watch your product at its specific time of broadcast. So there are too many factors that play a role in whether a TV series will succeed.

“On the internet, on the other hand, there are no viewing charts. There is a product uploaded and it’s there for anyone who wants to click and watch it, whenever they want. And I am very happy that a large-scale fiction production for web streaming has happened  in Greece for the first time, because I hope this will be a start of endless similar projects in our country.”

Antoniadis, whose prodco Filmskin produces Athens Dark, adds: “I believe web viewing platforms are the future in Greece and internationally, and I am glad that I have the opportunity to contribute to their development. In the years to come, a large percentage of the market will be oriented in this direction.”

As for vampire dramas, he says: “In Greece, we are not used to seeing local productions of such series. [It’s a challenge to make this show a success] so that large organisations can invest in similar productions to begin to develop this genre even further here.”

While it might be too early for Netwix to comment on the potential commissioning of further episodes of Athens Dark, Roubos sees the first eight as an introduction to this vampire underworld and also envisions a book release. He would also like to see Athens Dark subtitled to reach foreign audiences, as he aims to create products that have the potential to be sold internationally.

“I am a huge fan of cliffhangers,” he jokes, as the ambitious Greek vampire saga begins its journey online.