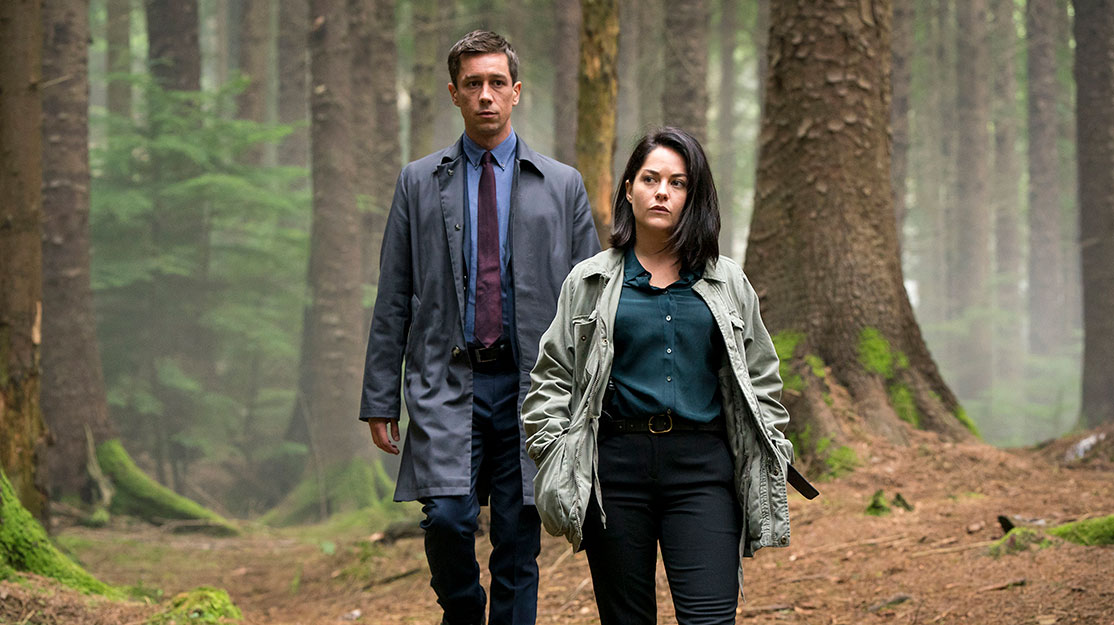 Sarah Phelps is a master of the literary adaptation. Best known for her TV reworkings of Agatha Christie novels, Phelps has so far brought four of the beloved author’s stories to the BBC – The ABC Murders, Ordeal by Innocence, And Then There Were None and The Witness for the Prosecution – with a fifth, The Pale Horse, to come.

The screenwriter, playwright and producer has also proved a dab hand at Dickens, having penned miniseries versions of Great Expectations and Oliver Twist as well as multiple episodes of Dickensian, again all for the BBC.

Set, as you might have guessed, in and around the Irish capital, Dublin Murders takes its lead from the first two novels in French’s six-part collection, In the Woods and The Likeness. Made for the BBC, Irish pubcaster RTÉ and US cablenet Starz, the show takes place in 2006, centring on detective partners Rob Reilly and Cassie Maddox, played by Killian Scott and Sarah Greene.

The series is produced by Euston Films, Veritas Entertainment Group and Element Pictures, with Fremantle distributing.

Rob and Cassie are tasked with investigating the murder of a teenager Katy Devlin, whose body is found on a makeshift altar in the middle of a woodland archaeological site – the same location where, 21 years earlier, three children went missing and only one came back alive.

It’s soon revealed, however, that Rob’s connection to the case isn’t merely professional and that the troubled detective’s deeply traumatic childhood makes this a very personal investigation.

As the eight-episode drama unfolds and the partners track a killer, Cassie, too, finds herself dealing with her past, and secrets relating to the dark, mysterious history of the woods and the unusual inhabitants of the neighbouring estate – including Katy’s family – come to the fore.

While adapting two books into a single story may sound like a daunting task, Phelps says it was a natural approach to take: “Tana herself said that she’d always thought of the books as being in pairs, and when I was reading them, I thought it would be a really great idea to sort of plait them together.”

With In the Woods focusing more on Rob and The Likeness more on Cassie, Phelps wanted the “consequences” of each story to “impact on [both characters] and really intensify their relationship within the investigation.”

And although the series is a mashup of both books, Phelps believes the story has stayed more faithful to the source material than some of her adaptations of single titles. “I think I’ve stuck to the plot, which may surprise people who know that I like to deviate from plots as much as possible,” she jokes. “Obviously there are deviations and obviously I change things, because one of the strengths of Tana’s writing is it’s such an immersive world.

“Her books are very ‘interior’ – you get to know every single, tiny little corner of each character, because you’re in their skin. You’re in their brain, in all the tiny little fissures of their mind with all the things they really don’t want you to know. In TV, you need to show, rather than tell, so that was one of the challenges. Taking the read experience to the watched experience is always a challenge – but if I didn’t like it, I wouldn’t do it.”

As well as adaptations, Phelps clearly has an affinity for detective stories, with Dublin Murders coming on the back of her multiple Christie works – most recently, The ABC Murders saw John Malkovich play her iconic investigator character Poirot. But what was it about French’s books that particularly appealed? “One of the things I found really exciting about them is that, within the genre of detective thrillers, they’re also modern reimaginings of really ancient tales,” she says.

“For example, In the Woods is a modern reimagining of the ancient tale of the children who go under the hill. When you peel it down to its roots… it’s infanticide – all these dark tales are invented to cover up some terrible crime.

“It was really exciting to think that this is a detective thriller, this is a murder mystery and this is also a really deep dive into the stories that we tell ourselves, that we’ve told ourselves forever. Why do we tell those stories? To keep away the beast in the dark as we huddle round the fire and hope we’re not going to die before tomorrow.”

The theme of darkness is something that crops up frequently as Phelps talks about the series. Discussing entering the woods as a metaphor for descending into madness, she says: “I really like the idea that there’s this place where you think it’s familiar – it’s where you pitch your tent, it’s where you go and smoke a joint, where you build a den – but actually there’s something else going on.

“I’m always really attracted to stories where we think we know everything. You’ve got electric light, a torch on your phone… but when the lights go out, what we think and what we believe is a very different story. We’re great when the lights are on; we’re rational, we’re brilliant. But you turn the lights off in a dark place – in the country – it’s really dark. And I guarantee, within a minute, you’ll be thinking all sorts of shit.”

The show opens with a flash-forward several months into the future, featuring a desolate Rob in a difficult conversation with Cassie, their relationship apparently broken beyond repair. This time shift is indicative of things to come, with Dublin Murders frequently swapping between 2006 and 1985 to reveal more about Rob’s past.

The production team took several steps to ensure viewers would immediately know what era they were seeing without it being literally spelled out on screen or awkwardly inserted into the dialogue.

Saul Dibb, who directs the first two episodes, explains: “We took the idea of two different types of film that were present in 2006 and 1985 and we tried to replicate them. One is a very common Fuji stock from 2006, which is a bit cleaner and greener, while the one from 1985 is a lot grainier.

“We tried to make it subtle as well – it wasn’t a massive change, but a lot of other incremental things in the costumes, the performances, the writing and the language. It needed to be clear without the thing of turning the dial to no colour or super colour,” adds Dibb, who also exec produces alongside Phelps, Euston Films MD Kate Harwood, Noemi Spanos, Ed Guiney, Alan Gasmer, Peter Jaysen, Elizabeth Kilgariff and Tommy Bulfin.

Phelps picks up: “The colours in the 1985 sequences always make you think of the photo of your holidays that you’ve forgotten and you find it down the back of a skirting board. There’s a shock to it – immediately, you can taste Angel Delight. It was really shocking when I first saw the rushes, like seeing something you’d forgotten you’d lost.”

Although filming largely took place in Northern Ireland capital Belfast, Dublin Murders is notable for having an almost entirely Irish cast and crew, which certainly helps achieve the authentically Irish feel its creators strived for.

“The writing feels very, very real, and what it’s showing is not a stereotypical view,” says Dibb. “Partly, the challenge was shooting in Belfast and then keeping the look consistent to Dublin, but certainly in 2006 Dublin was a very fast-moving city, and that’s what was captured in the writing.

“It was exciting to be able to say, ‘We’re going to root this story, which has these pretty extraordinary characters and situations, in a very real world, with characters that you can engage with.’”

Keen to avoid anything like “the disastrous episode when EastEnders went to Ireland, over which we should draw a thick veil,” Phelps notes: “I wanted Ireland as it’s seen through the eyes of people who absolutely know it.”

As such, she felt it important to avoid landmarks and to show a side to the country less familiar to those from elsewhere. “It’s like when you’re watching London and you see St Paul’s. For Christ’s sake, I know what I’m looking at – let’s see Peckham!

“There’s an unfamiliarity to it. You don’t really know where you are and you’ve got to trust the people who are telling you the story, your guides. You’re like Dante in the Inferno.”

Dublin Murders debuts on BBC1 tonight before hitting US screens on Starz on November 10. And while its impact on viewers is yet to be seen, Dublin Murders has already quite literally left its mark on Phelps, who reveals she has tattoos dedicated to the show. One is of a set of antlers, a recurring visual theme in the show, and the other is of a hawthorn leaf, whose back story is rather more complicated.

The writer describes watching an episode of BBC factual series Countryfile in which a man in rural Northern Ireland was protesting against plans to cut down a hawthorn tree as part of a motorway expansion. The man warned that, because of the tree’s magical properties, cutting it down would have dire consequences.

“This guy wouldn’t back off. He kept going and going – ‘You cannot do this. This hawthorn tree is a magic tree. There’s going to be chaos.’ You’d think that, at some point, he’d be carted off,” Phelps recalls.

But it turns out the man got his way, with the motorway ending up curving around the tree, because, as Phelps sees it: “At some really deep metaphysical level, every single person, from contracting to engineering and planning – high government level – at some point woke up at four o’clock in the morning and went, ‘What if he’s fucking right? What if he’s right about the hawthorn tree?’

“And I thought, ‘That’s the story [of Dublin Murders].’ We think we’re modern, we’ve got everything. But deep down, what if? What if?”