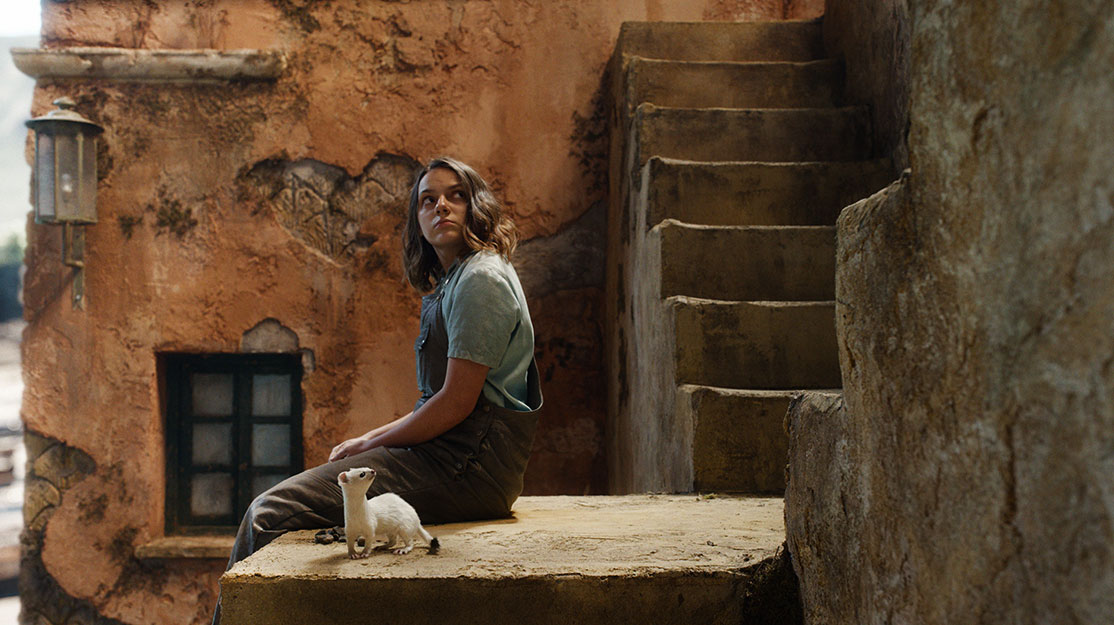 Executive producer Jane Tranter and writer Jack Thorne explain why the second season of Philip Pullman adaptation His Dark Materials has a different feel from the first and discuss the pitfalls of bringing the beloved book trilogy to the screen.

After the first season of His Dark Materials introduced viewers to a universe of dæmons, witches, talking polar bears and a mysterious substance known as ‘dust,’ fantasy fanatics will be pleased to hear executive producer Jane Tranter say they can expect “more of everything” in the second run.

Launching this Sunday on BBC1 in the UK and on November 16 on US coproduction partner HBO, the next part of the story draws on the second book in Philip Pullman’s His Dark Materials trilogy, The Subtle Knife, after the first was adapted from The Golden Compass.

At the centre of the story is Lyra, played by Dafne Keen. The first season followed Lyra on her journey from Oxford’s Jordan College to the frozen north to find her missing friend Roger and to make contact with Lord Asriel (James McAvoy), who has been conducting experiments deemed heretical by the all-powerful Magisterium. Meanwhile, Lyra is herself pursued by Mrs Coulter (Ruth Wilson), who has been working on rather more sinister experiments of her own.

Along the way, Lyra discovers Coulter and Asriel are actually her parents and learns how to use her alethiometer, a magical compass that reveals the answer to any question. She also uncovers the existence of multiple worlds and, following Roger’s death at the hands of Asriel, crosses into one of these in the dramatic season finale.

Meanwhile, as viewers learn that Lyra is at the centre of an ancient prophecy, the villainous Lord Boreal (Ariyon Bakare) crosses into a third world – the one most resembling our own – in search of a missing adventurer, whose son Will (Amir Wilson) inadvertently enters the same world as Lyra at the end of season one.


Also returning for season two are Hamilton creator Lin-Manuel Miranda as aeronaut Lee Scoresby, Ruta Gedmintas as witch Serafina Pekkala, Will Keen (star Dafne’s father) as Magisterium official Father MacPhail and The Wire star Clarke Peters as The Master of Jordan College, among many others.

Those joining the extensive cast list for the second run include Fleabag and Sherlock’s Andrew Scott, who plays Will’s father Colonel John Parry (aka Stanislaus Grumman); Simone Kirby as Dr Mary Malone; an astrophysicist and neuropsychologist investigating dark matter in Will’s world; and Jade Anouka as Ruta Skadi, another of the witches, who are more prominent in season two. Game of Thrones viewers, meanwhile, will recognise Bella Ramsey, who played the tiny but mighty Lyanna Mormont in the HBO epic, as Angelica.

“It seems like every one of the books grows as the trilogy progresses, and we do the same as the seasons progress,” says Tranter, co-founder of Bad Wolf, which produces with New Line Cinema. BBC Studios and Endeavor distribute the series. “In season one, we were on a journey with Lyra and Pan [Lyra’s dæmon], and in season two, we’re on a journey with Lyra, Pan and now Will as well. Critically, we’re in the new world of Cittàgazze.

“In season one we had a witch; in season two, we have witches, we have angels and we have spooky things going on. In season one, Lyra was going north in search of Roger, and was intrigued by dust. In season two, Lyra is going to other worlds to look for dust and is grieving for Roger. So everything is just kind of building and expanding.”

One area in which that expansion didn’t apply however, was the episode count – though not through design. Like the first run, season two was supposed to comprise eight episodes. But despite production on the second season beginning before season one had even hit screens, the show could not escape the impact of the Covid-19 pandemic, and an episode focusing heavily on James McAvoy’s Lord Asriel had to be scrapped.

“We did lose an episode,” says Tranter. “We shot with James McAvoy for about four hours and then we had to close down.”

Arriving on set fresh from treading the boards as the titular character in a West End version of Cyrano de Bergerac, McAvoy “was in his mud-splattered clothes, doing his full hot-knife-through-butter Lord Asriel stuff, bringing himself up to his big roar, and it was like, ‘OK, everyone out,’” Tranter continues.

“So that was interesting. It meant that, in post-production, we had to edit around a missing episode. It was standalone, but there were loads of answers within the body of that episode and loads of new questions posed, so that was a real brainteaser.”

Post-production was subsequently completed remotely. “We shot the season in 2019 in a what seems like another world now – we’ve all stepped through to a different one,” says Tranter. “The challenge of doing editorial in 2020 was made a lot easier by the fact we were already a very tightly knit team. From March 20 onwards, we were all staring at each other’s increasingly pale faces [via video conferencing], asking people day after day how they were feeling and if they were OK. After four weeks, we forgot about that and never bothered asking anyone again,” the exec producer jokes.

“But because we knew each other, it was possible to do it. It’s the most complex post-production thing, and to do it remotely, we were just really blessed by the strength of that team and the fact we’d worked together before.”

Jack Thorne, the writer tackling the daunting task of bringing Pullman’s much-loved books to the screen, agrees with Tranter’s view that the second run has a different feel.

“Season one had elements of a romp. It wasn’t; it was an adventure story, but there was constant change and Lyra was constantly meeting new people who challenged her in different ways. She was looking for different things each time,” he says. “Here, it’s much more about people looking into their souls and being investigated.”

Thorne identifies trust as the key theme of season two. “It’s about learning to trust each other and then to trust yourself,” he notes. “When we meet Lyra and Will [at the start of season two], Lyra has just been taught the worst lesson possible by her father – don’t trust anyone. This is someone who lied to her about who he was, and then later about what he was doing, and then committed an atrocity against her best friend.”

Trust is also central to Will’s arc, the writer continues. “He’s been looking after his mother and hasn’t had much support, so he’s never had much trust in his life. And now [he and Lyra] have got to learn to trust each other and themselves, as they’re about to discover their destiny.”

Along the same lines, Thorne says the notion of “adults letting down children” is just as important in season two as it was in season one. Cittàgazze provides the most literal example of this, the city’s children having been left to fend for themselves because of soul-eating beings called Spectres, which only target adults.

For Thorne, this issue is also timely. “That theme of adults letting down children and children having to find moral guidance between themselves is absolutely relevant now,” he says, pointing to the UK government’s recent controversial vote against providing funding for free school meals for children during school holidays, something the writer describes as “disgusting.”

There are also clear parallels to fake news, largely provided by the Magisterium, the church-like organisation that rules over Lyra’s world. In season two’s opening episode, the Magisterium is scrambling to suppress the fact Asriel has opened a window to another world, despite the gateway taking the somewhat conspicuous form of a dazzling beam of light atop a mountain, visible from miles around.

“The whole point of the Magisterium is that they want to suppress knowledge. They want to control information,” says Tranter. “They’re not ambitious or dynamic in terms of allowing people to do lots of research.

“When it does discover something new, which it does at the beginning of season two, they want to lie about the fact that that anomaly is there, even though it’s very plainly there to see.”

With credits including the This is England trilogy, The Last Panthers and, most recently, Netflix musical drama The Eddy, Bafta winner Thorne is one of the UK’s most celebrated writers. But rather than seek to bring his own style to His Dark Materials, Thorne says he has attempted to translate the books as faithfully as possible.

“I wanted to disappear; I didn’t want to be visible as a writer. I wanted to represent the soul of the books as well as I possibly could,” he said ahead of the launch of season one.

While having Pullman on board as an executive producer has undoubtedly helped, it’s fair to say the adaptation process has given Thorne more than a few headaches. “It’d be 3am and you’d go, ‘Oh yeah, that’s it,’ and you’d write a note in your notebook and annoy your wife. And then you’d wake up in the morning and go, ‘Oh no, I’m awful,’” he says.

“Philip has written the most incredible fiction. It’s so full of ideas that it’s constantly eluding you. But actually, that is a real gift as a screenwriter: as soon as you know where you are, you’re sort of in trouble, because you’re descending into tropes and descending into things that have been seen before.

“With Philip, you’re never allowed to. He’s always punching you in the face, basically – and I love being punched in the face by Philip.”

With work on a third season of His Dark Materials underway – although a renewal has yet to be confirmed – let’s hope Thorne isn’t left too badly bruised by the Pullman pummelling coming his way as he adapts the trilogy’s final book.