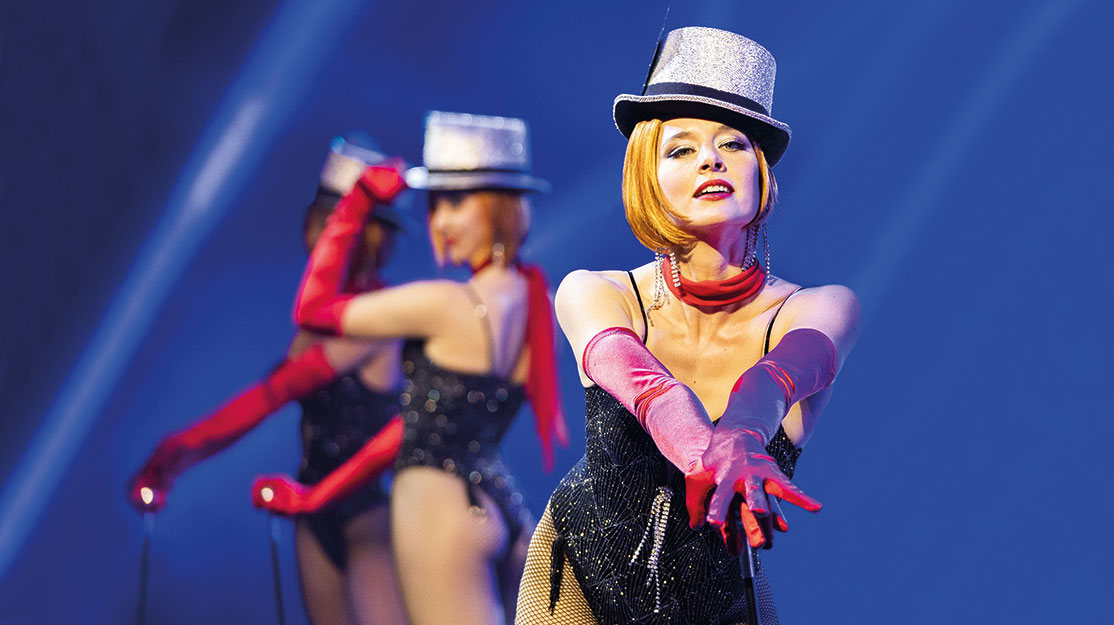 Svenja Jung tells DQ how she prepared to play a pair of twins in Der Palast (The Palace), a 1980s-set series in which two women from different sides of Cold War Germany discover they are sisters and swap places to try life on the other side of the Berlin Wall.

Berlin’s legendary Friedrichstadt-Palast has played host to a vast range of diverse performances across its 100-year history, from circuses and vaudeville theatre to ballet shows. And now, for the first time, the treasured theatre has become the setting for a TV drama.

Set in Berlin in 1988, Der Palast (The Palace) centres on twin sisters Chris and Marlene, who meet for the first time as adults. As celebrations are prepared to mark the 40th anniversary of the German Democratic Republic (GDR, East Germany), dancer Chris gets the chance to audition for her first solo in a special birthday show. But Chris’s world is rocked when her previously unknown twin sister Marlene, from West Germany, spots her on stage. After finding out that their mother raised Chris in the East while Marlene grew up with their father in the West, the sisters decide to trade places and discover what life might have been had their roles been reversed.

Taking centre stage in The Palace is Svenja Jung, who plays both Chris and Marlene. After Jung successfully auditioned for the parts in 2019, production was delayed by the Covid-19 pandemic, with the six-month shoot ultimately beginning in November 2020. Making the best of the situation, the actor used the hiatus to hone her performance of two characters who, although from different parts of Germany, might as well have come from different continents.

“They grew up in very different societies and systems,” Jung tells DQ. “It was fun to develop them. When I played Chris, I always danced a bit beforehand; and with Marlene, I hit a ball against a wall when I learned the dialogue. But at some point, I had a feeling they were just in my DNA and it would just happen when I put their costumes on.”

At the beginning, the only thing Jung knew about Chris and Marlene was that one was from the East and the other from the West. “That gave me a lot for my characters,” says the actor, who then worked with writer Rodica Doehnert (Hotel Adlon) and director Uli Edel (The Baader Meinhof Complex) to develop how they move, their place in the world and their political views. Debuting on ZDF Mediathek in December last year before its terrestrial debut on ZDF this January, the series is produced by Constantin Television and distributed by Global Screen.

“Chris is not very knowledgeable about all of that [politics]. She’s accepted her life in the GDR. What I think works really well is that even though Chris is the one who grew up in an imprisoned system and couldn’t leave, and Marlene had the whole world to go to, it is Chris who feels more free and is more open. Marlene is the one who is actually more imprisoned, particularly within her family. She doesn’t know who she is and she is looking for her identity, while Chris really knows who she is and where she comes from and is happy with her life, until Marlene comes along and she realises what she may be missing. I like this contrast we developed with the characters. Their personalities are the opposite of the systems they live in.”

Jung could call on her extensive dance background to play the role of Chris, an accomplished stage performer. The actor started ballet when she was six and competed until she was 16, and also danced modern and contemporary. She had also completed hip-hop dance film Fly prior to starting production on The Palace. “It was all very professional but I wouldn’t compare myself to any of the professional dancers we had at the Palast. I had to practice a lot,” she says.

“We danced with the real dancers from the Palast. They have a kick line with more than 30 dancers in one line, and they all look similar, which fits with the twin theme of the series. We had some dancing scenes with them and then another ensemble dance scene with 25 people. It was incredibly supportive, but if you’re there every day with these phenomenal dancers, you really have to keep up with them.

“When we finished rehearsals, me, Annabella [Zetsch, as Marina Weber] and Luise [Befort, as Chris’s young rival Bettina Wilke] stayed to practice a bit longer. But it was a relief to know the other dancers were with me. If there were any questions with choreography, they were very easy-going and helpful with all of that and showed us the steps 100 times.”

But while she might have been ready for those dance scenes as Chris, nothing could prepare her for scenes where she had to play Chris and Marlene in the same frame. “I was very curious to watch the series at the end because I didn’t see anything in between to see if it worked out, especially the scenes where I play both characters and they’re talking to each other,” she says. “When it was a close-up on me, I always had another actress or my little sister Chris there – it was amazing to have my little sister play one of my doubles.

“But when Chris and Marlene were both in the picture, I had to play with the air and there was no one reacting. I just had to think about how I would react and then give myself a bit of time before reacting as the other character, which was the most difficult thing I’ve ever done. It was so bizarre, standing there listening, waiting and then reacting and being emotional and screaming into the air, for example.”

Filming began in Poland, where scenes in Chris’s apartment were shot. And things soon became more complicated when Jung had to play Marlene pretending to be Chris. “Honestly, I had to switch all the time,” she says of the show’s demanding production schedule. “Sometimes I started with Chris, then Marlene and back to Chris in the end. I had to be ready with both parts all the time. It was great that I had so much time to prepare, because there wasn’t much time to do that on set. I had to be there, get changed and then go for it.

“It was very helpful that my sister always played Marlene’s double, so every time I was Chris, it was very clear who was in front of me. And every time I was Marlene, another actress played Chris. They helped me a lot, so I knew who I was playing and what was going on.”

Jung would also alter her voice depending on which sister she was playing, with Marlene’s voice slightly deeper while Chris’s voice was warmer and a little higher. “I also had to understand how they walk – and how they drink water,” she says. “Sometimes Uli was just like, ‘Well Svenja, stop. There’s too much Marlene right now and you’re Chris.’ It was good that he was always there.

From Poland, the production headed to Berlin to shoot inside the Friedrichstadt-Palast and then on to Munich to film Bamberg, where Marlene is from. “Every place has its energy, and you could really feel what was going on there,” Jung says of working in the Palast. “It’s such a historical place. You feel all the people who have been there. At the beginning, I was very scared of the stage because it is so huge. Then as soon as I got comfortable with it, it was very magical. I felt very playful in that building. I’m happy we had a chance to shoot there.”

With renovation and rehearsals taking place at the revered venue at the same time, shooting at the Palast was not straightforward. The production would film on location at night, leaving Jung to perform dance routines into the early hours. “Doing all these dancing scenes during the night and all the close-ups at 7am was tough,” she says. “I’m not a big fan of night shoots and it was three weeks in a row, plus Covid. The circumstances we did this series in were crazy. We were the biggest production in Germany at the time, with all these dancers and this crew and with all the stopping and starting. There was a will to finish the series. It’s like there was a higher power because everyone wanted to finish it and make it good in the time we produced it.”

Among a number of German series in recent years to look back on the Cold War, most notably the Deutschland franchise, The Palace certainly offers a fresh perspective on life at that time, looking at events through the eyes of two women who grew up on either side of the Berlin Wall and then swap places. “You get to know the West through Chris’s eyes and the East through Marlene’s eyes. The whole series is about reunion, between them and between West and East, and that we are the same,” Jung says. “Chris and Marlene are separated by a system but they are one family. I really like the vision of that.”

Pitched as an emotional, musical and suspense-filled family drama, the six-part series is also one of the first dramas to show East Germany “in a very colourful and playful light,” says the actor, adding: “It’s very glamorous. It’s something you haven’t seen before because normally the East is very grey and the West is colourful. Now we’ve turned it around.”

Discussing her personal highlights from the shoot, Jung points to a scene in which Chris dances solo with feathers. “It was one of the biggest challenges because it was just me on the huge stage, trying to fill it and perform there.”

But she most fondly remembers the scenes in which she had to play Marlene and Chris at
the same time, and particularly the chance she had to work with her sister. “I don’t know if that will ever happen again, because she’s not an actress,” she says. “To tell a story about sisters and having my own sister there while I was acting, that was very special.”

Don’t I know you from somewhere? Svenja Jung’s other roles

Beat
Jung plays Nani in this crime drama that revolves around Berlin’s celebrated club scene. The Prime Video series stars Jannis Niewöhner as the title character, a club promoter who lives a life of excess. When the bodies of two young girls are discovered in his club, he is recruited as an insider by the European Secret Service and discovers a web of corruption and organised crime not far from home. 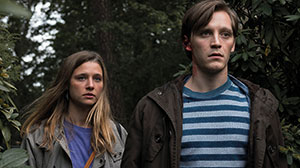 Deutschland 89
In the third chapter of this Cold War spy thriller, following Deutschland 83 and 86, the story picks up with East German secret service agent Martin Rauch (Jonas Nay) at the fall of the Berlin Wall. Jung plays Nicole Zangen, his son’s teacher, who becomes caught up in Martin’s bid to foil a terrorist plot.