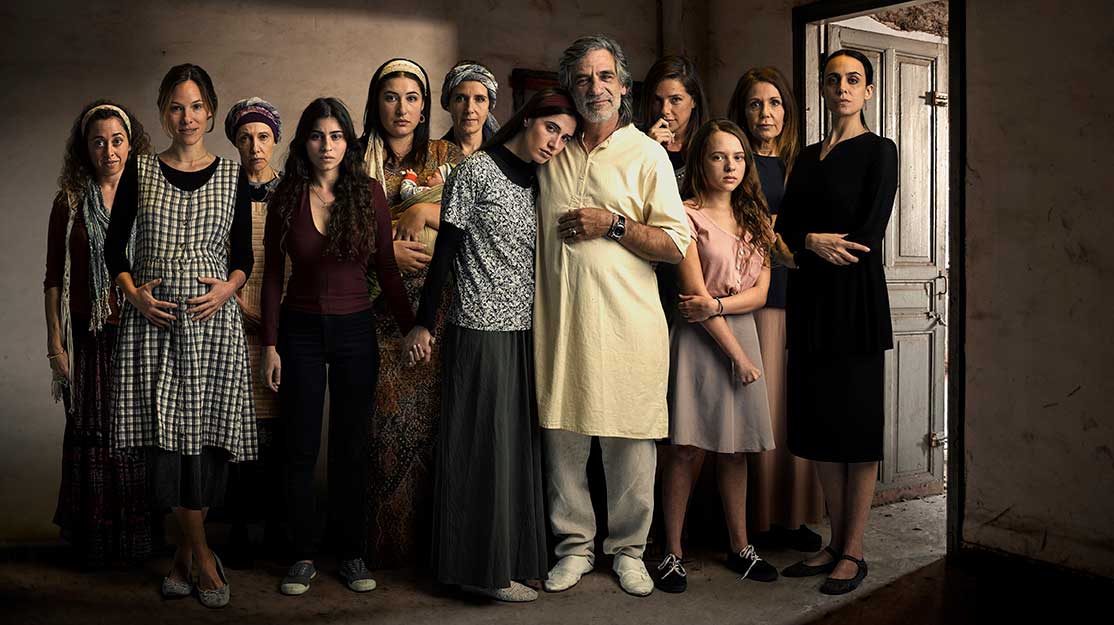 Drawing comparisons to The Handmaid’s Tale, Israeli drama Harem shocked viewers with its depiction of life for women and children living with a charismatic cult leader. DQ speaks to the writing team behind the Reshet show, which has been renewed for a second season.

There are many parallels to be drawn between Israeli series Harem and The Handmaid’s Tale, the US dystopian drama praised as much for its writing and cinematography as its prescient and often harrowing plotlines.

But while the Emmy- and Golden Globe-winning series based on Margaret Atwood’s novel paints a bleak picture set in an alternative or, more worryingly, not-too-distant future, Harem is very much set in present-day Israel, raising topical and emotional questions about the existence of cults and themes of family and belonging.

Produced by Endemol Shine Israel for local broadcaster Reshet 13, the show is inspired by real-life cults in the country and around the world. In this fictional story, a charismatic mystic healer lives in large house in Tel Aviv with 20 wives, who have borne him more than 40 children.

Created and written by Anat Barzilai, Hadar Galron and Gadi Taub, who directs with Marco Carmel, Harem focuses on a 17-year-old girl who is persuaded to join her sister by the side of cult leader Shabtai Zadik (played by Alon Aboutboul) – much to the distress of her parents, who are powerless to bring their children home.

The eight-part series debuted in February this year and was screened at Series Mania in Lille, where it was selected as part of the International Panorama. Endemol Shine International handles worldwide distribution, with a second season due to air in 2019.

Harem was initially conceived as a play by Barzilai and Galron, whose interest in cults accelerated after meeting Maayan Miriam Smadar, a cult survivor who wrote a book based on her experience. Friends for many years, the writers shared a background in comedy acting but had never penned a primetime drama before, prompting Endemol Shine Israel’s head of drama Gal Zaid to bring Taub on board as head writer.

Their development of the series began by taking the point of view of parents who lose their children to a cult and discover there is nothing they can do to stop it. “That was very strong for me,” Barzilai says. “A cult is always an interesting subject, but I thought the fight between two strong families – one is a normal family, one is the family of the cult – could be very interesting.”

Galron, who leaned on her religious background and her personal experiences with cults, says they particularly wanted to find out about the psychological factors involved in the appeal of such groups. “The thing with cults and religion as well is they want to offer you freedom, your salvation, but the price you pay is your freedom. It’s a catch-22.

“What we wanted to do was expose the mechanism of why women go into them. The reactions to the series that touched me were from women who had been in cults before. Women wrote to us saying that, via the series, they understood things they hadn’t understood in two or three years of treatment after being in a cult. So maybe we did manage to touch that mechanism.”

From the very beginning, authenticity was key to the development of Harem, from the real-life people who inspired the guru at the centre of the story to the way he would manipulate his ‘wives’ so that they would become dependent on his approval.

“A guru in the desert would seem far-fetched,” Galron continues. “The reason we chose this particular cult was that people identify with this because, on a smaller scale, you can find these things within families. You have battered wives, henpecked husbands, children who have been psychologically messed up by their parents – when people saw these things on screen, they could identify with them.”

Shabtai, the cult leader, is an incredibly complex character, played with a sinister edge by Aboutbol. “What the leader wants and what he’s got are not the same things,” Taub explains. “Like most cult leaders, he wants money, power, control. He’s a narcissist – only your reflection in other people’s eyes confirms your existence.

“It begins with you getting addicted to his ability to comfort you, but then he also does what abusers do – he is unpredictable. He makes you gradually more insecure and in need of his approval because when you do something, you don’t know if you get a prize or a punishment. You’re always dependent on a judgement you can’t foresee, calculate, emulate or fit your behaviour to.”

It was important, however, that Shabtai should be charismatic and charming, because the writers didn’t ever want the audience to dismiss the women living with him as “stupid.”

“Alon was so right for the part,” says Barzilai. “He says we ruined his life! Some people are angry at him. He lives in LA now and he says Israelis who saw the show shout at him in the street and talk to him as if he’s the character. What’s interesting is some women wrote to me on Facebook to say what made them afraid was their feeling they might have gone after him. They might have become followers, because he was so attractive to them.”

“It’s not just drama,” adds Galron. “This could happen to anyone. People beforehand thought women who went into cults must have something wrong with them or weren’t well educated. The series changed that.”

There were times when the writing team worried Harem might be too dark, after hearing from friends who said they couldn’t watch because scenes were too “horrible.” One story thread sees a cult member forced to transfer custody of her child to its non-cult member father.

“On the other hand, we also really wanted to show the element of the community,” Taub says. “There are scenes where they’re preparing sandwiches for 40 kids and when they do shopping. There’s something about this sorority, this tight-knit group of women who are mostly supportive of each other.”

Sharing directing duties meant Carmel shaped the visual style of the series while Taub worked closely with the actors on set. “When the person writing the screenplay directs the actors, you can tell them a lot about the underlying meanings of everything because you know every syllable in the screenplay,” Taub notes, adding that he spent lots of time in rehearsals so when they arrived on set, they were ready to shoot.

“Our budget was $200,000 per episode. The season’s budget was less than The Sopranos’ catering budget. I don’t know if that’s true, but it sounds good,” he jokes. “They did $5m per episode, we do $200,000. The system is completely different. You shoot by location and you have to shoot 11 minutes a day. So pre-production is key. In the way we arrange the budget, I said, ‘Let’s put more money into rehearsals so that we save time on set.’”

Taub describes writing a series with the villain at its centre as the most challenging aspect of his work on Harem. “It’s a strange thing because the centre of this solar system is not a sun, it’s a black hole,” he says. Meanwhile, the protagonist emerges as the younger sister who, coerced into joining the cult at the beginning, ends up battling against the “frightening ghoul” in charge.

“This is not Tony Soprano,” Taub adds. “Tony’s a protagonist with a complicated side but you love him, you identify with him. You do not identify with this cult leader. Hate is almost as strong a bond as empathy. You are waiting for this guy to be taken down. The most fun thing about this series is hating this guy.

“Then we made the women very empathetic because, in real cults, a lot of people are normal. If we portray them as uniquely vulnerable, creepy or stupid then the whole thing will not work. We wanted people to see that this is not a freak show, this can happen to you.”

Both Barzilai and Galron also appear on screen, with the former playing one of Shabtai’s numerous wives, Avishag.

“The first day when I came to rehearse on the set, that was the first real joyful moment I had,” admits Barzilai. “Suddenly, the world you’re writing about and talking about becomes physical and this experience was so strong.

“At my age, you don’t find a lot of roles. They’re mostly for young people. You get the mothers, those roles. But it’s a very interesting role because she has nowhere to go. She gave her soul to this man and now she has to find where her loyalty lies. She has a son and it’s very hard for her.”

Taub says the story “exploded” in Israel after hitting screens. “We were not expecting the storm,” he admits, noting that the Israeli parliament has since begun to bring legislation against cults, while charities that support cult survivors have seen budget increases after being flooded with previously unreported cases.

“The problem is, if they steal your money, rape you or abuse children then you get them,” Taub says. “If cultism itself becomes a crime, it’s very hard to tell a religious sect from a cult from a yoga class. So I really don’t think I would like to see stronger legislation against cults, but against crimes that cults do – that’s the thing. It’s very hard to enforce.”

Season two will see the episode count rise by 50%, from eight to 12 episodes, with a story Taub teases will be completely different and will focus more on daily life inside the commune.

“What people came to see and what we enjoyed writing the most was his psychological manipulation, because he’s really smart,” he says of the cult leader. “He’s like a sophisticated chess player. His only focus is on his own desire, and he never has doubts. There’s no super-ego there, none at all. He manages to ensnare and trap people around him.”

Galron adds: “If there is one thing I would like more of [in season two], it’s humour. We made 16 episodes into eight episodes in season one and a lot of the humour was eventually cut out. It’s something we’ve spoken about, because I believe humour is a way of not taking the away the weight of the drama but making it more watchable. I believe in entertaining and giving a punch to the stomach at the same time.”