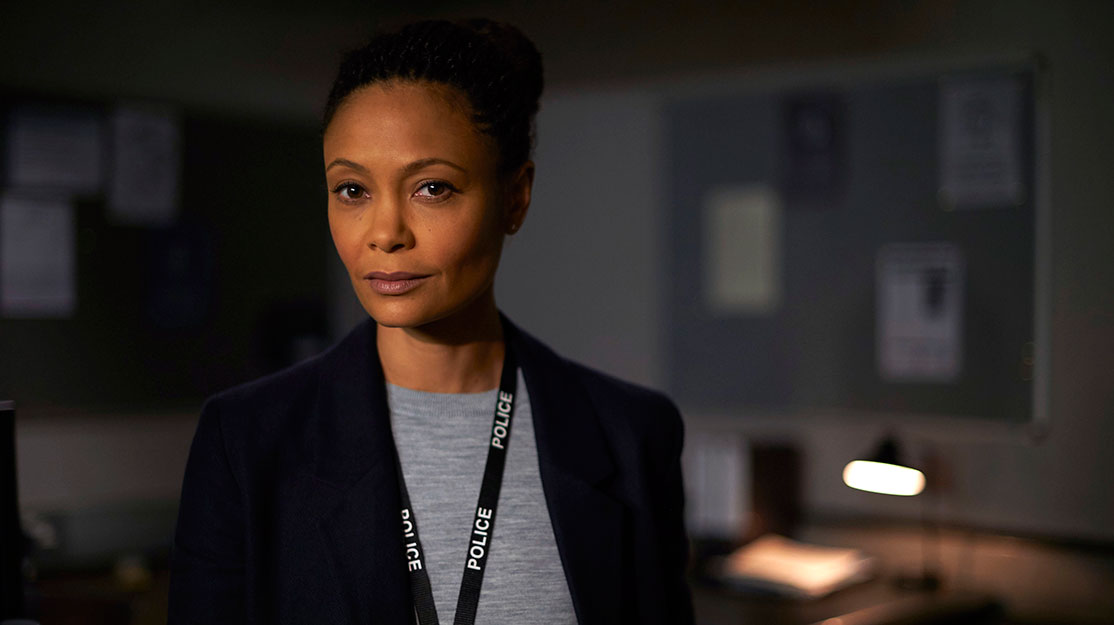 DQ hears from stars Thandie Newton and Vicky McClure and creator Jed Mercurio as Line of Duty returns for a fourth season.

Guest stars have a habit of getting a raw deal on BBC crime drama Line of Duty. Lennie James, Keeley Hawes and Daniel Mays have all suffered at the hands of creator and showrunner Jed Mercurio, whose series follows police officers under investigation by fictitious anti-corruption team AC-12.

That didn’t put off new cast member Thandie Newton (Westworld), however, who takes centre stage in the fourth season of the nail-biting series.

Newton (pictured above) plays DCI Roz Huntley, whose capture of a serial killer comes under AC-12 scrutiny when forensic co-ordinator Tim Ifield (Jason Watkins) believes there may have been a miscarriage of justice. A married mother-of-two, Huntley will do anything to stop her life unravelling.

Vicky McClure, Martin Compston and Adrian Dunbar return to play the trio at the heart of AC-12. Line of Duty is produced by Cait Collins and executive produced by Mercurio and Simon Heath for World Productions and Stephen Wright for BBC Northern Ireland. Content Media sells the show worldwide.

Newton admits she hadn’t seen Line of Duty before her agent suggested that if she wanted work in British television, “this is the best thing you could ever do.” And after binge-watching season three, she signed on with just a few hints from Mercurio about what might be in store for her character.

“I wanted to be a part of this,” she says. “I’d seen the third season and I had a sense from Jed of what it was going to be about. And also, I must say, I’d never seen Vicky McClure before and I thought she was completely spellbinding. Martin Compston is fantastic and Adrian Dunbar’s a national treasure. Jed just told me the facts, very simply, and that it would be great. I said, ‘Yes, OK, let’s go’ – and I’m so glad I did.”

More specifically, Newton points to the tight balance between real life and fiction that drew her into Mercurio’s world.

“What happens in life, you just can’t believe some of the shit that goes down, some of the crap that people get up to, and you couldn’t put that on television as fiction,” she continues. “You just couldn’t. It would be ridiculous. But Jed just manages to push it further than fiction, to a place where it really feels possible and that ‘possible’ is just nuts. But it’s still in the context of fiction.”

Newton recalls offering Mercurio some advice on how her character might have a low-key dress style with “tracksuit bottoms with high-tops – she’s a working mum. Jed was like, ‘No, that’s not what you’re going to look like. You’re going to wear suits and bad shoes.’ And I just got it. I realised we were going to try to do something terribly, horribly, diabolically real. The truth is Line of Duty just takes you into a place of realism.”

For his part, Mercurio describes hiring Newton as “one of the best casting processes we’ve ever had.” He continues: “We had an initial conversation with the casting director, Kate Rhodes-James, and her name came up. Immediately, it was, ‘Really? Do you think she’d be interested? Do you think she’d do it?’ And she was. Then we had a meeting, Thandie was lovely and so enthusiastic and really obviously not nuts, so great! It was honestly as simple as that.”

Episode one, which airs on BBC1 this Sunday, opens with DCI Huntley about to crack a long-running case as she edges closer to capturing a serial killer. But viewers soon discover that after coming back to work after a period raising her family, she’s under huge pressure to close the investigation, leading to a decision that could make or break her career.

“Every woman recognises the frustrations here that in every role, every job, every line of work, you have to be twice as good [as men] – and then if you’re black, you have to be twice as good on top of that. So this woman is under a hell of a lot of pressure,” Newton says. “And the audience sees the pressure she’s under, so it allows the viewer to be judge and jury, which I think is fantastic because it’s forcing them to have an opinion about this. There’s sexism, of course there is, but one of the things that’s wonderful about these characters – both Vicky’s and mine – is that we manage to ride those waves and still do a brilliant job.”

McClure, who plays detective sergeant Kate Fleming, says of her role: “Playing undercover every time, I always get found out – so I’ve started to get the idea I’m not very good at it! It makes for great drama, though, so that’s good. People ask whether my character has ever tried to use her womanly ways to stay undercover, but it’s never been that kind of show. There’s definitely moments with the promotion [at the end of season three] and how that may play out, and there’s that competition with Martin [who plays DS Steve Arnott], but also the characters really care about each other, they’re hugely supportive.

“It’s just real life. They both want to get on, they’re both fiercely ambitious. Kate does have a family, she’s not put it to one side, but she’s so passionate about her job and the good it brings to the people and the police that she’s not the main carer for her child. I’ve spoken to Jed a lot about that over the series because it’s a big part in my head for my character. It’s not seen very much, but it means a lot to me to play it.”

Line of Duty has built a reputation for the layers of police process and procedure contained in each episode that other dramas would prefer to rush past. So it’s fitting that season four’s focus falls on the role of forensics in criminal investigations, in terms of both the show’s fondness for minute details and also what Mercurio perceives as changing interpretations of truth and facts in a post-Brexit and Donald Trump world.

“The scripts were written a couple of years ago and the phenomenon we’re seeing now is probably an extension of things that I think had been creeping in for a long time,” Mercurio says. “There is sometimes a lack of respect for facts and objective reality. A lot of what we’re saying in this is where is objective reality and how do you test it? And the criminal justice system is obviously a very good way of exploring that.

“One of the higher aims of this season is to look at this theme of what is truth, what is objective reality? I feel very fortunate that something that was important to me is becoming important to other people. Over the years I’ve been getting more and more exasperated at the lack of respect for facts, proper research and accuracy in people arriving at an opinion, and being unable to tell the difference between opinion and fact. So that’s just something that, unfortunately for the world, has become a bigger issue now than it was.”

On the subject of the amount of police procedure in Line of Duty, Mercurio says he has to find a balance between authenticity and pace, particularly during the trademark interrogation scenes, which can account for up to 20 minutes of an hour-long episode.

“We’re so accustomed to watching police series that don’t delve into that, and it gives Line of Duty its identity,” the showrunner says. “If you want a firearm, you have to go through a whole process to sign one out. If you want to present a piece of evidence, it has to be logged, identified and presented in the right way. You can’t just bang the table and say, ‘You did it! Confess!’ I kind of got more and more into that. Obviously I’m very grateful to our police advisors for that as well.”

McClure jokes that she calls the show “Lines of Duty” due to the amount of dialogue the actors must remember during those tense interview scenes.

Newton picks up: “I have a 14-page scene with big chunks of dialogue on every page. Then I’d have a 25-page scene. I felt very old, I thought my memory was failing! It’s so frustrating because you want to be so good. There’s some characters sitting around the table and they’re so fantastically natural and I just want to be as good as them. Then you fluff [your lines] and fuck it all up! Then you come back in like a prizefighter and you do it and get through it and you just feel like the dopest actor in the world! It’s the most challenging but the most rewarding, it really is.

“That one 14-page scene is half an hour, and you’re nervous. It’s anxiety-making but it just adds to the drama and the tension. Apparently Lennie James [who played DCI Gates in season one] was the one who wanted to do them all in one take. Bastard! I’ll call him about that!”

The silences are just as important as the dialogue, however, with pauses specifically scripted to allow the actors the chance to speak with their body language instead of their words.

Mercurio says: “In a drama like Line of Duty, that moment when a character pauses after saying something creates a gap for the audience to think, ‘Did they mean that, or did they mean something else?’ That’s something we work on and a lot of it is in the script. If I put in a gap where someone thinks about something before or after, that’s something I learned a few years ago about how you show a character lying. You give an indication to the actor and you allow them to perform the lie in the most truthful way possible.”

Filming in Belfast since season two, Line of Duty will undergo another move this season when it switches from BBC2 to BBC1, having become the former channel’s best performing drama series ever. With several serial storylines wrapped up at the end of season three, now is also the perfect time for new viewers to join the series.

A fifth season is already confirmed for 2018, and the only question is whether Newton will be back as well. With he actor remaining tight-lipped on potential spoilers, viewers will have to watch to discover her character’s fate.