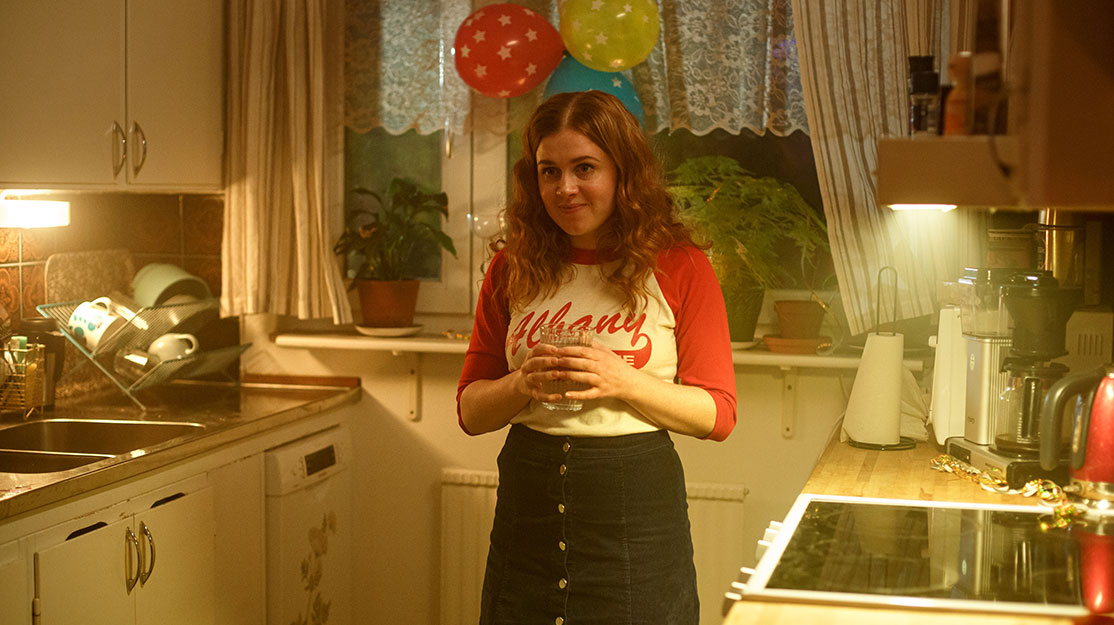 Singer-turned-actor Amy Deasismont speaks to DQ about writing, co-directing and starring in Swedish comedy drama Thunder in my Heart, the story of a group of friends navigating their 20s together.

Having risen to fame as a teenage pop star in the noughties, Amy Deasismont is used to the feelings of hope and joy that come with a new album release. But when it comes to launching the first television show she has created and written, the now 29-year-old Swede is experiencing a very different sense of anticipation.

“It’s kind of surreal,” says Deasismont, who also stars in and co-directs one episode of  Thunder in my Heart. “I’ve pitched this to so many people through the years, so it’s been a longer journey with this than making an album, which I’ve made it knowing it’s going to be produced and released. It was many years of developing this and not knowing if it was ever going to become reality. It’s surreal that it’s actually happened.”

An eight-part Swedish comedy drama, Thunder in my Heart follows a tight-knit group of friends as they enter their 20s together and face tests along the way from difficult families and challenging friendships. In a show filled with humour and sadness, Deasismont plays central character Sigge, with Julia Lyskova Juhlin as her best friend Antonia and Alexander Abdallah as potential love interest Sam.

For Deasismont, the project has been six years in the making since she crossed over from music into acting. Her breakout role came in 2015 feature Min Lilla Syster (My Skinny Sister), before appearances in TV series such as comedy drama Gösta and thriller De Utvalda.

“I’ve always liked acting and I’ve always loved film. I did some theatre when I was a kid but then my biggest passion when I was younger was music and singing,” she explains. “I was 22 when I filmed My Skinny Sister and, by then, I’d been working with music for 10 years. I just didn’t really feel the same kind of passion towards music at that time, and I’d had this feeling a few years before that I wanted to act. I started going to lots of castings and then, after I’d done that film, I was like, ‘This is all I want to do.’ What I felt for music in the beginning was how I feel now.”

With an English father and Swedish mother, Deasismont grew up watching British and American series. Hit UK comedy Peep Show was a particular favourite because of how it blends the misery of life with the absurd consequences of the choices made by flatmates Mark and Jeremy, and Thunder in my Heart takes a similar path by interspersing the tough, dark reality of life with comedic moments.

“I like the awkwardness of the characters in Peep Show and how they try to sabotage each other’s lives all the time, but you love them anyway because you can relate to their crazy thoughts, even if you’d never say them out loud,” she says. “But they do because they don’t care.” Similarly, Sigge – short for Sigrid – is very impulsive and doesn’t really think about the consequences of her actions or words. Having just moved out of the family home, she has also been shaped by her experiences growing up with a controlling father.

“She doesn’t have a filter, especially when she’s with her friends or when she’s interacting with partners and stuff like that,” the actor continues. “She follows the feeling she has in the moment and then suffers the consequences afterwards. I really liked writing her because a lot of the things she says are things I would think, but maybe not say. She’s a character who is, in many ways, not that free because she has a lot of family trauma, but she just lets things happen and she says stupid things. I’m a bit more controlled than she is.”

Sigge looks up to best friend Antonia, who didn’t know her own dad and is jealous of Sigge’s seemingly perfect upbringing, unaware it may not have been as pleasant as she makes out. Meanwhile, Sam is struggling with his own traumas: his mother passed away when he was a teenager and his father suffers from depression.

“That’s one of the reasons why Sigge opens up to Sam about what’s really going on [in her life], because they connect over shared experiences of sorrow,” Deasismont explains. “The strongest part of their relationship is that they really understand each other, even if their situations have been different; they understand what it feels like to have extreme sadness within family.”

Deasismont admits the idea of playing Sigge had been in the back of her mind from the moment she started writing the series, buoyed by her acting experiences on My Skinny Sister. But when it came to penning the scripts, she didn’t write the character’s story with herself in mind.

“All the decisions I made with the script were for the stories. I wasn’t thinking like, ‘Oh, what scene would I like to act?’ It was more about what was best for the story,” she says. However, an experience on set led her to realise that she might have been better off imagining herself as Sigge during the writing process. One scene called for the character to put her head underwater in the bath, “but I can’t be underwater without holding my nose and I hadn’t even thought about it,” Deasismont says. “I almost choked to death. We had to change it and it was fine in the end, but that was a moment where I thought, ‘OK, maybe I should thought about the fact that I was going to do this.’”

Deasismont wrote journals when she was younger and once dreamed of writing a trilogy of novels akin to The Hunger Games. But writing for TV came naturally, as she found she enjoyed telling a story over several hours of screen time.

“I just really like that way of writing. All I knew was what I’d learnt from reading other people’s scripts, like how they were structured,” she says. “I’ve had a lot of people who could teach me stuff along the way, but I didn’t show anyone anything that I’d written until I had written for a year. I was keeping it to myself because I really wanted to feel grounded in what story I wanted to tell. I was worried that if I got other people’s opinions too quickly, it would maybe set me in a different direction. If I was going to have feedback, I wanted to know what was important to me in the story.”

The first drafts of the then-nine-part series varied wildly in length – some were 30 pages, others were 15 – as Deasismont wrote the story without adhering to a specific format. Thunder in my Heart then began to take shape when Deasismont shared her work with My Skinny Sister director Sanne Lenken and then began to hold meetings with numerous producers.

“It was a long road,” she says. “I’ve met many great people along the way, but sometimes it was like, ‘OK, we should work together,’ and then something happened so we didn’t. There were many moments of feeling like maybe it was going to happen and then it didn’t.”

After two years, she contacted Stockholm-based production company BR • F’s Patrick Andersson (Midsummer, Euphoria), who responded to her email within 15 minutes and set up a meeting with Deasismont and fellow producer Anna-Klara Carlsten (Spring Uje Spring), with the trio then working together to bring the project to the screen. The show will debut on streamer Viaplay across the Nordics and Baltics this Sunday.

Working together through pre-production, Deasismont and Hazelius shared a vision for the series that involved bringing viewers up close to the characters and making them relatable through their clothes and where they lived.

“These characters don’t have that much money. Sometimes stories are told about people who don’t have that much money but they live in these huge apartments and they have the latest clothes – it doesn’t really add up for me,” Deasismont says. “It was important to me that all of those things felt very relatable. It was more about wanting to be in that gang because they have lots of emotions and they have relationships and they really experience all sides of life. That’s more exciting than wanting to have something material that they have.”

That the series was finally made is testament to Deasismont’s resilience and persistence. She recalls how at times she thought she was “crazy” and “mad” to continue pitching the show in the face of so many knock-backs early in its development. Around the same time, she was also turned down from a writing school, which compounded the feeling that maybe she should try something else.

“But it’s kind of funny because, less than a year after that, we had had our meetings with Viaplay and they said that they wanted to make the show with us, so you never really know what’s going to happen,” she says. “I was thinking, what do you do with this script [when nobody wants it]? Do you throw it in the bin? I just saw myself deleting it from the computer. I also felt like, ‘I’m getting older, I’m not going to be able to play this part forever.’ That was probably one of the toughest parts.”

But the best part of the process was being in a position to influence major decisions on the show, and Deasismont hasn’t been put off from jumping into the creative process again in the future.

“I’ve learned that the only thing you can really do when making decisions is to follow what you feel,” she says. “But I’ve accepted that you can’t control everything all the time. I had amazing people around me and they’ve done such a fantastic job. Things never really have a smooth journey, but that’s the thrill of it.”

As for the title, Thunder in my Heart takes its name from the song by Leo Sayer, to whom Deasismont grew up listening with her parents. The song also appears in a scene towards the end of episode one, which Deasismont included in the script when it was first written five years ago and which survived numerous edits to make it on screen.

“It’s one of the best songs in the world,” she says. “He’s singing about someone he’s just met, but it’s the end of the world if he can’t have this person. The characters [in the series] experience emotions that are that big as well. I was a bit nervous when I played it to Patrick and Anna-Klara because I thought maybe they wouldn’t like it, but they loved it.

“Back then, the show had a different title – it really wasn’t a good title at all – and the first thing they said was we have to change the title. We’d all been listening to this song and it was Patrick who said maybe it should be called Thunder in my Heart. That’s how it came about.”

tagged in: Amy Deasismont, Thunder in my Heart, Viaplay