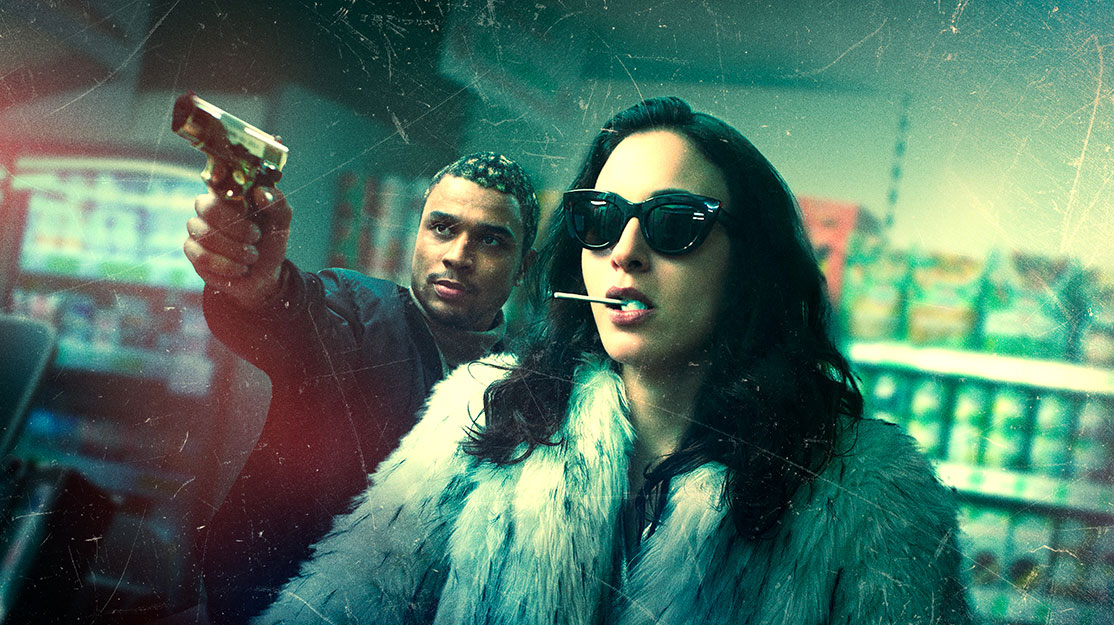 Ever since the real-life exploits of a couple who went on a crime spree across Depression-era America and an Oscar-winning dramatisation of their lives starring Warren Beatty and Faye Dunaway, the names Bonnie and Clyde have become synonymous with a certain brand of criminal duo: unwavering in their loyalty and commitment to each other and willing to risk it all for one another.

More recently, the term was used in the Dutch press in 2014 to describe a couple who went on a violent rampage and left a trail of attempted murder, theft, kidnapping and blackmail offences in their wake. Those events have now inspired a new four-part miniseries for streamer Videoland… titled Bonnie & Clyde.

In the series, with only a few months left in juvenile detention, Esra Kaplan (Dilan Yurdakul) decides not to return to custody after a dramatic leave visit to her Turkish family. Instead, she and her boyfriend Greg Driessen (Yannick Jozefzoon) go on the run. For the first time in their lives, Esra and Greg are free from everything and everyone, but with their crimes going from bad to worse, they become known as the ‘Bonnie and Clyde of the Low Countries.’ Will they escape and start over together – or will they eventually be overtaken by their past?

Here, Yurdakul, who is also a creative producer on the series, and fellow producer Gerd-Jan van Dalen tell DQ more about the show, which comes from the scripted label within Banijay Benelux and is distributed by Banijay Rights.

Dilan, what can you tell us about the story?
Yurdakul: Bonnie & Clyde tells the story of two outcasts, lovers Esra and Greg. It is loosely inspired by events from 2014, in which the ‘Bonnie and Clyde from the Low Countries,’ as the press renamed them, left a trail of destruction throughout the whole country. Bonnie & Clyde sheds light on the background story and underlying motives of two young lovers. The story shows two drifted youngsters seeking recognition and freedom. It’s a raw and intense love story. As long as they have each other, they feel seen and not in need of any recognition from society.
We follow their whole love story, from the very beginning, and cover all their ups and downs. Once the pair decide to run away together, the intensity of the situation leads their decision making – a drowning person will clutch a straw.
Esra is especially highlighted in this story. She is a young woman who, full of resentment and rebellion, wants to break free from all the deeply rooted patterns of her family. Haunted by her childhood trauma, she derails and flees into her love for Greg. But how much longer can she hold on?

Van Dalen: Their thoughtless actions were all aimed at achieving their own ends without regard for anyone else.

Why was this a story you both wanted to tell?
Yurdakul: It’s not often that a true event gives you the opportunity to tell the story from a new angle. With the background of this couple, we were able to do this.

Van Dalen: The story is so fascinating, interesting and recognisable in many ways. There is also so much to this story: it is dark but also a bit of Romeo & Juliet.

How was the series developed with Videoland?
Yurdakul: I pitched this to [Videoland owner] RTL and they were immediately very enthusiastic not just because of story, but also because it is from a creative who is really a part of the world [in which the story unfolds]. They gave a lot of freedom to me to tell the story I wanted.

Van Dalen: Dilan came to me with the plan and the interest of RTL and Videoland. Then we all went on together to find other writers and a director to further develop the story and put it in series form. It took us quite a long time to do this, on the one hand because of the pandemic situation and, on the other, because we really needed the time to find the right form and make the right choices. Especially with a story like this, where Dilan knew very well what she wanted to make, it really needed some time.

What was the writing process behind the show?
Yurdakul: We tried to find out what the dynamic and wounds of these two people were. I found it very important to show the patriarchal world Esra lives in and what it does to her. In some ways, patriarchy also exists because women accept it, and this is what we see in Esra’s mother.

Does it have a particular visual style?
Yurdakul: The phrase we used a lot was ‘close to the skin.’ You want to feel everything the main characters experience to empathise with them. The visual style is a little bit dreamy and the lighting is sometimes surreal, to make it more like a real ‘trip.’

Van Dalen: The director, Arne Toonen, devoted himself completely to this project and, in addition to directing, he also co-wrote the series. The style is raw and fast. We are constantly with our two main characters but it never gets boring.

Dilan, what was the appeal of playing Esra and how did you prepare for the role?
Yurdakul: There are two Esras: the Esra before she’s ‘Bonnie’ and the one after. This consciousness was very important. I tried to find the places where Esra was really vulnerable and to connect with her wounds. She’s filled with resentment and has a difficult relationship with her parents, especially her mother, who rejects her a lot because of her own issues. She wants to be seen and to live, and everything that threatens that has to be moved aside.

You are also a creative producer on the series. How were you involved behind the scenes?
Yurdakul: I was involved with all the creative decisions, from the scripts right down to which tea glasses were part of the set. I believed we had to find a way to really involve the Turkish background of Esra and her dysfunctional family.

Where was the series filmed and how are locations used through the show?
Yurdakul: The real ‘Bonnie and Clyde’ moved mostly around the north-east of Holland. This is a more rural area, with a lot of space. We tried to find locations that matched with this feeling because of the desolation. They’re also in the car a lot, so the switch between these two opposites was very important.

What was your experience like filming the series?
Yurdakul: It was intense and full of hard work but, above all, it was a dream that came true, co-creating [a series] and being able to see how a seed in your head becomes real.

What challenges did you face?
Yurdakul: The biggest challenge was to hold on to the idea of telling this story through the eyes of Esra, and to involve the perception of her world with her Turkish background. The Dutch media often portrays a unilateral view of certain events. I was curious about the background story of this violent love tale. What drove them? I intertwined my fantasy with the little factual knowledge I had from the actual events. Which triggers make people derail and throw themselves into love?

The show will be compared to the 1967 film Bonnie & Clyde. How does the series stand apart? Are there any similarities apart from the title?
Yurdakul: The most important element of Bonnie & Clyde for me, which was also why the press called this couple ‘Bonnie and Clyde,’ is the love between two outcasts, who wanted to be seen. That’s the most important similarity.

Van Dalen: The similarity lies in unconditional love and wanting to die for each other and possibly even with each other.

How did you consider what the ending might be? Were there several possible outcomes?
Yurdakul: In the Netherlands, everyone knows the real couple were eventually arrested, but of course we imagined different endings where we could follow the couple more, especially the way they heal their wounds and take revenge.

Van Dalen: We talked about different plot endings, but it still felt best to stick to the real thing. They couldn’t get away with this. But that doesn’t mean they’ll never be released.

What are you working on next?
Yurdakul: I’m working on a theatre show, which is also based on a true event: a Turkish girl who was shot by her ex. She was stalked by her ex and made a lot of reports to the police but was not really helped. They didn’t take it seriously, and everyone apologised afterwards. I want to give her a voice now.

Van Dalen: We will be shooting a comedy early next year for [public broadcaster] NPO and hopefully a feature film based on a successful book in September. We are also working on a new kids series and a crime project. And, of course, I am super proud of Bonnie & Clyde and hope that we can produce more exciting series like this with Banijay Benelux.