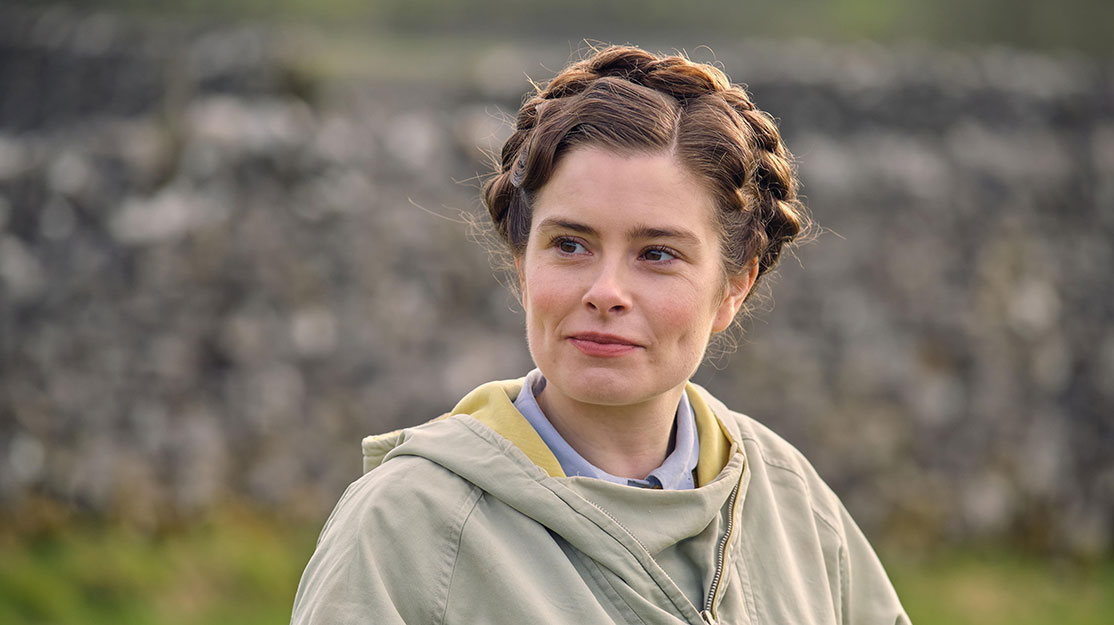 Rachel Shenton, one of the stars of All Creatures Great & Small, tells DQ about returning to the show for a second season, the secret to its genteel charm and making her Oscar-winning short film.

Despite being an Oscar winner, Rachel Shenton is arguably best known to UK viewers for appearing in more than 200 episodes of British teen soap Hollyoaks, before going on to star in series such as Switched at Birth and White Gold.

Actor, writer and producer Shenton and her director husband Chris Overton won an Academy Award for their 2017 short film The Silent Child. Written by and starring Shenton, it was based on her own experiences as the daughter of a deaf parent, telling the story of a four-year-old deaf girl who lives a silent life until a social worker teaches her to communicate through sign language.

She subsequently founded the Hear Art platform last year, with a focus on supporting the deaf community within the UK film industry.

Shenton can currently be seen on screen in the Channel 5 and Masterpiece PBS revival of All Creatures Great & Small, a new series based on the novels about life as a Yorkshire vet written by Alf Wight under the pen name James Herriot, 30 years after the classic BBC series of the same name ended.

Here, Shenton tells DQ about her role on All Creatures Great & Small, winning an Oscar and how the film and television business can best support deaf and other disabled people working in the industry.

Rachel, you’re back for a second season of All Creatures Great & Small. Introduce us to the series.
Our adaptation of All Creatures Great & Small is based on a series of novels written by Alf Wight, aka James Herriot. They are semi-autobiographical and centre on a young vet who leaves Glasgow, where he trained, to take a job in a sleepy village called Darrowby. We watch him get acquainted with life in the Dales, the landscape, the people, the animals, and how he quickly falls in love with it all.

You play Helen in the show. What can you tell us about her and how she fits into the story?
Helen Alderson is a farmer’s daughter, born and raised in Darrowby on Heston Grange Farm. She has a lot of responsibility for a young woman: she looks after the farm and the animals, drives the tractor – all the domestic duties, as well as taking care of her dad and younger sister. But then she has her head turned by the new vet in the village.

What can you tell us about events we will see in season two and what’s in store for your character?
Helen is used to having a lot of responsibility. She’s good at spinning plates with the farm, the animals, her dad, Jenny. That’s her role and she plays it very well, but it doesn’t leave a lot of time for anything else. In this season, we see James and Helen tentatively step towards each other, which allows her the space to have more fun and be more vulnerable. As a result, lovely things happen, one being that her relationship with Jenny starts to feel more like siblings – maybe even mates – as opposed to being parental, and that’s liberating for Helen.

Were you familiar with the original BBC series?
I wasn’t. It was a bit before my time! I made the decision not to watch it when I got the job. I knew it was loved by many and that it would be brilliant. I didn’t want to subconsciously copy anything.

What was the appeal of joining the show?
It was initially the sides, which are the pages from the script that you get sent to audition with. Helen’s directness and assertiveness really jumped off the page. It was a scene from season one, where she meets James for the first time and he’s up on the wall with a chicken under his arm, because he’s scared of the bull that she’s confidently wrangling, and I thought, ‘I like her.’ Then I read the books and fell in love with the world Alf Wight created.

How did you join the cast? Was there an auditioning process?
I did many auditions. I first put myself on tape and then I think there were another three auditions as well as a chemistry test with Nicholas Ralph, who plays James. So I earned it! When you finally book the job after so many rounds, there’s a feeling of relief as much as elation.

Were you able to use the books to prepare for playing Helen? Are the characters very similar?
The books have been my point of reference. Although we only see Helen through James, the way he describes her and how he feels about her helped me piece it together. I’m also very lucky that I have ongoing dialogue with Rosie White, who is the daughter of Joan White [the real Helen Alderson], so that’s been invaluable. She’s told me many stories that have helped shape Helen.

What’s it like filming on location in Yorkshire?
The best! That’s it. I absolutely love the place and the people. Every time I’m there, I find myself spending too much time on [property website] Right Move. My drive to work is breathtaking, surrounded by 360 degrees of undulating countryside. You can point a camera in any direction and it looks like a postcard.

Was the second season affected by the pandemic? How did it change the production process?
We were led gallantly by Phil Pease, our on-set medic. It was a case of lateral-flow and PCR tests weekly, masks when rehearsing, social distancing, and lots of dinners-for-one in the evening. To be honest, it was all a small price to pay. I felt so lucky to be working – many of my friends weren’t. There was a lot of trepidation when starting the show back in March because we were really in the thick of it and we were hearing stories of other productions that had to shut down due to positive results. But thankfully we got through the five months with no positive cases, and that’s down to the brilliant cast and crew that stuck to the rules.

What challenges do you face as an actor making All Creatures Great & Small?
There are the obvious physical challenges in this series, which include shooting in sub-zero temperatures in the Yorkshire Dales and shooting in summer and making it look like winter. A personal one is that Helen Alderson grew up on a farm and so, of course, has been around animals since she was a toddler, so I needed to feel and, more importantly, look like that was something I do every day. It can be a challenge when the task is to wrangle a bull that weighs two tonnes around the farm.

The series has proven to be a big hit, not just in the UK but overseas. What is the secret to its charm?
All Creatures came out [in 2020] at a time when the world felt particularly cruel. I think it was a great reminder of what humanity is. There’s a truthfulness about Darrowby and the lives of the people who lived there. Ben Vanstone’s scripts are jam-packed with humility and love, and I don’t think it’s ever felt more relevant.

You also starred in Oscar-winning short film The Silent Child, which you wrote and produced. Tell us about the project.
The Silent Child is a 20-minute short film about a profoundly deaf little girl who is born to hearing parents. The project was a labour of love, as most short films are. We crowdfunded and made it on a shoestring, so I’m very proud of what we achieved. It was a story I felt needed to be told.

Why did it need to be told, and how did you bring it to life alongside your husband?
I had been campaigning for deaf awareness and access to education for deaf children for years alongside organisations like the National Deaf Children’s Society, and I was frequently feeling frustrated. I believe film is one of the most powerful mediums to portray a message because it’s emotive. It was also practical for me as I was doing a show in America called Switched at Birth, which was coming to an end, and I didn’t have anything to go on to, so it felt like the right time.
Chris read the script and, thankfully, he loved it, so we committed to making it. We crowdfunded using the Indiegogo platform and raised £10,000, then begged, stole and borrowed to shoot it. Casting was crucial. We did a nationwide search for the lead actress who would play Libby. We met hundreds of children with varying levels of deafness and then Maisie Sly walked in and blew us away.

What are the aims behind Hear Art, the organisation you set up in 2020?
Hear Art was set up by Cindy Sasha and myself in partnership with Royal Association for Deaf People and Slick Films, with an aim to merge the deaf and hearing film industry. We are making three short films, each directed and written by incredibly talented deaf creatives, and each film commits to 50% deaf and 50% hearing cast and crew. We want to create a safe space where people can ask questions, get it wrong and work together, hopefully starting conversations about communication and accessibility on a film set.

Disability is currently a major talking point in the TV industry, not least because of Jack Thorne’s recent MacTaggart lecture at the Edinburgh TV Festival. What do you think needs to change in the industry to ensure disabled actors, writers and other artists are supported and their stories are told?
I watched Jack’s speech and it was fantastic and I echo everything he says. In my opinion, TV and film is supposed to mimic real life, yet disabled people are still hugely underrepresented. We must see more disabled characters in leading roles and more disabled writers and directors telling stories.

After The Silent Child, what are your ambitions in writing and producing?
I hope to keep creating projects that I’m proud of, it’s really as simple as that. I’m working on two things at the moment that are moving along nicely, so I’m happy. Writing is great when it’s going well. When it’s not, it’s hellish, but thankfully it’s going well right now.