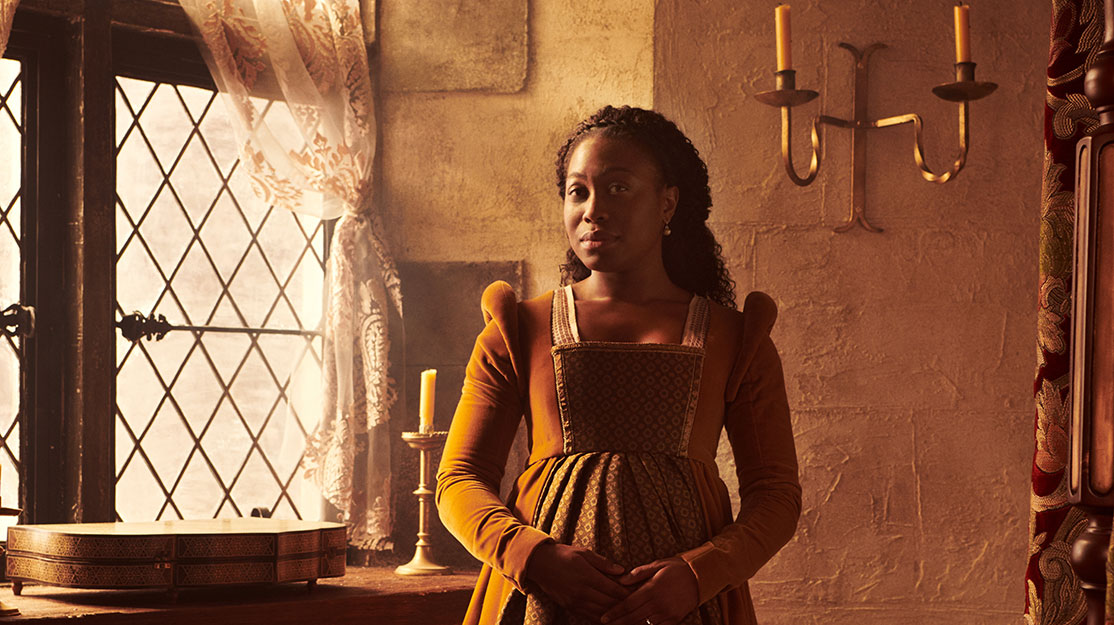 Stephanie Levi-John speaks to DQ about her role in historical drama The Spanish Princess, playing Catherine of Aragon’s lady-in-waiting and bringing diversity to the court of Henry VIII.

While The Spanish Princess has shone a light on the life of Catherine of Aragon, the woman who would become the first of King Henry VII’s six wives, the series is also notable for upending the traditional narrative of historical dramas with its depiction of a multiracial society in 16th century England.

The series, commissioned by US premium cable channel Starz, opens with the arrival of Princess Catherine to England in 1501 and her first meeting with husband-to-be Prince Arthur, the heir of reigning Henry VII. But following Arthur’s death, she falls for Henry, his younger brother.

The second and concluding season of the show, which launched last month, continues the story of the now Queen Catherine (Charlotte Hope) and Henry VIII (Ruairi O’Connor), as their struggle to produce an heir places her marriage and Catherine’s position in the court at risk.

Accompanying Catherine on her voyage from Spain is Catalina de Cardonnes, her black lady-in-waiting, who serves as Catherine’s closest confidante, advisor and ally while also building a family of her own with Oviedo (Aaron Cobham), one of Catherine’s guards.

“I absolutely love that Lina is the black woman at court,” actor Stephanie Levi-John tells DQ. “It sends such a powerful message because before I even found out about this, I just didn’t see myself within this period of history. The showrunners flipped it on its head and said, ‘Actually, no, the presence of black people and people of colour was very much permanent during the time.’

“Obviously, it’s not as much as now. But when I did go back and read about this period of time and the presence of people of colour, there are things written about people who used to come from all over the world to study here. There were scholars here. There was trade. And so when these things happen, there is a movement of people.

“It’s really important to have Lina in a period drama because it shows we were part of the aristocracy, we were part of life. We didn’t just pop up randomly one day. We’ve been very much a part of history. She’s a very multifaceted, fully rounded character. She’s not there for gimmicks. She’s not a stereotype. Her place within the court is valid, and representation is extremely important because my career started from seeing somebody who looked like me on the stage.

“It’s extremely important to have the presence of this woman – who has such influence at court and with Catherine – on a TV show like this, because hopefully it will inspire people to research more and to learn about the history that isn’t necessarily spoken about.”

Lina is Levi-John’s biggest role to date, and the actor says it was exciting to pick up her story in Part Two, which begins in 1511 in tragic circumstances with the death of Catherine’s six-month-old son, Henry. As the problems in Catherine’s family life escalate, Lina is revealed to be pregnant by Oviedo, bringing into focus the widening gap between the lives of the two women.

“Lina, to me, is basically a modern-day woman,” Levi-John explains. “She’s trying to balance her family and her home life and then go into work and deal with Catherine, who’s very much her best friend and her sister. But she’s also her boss, so it’s very difficult for her to find a balance.

“All she wants is peace. She doesn’t want to be mixed up in all of the drama and everything that happens [at court]. She just wants to live a very simple, happy life, so a lot of things really affect the friendship between Catherine and Lina. One thing I love about this show is it doesn’t give a two-dimensional view of what friendship means and the trials and tribulations that happen within a friendship. Lina has to put her family first and, obviously, that causes some friction with Catherine. Essentially, this is a break-up story.”

An actor from a young age, Levi-John discovered a love of scriptwriting at university but later decided to pursue acting. She began on stage, specifically in children’s theatre, which she describes as a baptism of fire.

“They are the most honest audience. If they do not like something, they will let you know,” Levi-John says. She then veered into other forms of theatre before going into television, taking roles in legal drama Striking Out and comedy Not Going Out before landing her breakout role in The Spanish Princess.

Created by co-showrunners Emma Frost (The White Queen, The White Princess) and Matthew Graham (Life on Mars), it is the third instalment in Starz’s historical drama franchise, following The White Queen and The White Princess. Based on Philippa Gregory’s novels The Constant Princess and The King’s Curse, it airs on Starz in the US and Canada and on streamer StarzPlay in Europe and Latin America.

“I remember reading the first three episodes and, after I’d finished the third page, I stopped for a second, thinking, ‘I have to play this woman. She’s amazing,’” Levi-John says of Lina. “Once I got the part, which was the best day of my life, I found there’s not really much information about her. I really have the utmost respect for Emma and Matthew for going into more detail and really trying to flesh out what is the little that is known about Catalina.

“I tried to put myself into her shoes and think of what it would be like coming from another country to a country where you’re dealing with a different language, a different culture and a different way of life. My journey to finding my character was a little bit different from the other cast members because there’s a lot written about [their characters]. But that’s part of the challenge and part the fun of creating this incredible woman.”

Despite its historical dressing, The Spanish Princess deals with modern themes such as motherhood, love, betrayal and deceit, with the numerous figures attending court each having their own competing agendas and being willing to step over each other to achieve their ambitions.

“Dealing with motherhood [in the show] was the most challenging thing for me because I’m in my early 30s and I always say there’s this weird thing that happens when you hit your late 20s and you’re single and suddenly all your aunties are asking you why you are not producing a child,” Levi-John says.

“Everybody’s got their own aspects of motherhood and it really brought things close to home for me. Sometimes I had to work a little bit harder to disconnect myself from what I’d done at work, because the subject matter is very close to home, dealing with women and women’s issues. It was definitely an eye-opener. Some days were more difficult than others.”

Filming on the series was completed just a week before the UK went into lockdown in March, and Levi-John has since rediscovered writing – an activity she describes as cathartic.

Meanwhile, The Spanish Princess offers pandemic-weary viewers the chance to enjoy some escapism into ever-popular historical drama while also continuing the franchise’s focus on looking at events and figures in British royal history from a female perspective. The cast also includes Georgie Henley as Henry’s younger sister and Queen of Scotland Margaret Tudor and Laura Carmichael as Maggie Pole.

“The world is in love with period drama,” Levi-John says. “It’s the elegance and the decadence and the dresses. Then there’s a sense of escapism that comes with watching period dramas. But the subject matter really doesn’t change through time, and that’s one thing that people really enjoy watching as well.

“Now we’re getting a female perspective of what these women went through. Before The Spanish Princess, Catherine of Aragon was [Henry VIII’s] wife number one with the little rhyme – divorced, beheaded, died… She was divorced. She was the first one. But this was a woman who was married to this man for 20-plus years. What does it what does it mean to be married to the king? It’s so interesting to me to actually delve deep into the life of these women, and we see them as human beings rather than others.

“Catherine of Aragon has been reduced down to, ‘Oh, she couldn’t have a son so he divorced her.’ People are excited to see the other side of the story, and that’s the beauty of The Spanish Princess.”