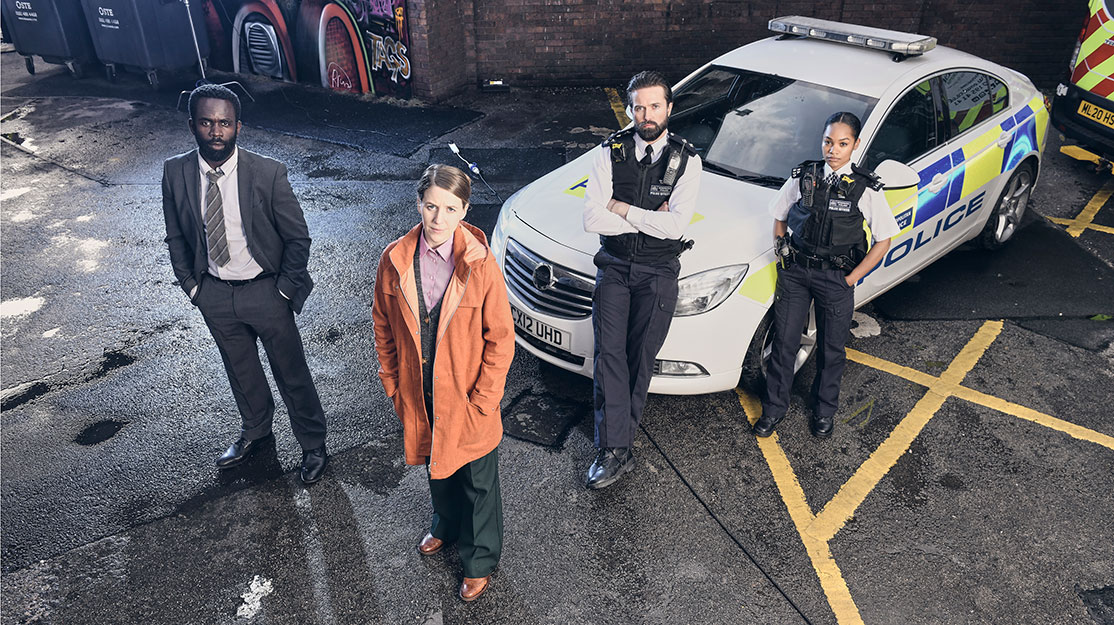 Writer Patrick Harbinson joins stars Gemma Whelan and Tahirah Sharif and executive producer Damien Timmer to take DQ inside ITV crime drama The Tower, which follows events after two people fall to their deaths from the top of a building in London.

Shooting scenes for ITV’s The Tower on a beach near Liverpool, Tahirah Sharif was struck by how much her surroundings looked like a scene from a sci-fi film. “It was surreal, almost like another planet, as the tide was very far out and there was just this expanse of sand,” says the actor, who plays rookie police officer Lizzie Adama in the crime drama.

Director Jim Loach encouraged her to harness the atmosphere and to use the elements in her performance. “It was grey and monotone and looked beautiful but desolate. It was fitting because, at the time, my character was feeling isolated, desperate and full of despair.”

Lizzie’s emotional state becomes more understandable after the gripping opening scenes of The Tower reveal that veteran officer PC Hadley Matthews (Nick Holder) and teenager Farah Mehenni (Lola Elsokari) have plunged to their deaths from the top of South East London tower block. Lizzie, an ambitious young officer just six months into the job, is left alive on the building’s roof, alongside a five-year-old boy.

A botched investigation into the circumstances of the deaths means Lizzie, who is sent home rather than questioned, seizes the opportunity to go on the run. But what is she running from?

Charged with uncovering the truth is Detective Sergeant Sarah Collins (Gemma Whelan), who must establish the sequence of events that cost two lives and get to Lizzie before she comes to serious harm. DC Steve Bradshaw (Jimmy Akingbola) is partnered with Collins to help with the investigation, while uniformed police inspector Kieran Shaw (Emmett J Scanlan), who appears to know more than he is letting on, makes attempts to derail the operation.

Produced by ITV Studios-backed Mammoth Screen and Windhover Films, the three-parter – which began last night and continues tonight and tomorrow – is adapted from the crime novel Post Mortem written by Kate London, a former detective in the Metropolitan Police’s murder squad. The book was passed to Homeland and 24 writer Patrick Harbinson by London’s agent, and he was immediately struck by London’s prose.

While several parties fought for the rights to the book, Harbinson was ultimately chosen because he would also write the screenplay. “With other companies, there would have been that whole process to find the writer, all that necessary dance, whereas in my case, we could just cut to the chase,” he tells DQ.

London was also involved in Harbinson’s writing process. “She had been through the experience of Post Mortem being adapted by, I think, two writers unsuccessfully, so she was nervous. I shared outlines to show her my process and to get her comments, creatively as a very clever and informed reader and also as the author of the book,” he says.

But Harbinson admits that had she not already been fleshed out in London’s novel, he would not have been able to invent Sarah Collins, who stands as an outlier and outsider among the other characters he has written for TV, such as Carrie Mathison (Claire Danes) in Homeland and Emma Banville (Helen McCrory) in Fearless. “I’m glad to have had Post Mortem to help me discover who Sarah is and can be,” he notes.

While scenes and backstory were cut from the book to help it translate to the screen, Harbinson says the biggest difference between the series and the original text is that Lizzie is black. “I knew if I were lucky enough to win the option and get even one book made, I didn’t want to see two white actresses in the leading roles. For a TV series set in contemporary London in 2021, it felt, not wrong exactly, but too easy, almost tone-deaf,” he explains. “I also knew it would make the story resonate in all sorts of different ways.”

Harbinson is a methodical writer. His creations begin as meticulously neat notes in a pad, while scene ideas are written on cards that are storyboarded on a wall. If the groundwork is done properly, as he puts it, the script writing process is quick: a couple of weeks will produce a first draft. But Harbinson never stops writing the screenplay. “With The Tower, I was doing drafts of the script in post-production. Each episode I write has at least 20 or 30 drafts,” he says.

As a writer who has operated on both sides of the pond, Harbinson says US and UK working cultures are markedly different. In the UK, there is more work for shorter series, such as The Tower, while in the US, he says the bare minimum is a 10- or 12-hour season. “You’re working flat-out all the time and that means you have other writers in the States [working with you],” he says. “The beauty with that is, if you’re having trouble with a scene, you can always ask someone.” In the UK, however, on projects with fewer episodes, Harbinson writes the script alone.

“If I have a real problem with the writing, it means that I have to sort it out myself. There are moments that I feel I didn’t get right still in The Tower and I would have got them right in America because I have people I can turn to.” Laughing, Harbinson won’t be drawn on those exact moments in the series.

It is not the first time Harbinson and Mammoth CEO and The Tower executive producer Damien Timmer (The Serpent, Endeavour) have collaborated on a project together, with fellow political thriller Fearless among their shared credits. So what’s the secret to their creative relationship? “We’re both pessimists and dislike a lot of what we do,” Harbinson answers. “There’s a helpful negativity between us, which means we are pushing each other and ourselves all the time.”

There is the odd difference of opinion, the duo say, particularly as the pair pay as much attention to the smaller details as they do to the bigger picture. They will often discuss a line that’s not on camera spoken by a minor character. One will state their case to have the line a fraction louder in post, while the other will want to lower it to the point that it’s almost inaudible.

Shooting for the series took place in and around Liverpool and Manchester, though the Covid-19 pandemic prevented the usual location searches, with settings instead being chosen by the team via file-sharing platform Dropbox.

“It’s not the same and it was one of the great frustrations of the past two years,” says Timmer. The Northern cities stood in for London, a filming technique Harbinson says he is used to. “Homeland was shot in North Carolina and it was supposed to be Washington. The Brody family’s house in the show was a set and it wasn’t a particularly beautiful set,” he says. “I’m used to even the highest-quality American shows being shot elsewhere.”

Meanwhile, Whelan, whose previous acting credits include Killing Eve and Game of Thrones, says her character DS Collins is “incredibly black and white and plays completely by the book.”

The actor says that one of the most striking locations used during the eight-week shoot, which included a week of pick-ups in London, was the former Martins Bank in Liverpool. The 18th century building has also appeared in Harry Potter spin-off Fantastic Beasts & Where to Find Them and Stephen Poliakoff drama Close to the Enemy. “It was just a beautiful building, and we used the vaults downstairs as a prison,” she says.

Both Whelan and Sharif, who starred in Netflix horror series The Haunting of Bly Manor, say the most difficult scene to film was in the final episode, when their two characters meet for the first time in an interrogation room. “It’s 11 pages of dialogue and was very difficult as Lizzie keeps responding just ‘no’ to all the questions, much like Kelly Macdonald’s character in Line of Duty,” Whelan says. The actor prepared by drilling the lines repeatedly with her husband, comedian Gerry Howell.

Describing the scene as “daunting,” Sharif says she did not practise with Whelan before filming. “It was appropriate because the characters don’t know anything about each other. When we shot the scene, it helped as we didn’t know what was driving each other’s questions or answers, so it was very organic,” she notes.

The actor also says she had to wrap her head around the script’s police jargon – and her character’s uniform. “What struck me was just how much uniform officers wear. There’s boots, shirts, fleeces, stab vests, utility vests and so on, and it was heavy,” she says. “Having to chase after someone in all the gear is really difficult. You have to be quite fit!”

From the storyline and the characters to having former officers on set as consultants, ITV Studios-distributed The Tower is a police drama through and through. But what makes it stand out in the genre’s oversaturated market? “Shows about the police usually focus on a maverick hero who solves extraordinary crimes with unorthodox methods, and that is undoubtedly compelling viewing,” Timmer says. “But what I love about The Tower is that it looks at the institution of the police in a very balanced, wise, humane but also exciting way.”