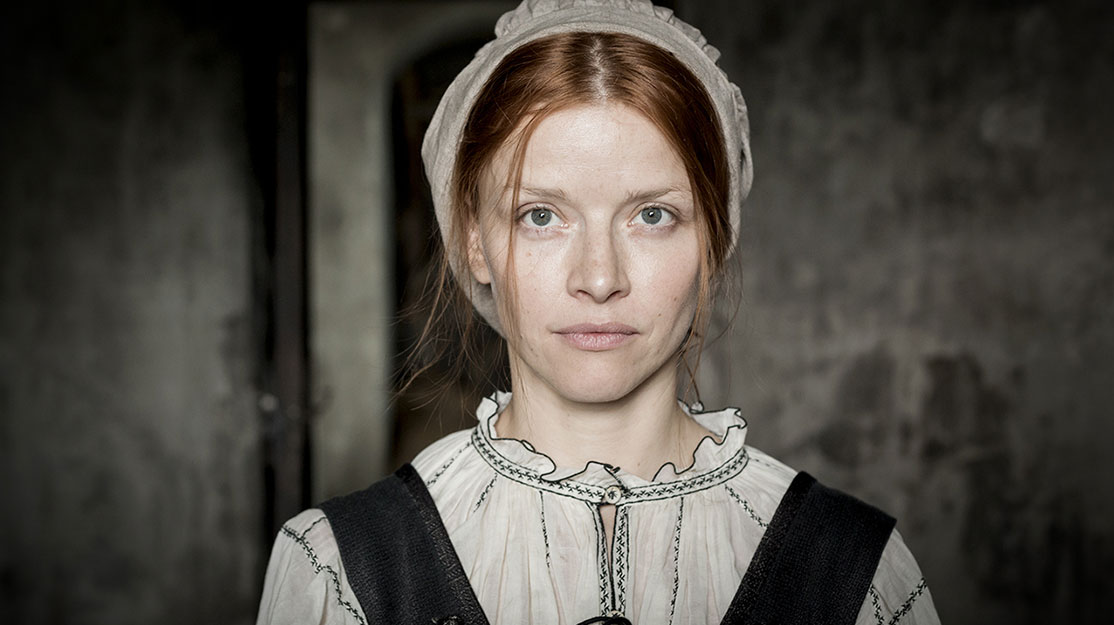 DQ hears from writer Christian Schnalke and producer Mario Krebs about Katharina Luther, a TV movie that tells the story of Christianity reformer Martin Luther from the viewpoint of his wife, Katharina.

It’s a TV movie 500 years in the making, retelling the story of Martin Luther and the 1517 publication of his Ninety-five Theses that would send reverberations through the Christian church and change Europe forever.

But uniquely, Katharina Luther (also known as Luther & I) retells this story from the point of view of Luther’s wife, Katharina.

Abandoned on the doorstep of a convent at the age of six, Katharina (played by Karoline Schuch, pictured above) lives the life of a nun until she becomes acquainted with the writings of the reformer Martin Luther (Devid Striesow), opening her eyes to a new world of ideas.

She flees from the convent but when she meets Luther, he is not the imagined ‘fighter’ who is wreaking havoc throughout Europe; he is vulnerable, ill and full of doubt. Their wedding marks the beginning of an entirely new life for Katharina. Going on to mother six children, she also becomes a successful businesswoman and a key figure in the earliest awakening of women’s emancipation.

The drama, which debuted on ARD/Das Erste in Germany in February to 7.28 million people, is produced by Eikon Süd, Cross Media, Tellux Film and Conradfilm in coproduction with MDR, ARD Degeto, BR and SWR. Global Screen is distributing the made-for-TV movie.

Speaking to DQ, writer Christian Schnalke and producer Mario Krebs reveal the importance of commemorating this story on the 500th anniversary of the Reformation, the challenge of producing the film in just 40 days and why Katharina’s experience is a universal story that will appeal to international audiences.

What are the origins of Katharina Luther ?
Christian Schnalke: The idea is to present the Reformation as a riveting and emotional drama. It is the story of Martin Luther’s family, in which the convictions of his faith are tested in both a loving and tragic manner.
Mario Krebs: As 2017 approached, with it being a reminder of the beginning of the Reformation [marking 500 years since Luther’s Ninety-Five Theses], an event movie was called for that in no way resembled the countless films about Martin Luther. ARD was in full agreement with us on this point. What could be more relevant than telling the story of Katharina von Bora?

How was the drama developed with the network?
Schnalke: The co-operation was trusting and constructive. The station gave us the freedom to develop our own ideas and encouraged us to pursue unusual solutions.
Krebs: Until Christian took over the project on my suggestion, the network and we producers had tried numerous approaches with different writers, but unfortunately none of them worked. It had to be a process of mutual understanding.

Why was this a story you all wanted to tell?
Schnalke: It’s the story of a heroine left with nothing but her faith and her will, who must face the most daunting of obstacles – the all-powerful church, family, society, her faith, fateful misfortune – and, despite everything, manages to create a happy life for herself and her family. What could be more inspiring?
Krebs: Katharina is willing to oppose all of the rules of her time, which incurs great risk. Who would not want to accompany her to see how she manages to maintain such a focus on her goals? We follow her into a world strange to us, and are spectators as she conquers that world.

How would you describe the writing process?
Schnalke: Learn, read, discuss, write, and fantasise – to get close enough to Katharina and Martin to understand their needs and their motivations. That was the hardest part. As far as the characters themselves go, they have been almost automatically formed by history itself.
Krebs: It was wonderfully co-operative between the writer, network, director and producer.

How did you create the show’s look and style?
Krebs: From the beginning, director Julia von Heinz had a very clear artistic and visual concept with which she first convinced the producers and then the network. My task was to work with her to find the right department heads for production design and costume and to support them in any issues with the network, and also to help stay abreast of the network’s requirements regarding time and broadcasting slots. It was productive that Julia had brought in Daniela Knapp at the very beginning so she was there as director of photography during the entire process.

How important were production design and costumes in creating the world?
Krebs: Very, very important. We wanted to completely immerse viewers in the ambience of the time, which was far from pleasant.

How did Karoline Schuch land the lead role and what did she bring to the character?
Krebs: For myself as well as Julia, Karoline was the clear first choice. It’s the combination of her fragility, tenderness and her determination that carries the film.

Why was it important to tell this story from Karoline’s point of view?
Schnalke: By seeing Martin Luther and the Reformation through her eyes, we become familiar with the man, Luther, and understand just how difficult it was to fight for his beliefs in that time.
Krebs: Because it shows the path to an awakening, with all its risks and without a safety net.

Where was the drama filmed and how were the locations used?
Krebs: Everything was on location. We were shooting at historic sites in Thüringen, where Luther was born, and in Saxony-Anhalt, where he had a strong presence. In these areas of the former DDR, the inadequate economic resources of the Stalinist regime has left much intact that has long since disappeared in the west. In an old, empty castle south of Gotha, we built the Black Monastery, into which Katharina moved after she married Luther.

What were the biggest challenges during the production?
Krebs: Because we had only 40 days to shoot and studio time was not feasible due to financial constraints, we had to shoot the ending first. That meant beginning with the renovated and comfortable Black Monastery as it was arranged and furnished by Katharina, then gradually moving backwards step by step through the demolition of the furnishings to the ruin Katharina finds at the beginning. On the days that the castle required reconstruction, we were on location shooting the street scenes, the scenes at the Cranach, at the Monastery of Nimbschen, at the court of the family of Bora and others.

Why might this story also be appealing for international audiences?
Schnalke: The events depicted in the show changed the entire world. For all of us, to experience them so vividly underlines the importance of defending these values that for 500 years have been fought for by the bravest of our ancestors. The stories of people who find each other in the midst of the fight for their convictions inspire every human being, worldwide.
Krebs: The story of a woman, fuelled by love and hope, who goes her own way despite all the resistance and obstacles is one everyone on every continent understands.

What are you working on next?
Schnalke: I’m enjoying my work on a novel, a psychological thriller about German artists shortly after the Napoleonic wars.
Krebs: The Swiss company C-Films, supported by EIKON and me, is preparing a feature film about the reformer Huldrych Zwingli, who, in the city-state of Zurich in 1519 – and unlike Luther – chose a humanistic path for his reformation. By organising the citizens to vote, freedom was won, albeit a freedom that was eventually defended with weapons raised against the ‘ancien régime.’