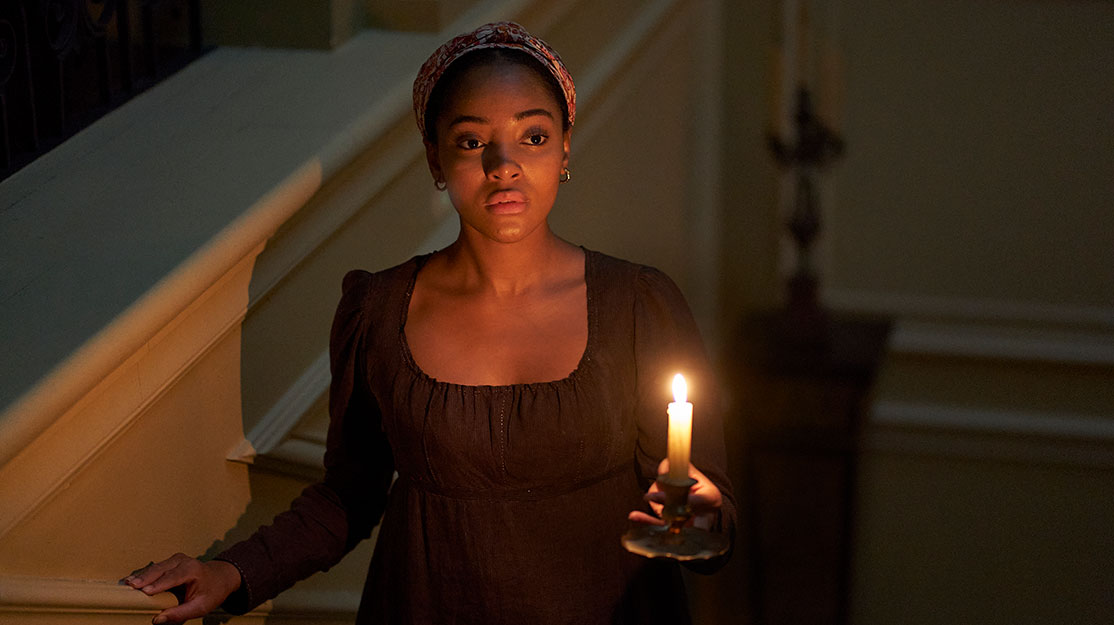 First-time screenwriter Sara Collins reveals how she was persuaded to adapt her novel The Confessions of Frannie Langton for streamer ITVX and explains why the four-part miniseries isn’t your average period drama.

Author Sara Collins has gone straight from one first to another. Fresh from penning her debut novel, the gothic historical drama The Confessions of Frannie Langton, she’s now turned her hand to screenwriting for the first time, writing a four-part television adaptation of the same critically acclaimed book.

Commissioned by ITV for its new streaming platform ITVX, the series follows Frannie’s journey from Jamaican plantation to Georgian London and the grand Mayfair mansion of scientist George Benham and his wife Madame Marguerite Benham.

When the Benhams are found dead in their beds, with Frannie lying next to them, she is accused of murder. Fiercely defending herself from accusations of killing the mistress to whom she was devoted, Frannie attempts to piece together what really happened – a task made more difficult by her laudanum addiction.

“Hopefully it’s not your average period drama, it’s a little bit of a jolt,” Collins tells DQ. “I’m hoping that in the first 10 minutes, people will see a take on the British period drama that’s never been offered on screen before.”

Former lawyer Collins first wrote the novel as a response to “frustration” she felt over black characters in late 18th and early 19th century historical fiction being seen only through the lens of slavery and as victims. Combined with her love of gothic novels, this motivated her to write a story she hadn’t seen before and fill a gap she felt existed as a reader.

TV producers also saw a gap in the market, and it was two years before the novel had even been published that Drama Republic (The English, Doctor Foster) won a keenly contested auction for rights to the book. However, plans for the adaptation had to put on hold until Collins finished publicity duties ahead of the novel’s release in March 2019. Then, when she was available, work began in earnest to transform it for the screen.

Collins jokes that she once thought if she ever had a novel published, she would never let anyone adapt it, such was her belief that literary novels such as Frannie are incredibly difficult to bring to the screen. “So at first I was really reluctant when Drama Republic reached out to me through my agent, and my agent and I had discussions about my reluctance. But I was ultimately convinced because they were offering me the chance to do it myself, which was significant,” she says, describing herself as a “first-time novelist, no-time screenwriter.”

Told by her agent it would be “foolish” to turn down the opportunity, Collins was eventually persuaded, but found that the difficult and demanding challenge of adapting her novel lived up to her initial fears.

“Ultimately, what we had to do was blend literary aspects of the novel with the screenplay form, which means it has to be more visual, more compelling and slightly pacier in different ways. But that’s not a bad thing because what you’re aiming for is something that’s different [from the original material] but equally compelling, and that somehow retains the core of the original story without trying to replicate it.”

From the outset of the series, which launches on ITVX on December 8, Frannie (played by Karla-Simone Spence) is a character who subverts the expectations of those within the Benham household, who are surprised to discover she is a strong, educated woman who is not afraid to speak her mind. And although she is desperate to leave the house after discovering she has been gifted to the Benhams as a maid by her ‘owner,’ John Langton, her budding relationship with Marguerite (Sophie Cookson) soon gives her reason to stay.

“Nothing about her should be strange,” Collins says of the central character. “It is because of the world she’s been born into and the world they’ve inherited that it’s still strange to see a black woman who is educated, but not just educated, asserting her intelligence and her education. She’s complicated, she’s angry, she’s passionate, she’s all of those things you wouldn’t have expected from a woman like her at the time, and probably even nowadays.”

One way the miniseries does divert from the book is Collins’ increased focus on the love story at its heart.

“Frannie is really ambivalent about being in England to start with – not just ambivalent, but downright disgusted about being in the house she finds herself in,” Collins says. “But then she forms this relationship with her mistress, which, again, is subversive. Everything she does subverts expectations. Could they possibly have what we might recognise as a genuine love between them? That is a question viewers might debate. But they find a connection, companionship and understanding. And even if it is as tormented, twisted and dark as gothic romances are, it’s genuine for both of them. Love was a really big part of Frannie’s journey, which I see as one of self-acceptance.”

Whether or not viewers believe Frannie is guilty of murder, Collins wanted to ensure the title character was always interesting and intriguing enough for the audience to follow her through the story. She also wanted Frannie to be unlikeable in some ways, to avoid the idea that her victimhood would make her a pious, sympathetic figure.

“I wanted her to be challenging, and the idea that she could have done this is not an illogical one,” she notes. “If I think about what my response would have been to the things done to her, to the horrible things done to her and what she’s experienced, it wouldn’t necessarily be illogical that violence and murder would have been the result. But when you get to know the character, there’s a vulnerability underneath which I think Karla-Simone draws on brilliantly in her performance. What you want in a good did she/didn’t she is a capacity for people to be equally convinced she did and didn’t at the same time. That comes from the complications in the character herself.”

Coming to screenwriting for the first time, Collins admits she had to make numerous compromises to reshape her 300-page novel into four hours of television, not least when considerations relating to budget, actor availability and locations were thrown into the mix.

“When you’re writing a novel, you’re limited only by your imagination. You can put anything on the page. When you’re writing a screenplay, you can put it on the page but someone might say, ‘We’re not going to be able to film this.’ There were things, particularly in relation to Jamaica, that I personally would have loved to expand upon but, for all of those reasons of compromise, we have to make adjustments and be clever in dealing with it.”

Writing all four episodes, Collins was also involved in casting and enjoyed a handful of visits to the beautifully realised set in Yorkshire before she also contributed to the editing process. “That’s where I learned that you can shape the thing as much in the edit as you do in the screenwriting itself,” she notes.

Working with her behind the scenes were Drama Republic co-CEO Greg Brenman and script executive Beccy de Souza, who both executive produce alongside Collins. Andrea Harkin (The Trial of Christine Keeler) directs the miniseries, which will also air on Telekom/Magenta TV in Germany, NPO in the Netherlands and BritBox in North America, Australia and South Africa following deals with distributor All3Media International.

“It has been a fantastic, brilliant journey because Sara’s a totally new writer, which doesn’t show at all,” de Souza says. “She’d never written a novel before. She’d certainly never written a screenplay before, so she’s taught herself to be a screenwriter with us. She is so astonishingly clever and adept. She’s just a real master of her craft.”

Brenman continues: “I produced Samantha Morton and Ciarán Hinds in an ITV Jane Eyre [adaptation] years and years ago, and Sara said, ‘Imagine a black Jane Eyre who shags the mad woman up in the attic and kills Rochester.’ That’s not Frannie to a T, but that ambition was really interesting.”

In terms of adapting the novel, Brenman says there were two pillars to the process, namely how to tell the story in TV form and how to retain the book’s intimacy.

“One of the challenges was presenting Frannie with the same depth and dexterity as she has in the book, and one of the useful devices we use is voiceover, because it gives you such a great relationship between the central character and the viewer on an individual basis. It’s very personal, very subjective.”

Looking back on writing the series, Collins says one lesson she has learned is to never adapt your own novel. “Just don’t do it,” she says. “But there’s a bit of a dilemma there because you might not want someone else to do it either. It’s certainly difficult, but I do love the process of adaptation and screenwriting, so I am working on a few other adaptations now.

“For me, the most important thing is come to it with the understanding of storytelling and story structure. Novelists are quite snobby about structure – they pretend it just comes naturally and you don’t need to study it. But that’s a ridiculous suggestion. What’s refreshing for me is that, in screenwriting, there’s this acceptance that there’s a bit of a formula to a story and you do have to understand that to get it right. That can actually be quite liberating because, once you’re not worried about whether the structure is working, you’re freed up to really explore the characters creatively.”

Collins is now “tinkering” with her second novel, although she is now restricted to working on it during evenings and weekends while she focuses on the new screen projects she’s developing.

But she also envisions the possibility of a spin-off from The Confessions of Frannie Langton, one which focuses on her favourite character, Sal, played in the series by Amarah-Jae St Aubyn.

“She’s the voice on Frannie’s shoulder trying to get her to do the right thing, and she has a really interesting story of running a brothel that’s known as spanking parlour for all the great and good men of London – the judges, MPs and lawyers who come and get spanked by these women, including Sal,” Collins says. “Imagining all the leading men of 19th century London in the spanking parlour would be a great premise for a TV show.”