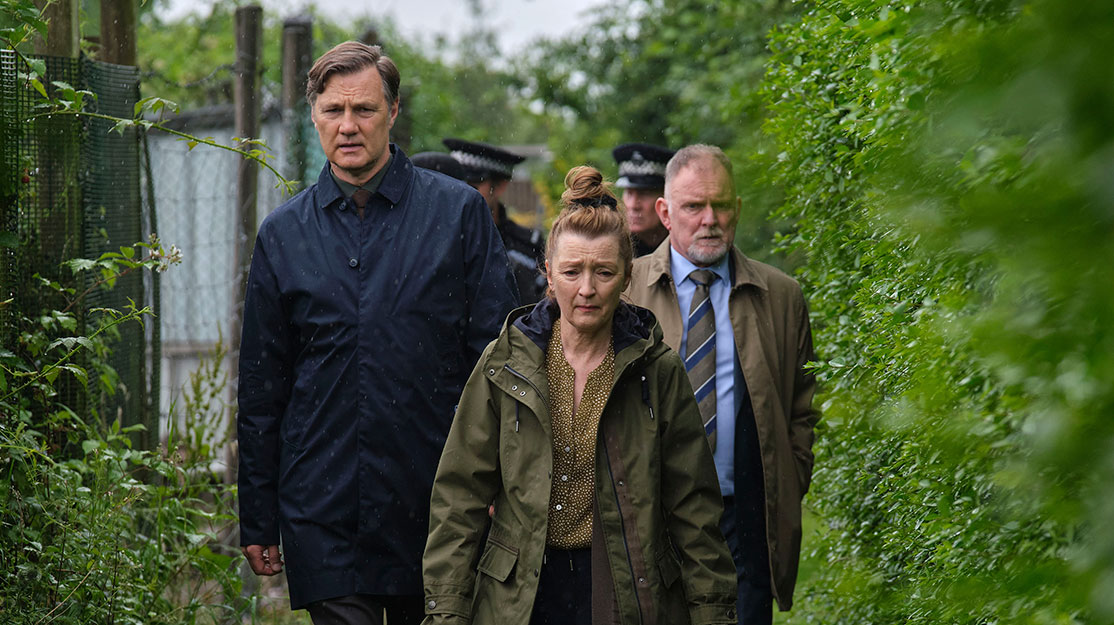 For six-part drama Sherwood, writer James Graham returned to his Nottinghamshire roots to tell a story of a close-knit community rocked by two shocking and unexpected killings.

As the police launch a manhunt for the killer, suspicion and antipathy build – between lifelong neighbours and towards the police forces that descend on the town – as the killings threaten to inflame historic divisions sparked during the miners’ strike three decades earlier.

Inspired by real events and set in the mining village where Graham grew up, the series is a crime drama that also seeks to explore the frayed social and political fabric of modern-day, post-Brexit Britain from the perspective of those who live in ‘Red Wall’ (traditionally Labour-voting) areas in often forgotten and marginalised former industrial towns.

David Morrissey stars as Detective Chief Superintendent Ian St Clair, a local police officer who is tasked with finding the link between the two killings and forced to reunite with DI Kevin Salisbury (Robert Glenister), an old rival from London’s Metropolitan Police, whose arrival threatens to inflame already febrile tensions.

Gary Jackson (Alun Armstrong) is a former miner who was on the picket line in the 1980s and is continually at odds with his neighbours, while his wife Julie (Lesley Manville) is estranged from her sister Cathy (Claire Rushbrook) over their divided loyalties during the strike.

Distributed by BBC Studios, the series – which starts today – reunites Graham with House Productions, who previously collaborated on Brexit: The Uncivil War.

Here, Graham, Morrissey, Froggatt and Gill discuss the origins of the drama, getting into character and why the series is a timely portrait of modern Britain.

Graham had long wanted to tell a story set in his home town.
Graham: I’m impossibly proud to have grown up and come from where I come from in north Nottinghamshire, which is a former mining village that doesn’t always get a voice on the national stage. I sometimes feel like, especially at the moment where everyone’s talking about levelling up and the ‘Red Wall’, everyone’s talking about us but no one’s talking to us. I felt it would be a huge privilege and responsibility to give voice to the kind of people and characters I grew up with and the issues that still compound us every day.

But he could often feel the weight of responsibility in basing the story on real events.
Graham: What inspired me to write this story was the themes and issues about how the past speaks to the present and how we’re identified or defined by the condition we’re born into, whether that’s a place with an industry that gets taken away from you or when something impossibly tragic happens to you and your family.
These divisions, as we begin to try to explain in the first episode and we unpick throughout the series, do still exist, those political divisions in these communities. It was a great honour to give voice to those different points of view as we go through the series and try to interrogate and understand some of those. We’re all talking about Leave and Remain at the moment [following the 2016 Brexit vote] but, 40 years ago, striking and non-striking was a huge division imposed on this part of the world, and it still feels very raw and very emotional for a lot of people today. I feel like drama and storytelling has a place at the table in trying to humanely and empathetically understand these very difficult things.

To that point, Sherwood is more than just a crime drama and was inspired by many different real-life stories.
Graham: Recently there was an inquiry in London around spy cops and undercover police officers who were placed into things like the Greenpeace movement, but actually there is a belief, and certainly the National Union of Mineworkers still believes, that undercover officers from the London Met were placed into communities in the 1980s to report back on essentially law-abiding, innocent people in the industrial movement.
We try to tell that story. There’s a mystery element in it – there’s an old spy cop living in the village and there is a question mark about who they are. I hope it’s also a human study of what it must be like to assume an identity, go to a different part of the world and live as someone else, spying on and arguably betraying the people you’re surrounded by.

Graham and director Lewis Arnold hoped Sherwood would tackle a subject that could attract an all-star cast and were delighted with the actors who assembled for the project.
Graham: You write something and you’ve got no idea whether anyone’s going to want to perform it. I’m constantly impressed by the social and political conscience of a lot of actors. I tried not to get starstruck, but sometimes I would leave set and think, ‘I can’t believe this array of talent is telling this story.’

Morrissey: There’s also not an actor in this country who wouldn’t want to be in a James Graham drama.

Froggatt: It was incredible. What an ensemble cast. It always comes down to being drawn to a fantastic script, and this isn’t just a fantastic script – it has so much more meaning to it in so many ways. Lewis Arnold just did such a fantastic job. When we filmed the wedding scene [in episode one], we were all sat off-set saying, ‘This is a good gang, isn’t it? This is great.’ I was just thrilled to be a part of it, part of this story, and also to be on this team.

Gill: With the ensemble we have, every day when you’re doing a scene, if it was with Jo or David or whoever it was, or Adeel in particular who plays my father, [it was amazing] watching all their work and getting to work with them as well.

Acting in the series was a balance between finding the truth of the character and perfecting the Nottinghamshire accent.
Morrissey: There are actors like Perry [Fitzpatrick] who are from there, so you talk to them. You do a lot of work on an accent as an actor. But in a way, there’s a point where you’re committing to the character and the truth of the character. I’ve seen great performances from people whose accents have not been great. You have to work hard at it. That’s where you put a lot of your work in, but when you walk on set, it’s slightly like an athlete training for a run. You do all that work hoping that when the gun goes off, you can just trust it. You have to do as much as possible and not let that accent get in the way of the truth you’re telling.

Filming during the Covid-19 pandemic posed many challenges, with locations secured across Nottinghamshire and north-west England.
Graham: As a writer, I’d never previously had to be on call every morning in case three of the cast members don’t turn up and you have to rewrite a scene because someone is off set that day. It was a huge stress for the actors to never quite know on a day-to-day basis what you’re going to be met with.
It wasn’t all Nottinghamshire. During the pandemic, we had to shoot in lots of different places so it’s a whole range in the North West. But so much of it is in Nottinghamshire. I was surprisingly moved to see all those shots of the community. That’s all filmed in Annesley, Newstead, Kirkby and Ashfield. Coming up, you’ve got highlights that include Newstead railway station, Newstead Abbey – there’s a whole episode almost entirely in Newstead Abbey. But we also filmed in Manchester, Bolton, Yorkshire, Nottinghamshire. It’s a mix.

The cast describe the series as heartfelt, complex, personal, political and funny.
Morrissey: I get sent lots of procedural things and what’s wonderful about this is it’s not that. It certainly is a thriller but it’s very relevant as well and very timely. You can walk away from this thinking, ‘Wow, this is a heavy piece of work,’ and it does have that element, but it’s also funny.

Graham: We have to communicate to an audience what the drama is and find those words, but I’m quite relaxed about it starting off as a crime drama in the first episode and then becoming an exploration of the police in the second and then a study of post-industrial history in the third and a state-of-the-nation piece in the fourth. That’s why I’m so grateful to the BBC for letting it be many different things and taking the audience on that journey.