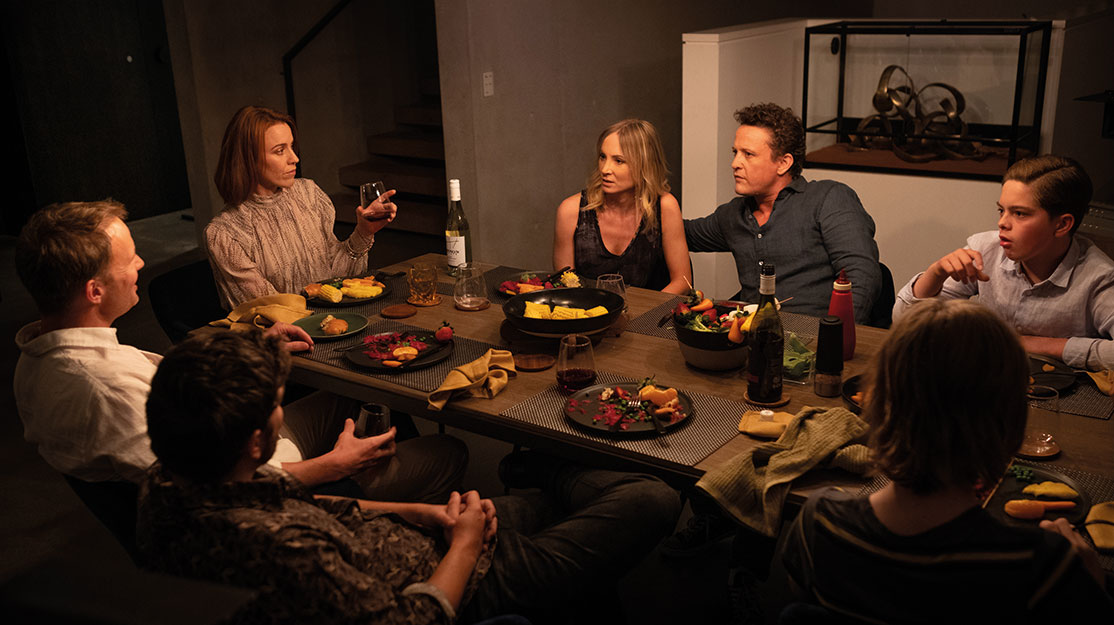 Playmaker Media’s The Commons portrays a world of the near future that grapples with the moral dilemmas thrown up by climate change and biotechnology advances. Don Groves finds out more from the show’s stars and creative team.

Screenwriter/showrunner Shelley Birse frets about the future of the planet and the prospect of millions of people being displaced by bushfires, cyclones, rising seas and years of drought.

That not-too-distant scenario is the setting for The Commons, an eight-part, character-driven thriller Birse has created for Australian streamer Stan, produced by Sony-owned Playmaker Media. For the series, Birse has overlayed the themes of global warming and environmental damage with her concerns about biotechnology and fertility procedures.

Downton Abbey’s Joanne Froggatt stars as Eadie Boulay, a gifted neuropsychologist who spends her days putting broken people back together. Desperate for a child, she considers using a radical IVF technique despite the misgivings of her husband Lloyd (David Lyons), a vector biologist. After pioneering a treatment that enables patients to rid themselves of traumatic memories or strong fears, Eadie volunteers to do national service to help the residents of the resettlement centre, where people are assessed on a points system. Those who pass are admitted to the city; the others are banished.

The set-up director Jeffrey Walker (Lambs of God, Riot), who directed four episodes, had long wanted to work with Birse and Playmaker Media. “The scripts were really beautiful and Shelley had created a really wonderful, intriguing world that spoke to me. I was also excited by the fact we could attract a great level of talent in front of the camera,” he says. “It combines the intimate and the epic. At its core, it’s about the relationships between these characters and their journeys, with the highest possible stakes.”

Jennifer Leacey (The Secrets She Keeps, The Wrong Girl) and Rowan Woods (Rake, The Kettering Incident) each directed two further episodes. The producer is Diane Haddon, whose credits include Reckoning, Friday on My Mind, The Code and Hiding, all for Playmaker Media. Birse penned four episodes, Michael Miller (Mustangs FC, Cleverman) wrote two and Matt Ford (House Husbands, Hiding) and Matt Cameron (Secret City, Jack Irish) each did one.

Birse came up with the concept after she finished The Code, the political thriller she created, produced by Playmaker Media, which ran for two seasons on pubcaster the ABC. Federal agency Screen Australia gave the prodco an Enterprise People grant, which enabled her to spend a year developing projects.

As part of that initiative in 2017, she was mentored by US-based writer Graham Yost (creator of FX’s Justified and The Americans) and producer/writer Fred Golan (Sneaky Pete, Justified). Yost and Golan had worked on a US remake of The Code with Birse’s help and wrote a pilot produced by Sony Pictures Television (SPT) for Fox, which did not proceed.

Playmaker Media and Screen Australia encouraged Birse to come up with an Australian drama that would have international resonance and she pitched The Commons. The concept was inspired partly by her experience living in a small community on the remote New South Wales mid-north coast, an area regularly affected by flooding and power outages. “I hooked on the idea that it is a weird time to be alive when we face existential threats from climate change and from technology,” she says. “I promised it would be a very human take on some big issues and, in times of crisis, that can bring out the very best of people.”

Playmaker co-founders David Maher and David Taylor put the deal together with Stan and SPT, co-financed by Screen Australia, state agency Create NSW and the 20% TV producer offset. “It’s our most ambitious drama to date, both creatively and budget-wise,” Maher says. “Set in Sydney a few years in the future, it’s a world of super storms, the increased displacement of climate refugees, brownouts, gated, air-conditioned communities, privacy–infringing IT monitoring, advances in neuroscience and eugenics, and computers that are smarter than we are. It’s a grounded series that does not stray into sci-fi fantasy; it’s a hand-reach from where we are now.

“Amid this degree of foreboding, we are trying to inject some hope and balance on the way we live with the way the world is going. As Shelley likes to say, we’re all boomers or doomers. Before the Titanic goes down, she asks, ‘Are you preparing for the flood?’”

Stan was Playmaker’s first choice after the Nine Entertainment-owned streamer commissioned Bloom, which premiered in January 2019. The supernatural romance-mystery-horror created by Glen Dolman, which starred Bryan Brown, Jacki Weaver, Ryan Corr and Phoebe Tonkin, performed so strongly that Stan ordered a second season, which is now in production.

“It’s unlike anything else that has come out of Australia,” says Nick Forward, Stan’s chief content officer, who gave The Commons the greenlight after reading an outline and the scripts for the first two episodes. “As it’s set in Sydney, it has an Australian feel but is global in its ambition. It has sci-fi elements but is a very personal and emotional drama. The themes it deals with are very universal.”

Last autumn, Birse spent three weeks in LA with Yost and Golan fleshing out ideas for each episode. A big fan of Birse, Yost says: “Her characters are so real and humane and funny and doing the best they can and not always succeeding. I love these characters and want to see what happens to them. I think it will appeal to some of the people who watch The Handmaid’s Tale and Netflix’s When They See Us.”

It’s the first Australian-filmed project for the LA-based Lyons since he appeared alongside Cate Blanchett, Robert Redford and Topher Grace in James Vanderbilt’s 2015 movie Truth. “I had been a fan of Shelley since The Code,” says Lyons, whose credits include the Netflix series Seven Seconds, NBC’s Game of Silence, Revolution and The Cape.

“At the heart of the show is my character’s relationship with Eadie in a terrifying world that is, as Shelley says, a ‘wince into the future.’ Jo Froggatt is such an immaculate actress, matched by her willingness to give on all fronts. She is the perfect number one on the call sheet because she dictates the state of play. I’m hoping The Commons will have a few years in it; I will come back in a heartbeat.”

Lyons relished the opportunity to work with the series’ directors for the first time. He was especially impressed when he saw Leacey had tears in her eyes as she watched a close-up of Froggatt on a monitor during an emotional scene with him. He also marvelled at Leacey’s habit of giving notes in a whisper to each actor, which he says ensured each gave a fresh take, not knowing what to expect.

One of Australia’s most in-demand actors, Corr was attracted to playing a cynical and obnoxious scientist who doesn’t much care for people but is determined to come up with ways to save humanity. “This was uncharted territory for me,” says the actor, whose credits include Bloom, Lingo Pictures’ upcoming Network 10 drama The Secrets She Keeps and Matchbox Pictures’ SBS miniseries Hungry Ghosts. “It’s the first series, particularly, out of this country that tackles subjects like climate change, refugees and immigration policies. The title refers to the commonalities we all need to survive like food, shelter, water and love.”

Corr was aware of Lyons’ work but was blown away by his performance, observing: “He is maybe the greatest actor I’ve ever worked with. That came out of left field. He’s such an intellectual performer and clever dude; he’s willing to challenge you to go in a different direction.”

Playmaker Media’s Maher first flagged the project to veteran production designer Tim Ferrier (Reckoning, Bite Club, Friday on My Mind) 18 months ago, before it was financed. “I got very excited about it from the conception,” Ferrier says. “I love the scripts, which are so dense and layered. It’s so nice to work on something with this quality of writing; the standard of writing in Australia is not always amazing.”

Ferrier enjoyed helping create the world Birse imagined, including a ‘Green Cathedral,’ which is a respite centre for trauma victims; an underground laboratory where Lloyd and Shay are developing a solution for the virus; and Dom Boulay’s high-tech apartment in a gated community.

In a rapidly changing world, socially, politically and environmentally, the key question is this: will Ferrier’s creations remain a figment of his and Birse’s imagination, or will The Commons prove to be a dark foreboding of times to come?