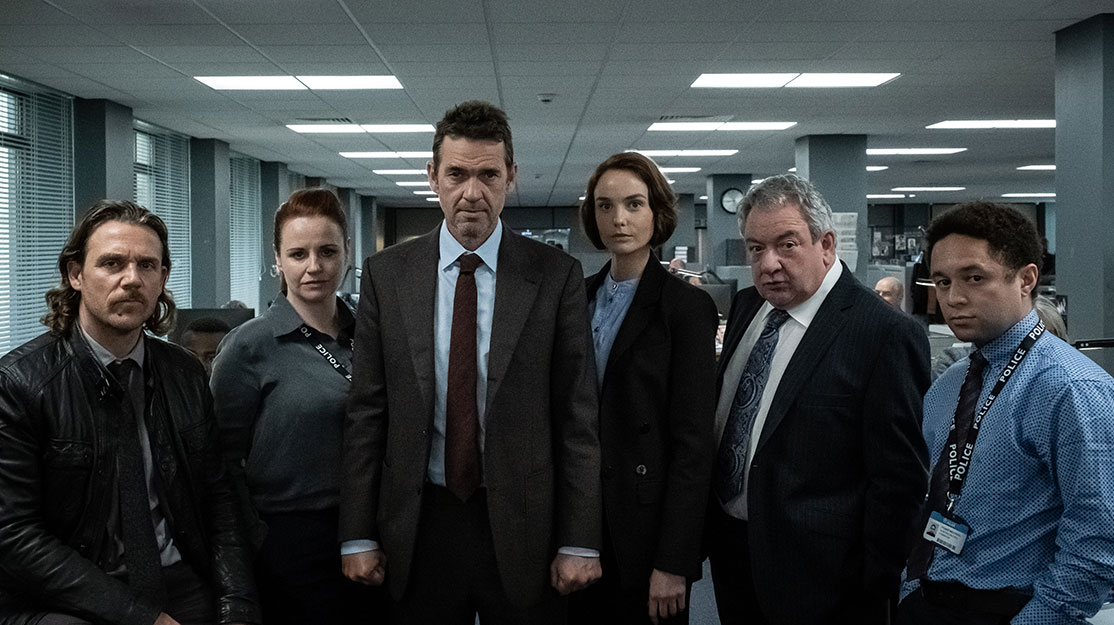 Trainspotting author Irvine Welsh lands on television with a series based on his 2008 novel Crime. The creative team behind the show discuss making this police drama about a complex, conflicted detective on the hunt for a serial killer.

Ever since Trainspotting first burst on to cinema screens in 1996 to the sound of Iggy Pop’s Lust for Life, the film based on Irvine Welsh’s novel of the same name has become an iconic piece of British cinema.

Welsh has now made the jump to television by turning his 2008 novel Crime into a six-part drama for UK streamer BritBox. The bold, brash and energetic series takes viewers into the mind of Detective Inspector Ray Lennox, a man who has “stared evil in the face” and is struggling to cope with past horrors while dealing with the tragedies he faces in his job investigating serious crimes.

Lennox first appeared in Welsh’s novel Filth, and in Crime he spends most of the story in Miami in the wake of a child murder case in Edinburgh, which is only revealed in fleeting fragments. The series, titled Irvine Welsh’s Crime, now focuses on that case as Lennox (played by Dougray Scott) and his partner DS Amanda Drummond (Joanna Vanderham) search for a missing schoolgirl. But Lennox is still haunted by a previous investigation, that of a serial killer known as Mister Confectioner, a “cold-blooded monster” who may have returned.

“To me, he was always an interesting character in Filth because he was quite secretive,” Welsh says of Lennox. “He always seemed to have more to him, but I wanted to explore this very difficult area of sex abuse survivors. He seemed to be the person for the job. He’s more of an avenging angel than a cop, someone taking the war to sex offenders and driven to hunt down the most heinous criminal offenders.”

Lennox is immediately drawn as a complex, conflicted officer who is determinedly and stubbornly single-minded, yet he is clouded by past experiences and crimes he cannot let go.

“He’s a very forward-thinking and intelligent, all-encompassing modern man, but he’s from the past as much as he wants to be in the future,” says Scott (Mission: Impossible 2), who read books about serial killers and spoke to real police officers in preparation for the role. “Since he was a child, he’s been haunted by the things that happened to him back then. That’s why he became a police officer, because of the things that happened to him as a child and his obsession with catching these kinds of people.

“Throughout the course of the story, the search for this serial killer crushes him bit by bit. There’s a redemption of some description at the end, but he’s so raw and flawed and a man of contradictions on so many levels that you’re never quite sure, which is a great reflection of people in real life. We’re all full of contradictions, and that’s Lennox in a nutshell. He’s fighting for his emotional life in many respects. He’s a fascinating character to play.”

Crime is a passion project for Scott, who had long wanted to work with Welsh. They first spoke at an event hosted by Hibernian Football Club, the Edinburgh team they both support, and Scott later flew to Dublin to meet the writer and “kick around some ideas.” It was then that Welsh suggested the actor read Crime.

“I was just enraptured by it,” says Scott, who is also an executive producer on the show. “It really captivated me in a similar way that Trainspotting did. It’s a very emotional novel and I just thought, ‘I’ve got to tell this story,’ so that started off the quest to get Crime made into a TV drama.”

In the early days, Crime was set to be a more traditional adaptation of the novel, which would have been “a much more difficult task,” Wood says, “particularly then because you’re shooting in Florida and in Edinburgh. It’s a much more expensive show. We wrote a script and we pitched it to lots of places and came very close, but it didn’t happen. Eventually, we just drew breath and decided to pull it in and focus on this side of the Atlantic [in Scotland] and those characters.”

“When we switched from Miami to Edinburgh to get the thing made, basically, we had the outlines of what happened to everybody and we had a lot of the character stuff, but it gave us so much leeway,” Welsh says. “It gave us so much more space to be creative because the whole thing wasn’t all mapped out. It was a hybrid between an adaptation and an original teleplay, so it gave us the chance to go for it a bit more.”

To that effect, Scott describes the series as a prequel to the novel. “It’s really hard to adapt your own novel because it’s very hard to be objective, and Tony in particular was brilliant at acknowledging the greatness of Irvine’s writing ability but also pushing him to do something that perhaps he hadn’t thought about,” the actor says.

“That was a learning curve for me as well, because I’ve produced stuff before but never really with this level of involvement. We all had notes, we all had ideas. We all had stories we thought we should follow. But the way Irvine expanded those characters’ backstories, particularly Lennox, I just thought was wonderful.”

Welsh says the series is a “very dark, existential thriller about the nature of human beings,” one which tackles toxic masculinity, workplace culture and the breaking up of traditional roles, all hidden beneath the facade of a police procedural.

“It’s about finding this killer, but also it’s not,” says the writer, who describes Crime as a state-of-the-nation piece. “We’re using this illustration of this incredibly horrific, terrifying case as an illustrative thing to bring out the fear we’re all facing, from potential species extinction through pandemics and global warming and technological change to the concentration of power and wealth up to the very highest echelons of society. There’s the idea we’re all on this kind of treadmill that we can’t get off. We’re trying to throw all these things into the mix, and also addiction and the way we tether ourselves to these strange behaviours that aren’t really going to help us.”

The show’s language and tone and Lennox’s emotional complexity also help the series stand apart from other cop dramas. Fellow EP and Buccaneer joint-CEO Richard Tulk-Hart says the fact the series was commissioned by BritBox, and will sit behind a paywall, gave the production team more freedom to push boundaries and avoid watering down the uncompromising central character.

“That’s really what’s allowed this series to stand out as a completely different show,” he says. “It’s partly Dougray’s performance, which he’s able to do with the language of Irvine, which then seeds the whole series and everybody else’s performances. As a company, we are creative-led and always will be. Doing this for BritBox, it did allow for a lot more freedom.”

Filming took place on location in Edinburgh and Glasgow this spring, and the series juxtaposes historic buildings and landmarks such as Edinburgh Castle and Arthur’s Seat with more modern buildings and council estates.

“The whole show was hilarious, dark, tough and challenging to make,” Strong says. “Lennox is deeply flawed. He’s a man on the edge, dealing with real demons and real monsters in both himself and the [criminals]. It was a chance to do something quite dark and near the knuckle.

“You realise he’s good person by the end, but you’re not sure. He’s a drug addict. He’s a liar. He doesn’t do it by the book. With all Irvine’s characters, there are no clear good guys or bad guys. It’s a lot more nuanced than that. It’s a lot more difficult in terms of who you’re rooting for and who’s innocent and who’s guilty.”

In their initial discussions about the project, Wood and Strong spoke about how to avoid Crime – which debuts as a boxset tomorrow – turning into a ‘Trainspotting Lite,’ considering the involvement of Welsh and its Edinburgh setting.

“It’s a double-edged sword, isn’t it? To be spoken of in the same breath as Trainspotting is an honour,” Wood says. “That said, it’s a very long shadow. But this isn’t Trainspotting. It’s an intensely emotional character piece. It required a different rhythm and different pace. I would never diss Trainspotting but he’s made it, it’s there. Ours is different. It’s as simple as that.”

Strong brought pace and energy to the series by using handheld cameras to inject a documentary style to the show, while natural movement is created by the numerous walk-and-talks between characters.

“The references we looked at were independent American cinema of the 1970s and early 80s, so it has that raw feel,” Strong continues. “We shot in a lot of places and we didn’t do a lot of production design. We walked into real locations and real communities and started shooting. I wanted to bring in a very realistic aesthetic. You’re following Lennox on this journey, so there’s movement and a propulsion to the camera. Then you can stop every now and again and get those beautiful landscapes and bits of the city and little interstitials. It’s always grounded, real and, hopefully, looks super cool.”

Filmed during lockdown in Scotland, the biggest challenge facing the production team was the scarcity – and cost – of interior locations, as well as the price of maintaining a Covid-safe environment for cast and crew.

“But by and large, I don’t feel the show we’ve delivered is anything but the show I wanted it to be,” says Wood. “It was a really interesting experience producing in Scotland because there was this realisation of what Irving’s writing and his voice meant to the crew.

“Then because of the Covid situation, I got the show I wanted because loads of people just worked their socks off. The location department had one hand tied behind their back and, in terms of costumes and designers, they would have walked through fire for this because it had a voice that was properly meaningful.”

For Scott, who is in almost every scene, Crime stands up as an example of television telling Scottish stories, rather than simply being a show that happens to have been filmed there.

“I’ve worked all over the world and done lots of different characters. But for me, I want to focus on telling Scottish stories,” he says. “I’ll go off and do other things, but I’m from this country and I have a lot of experience here. My literary knowledge of my country is pretty wide and we have some pretty damn extraordinary story writers, poets, actors, producers. I want to be involved in that.”

Scott will have his chance to do so, having now partnered with Wood and Tulk-Hart to create Buccaneer Scotland, while the production company is also developing Welsh novels The Sex Lives of Siamese Twins and The Blade Artist for television. The latter will see Robert Carlyle reprise his Trainspotting role as Frank Begbie.

There’s also the potential for a second season of Crime, picking up the novel’s central story in Miami. “I’d love to do it, and if that doesn’t prove to be possible, I have another book coming out next August that is another Lennox novel,” the author says.

“It’s a whole different case and there’s enough stuff in there you could use for a season two. I have another one I’ve finished that I’ll bring out the year after, which is more of a resolution thing about him and his relationship with the guys who sexually abused him. There’s a lot of material there to use for future shows.”