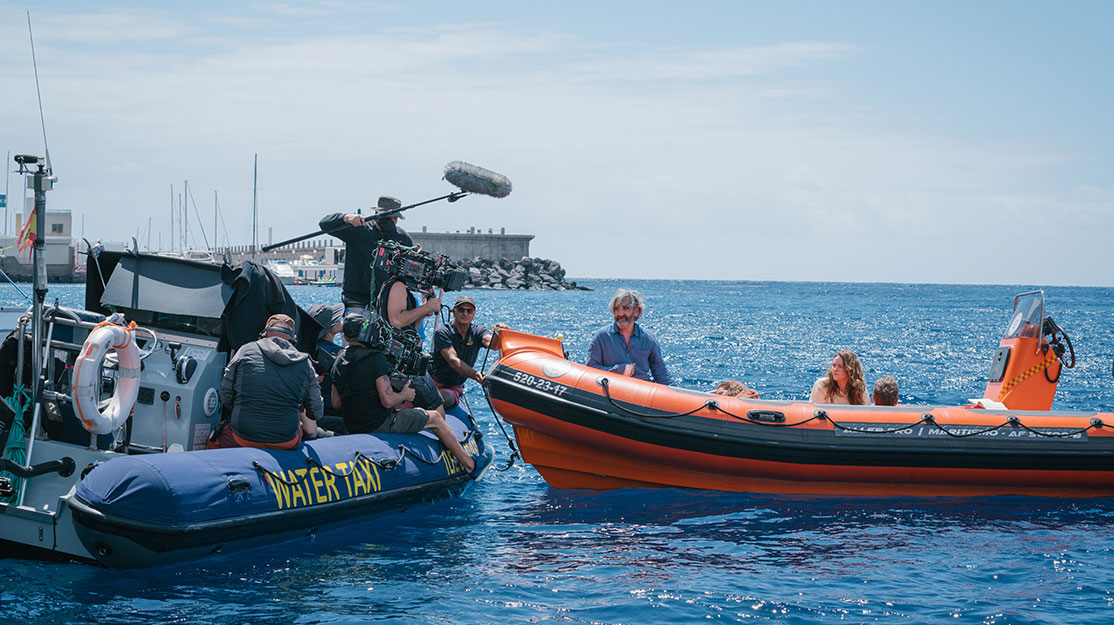 Coming to a Head

DQ tests out its sea legs on the set of the second season of survival thriller The Head, where the cast and crew tease details of a new story set on a cargo ship. Irene Jimenez reports.

Thank you. Gracias. Merci. Arigato. On the set of season two of The Head, multiple languages can be heard as actors from 10 different nationalities assemble to film six new episodes of the survival thriller.

Luckily for everyone, English is the common language on this international series from Spanish prodco and distributor The Mediapro Studio. For S2 of the show, again produced in collaboration with Hulu Japan, the setting moves from the Polaris VI Antarctic Research Station of the first season to the Alexandria, a scientific vessel located in the middle of the Pacific Ocean, which has a crucial role in the fight against climate change.

On board the ship, scientists and crew come together in a suffocating atmosphere – and then the discovery of a decapitated head appears sets S2’s central mystery murder into motion.

“The Head is the franchise of The Mediapro Studio. This series represents the essence of our strategy, based on creating international IP, keeping the rights, taking risks and forging alliances all over the world,” says Laura Fernández Espeso, CEO of the company.

Hulu Japan, HBO Asia and Latin America, Canal+ in France, StarzPlay in the UK and Germany, SBS in Australia, Prime Video in Italy and the Netherlands, Globoplay in Brazil and Viaplay in the Nordics are among 90-plus buyers of what was originally conceived as a limited series.

“After the huge success in sales, we and our partners wanted more, but we needed to find a good story, as all the questions in the first season had been answered,” Fernández Espeso adds. The solution came from Mariano Baselga, international development executive at The Mediapro Studio, who had the idea to set the action in the middle of the sea.

“It’s dark, with the sound of heavy rain. We are at Point Nemo in the South Pacific Ocean, the most remote place on Earth, 1,681 miles away from land. Thunder and giant waves shake the boat. We are on board a huge container ship, the Alexandria,” says executive producer Ran Tellem, director of international content development at The Mediapro Studio. “That is what Mariano Baselga wrote and, immediately, I said to myself, ‘OK, great idea, but how the fuck are we going to do this, my friend? Because we need a ship and we need an ocean.’”

That became one of the major challenges for the production team, who eventually found a 150-metre long, 22-metre wide cargo ship they could use for the show following a five month search. They moved it from Cádiz to Tenerife, in order to benefit from the tax incentives offered by the Spanish Canary Islands, replicating the funding model used on The Head’s first season.

By then, both the writers – Tellem, Mariano Baselga, Jordi Galcerán, Isaac Sastre and Cauê Laratta – and returning Spanish director Jorge Dorado were already working on the Agatha Christie-influenced script and were in touch with the main actors, John Lynch and Katharine O’Donnelly, the only survivors from season one and the common thread between all episodes. “There is a lot to tell about these two,” says Dorado.

The Head S2 is still a survival thriller set in an isolated and inaccessible place, with no police reaching the crime scene, but “it is bigger, darker, with more action, more danger, more drama, it is scarier,” says Lynch, who plays Arthur Wilde, leader of the scientific mission.

O’Donnelly, who plays Doctor Maggie Mitchell, continues: “The characters are more complex and I think every one of us is giving our most on set. This series is a nice collage of performances, and the fact we all are shooting away from home has made us connect more.

“We will get to know Maggie better in season two. She is a feral woman and we will find out more about her obsession with Arthur. This season has plenty of plot twists and no flashbacks, so it’s different from the first.”

Returning to the series that gave O’Donnelly her first leading role, she adds: “It’s great to work again with Jorge Dorado. I am more mature now and I am facing Maggie from a new position.”

“This is a huge challenge for me because English is not my mother tongue and because the series went viral in Japan thanks to actor Tomohisa Yamashita [who featured in the first season]. He set the bar high,” says Fukushi, whose computer expert character is the only who can contact the outside world.

The production team spent three weeks shooting inside the ship. “I still can remember the deafening noise, the smells, the 33°C temperature, the high, unbearable humidity of the engine room… but it was worth it because the script is amazing, mind-blowing,” says Arce.

Set to debut next year, The Head S2 has required physical effort from everyone involved, not least Hovik Keuchkerian, who had to gain over 45kg to play two brothers who are members of the boat’s crew.

All of the actors agree that filming on a real ship has helped them embrace their characters. For Dorado, three days shooting in the open sea for a sequence that unfolds in a lifeboat was a particularly unforgettable experience: “We spent 11 hours per day there, from sunrise until sunset, so logistics were complex. Every time somebody had to go to the bathroom, we had to come back to the coast by Zodiac [an inflatable boat].”

Dorado, who prefers not to rely on VFX and instead likes to capture as much as possible on camera, made use of subaquatic cameras, a drone, an assistant unit and “a lot of pills to prevent sea sickness” during filming. David Acereto, who has previously worked on Movistar’s The Pier and Netflix’s Sky Rojo and Feria, also returns to The Head as director of photography.

Meanwhile, on dry land, a team of artists built replicas of the cabins, stairs and corridors of the original vessel in a 1,200 square-metre studio in Madrid, with hard cardboard painted white to look like the metal of a real ship. “You can talk about the personality of every character through their rooms. For example, one of them is Catholic, so we included a cross hanging on the wall. Another one is messy, so the bed is undone. You can see science books, snacks, pictures of families,” explains Tellem. “The signs on a boat are in English and in the language where it was built, so we kept the Brazilian signs on the cargo ship we rented for the shoot,”

In addition, the laboratory where Arthur Wilde works was built to full scale, including a 280cm-wide fish tank. “The researchers keep the precious algae they find and analyse there. The laboratory is surrounded by plastic panels to transmit the sensation of asepsis that it’s supposed to have. We have also played with different coloured lights to emphasise the laboratory scenes,” Tellem adds.

Despite a set appearing to be a safer place to film than a ship, Lynch had an accident during the shoot in Madrid and needed three stitches in his eyelid. “I just fell badly and hit my eye. I promise it wasn’t on purpose,” says the actor, whose character was accused of a series of murders he did not commit in S1. To make things even more interesting in S2, Arthur will have to deal with his neglected daughter, played by Morris, who is also on board the Alexandria.

“He suffered a big injustice and spent one year in prison. These two facts combined broke him, and he reassembled himself not very successfully… he is wilder, less contained,” says Lynch.