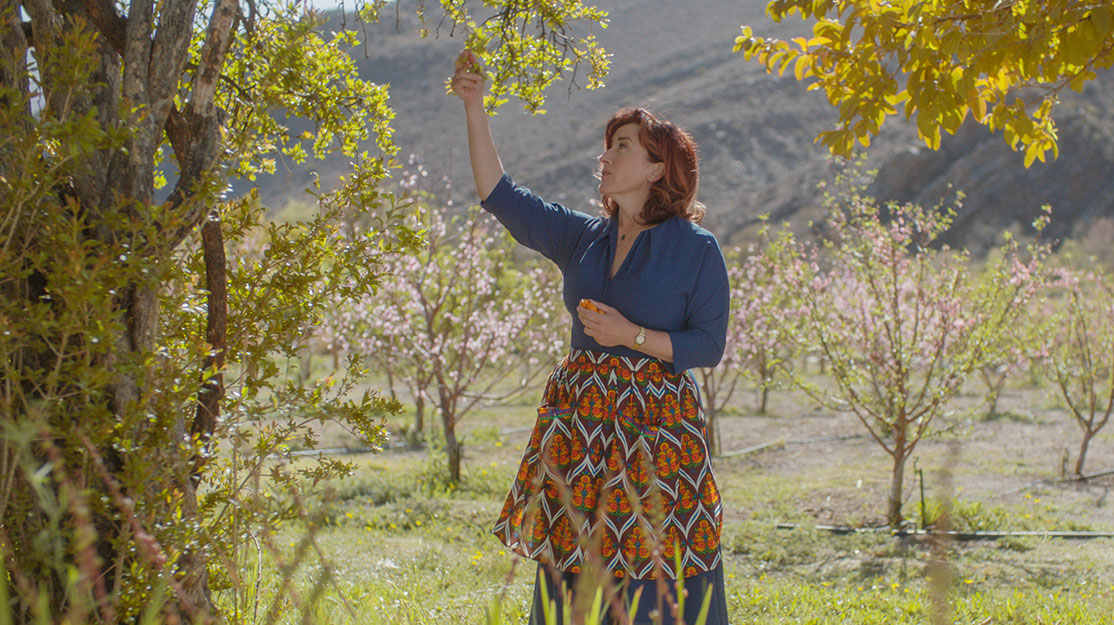 Come die with me

When she came across a pilot script for Recipes for Love & Murder, actor Maria Doyle Kennedy found it had all the right ingredients for her next project.

The Irish star is best known for roles in The Tudors, Orphan Black, Downton Abbey and Kin. But she now takes the lead in this South African-produced series based on the Tannie Maria mystery novels by Sally Andrew.

Maria is the loveable recipe writer for her local paper, The Gazette, who takes up a new role as resident agony aunt. When a women who wrote to Maria about her abusive husband is found dead, she joins forces with rookie journalist Jessie (Kylie Fisher) to solve the murder and catch a killer.

“Tannie Maria is Scottish, but I had worked with one of the producers on a show where I was playing a Scottish character, so she thought of me. I was kind of the right age and shape for the person, and I just loved it,” Kennedy tells DQ. “I was sent a breakdown first, a very colourful pitch document, and the character seemed so lovely, so eccentric. The way she looked at the world I just thought was so interesting.”

She then requested further scripts and found the series completely different from other roles she was being offered. “So much of what I was reading was violent – full of torture, serial killers and the terrible ways they wanted to do away with women. I was so tired of it, and this was really like a little jewel in the middle of these other scripts,” she continues. “It was immediately so tender and really based around this interesting warm person and the whole idea of a community. I was so attracted to wanting to be part of that, I thought it would be joyful.”

Maria, the actor says, “is a little bit bonkers – but in a really good way.” Living on her own in the fictional Karoo town of Eden, she is an amazing cook who is very involved in her local community but keeps herself at arms length from people, making it difficult to build close relationships.

As viewers will discover, this is all because of secrets from her past and an unpleasant situation that she was involved in.

“She represses her own feelings and her feelings of intimacy because she feels that keeps her safe, and through the series that unravels a little bit through some of the events that happen,” Kennedy explains. “She forms a very strong bond with the other women she’s working with, and they become this really fearsome trio: Hattie, Jessie and Tannie Maria, who work in the office at the back of the butchers.

“It also looks so gorgeous. As I’m talking about it in my mind, I’m just reminded of how much I loved it. Actually, I painted my own front room pink because I missed the Gazette offices so much. I was just like, ‘I need more pink in my life.’”

Through her new agony aunt role (Tannie translates as aunt in Afrikaans), Maria and her team will be called upon to solve numerous mysteries, while the murder plot arcs across the season.

Kennedy compares Recipes for Love & Murder to the clever and provocative plots invented by Agatha Christie, though Maria stands apart as an unusual kind of sleuth by looking for clues in unusual places, not least people’s shopping baskets.

“It’s really funny, but within each episode, there’s also a smaller story that resolves each time,” she says. “We would hope that you would be satisfied by the resolving of the smaller mysteries, but also compelled enough by the bigger problem that they’re trying to solve that you’ll want to come back and watch it again.”

Both Worlds CEO and series producer Thierry Cassuto partnered with Blake Friedmann Literary Agency to bring the series to screen, after he read the book one Christmas and thought it could meet his ambition to turn a South African novel into a television drama with international appeal.

Cassuto and Jeynes then developed the series together over a year before pitching the project to M-Net, where the series debuted in March. It will also roll out on Acorn TV in the US, Canada, Ireland, the UK, Australia and New Zealand later this year.

With four books now written by Andrew in the Tannie Maria series, Casutto was focused on remaining true to the character readers have grown to love, as well as the world the stories are set in. Filming took place over 62 days in Prince Albert, a town at the foot of a mountain range called the Swartberg Pass, with additional shots captured in Scotland.

“As you see the town, you think, ‘Wow, what a picture-perfect place,’ and then this mountain above it indicates there is more to the place than just these perfect houses, straight avenues and beautiful trees,” he says. “We wanted to stay true to that world, which has a bit of magical realism in a way because it all seems like, ‘Wow, this town feels too perfect to be true.’ You open a cupboard and then down come the skeletons. There’s secrets in that town that Maria, Hattie and Jessie will uncover.”

Some additional back story has also been added to Maria’s character beyond what happens in the books – an element Cassuto describes as Maria’s secret – which he says gives the producers some room to continue the story if additional seasons are commissioned.

“That also added a bit more drama because the show goes from comedy to drama, and from chuckles to gasps quite quickly,” he says. “We don’t shy away from that. We believe we can cross over the genres and that viewers will follow us as we go from food to domestic violence, from a couple that needs some magic in their lives to a woman being in real trouble, her life being threatened and the worst happening.

As an actor, Kennedy jokes that she’s “not method,” but was completely off-book for all 10 scripts by the time filming began.

“I knew it was going to be really busy and I was going to have to think about the food a lot,” she says. “She processes information slightly differently so I had to think about that and not just react as I would of myself involuntarily. But once I had all the words in my mind, they just kept swirling around and I felt like I was thinking like her somehow.

“The devastating thing for my family,” she jokes, “was they really hoped the one thing that was going to come out of it was really good food. I just worked so much, I barely boiled an egg for three months so on my day off I’d just be like, ‘Can we just go out for dinner?’”

Kennedy has also been at the forefront of the boom in Irish drama in recent years, notably starring in 2021 gangland drama Kin and before that legal drama Striking Out. She points to the growth in international productions that have fueled bigger budgets and higher production values, which have meant Irish stories have been able to travel the world.

Following in the footsteps of Scandinavian and Welsh drama, she now predicts Ireland could be the latest country to make a splash with dual-language programming.

“Our language, Gaelige, is a beautiful language and that’s going to be one of the next things that somebody outside comes to help make,” she says. “This not just made for Irish viewers, it’s made in a way that Borgen or The Bridge. That’s going to be the next interesting thing that comes out of Ireland.”

Until then, she says Recipes for Love & Murder will serve up an “absolutely scrumptious” treat for viewers, who will get to meet the eclectic members of a community while following Maria as she solves a number of mysteries.

“That’s kind of intoxicating in itself, isn’t it?,” she says. “You want to be the first one to solve it, you want to piece it together, and then you’re literally going to want to just go straight into your kitchen and make all the food that you’ve been watching. That’s a big part of it too.”