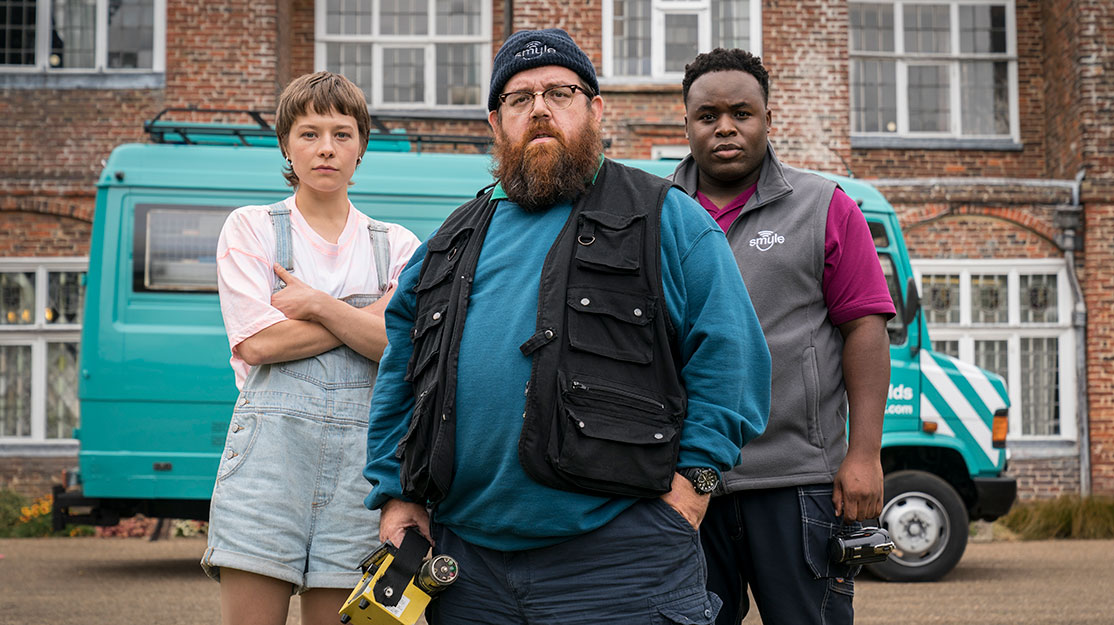 Simon Pegg and Nick Frost open up about the influences and ambitions behind their horror-comedy series Truth Seekers, in which a broadband engineer and amateur ghost hunter stumbles into a real-life haunting.

“There was great joy in pressing down when it was sodden with milk, then sucking the milk out in your mouth.”

“I like the little frosted ones – the big ones are okay, but they’re more nesting material.”

In the sort of hyper-specific, deadpan exchange that could have been lifted from their new series, Simon Pegg and Nick Frost are musing on the appeal of Shredded Wheat, just outside a derelict breakfast cereal factory in Welwyn Garden City, 20 miles north of London.

They are there to film the final episode of Truth Seekers, their eight-part horror comedy for Amazon Prime Video. The scenes are spoiler-heavy, but the atmosphere is charged as crowds of supporting artists mill around, ready for the grand finale, while Frost chats to director Jim Field Smith (Criminal). Spirits and tensions are equally high.

Frost plays Gus, a broadband engineer reluctantly partnered with novice engineer Elton (Samson Kayo), whom he ropes into his side project of paranormal investigations for his YouTube channel, alongside Elton’s sister and reclusive social-media whizz Helen (Susan Wokoma) and Gus’s cantankerous father-in-law Richard (Malcolm McDowell). Ghostly japes and genuine chills ensue as they drift out of their depth and into the orbit of charismatic academic Dr Peter Toynbee (Julian Barrett).

But events are constantly undercut by a sense of sadness, loneliness and grief: Gus’s quest is driven by the death of his wife (and Richard’s daughter) a decade ago, while Elton and Helen share their own buried family traumas. Pegg, who cameos as Gus’s cheerful, bewigged boss Dave, credits Frost’s “lovely sense of pathos” with anchoring the series, which sees the quartet form an awkward gang of ghost hunters.

“They’re all looking for something or running away from something,” Frost explains. “I’m glad it’s melancholy.”

They cite influences including Netflix’s Stranger Things for its ambition and humanity, Scooby Doo for the ghostbusting gang operating from an old bus, and The X-Files for the central relationship built on “opposing views and mutual respect.” The latter was watched by Pegg and Frost “over and over again” during their flat-sharing days in north London, while further inspiration was derived from their own failed supernatural adventures in the same era.

“This show came out of silly adventures we used to go on when we lived together,” says Pegg. “We went on various pseudo-scientific expeditions to abbeys or woods to look for scary stuff, even though we didn’t expect to see anything. We found a tube station in Highgate Wood, stumbling out onto the platform like it was Narnia. That was a good night! But we had zero supernatural encounters.”

The scares on Truth Seekers weren’t entirely manufactured, thanks to diligent location scouting turning up memorable sites including a deserted hospital, an underground bunker and an old Tudor house with a Georgian house built over the top of it. “That house was creepy and creaky and weird,” shudders Frost. “It was an environment to be afraid in – I was left in a room waiting and I didn’t like it, even though I knew it was just my mind.”

“Simon always says that being scared and being made to laugh are similar,” adds producer Richard Webb. “They’re involuntary rather than intellectual responses. We want to make things genuinely scary, then puncture it with jokes. If terrible things happen to a funny person, they’re still funny – Gus is a funny bloke and doesn’t lose his personality. The comedy comes out of the characters, and we’ve cast a lot of very funny people.”

Alongside the familiar comic performers and guest turns from the likes of Kevin Eldon, Morgana Robinson and Dustin Demri-Burns, McDowell is perhaps an incongruous presence, although Webb asserts that “he’s funnier than he thinks he is.” For his part, A Clockwork Orange star McDowell was delighted to return to the UK for his biggest British series since Our Friends in the North 24 years ago.

“Simon and Nick are unique,” he says. “I’d seen Shaun of the Dead and wanted to work with them. This is so strange and charming and different from anything I’d done before, and I loved this quirky old dad who was a combination of my dad and my uncle, the old buggers, but very funny with it. He and his son-in-law are emotional cripples, but then aren’t we all in many ways?”

Such a broad ensemble was crucial to the show’s success, with Pegg and Frost both taking care to differentiate it from the enduringly popular ‘Cornetto Trilogy’ of films they made with director Edgar Wright (Shaun of the Dead, Hot Fuzz and The World’s End)

“We didn’t want it just to be ‘Simon and Nick Go Ghosthunting,’ a TV version of the Cornettos,” says Pegg. “This is a more measured study on loneliness and fitting in and finding your people.”

Pegg’s enforced absences, owing to filming commitments on Mission: Impossible, meant his appearances were reduced to cameos, with Dave being “like the police commissioner giving out missions.”

They also made writing the series a challenge, as Frost explains. “We all wrote episode one between us with [co-writers] James Serafinowicz and Nat Saunders, then James, Nat and I divvied the others up, and we all wrote episode eight at the end. Initially, we shot ourselves in the foot by trying to be so ambitious.

“Our scripts were coming in at 50 pages, then we got emails from Amazon saying, ‘Wouldn’t it be great if each episode was 25 minutes?’ Plus we didn’t really have a clarity for how it would finish, and we got stuck for a while before we stripped out a massive part of it, which freed it up. But that’s what being a writer is about.”

Debuting this Friday on Amazon Prime, Truth Seekers is the first TV series from the pair’s production company, Stolen Picture, which they have led alongside late CEO Miles Ketley, who died earlier this month. Further seasons are planned but have yet to be confirmed. Much of the material stripped out of season one could yet return, and Pegg hopes to be able to play a larger role on screen.

“We’ve got an arc for seasons two and three,” Frost reveals. “We have to strike the balance between it being a bit parochial, with monsters of the week, and covering a massive global conspiracy they can fight against.

“We want it to be slightly bigger, the rabbit hole to go a bit deeper. They’re a gang of idiots who are nice people with a weird hobby, but there’s a Rapture bunker or a tortoise that can see the future. You can go back in time, erase everyone’s memories – you can do anything in this genre.”