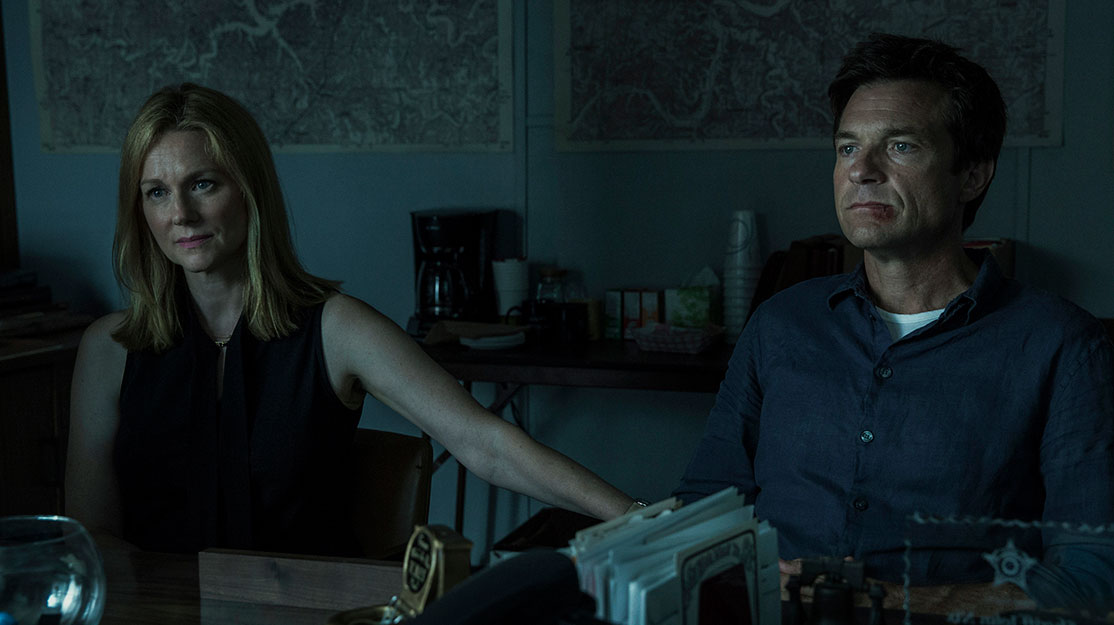 Jason Bateman has money troubles in Netflix original series Ozark, in which he stars as a big-city financial advisor forced to move to the country after upsetting a drug kingpin. But as DQ discovers, it was the opportunity to direct that drew him to the project.

Jason Bateman is best known for starring in movies such Juno and Horrible Bosses and as Michael Bluth in cult TV comedy hit Arrested Development.

But in his latest small-screen role, starring alongside Laura Linney in Netflix original drama Ozark, the opportunities behind the camera drew him to the project as much as those in front of it.

When US$8m goes missing, Del Rio dispenses with Bruce – but agrees to spare Marty after hearing his plan to recover the money and move his operation to the Ozarks, a mountainous region in the central US.

Marty quickly uproots his family – adulterous wife Wendy (Linney) and their two children, Charlotte (Sofia Hublitz) and Jonah (Skylar Gaertner) – and sets about finding a home in this lazy lake resort and a business through which to launder the cash.

“My agent called me, telling me he just read one of the best scripts he’d ever read,” Bateman recalls. “I [told him] I wasn’t really looking for a series, but he answered, ‘I know, but I can’t unread this thing.’ I read it and totally agreed with him, but told him, ‘The only way I’d ever consider doing this is if I could direct them all. It would break my heart to just be the actor in something like this and watch somebody else have all the fun, directing something as chewy as this thing.”

Due to time constraints, Bateman ended up prepping all 10 episodes and starring in each, though he only directed the first two and last two. Three other directors – Sackheim, Bernstein and Kuras – shared the remaining six.

The everyman character of Marty equally appealed to Bateman, who says he is always interested in playing the person most relatable to the audience.

“I like having the responsibility to process things for the audience and spit out, in words or in expression, how the audience could or should feel about what they’ve just seen or heard. And that was easy to do with this guy,” the star explains.

“What I found interesting to play, that’s in the writing, is that he’s forced into these situations that demand that he reach down deeper than he probably would have otherwise. So he’s churning up these brand new efforts of courage.”

When viewers first meet the Byrde family – the series launches on July 21 – they’re enjoying a comfortable life in Chicago, Bateman says, adding: “But you start to see some cracks in both of those worlds [of their family life and Marty’s work], and pretty quickly you see it cracked completely open. They have to react to that and try to navigate these dangers. And the answer takes the form of the Ozarks.”

But despite the sticky situations he finds himself in, Marty’s motivations are purely family-driven, says showrunner Mundy (Criminal Minds, Low Winter Sun), who points to the character’s 10-year-old Toyota Camry as evidence that he’s not in the money-laundering business just to splash the cash.

“It’s not about greed or excess, as it might be for his partner, Bruce,” he says. “It’s about security for his family. I think he liked the idea of, ‘Could I get away with this? Could I have a secret that is powerful and makes me feel better?’

“We didn’t want to get too caught up in the mechanics of money, but we did want to get caught up in the emotional desire for it: what motivates people for it – is it family? Greed? Is it escape? Is it a blessing or a curse? Everyone’s motivation is slightly different. And the more people we get to meet in that world, we found we wanted to go deeper into the other people and their families. We just keep digging into the humanity of the whole situation.”

Bateman’s co-star Linney shared his love of the script and, conveniently, a manager so they were able to talk it through after reading it.

“We just bonded talking about the script, and found an affinity for one another, just personally, that leant itself to the kind of chemistry you need when you’re asking the audience to invest in a couple that’s going through something complicated,” Bateman says of that first meeting. “That’s what you need when you’re asking the audience to experience a vicarious situation. You need to feel that these two people are kind of like you – that you would be doing the same things they’re doing. And if you don’t have somebody who can penetrate that kind of vulnerable, honest space in you like Laura does, it just won’t happen.”

Mundy describes Linney (The C Word) as “the most present and empathetic actor I’ve ever seen, just on the simplest level.” He continues: “She never looks down on the character she’s playing, even if they’re doing something bad. She makes you understand where they’re coming from, because she understands it, as well as the people she’s dealing with.”

In Wendy, Linney plays a character who took the opportunity to leave her small-town upbringing behind but is able to use that experience when she finds herself in the new surroundings of the Ozarks.

“I think, because of that, she’s a little bolder, more of a risk-taker than Marty, in a lot of ways, a way she’s always been,” Munday states, before revealing that as Wendy grows more distant from her husband, she finds comfort in Chicago attorney Gary Silverberg (played by Bruce Altman). “She wasn’t looking for it, but was happy to get attention when someone gave it to her, because she was feeling neglected. We didn’t want it to be someone with whom she just had this purely physical fling. We wanted someone who was a serious individual Wendy would be involved with. She needed an emotional connection that she wasn’t getting with Marty, more than a physical one.”

Mundy was first approached about the Netflix show in October 2015 by series producer Media Rights Capital but he was already working for the SVoD giant on fellow drama Bloodline, which ended following the release of its third season earlier this year.

Then in April last year, the team travelled to the Ozarks to see the area for themselves, knowing that this was where screenwriter Bill Dubuque wanted to set the series.

Episode one largely takes place in Chicago but the action quickly moves south – a decision inspired by the Dubuque’s own experience of owning a cabin on the Lake of the Ozarks for 25 years. The Blue Cat Lodge, which features in the show, was based on a restaurant/motel called The Alhana Resort, where Dubuque and his brother once worked.

“We went to everything they showed us, and then tried to go out as much as we could, just on our own, and talked to people in bars and restaurants and diners in the morning, just to get the lay of the land,” Mundy recalls of the trip, which was supported by the Missouri Film Commission. “It’s quite different when you finally walk the actual ground.”

In town, the writing team met local politicians, visited the remote Meth Mountain and chatted to workers at the local GQ strip club to uncover the local way of life, while Mundy kept a notebook of local phrases he would later weave into his scripts. One episode features the expression ‘FT’ – referring to the annual ‘Fuck the Tourists’ party held to celebrate the departure of tourists – while episode 10 includes the line, ‘Go home and get yourself a frozen custard,’ a nod to the area’s popular custard stands.

Researching money laundering was equally important, with an active FBI agent and a hedge fund manager both spending a day in the writers room to field questions about moving money, legal or otherwise.

With the writers working in Hollywood, filming took place on location in and around Atlanta, with producer Markey setting up shop in an office above the sound stages that housed Ozark’s standing sets at the Georgia city’s Eagle Rock Studios.

The majority of filming, however, took place 45 minutes north of the studios at two different lake locations – Lake Altoona and Lake Lanier – where the water itself could become a central character in the series. “And what’s nice about shooting there, as opposed to, say, a little north of the city in New York or in Vancouver, is that you can spin the camera 360 degrees and you still have some really great colour and grit to the aesthetic that’s perfect for the rural flavour we want,” Bateman says. “In those other places, your ‘pie wedge’ [of spin] might be smaller, so you can only shoot in one direction at a location. This was more natural.”

Along with their teams, pilot production designer Roshelle Berliner and series designer Derek Hill were then challenged with creating an authentic run-down look perfect for Ozark, with Mundy seeking to use lots of natural light to ensure it “felt real.”

The task involved creating lakeside resort The Blue Cat Lodge, which is run by a young woman called Rachel Garrison (Spiro) and soon becomes part of Marty’s laundering operation. The location chosen was a real-life closed-down restaurant called The Little River Sports Bar and Grill, on Lake Allatoona, with the production securing an extended lease on the premises and building cabins, a picnic area and pool for the series.

As viewers will discover, the arrival of the Byrde family changes the Ozarks, and the Ozarks changes the Byrdes, with the new surroundings pushing the family to their limits.

But when push comes to shove, adds Mundy, “they want to be together. There’s something that still holds them together. At their core, they’re still a family worth fighting for.”