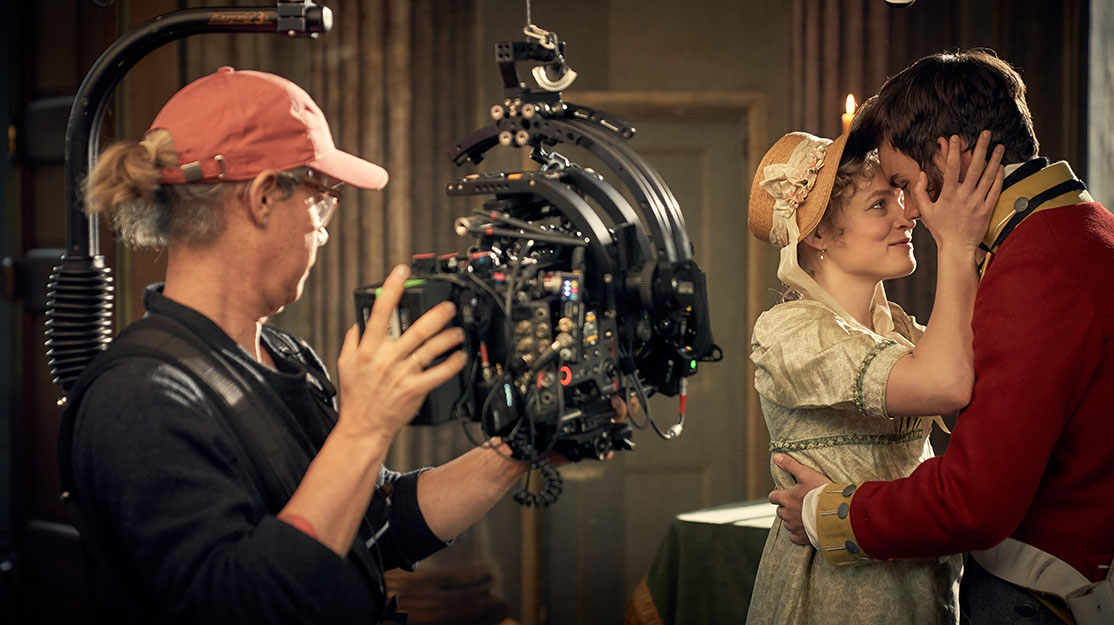 DQ travels back to the 19th century to the set of Belgravia, a six-part drama that sees families tested and secrets revealed, created and produced by the team behind Downton Abbey.

A stone’s throw from Dorney Lake, the home of the 2012 Olympic rowing event on the outskirts of Windsor, sits Dorney Court, one of England’s finest Tudor homes.

Dating back more than 500 years, it’s a great deal smaller than Highclere Castle, which doubled as Downton Abbey in the series of the same name. But it’s just as picturesque, which perhaps explains why it’s one of the settings used in Belgravia, the latest period drama from Downton creator Julian Fellowes.

Based on the novel by Fellowes, Belgravia is described as a story of secrets and scandals among the upper echelons of London society. It begins in 1815 with a class clash between the old money Brockenhursts and nouveau riche Trenchards. Edmund Bellasis, son of the Earl and Countess of Brockenhurst, had an affair and was possibly married to Sophia, daughter of James and Anne Trenchard. He dies in battle, before she discovers she is pregnant and then dies in childbirth.

Fast-forward to 1841 and their son, Charles Pope (Jack Bardoe), begins to cause a stir as the two families discover they have a grandson – and a potential heir who not everyone is delighted to meet. Other characters, such as John Bellasis and Oliver Trenchard, are keen to stand in Charles’s way.

On set, extras dressed in bonnets and top hats are preparing to film scenes from episode four outside the 12th century Church of St James the Less, its tower looming over Dorney Court. Proceedings are led by the uninterested and uninspiring Reverend Bellasis (Fleet), the younger brother of the Earl of Brockenhurst who spends most of his time gambling and losing the family’s money.

“He’s a very poor vicar; he’s a snob and he’s lazy,” Fleet jokes. “I feel so sorry for his poor wife [played by Diana Hardcastle], who is one of the tragic stories of the whole series. He’s not very nice at all. He gets worse, if anything. He abandons morality completely by episode six.”

Best known for comedic roles in 1994 film Four Weddings & a Funeral and TV sitcom The Vicar of Dibley, Fleet says the Belgravia script was a “page-turner,” comparing the story to something from Charles Dickens. “It’s like all the great stories – it’s the lost child, the two lovers denied. It’s got romance. Stephen has a difficult relationship with his brother – I’m very jealous of him and I can’t get my hands on the money. Because he’s the elder brother, he gets everything and I get nothing,” the actor says of his character.

Walter admits she wasn’t “yearning” to get back into a corset, having previously starred in period dramas The Spanish Princess, Downton Abbey and films such as The Young Victoria. But the chance to reunite with Fellowes, and the strength of the characters that populate Belgravia, meant she was drawn towards the series.

As Lady Caroline Brockenhurst, she plays a character suffering terrible grief that has brought her closer to her husband. But the discovery that she has a grandson also brings her together with Anne Trenchard, and their rivalry epitomises many of the themes of the series, including wealth, class and inequality.

“To a modern audience, it’s going to be very hard to perceive any difference between Tamsin’s character and mine,” Walter says, referring to their differing statuses. “The indications have got to come from the way we behave to one another, rather than in an obvious thing like she’s got a garish colour dress. Because Tamsin and I are getting along very well, I keep having to kick myself and remember to be snooty towards her, because we have an obvious companionship in many ways in the story.”

Walter says the story will be very recognisable to modern audiences. “They’re essentially in love, in hate, in desperation. They’re all human emotions busting out of all these restrictions.”

Meanwhile, if there is a villain of the piece, it might just be John Bellasis, a man who is out to protect his inheritance from a stranger who could be the true heir to the Brockenhurst estate. But things aren’t quite that simple, according to James, who plays the character.

“I’m often attracted to these characters because they’re sort of conflicted,” he says. “From his point of view, I understand fully his instinctive self-preservation. The life that he imagines he’s going to live is suddenly jeopardised quite dramatically, and he goes to all the lengths available to try to maintain his trajectory to his entitled future.

“Throughout the series, he begins to piece the the jigsaw together and work out exactly who this Charles Pope is. It’s a huge inheritance he’s set to lose.”

Love also confuses matters for John, as he is arranged to be married to Lady Maria Grey (Purnell) but has an affair with Susan Trenchard (Eve). “I don’t want to say that he’s ruthless and callous; he’s just a gentleman of a certain entitlement and was behaving in the way men of his class and education and upbringing would,” says James. “People also love a baddie, don’t they? He’s certainly the cad of the piece.”

While Belgravia will inevitably draw comparisons to Downton, producer Colin Wratten (Killing Eve) is keen to put clear water between the two series, which are set some 100 years apart.

“Julian writes about class, but here, for the first time, we have aristocracy and industrialists living side by side,” he says. “Unlike Downton, which has a precinct of the house and the family, we have different families. It’s a big ensemble of 65 cast members. As the story ebbs and flows, we go to all those different places, from Manchester and the cotton mills to London’s East End docks.”

Belgravia sees Fellowes reunite with Downton executive producer Gareth Neame, the executive chairman of production company Carnival Films (Jamestown, The Last Kingdom), which is producing the series for both ITV in the UK and US cable channel Epix, with NBCUniversal Global Distribution shopping the series overseas.

“He writes quite traditional romantic stories that have really not been fashionable for a long time,” Neame says of Oscar-winning screenwriter Fellowes. “I don’t think many other people are doing those, and what we found with Downton is that people around the world absolutely love those quite simple ‘will they/won’t they?’ stories. The more quintessentially English something is – British class, snobbism or the comedy of manners that he writes about – it really does travel and people understand it.

“Wherever human beings are, they have always organised themselves in hierarchical structures. So going into this, the Downtown movie and then doing [Fellowes and Neame’s forthcoming HBO show] The Gilded Age, we realised that a lot of the things that really interest him as a writer are much more commercial and more clearly understood by people than perhaps we would have imagined.

“The other thing about it is this is an adaptation but it’s an adaptation of a modern novel [set in the past]. A lot of adaptations are still made of novels of period, which are perhaps constricted by a plot that was laid down 250 years ago. But we have free rein to tell quite contemporary stories within a period setting.”

Fellowes had written all six scripts by the time pre-production started, giving the crew a generous head start before filming began last April. In addition to its huge cast, Belgravia features 107 different sets and was filmed across 75 shooting days over 15 weeks. Locations include the Bath Assembly Rooms, Edinburgh’s Royal Mile, Hampton Court, Chatham Royal Naval Docks and the Old Royal Naval College in Greenwich, as well as Somerset House in central London.

Production designer Donal Woods, whose credits include Cranford, Downton and Jamestown, immediately found he was not allowed to film in the real Belgravia, an area of London that is home to a dozen embassies and borders Buckingham Palace and Hyde Park. As such, the production team decided to recreate Belgravia through a mixture of set builds and other locations.

“We’ve recreated a lot of rooms – 107 location sets in 15 weeks [of prep], which is longer than they normally give you for a TV series,” he says. “We’ve got some sets at Twickenham Studios, but the search was really finding those locations, making it work within the schedule and still fitting the story, the characters and the period. We are moving around the country.

“This Georgian and early Victorian period was much sparer [than Downton]. There was less clutter and fewer ornaments. Rooms were simpler but still had a very stylish kind of interior decoration. We’re very lucky in this country that we still have beautiful country houses and rooms that are protected and still look the part.”

Similarly, costume designer James Keast (The House of Elliot, Mr Selfridge) had his work cut out, with the unenviable task of dressing 65 main cast members and more than 2,000 extras, who shared and reused around 900 outfits to ensure as much money as possible was available to spend on the principals.

“There’s at least 1,000 costumes across everybody. For the top 25 [characters], I’ve made as much as possible because, when you read the script, if it’s a specific scene, they need a specific costume that will fit in with what the set looks like. One of the interesting things is if it is a period production, you know we will be using a lot of houses like Dorney Court. So from the colours of those houses, you’ll know the tones and fabrics to use.

“The biggest challenge is that in real life, a lot of these characters wouldn’t have had a huge wardrobe. But in terms of TV and film, you have to see passage of time, you have to see it’s a different day, so you have to change people and find enough costumes for everybody.”

Another challenge is differentiating the locations enough so viewers can recognise what they are watching, instead of moving from one room with gilt frames to another. Director John Alexander and cinematographer Dale Elena McCready chose to shoot locations with varying styles to help that process.

“In the Brockenhurst house, we shoot that much wider and get more scale from that as opposed to the Trenchards,” Wratten says. “When you’re telling the story, you don’t want to get lost in where you are, or the costumes either. James and Donal are constantly making sure we don’t have someone going into a room or getting into a carriage with a costume that’s either going to clash terribly with the fabrics or the upholstery.”

Unlike the long-running Downton, Belgravia was conceived as a “finely plotted” limited series, with Neame echoing Wratten’s belief that it stands apart from his previous hits. “There are elements of Downton in it because it’s period and it’s Fellowes writing and the themes that interest him, but it’s very different,” he adds. “I don’t see why Downton fans wouldn’t like this, but I wouldn’t want to make too much of a claim that it’s another Downton. It isn’t, it is quite different.”