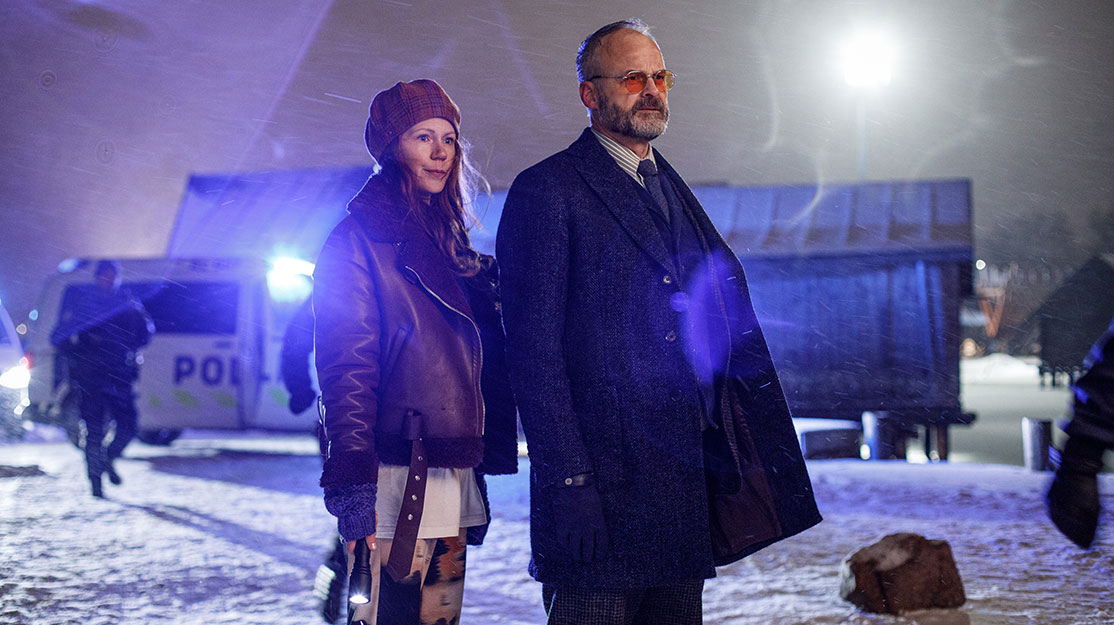 Actors Johan Rheborg and Hanna Alström reveal what attracted them to their starring roles in Agatha Christie’s Hjerson, a Swedish series that offers a fresh and unique take on the crime writer’s work.

Agatha Christie’s stories have been the source of countless adaptations on stage and screen around the world since the crime writer first published The Mysterious Affair at Styles, which introduced iconic detective Hercule Poirot, in 1920.

But nothing based on the Queen of Crime’s novels can compare to the latest production to be inspired by her work. Swedish drama Agatha Christie’s Hjerson is not only set within the author’s fictional universe, but is based entirely on a character created by one of Christie’s own fictional characters.

To explain further, Christie created fictional writer Ariadne Oliver, who is described as “one of the foremost writers of detective and other sensational stories.” Thought to be a fictional version of Christie herself, she appeared in six Poirot novels and also in The Pale Horse.

As Christie had Poirot, so too Oliver had Sven Hjerson, a pedantic Finn with whom Oliver had a strained relationship, mirroring Christie’s own thoughts of Poirot.

In this new series, which launches on Nordic streamer C More on Sunday, Hjerson has been transformed into a Swedish former criminal investigator who has solved some of the toughest cases in his country’s history. Now something of a loner kicking his heels in retirement, his life mainly consists of daily routine, a vegan diet, collecting records and an unhealthy appetite for gossip.

Klara Sandberg is a reality TV producer living with her partner Niklas and their daughter Olivia. With her career stagnating, Klara is looking for something new. When she successfully pitches an idea for a new show starring Hjerson, it could be the solution to her problems. But there’s one major hurdle – she’s never met him.

The eight-part series then revolves around four classic whodunnit murder mysteries as Hjerson and Klara find themselves as an unlikely detective duo. It is produced by BR•F in coproduction with German broadcaster ZDF, Nadcon, distributor ZDF Enterprises and Agatha Christie Ltd.

“I liked the character immediately,” says Johan Rheborg (Solsidan, Partisan), who plays Hjerson. “I haven’t done anything like this in my career before so it’s completely new. The fictional writer doesn’t like Sven and that also appealed to me. He’s a bit of an oddball. I immediately felt I wanted to defend him and create a character who is more alive than classic Scandi noir detectives, who are almost always depressed. This is a guy who has hidden fire inside him until he meets Klara and then actually experiences some fun in life.”

Like Hjerson, Klara finds herself stuck in a routine she wants to escape, but she is more aware of that than he is. “She wants to develop herself, she wants to go further in life,” says Hanna Alström (Kingsman: The Secret Service), who plays her. “There were a lot of elements that attracted me to the show. It wasn’t just Klara, the character. It was Agatha Christie and the chance to work with the directors and the whole package. Playing her, I feel free. That’s the main thing I like about Klara.”

The two actors met for the first time ahead of production, each nervous that they may not get on with their co-star. “But I met Johan and it was so lovely from the beginning,” says Alström. “We filmed the series chronologically, so me and Johan got to know each other at the same pace as our characters. That was a very positive thing for us. There was a lot of fun and a lot of hard work.”

The process included some early meetings and workshops where they got to know each other and their characters. And though Alström joined the project late on, “it was a perfect match when she showed up,” Rheborg says.

“It’s always the case when you do film or TV that you more or less get thrown in front of the camera and have to start working together. But we worked a lot to make these characters interesting and a couple that people will want to join and follow. They’re both outsiders, in a way. We’ve taken the Agatha Christie umbrella but, seeing as it’s a spin-off from a fictional character’s fictional character, it’s also liberating. We can develop this ourselves. We worked a lot as a team, me and Hanna, when we were on set with the writers, fighting for our characters. We’ve been involved more than usual.”

Central to their discussions was the relationship between Hjerson and Klara, with each character finding themselves drawn to the other through a magnetic yet unromantic connection.

“We were talking very much about their relationship and why they were hanging out,” Rheborg explains. “I was obsessed with finding out why he doesn’t just turn the other way. Why does he follow her? What is it about Klara that actually attracts him? I worked a lot with that because they are an odd couple and I really wanted to work on what detailed specifics got him fired up about her.

“As I see it, he’s totally in love with her – not in a classic way, but it’s something you can experience when you meet someone. I tried to find that, and it was a lot of working with the script, with the scenes and on set.”

Rheborg says the importance of Hjerson’s relationship with Klara is further put under the spotlight when he becomes involved in her “silly TV show,” with the character finding he doesn’t want to ignore her offer because that would mean also saying goodbye to her.

“That’s part of the game they play between them,” the actor continues. “It’s always nice to have something to talk about when you find someone you like and don’t want to get into a discussion with them about how you feel. It’s very nice and convenient to have a project on the side you can talk about instead. He’s extremely bored in retirement; he has created his own world where he feels like, ‘This is the way I want to live my life,’ and it’s kind of boring after 10 years. He’s disliked by so many people; he’s an oddball and not socially skilled. But when he meets her, something different happens to him and it’s a fun path for him to walk.”

For Klara, Hjerson is initially just a way for her to get her career back on track, but the discovery of a deeper connection between them is something unexpected for her too. “She wasn’t planning to do a project with Hjerson. It was something that just popped up in the moment,” says Alström. “But after a while, she sees something in him she really likes. She falls in love with him, but not in a sexual way.”

Had Hjerson been a major character in the world of Agatha Christie, Rheborg says he would have had to become a Christie scholar to play him, as he might have done had he been cast as Poirot. But with Hjerson, he had freedom to make the character his own.

Filming took place in Åland, an island off the west coast of Finland, from December last year until May this year – a schedule that exposed the cast and crew to freezing temperatures during the show’s numerous night shoots.

“There were a lot of scenes shot near the ocean and it was unbelievably cold close to the water because of the wind and the snow,” recalls Rheborg. “We didn’t have any winter clothes. The clothes we were wearing were not winter clothes at all, but they looked good so we had to wear them. It was worth it. It took a lot of energy but it gave so much, visually, to be there. It’s fantastic place to shoot. We haven’t done much TV in Sweden at Åland. It’s never used. Nobody films there for some reason, so it’s even exotic for us, even though it’s very close.”

Despite the unwelcoming conditions, the quirky relationship between Hjerson and Klara exemplifies the show’s playful tone and light humour, despite the murders they encounter along the way.

“We want it to be entertaining, fun, warm and not so stiff,” says Rheborg, who hopes the show will return for a second season after its debut on C More this Sunday and then Swedish network TV4 on August 24. “It was fun to do and we have so much more we can do with this. It feels like we have discovered our own take on Agatha Christie here, and we would love to continue and develop this show in the future.”

“There’s a lot of playfulness, but something like [2019 big screen whodunnit] Knives Out is also playful. I hope viewers like it,” adds Alström. “I would love to meet Hjerson and Klara again and be in this world again.”