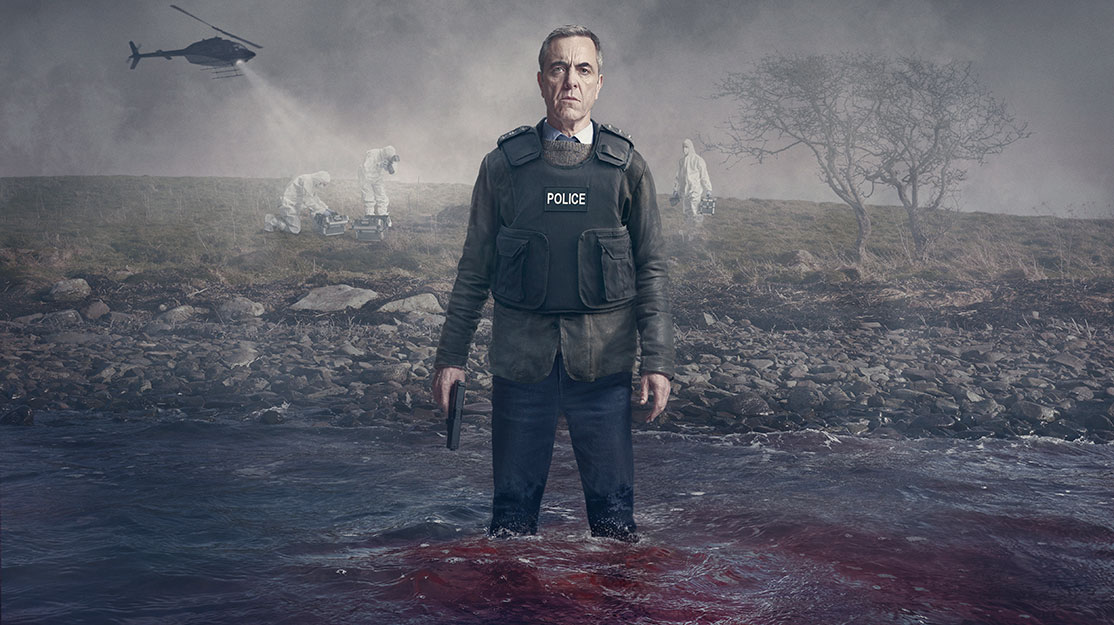 Chris Brandon discusses the journey towards writing his first television series, BBC thriller Bloodlands, and partnering with Line of Duty’s Jed Mercurio on this story of a Northern Irish police officer investigating a cold case with huge personal significance.

After working as an actor for more than a decade, Chris Brandon earned his first television writing credits in 2015 on Irish drama Red Rock. He’s now set to see his first original series arrive on the small screen after partnering with Line of Duty and Bodyguard executive producer Jed Mercurio for four-part thriller Bloodlands.

Starring James Nesbitt (Cold Feet) as Northern Irish police detective Tom Brannick, the series opens as a car containing a possible suicide note is pulled out of Strangford Lough. Connecting the incident to an infamous cold case, Brannick reopens the investigation into an assassin known only as ‘Goliath,’ leading to a cat-and-mouse chase with enormous personal stakes.

Goliath was suspected of being behind the disappearance of several controversial figures on either side of the conflict leading up to the Good Friday agreement in 1998, which signalled the end of The Troubles. Not wanting to rock the peace process, the police swept the case aside. But with Brannick believing his wife was among Goliath’s victims, he now sets about solving the mystery once and for all.

“It was a story I came up with about six or seven years ago. I wrote a spec script and then gave it to my agent, who really liked it, and then she put it in front of a few people,” Brandon tells DQ from his home in London. “For a while, it was a script that was getting me some nice meetings – and then Jed read it. Because of his knowledge of Northern Ireland and the lie of the land there from filming Line of Duty [in Belfast], he was really the first person to say, ‘Let’s do this.’”

Bloodlands then became the first project from HTM Television, Mercurio’s fledging production banner established in partnership with Hat Trick Productions (Derry Girls, Flack). Distributed by Hat Trick International, it was developed for several more years with Hat Trick executive producer Mark Redhead as a six-part series before the BBC signalled that it wanted the show, but as a four-parter.

“That meant remodelling the story a little, so we were able to do that and write a first episode,” Brandon recalls. “The BBC liked that and they wanted to see a second episode to see if there was consistency of storytelling. They liked that, and then building that story with Jed and Mark was brilliant.”

Brandon was born in England but grew up in Northern Ireland and went to university in Dublin, so he is extremely familiar with the geography and history of the island of Ireland. In Brannick, he wanted to create a character that could personify Northern Ireland and the modern-day challenges and conflicts it faces.

“One job of a police officer in Northern Ireland is to keep the peace and the other is to look for justice,” he says. “In Northern Ireland, those butt against each other specifically, so it was about trying to contain that within a single character. Then it was a case of laying on top of that the personal significance of his wife’s disappearance, the hope he places in the life of his daughter and the personal stories of the people around him. The story starts to gather some momentum there, and then it’s just a question of structuring it in the best way possible to tell that story.”

With Mercurio shepherding the project, it’s no surprise that Bloodlands has more than a few twists and turns. Brandon says the series was plotted episode by episode to ensure the first hour ended at its intended destination before then setting off on the next chapter. That method allows writers a certain amount of wiggle room, he says, because plots can change course more easily than if the entire story were set in stone, but can still build to a strong, no doubt heart-racing conclusion.

“The most important aspect of telling the story [of Northern Ireland’s history] was to tell it in a way that didn’t alienate anybody from the universal aspects of the series, which are what we do for love, how we react to injustice and the importance of peace,” Brandon says. “Being able to handle those large themes while still walking a fine line of portraying everything with that sense of balance was really interesting. It’s not a documentary or a think piece. At its heart, it’s a thriller, but it’s about using that thriller structure at times to ask interesting questions.”

Brandon describes working with Mercurio as “an absolute privilege,” while he also picked up one piece of valuable advice that proved particularly useful during filming in Northern Ireland, where the weather can change in an instant: always have an excellent set of waterproofs.

“It was a complete education in that he guided me through the process of writing,” he says. “Then when we were in production, he was great in saying, ‘You should come to set,’ which is probably not always something writers do. I would get involved as much as possible. Learning the dynamics of a crew, how they all work and really seeing how that production works almost from concept to execution was where Jed was incredibly generous with his time.”

As an actor, Brandon has experience of working with various writers and their different approaches to character. Now as a writer himself, he believes no part should be wasted.

“Every part should have some kind of validity within the storyline and should certainly have something to chew on for the performer,” he says. “Maybe that’s me just getting scripts over the years and going, ‘How do you want me to put that tray down?’ or ‘What do you want to me to do with those glasses?’ I really enjoy getting a bit of meat to everybody.”

In Bloodlands, no actor has more screen time than Nesbitt, with Brannick seen juggling his case work with police politics, his relationship with his daughter and the grief he still feels over the presumed death of his wife.

The Northern Irish actor was “far beyond my wildest expectations,” Brandon says. “He was fantastic from the get-go. He came on very early with the idea; he was very keen to work with Jed but he really liked the idea, which was a huge compliment. He was just great. It’s a fantastic performance. He knew, moment to moment, what he was doing, which is a hard thing to do when it’s a very twisty, turny plot. We were very lucky with the actors across the board. But the story hangs off James and he is really excellent. It’s a complicated, nuanced performance in what is a complicated, nuanced storyline.”

With Mercurio’s advice ringing in his ears, the writer says one of the biggest challenges facing the Belfast shoot – overseen by director Pete Travis and producer Christopher Hall – was the weather, which can go through all four of the seasons in the space of a few hours. Production was also able to be completed just before the coronavirus pandemic brought a halt to film and TV shoots in the UK last March.

“It’s a very hard thing to handle when weather stops filming altogether or dictates how you’re going to work,” Brandon continues. “For me personally, and from a writing point of view, it was always the case that if you’re excited to do the work then you do the work and then there’s no challenge that’s going to get in the way of that. That was always the feeling, to go for it.”

Ahead of the show’s premiere this Sunday on BBC1, Brandon promises viewers a rollercoaster ride filled with plenty of twists, turns, intrigue and fascinating characters to watch along the way. And with Mercurio behind the scenes, you wouldn’t expect anything less.