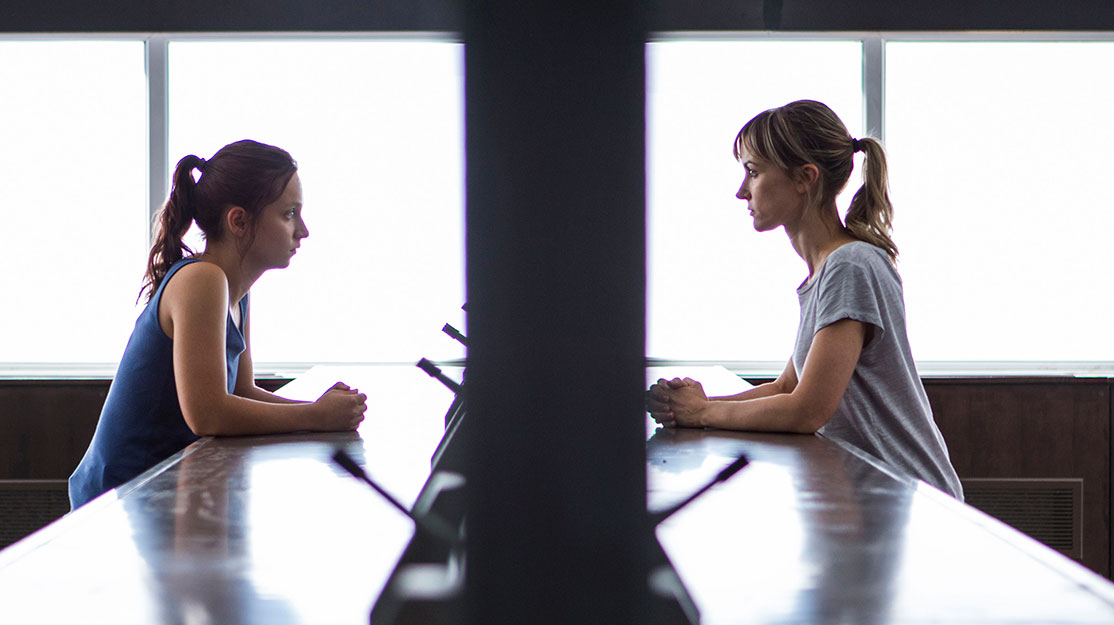 Katherine Kelly and Molly Windsor star in a ‘cat and cat’ struggle triggered when a lecturer suspects a student of cheating. The actors, director Louise Hooper and writer Gaby Hull reveal how they keep viewers on edge in this four-part thriller.

In the opening scenes of ITV’s new thriller Cheat, sociology lecturer Dr Leah Dale (Katherine Kelly) is giving a definition of power, power dynamics and coercion from the pre-eminent philosopher Bertrand Russell. Apart from setting up one of the central themes of the ensuing drama, it remains one of the only things that is definitive in the rest of the episode.

Cheat twists and turns and jumps around in time from the opening minute and doesn’t ever really allow the audience to settle. Light relief and levity is in short supply, and when it does come, it is quickly supplanted by more tension.

Ostensibly, the four-part series is about an open-and-shut case of academic deception. Average university student Rose Vaughan, played by Three Girls’ Bafta-winning star Molly Windsor, pops up with a first-class dissertation, setting off alarm bells in the head of academic integrity advocate Leah. While department head Harriet (Neve McIntosh) is won over by Rose’s charm and plea of innocence, Leah is spurred on to expose her as a cheat, setting off a malevolent competition for supremacy between the pair. Meanwhile, Leah seems to be caught in a loveless marriage with her academic husband Adam (Tom Goodman-Hill) who is desperate for a baby and has also been won over by Rose.

Cutting to the present, Adam’s cold and lifeless body is lying on the pathologist’s table while Rose and Leah face off either side of the partition glass in a police visitor room. Detectives are seen questioning whether they have apprehended the real killer, while the audience is left thinking, ‘What the hell has gone on here?’

It comes as no surprise that Cheat is the product of fraternal writing and producing duo Jack and Harry Williams and their prodco Two Brothers Pictures, with distribution handled by All3Media International. Fresh off the back of relationship/crime thriller Liar, also for ITV, and time-shifting Rellik for the BBC, Cheat has all the hallmarks of a tension-filled Two Brothers romp, with many questions unanswered as the audience struggles to work out who to trust. That’s just episode one.

“We’ve left it purposefully open. It’s not the on-the-nose show where you are told where your sympathies should lie,” Kelly (Strike Back) tells DQ after a press screening of the first episode. “Especially by this stage in watching and in lesser hands and with safer choices, you would think your sympathies would lie with me. And the fact they don’t is testament to how hard we worked at that. We were brave enough for the audience to not like us. I don’t want to watch dull certainty, I want to feel an emotion. I want a bit of the audience’s soul, whether it’s with utter detestation and repulsion or total affection and understanding.”

Director Louise Hooper (Vera, Stan Lee’s Lucky Man) says the creative team was intent on making Cheat stand out from other crime dramas with its dichotomies and layers. “We didn’t want to put our flag in the sand and say, ‘It’s this.’ It should be mercurial. It shifts, it pulls and it shifts again, and that’s how it should be,” she explains. The whole point is you don’t know what it is. You’re thinking, ‘Is Rose being a sarcastic bitch or is she being genuine?’

“It’s about all the dark, slippery and wrong emotions that you pretend you don’t have, but everyone does, and they’re the ones that get you into trouble. It’s not a normal thriller/cop show where police cars come in and there’s a dead body; it’s about normal people in this rarefied world of academia and all those feelings about not quite fitting in, feeling jealous, frustrated, and they start to build and build.

“I like that idea of being slightly counter-intuitive with thriller. It feels hot and hazy [at the start], but the underbelly of it is dark and dangerous with all those horrible emotions bubbling.”

The duel between Leah and Rose is chivvied along by an impressive performance from Goodman-Hill as the supercilious, fractious, exasperated and occasionally caring Adam. And in keeping with Cheat’s plan to confound viewer loyalties, you don’t feel the utmost sympathy for the character when you see his corpse lying in the morgue. Peter Firth (Spooks) and Lorraine Ashbourne (Jericho) add to the ensemble with typically divergent parental advice as Leah’s academic mum and dad.

However, it is Kelly and Windsor who are the focal points, their characters’ interactions laced with menace and throwing up signals of sexual allure, obsession, jealousy and certainly some mutual respect.

According to Hooper, director of photography Ed Rutherford wanted to make sure it was a real “cat and cat” relationship, rather than cat and mouse, pitching the main actors against each other, with both “tough as nails, like two boxers in the ring.” Windsor says her portrayal of Rose, therefore, had to be instinctive in places to feel as authentic as possible.

“People are so complex. You have to go into their thoughts and beliefs, because as humans we have thoughts and opinions about everything. So the research never really ends. In terms of doing the job and shooting it, you have to learn your lines. They’re a bit like bullets in a gun that you can’t fire until you’re doing the scene, and you don’t know if that’s going to work or it’s going to misfire. Going in with good writing, directing and great actors, it’s more fun to stay open-minded and work with each other than to work with a set ‘this is what I’m doing.’”

Kelly agrees, adding: “You can’t really go into this with a mindset of how it’s going to play out because both characters are challenged in every single scene. All I did was do my homework in terms of I didn’t go to university, I just wanted to check in – not just with that world, but what that world’s like now – and make sure she looks right and her home feels real and feels authentic.”

Dramas set in the world of academia often find themselves facing criticism, with scholars quick to take to social media to vocalise any unrealistic televisual portrayals. That Leah does not have a permanent role at her university but lives in a palatial detached house will likely raise a few eyebrows, as might Adam’s casual attitude towards a multimillion-pound research grant proposal. Hooper acknowledges she wanted to make Cheat feel “slick and cinematic” but also to maintain as many true-to-life elements as possible.

Additionally, the inspiration for the story sprung from a similar case of real-life cheating brought to writer Gaby Hull (Benidorm) by an academic acquaintance. Although this was originally used as a guiding light for the series, Hull says it became more of a springboard into interpersonal relationships.

“Originally the script was based in academia and university politics, but we pulled back on that because we wanted to up the personal/thriller genres. The themes on the surface are of integrity and standing up for what you believe in, but there’s lovelessness and the destructive power of it. No one wants to hear four hours about an essay,” he jokes. “But I didn’t consider the academics. Hopefully there aren’t enough of them to cause a real fuss!”

As Hull indicates, academia is a handy launchpad for the twists that follow in Cheat, which was screened at Berlinale last month ahead of its ITV launch next Monday. By the time episode one ends, audiences quickly realise that the answers they’re seeking can’t be found in a textbook.