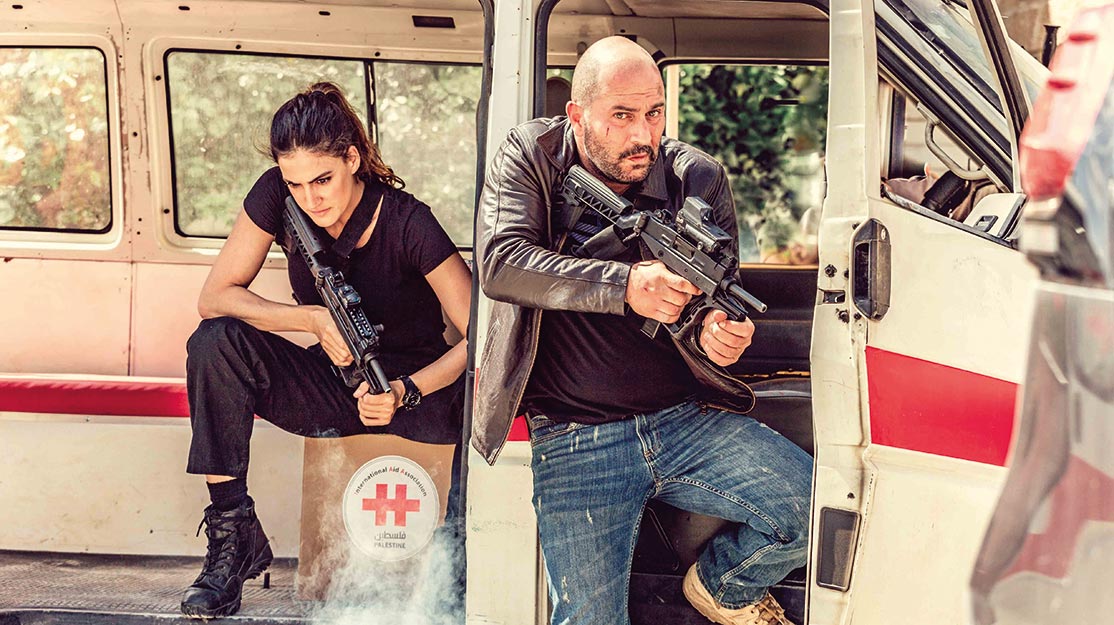 Now in its third season, Fauda has pushed Israeli drama into a new direction by exploring both sides of the Israel-Palestine conflict, presenting an action thriller tinged with emotion and compassion. DQ chats to the show’s creative team.

While there’s no disputing that Israel has become an influential and celebrated hotbed of acclaimed TV drama, it’s notable that many of its series have had to wait until being adapted overseas before breaking out internationally.

Prisoners of War famously became Homeland on US premium cablenet Showtime, while BeTipul has been remade more than a dozen times around the world, most prominently as In Treatment on HBO. Other US translations include Hostages (CBS) and Euphoria (HBO), while BBC drama The A Word is based on Yellow Peppers, Netflix’s The Good Cop comes from an Israeli show of the same name and Showtime is currently producing Your Honor, a new take on Israel’s Kvodo.

One Israeli show that hasn’t been remade – yet – but has earned rave reviews worldwide is Fauda (Arabic for ‘chaos’), which entered its third season at the end of 2019.

The action thriller, based on the experiences of creators Lior Raz and Avi Issacharoff, follows a team of elite Israeli undercover agents as they work to apprehend Hamas activists in the West Bank. Uniquely, however, the series dramatises the complex Palestinian-Israeli conflict from both sides to provide a new perspective on life in the Middle East.

Seasons one and two introduced Doron, the commander of an army unit chasing terrorist Taufiq Hammed, known as The Panther. In the third season, Doron is deep undercover in the West Bank, posing as an Israeli Arab boxing instructor at a sports club belonging to a low-level Hamas member. But following the kidnapping of two teenagers, he and his team find themselves in unfamiliar territory – Gaza.

The new season has already proven a hit locally on Yes TV, while it will air internationally on Netflix. The co-creators say they were caught off guard by Fauda’s success overseas, just as they had been when Yes originally gave them a chance to tell the story. “At first, we didn’t think people in Israel would like the show, because we went to all the broadcasters and nobody wanted it,” says Raz, who also stars as Doron.

“Yes was the only broadcaster that actually wanted to invest in us. We are two guys from Jerusalem who hadn’t written any scripts in our life. It was quite a gamble for everyone.

“Neither of us thought people would watch a show in Arabic and Hebrew if they were not Israelis or Palestinians and didn’t know about the situation here in Israel. So it caught us by surprise. People just connect to the story and the characters, and that’s what’s amazing.”

The pair have known each other since they were teenagers. Having served together in the Israel Defense Forces, they were reunited at a military event eight years ago. When actor Raz revealed his ambition to write a series about life in army units and the mental price soldiers pay for their actions, he discovered his goal was shared by Issacharoff, who was then working as a journalist across the Middle East.

“The magic between us is that both of us bring something to the table,” Raz says. “Both of us were also in the army and participated in a lot of operations, so both of us know the action. I’m an actor so I’m connected to more of the emotional journey of the characters.

“Now, in the third season, everything is mixed. I learned about the politics and Avi learned about emotion and story. Now we’re working together very well because of it. We’ve learned a lot from each other.”

Many of the stories featured in the show are based in reality, through either the writers’ experiences or stories they have heard as they try to blend action with emotional drama. “There are so many stories we’ve taken from reality and fictionalised and made them bigger or made them smaller,” Issacharoff explains.

“You play with a lot of material and you try to make it as realistic as possible to give the audience a sense of, ‘Wow, is this real?’ Many people ask us the same questions: ‘Did this happen for real? Is Fauda real?’ Of course it’s not real, it’s a drama, but we try to give the sense that maybe it did happen.”

Supporting Raz and Issacharoff in the writers room for season three was head writer Noah Stollman (Our Boys), with a new scribe assisting the duo each season. “Lior will yell, I yell back, Noah is also trying to yell but he cannot compete,” Issacharoff jokes of the writing process. “We fight and we argue and something good comes out of that.

“But we’re not fighting all the time – we’re also having fun. We encourage mistakes and saying whatever you want. We say don’t be scared or intimidated by anyone. We’ll choose if it’s good; everyone makes that decision. It’s quite like a Kibbutz, a community, not like someone is running the room. We all are.”

The decision to switch the action in Fauda from the West Bank to the Palestinian territory of Gaza in season three came out of a desire to change the direction of the series, though the creators say that, rather than being at the heart of the story, the new location simply serves as a fresh arena for the characters.

“It’s really different compared with what we know from the West Bank, and the whole experience from the Israeli audience is that Gaza is a black hole,” Raz notes. “We don’t know what’s happening over there. We only hear about it when rockets have been shot from Gaza. Just like the journey where we took the Israeli audience into the West Bank, we have tried to have a look into Gaza and what’s happening there.”

Behind each season of Fauda is an aim to send Doron to places that push him to his emotional and physical extremes, until he a reaches a point where he understands something new about himself and the world around him. “It’s not easy. Everything is very extreme with Fauda so you have to be more extreme in a way,” Issacharoff says. “We just wanted to go deep into the characters themselves, their lives and the people in his crew and the Palestinians. There are a lot of challenges writing a third season because you don’t want to repeat yourself.”

One of the biggest tasks was recreating Gaza, with filming restricted in the territory. The solution was to transform an Israeli military training base. “Where to shoot was a real issue because we couldn’t film in Gaza. We had to recreate Gaza,” says Danna Stern, MD of Fauda producer/distributor Yes Studios. “Even when we shot season one and two in the West Bank, we shot Arab villages in Israel. There are Arab Israelis and villages within our borders.

“For this season, we went to an army base where they use sets to replicate Gaza for training purposes, so we got to use those. They built a set of houses, alleys and shops to imitate Gaza. But getting sets and finding locations to film is always something you can manufacture, especially in television. It’s really about getting the story right. You then work backwards and look at how you’re going to film and what you’re going to need to make it happen.”

As Doron, Raz leads the cast. Initially, however, he was more interested in playing the show’s main antagonist, Taufid Hammed, in season one. “But then I fell in love with this character and we started to write Doron for me,” Raz says.

“But I still had to audition for this role along with other Israeli actors because, after Yes invested so much money, they wanted to know we were in good hands with the lead actor. I’m happy I did it because it took away the pressure I probably would have had if I was just coming there as the writer who wrote a role for himself.”

With a much more emotional storyline featuring in season three, Raz and Issacharoff say that while the show might not strictly reflect their own experiences, everything continues to be rooted in the reality of their lives and society around them. “Some of the scenes I watched, you feel like someone has punched you in the stomach,” Issacharoff asserts.

“You feel the pain and the way the characters are going through the journey – on both sides, not only the Israeli side. The way you can empathise with the Palestinian side is even bigger in the third season, but the drama is so tragic; it’s a very tragic journey the audience is going through.”

With Stollman breaking the mould by returning for the fourth season, which is already in development, Raz and Issacharoff are now also producing an original series for Netflix and exploring other projects for TV and film. Meanwhile, Fauda will soon have its first remake, with an Indian version set to air later this year that explores the India-Pakistan conflict.

Stern believes Fauda’s international success comes down to the humanity behind the thriller. “Action is almost universal and that always plays well,” she says, “but the surprising element is the story isn’t one-sided. You have characters that are multi-faceted, who you love and hate at the same time. They really are equally sympathetic and violent on both sides.”